Creating a headliner superhero or supervillain is a lot harder than than the casual comic fan might realize. A worthy origin story is a must, some unique powers, a personality to set them apart from the rest, and typically, a nemesis or rival to define them in the larger universe… or, you can just make the character in question painfully cool, and let fans do the rest. Such is the case with Deathstroke the Terminator, a physically-augmented mercenary who’s been terrorizing the heroes of the DC Universe since his introduction – and whose star is rising as he joins the DCEU.

The days of Deathstroke being appreciated by the hardcore, and accepted as “cool” by the rest are coming to an end, with an appearance in Zack Snyder’s Justice League ahead of Ben Affleck’s solo Batman film. Not to mention his very own comic launched as part of DC’s “Rebirth,” diving into the earliest days of Slade Wilson’s shift from soldier to hired gun. So far writer Christopher Priest has stayed true to the accepted history of Slade Wilson, and the path of pain and torture that took him from father and husband to DC’s deadliest assassin.

But in the latest issue, the veil of secrecy has finally been lifted from the real meaning behind Slade’s ‘Deathstroke’ moniker, his signature weapon, and even the surprising origin of his trademark mask. 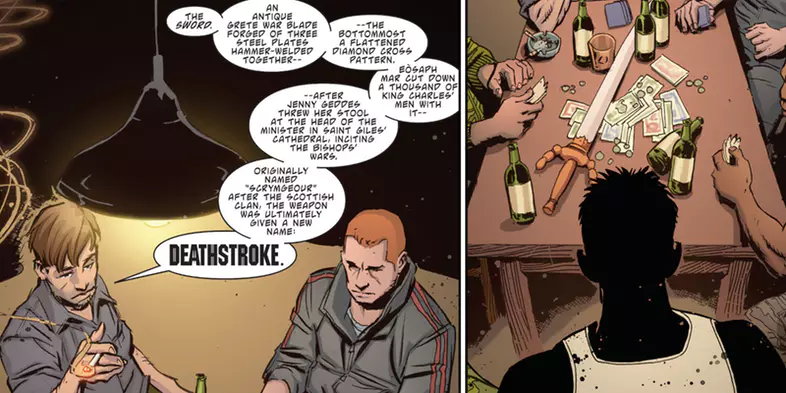 So far, Priest’s “Rebirth” of Deathstroke has taken some truly surprising turns, including a bounty placed on the head of Ravager, Deathstroke’s daughter, and even Slade and his trusted partner Wintergreen hunting down their former friends and killing them. But that’s all in the present day – in Issue #9, the story takes a leap backward in time, when the four men were still pursuing the same goal – a goal found in Srebrenica, a few years after the infamous genocide that took place as part of the Bosnian War (1992-1995).

Priest relies upon the historical context to frame Slade’s mission, but for now, we’ll stick to the changes made to the comic book origin story. The book doesn’t try to bury the reveal, explicitly opening on Slade’s colleague Fredric detailing the long and illustrious history of the centuries-old greatsword sitting in front of them. The classification implies the sword was forged during the age of the Crusades, named for the Scottish Clan Scrymgeour and used during the British Civil Wars of the 17th Century.

And before it found its way into the possession of the Croatian now adding it to the pot of a private poker game, it was given a new name: Deathstroke. And as fate would have it, Slade Wilson plays the winning hand. 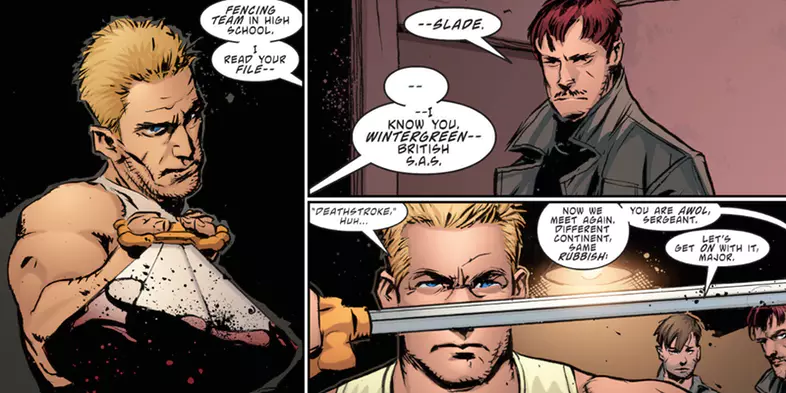 A sword with that much history is, obviously, a family heirloom. Which is why the Croat in question immediately accuses Slade of cheating, and tries to use the sword to exact his revenge. Slade manages to disarm the man out of frame and kill him instead, taking the sword as part of his fairly-won (as far as we know) winnings. With his skills revealed to everyone present, it’s made abundantly clear that the presence of an American in Srebrenica is no coincidence. And when Slade’s soon-to-be longtime ally Wintergreen arrives, the reason the men have gathered there is stated plainly.

The following day, a ‘General Dragas’ is to be transported through the city – the man responsible for the genocide committed against Muslim Bosnians. Wintergreen soon drops the act that he and his men are there following orders to extract Dragas, and admits that they are there for the same reason as Slade: the $5 Million bounty for the capture of Dragas. And with one of their men now dead, Slade steps into the open slot, preparing to intercept and extract Dragas for the payday – Deathstroke in hand. 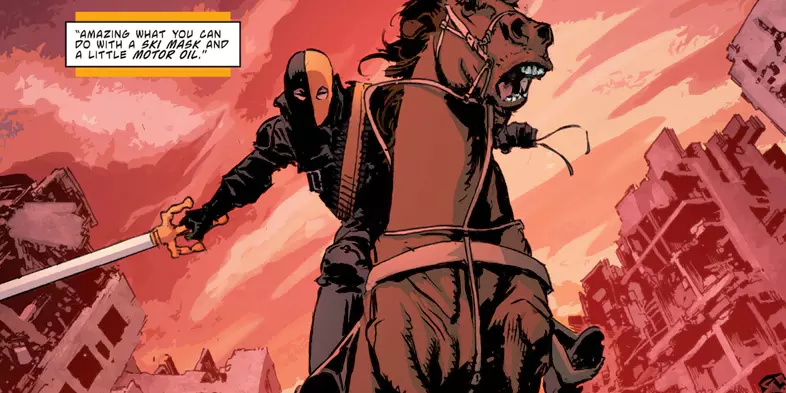 The scheme goes off without a hitch (for the most part), with Fredric and Rax attacking one of two United Nations trucks headed through Serbia. As they suspected, the U.N. vehicles and uniforms are simply a cover for Dragas’ men attempting to smuggle him to safety (avoiding the recent charges of war crimes). And as the two men subdue the accompanying forces, the man of the hour is left fleeing straight into Slade Wilson’s path. All Slade has to do is scare Dragas into changing his course – a goal he achieves with help from Deathstroke and, in his own words, “a ski mask and a little motor oil.”

The spectre of a “hellhound” suddenly bearing down on the men funnels them into a skull-shattering dead end, with Wintergreen making note of Slade’s flair for the dramatic (using a horse for the role, as opposed to a vehicle). The ambush soon takes an unexpected twist as one of the group is revealed to be a victim of Dragas’ genocide our for nothing but revenge, but fans know that Slade, Wintergreen, and the rest of their companions make it out alive. And Slade’s new sword and mask have already started the ball rolling on his coming career as a professional hitman/assassin/mercenary.

Taking the name ‘Deathstroke’ for himself is an understandable move on his part – and a clever way of paying homage to Deathstroke’s first appearances by Priest and artists Cary Nord and Jeromy Cox. Wilson obviously added some upgrades over the years – not the least of which is his new Ikon armor capable of withstanding Superman’s best punches – but his sword, mask, and bandoleer were there from the very start, as much a product of fate as necessity… and some motor oil.

This article originally appeared on Screenrant: The Secret of Deathstroke’s Name & Mask Revealed