The Wonderful Creatures of Wonderland 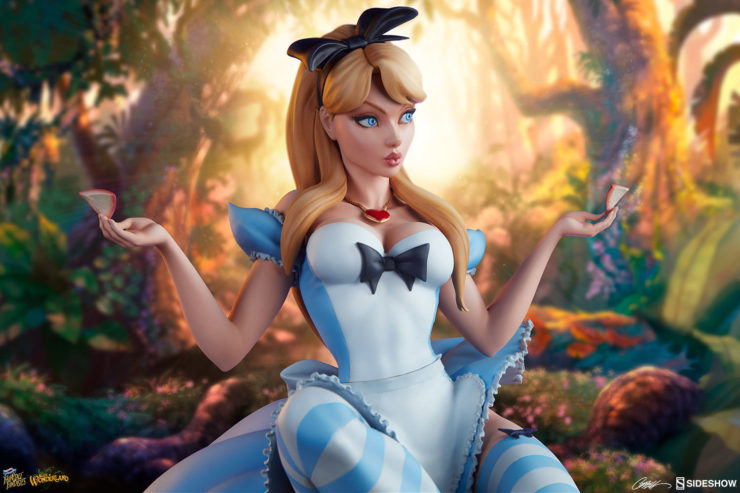 “Beware the Jabberwock, my son!
The jaws that bite, the claws that catch!
Beware the Jubjub bird, and shun
The frumious Bandersnatch!”

There have been countless reimaginings of Lewis Caroll’s Alice in Wonderland for over a hundred years. Many of these adaptations are vastly different, each one having a new and exciting depiction of Alice herself.  Some things, however, remain the same: Alice is a curious girl, and all the creatures in and around her adventures are absolutely, positively mad.

In Wonderland, all that you think you know comes into question. Not just about the ways of the world, but the very nature of how things exist. There are terrifying and all-the-while clever little creatures around each corner. Alice‘s story begins when she follows a very interesting and captivating creature down a rabbit hole. In her wonderful and absurd dreams, she finds a balance between nonsense and reason, as well as a few friends along the way.

Let’s take the time to get to know a few of these furry and ferocious animals that inhabit the wilds of Wonderland. 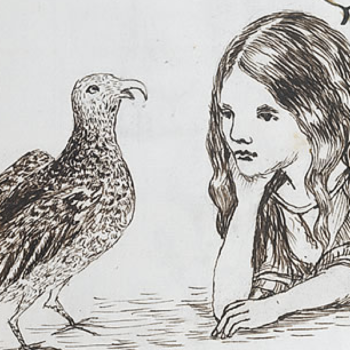 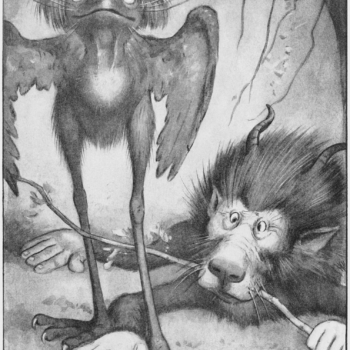 In the 2010 Alice in Wonderland movies, we see a proud and powerful Jubjub bird flying through the kingdom. He is strong and terrifying in the movie, but in his original depiction, he does not seem powerful at all. Why is that? And why should we beware?

There’s something very sinister about the long legs and piercings eyes of this bird. He sports whiskers like a cat, and a slightly-cocked hat. His appearance is confusing, and undoubtedly the Jubjub is deceptive. His gangly appearance might only hide his true powers of deception. Even the creature on the bottom right of the pictures appears to be afraid of the bird. 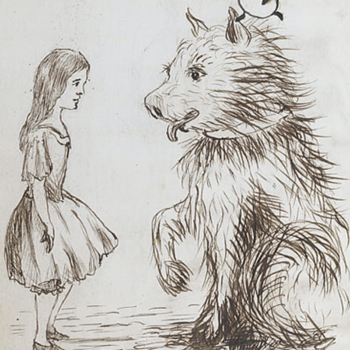 Speaking of that creature on the bottom right, that happens to be the Bandersnatch! It is, at least, Peter Newell’s original depiction of the Bandersnatch. Once again, Caroll never drew the Bandersnatch. He drew a large dog that was originally a threat to Alice. The dog, however, was easily distracted by a large stick and was eager to play.

This seems to be incredibly different than the Bandersnatch in the bottom right of the second photo. This strange creature seems to be part lion, part antelope, part dog, part monkey, and more. We are told, in Caroll’s poem, to shun him.

And it’s quite fitting that the Jubjub bird seems to be shunning the Bandersnatch, completely ignoring and partially blocking him. This Bandersnatch appears silly, especially compared to the terrifying creature from the movies. And yet, Newell presents us with a creature so absurd, that maybe it is his very absurdity that we must ignore. Maybe the Bandersnatch is past the point of acceptable silliness, though we don’t think Alice would agree with that one bit. 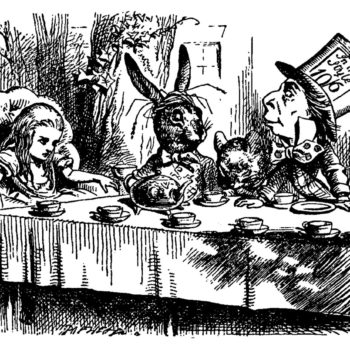 Silly takes its form in the shape of the March Hare, a rather looney and babbling creature. Yes, most of the creatures in Wonderland seem to understand Alice, but quite a select and special few can speak! The March Hare was frozen in an ever-lasting party by Time. And so, each day, the March Hare, the Mad Hatter, and the Dormouse celebrate with glee. They sing and dance and cheer for a wonderful daily holiday called, “The Unbirthday”. 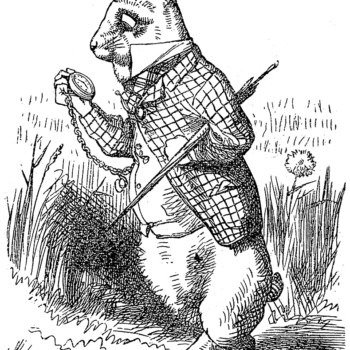 The White Rabbit, however, could be the apprentice of Father Time himself. He’s always keeping track of the time, though it seems not so well. He’s always hopping off. Late. Very late, indeed, this White Rabbit. And it always seems to be poor Alice who is making him late!

Alice could certainly learn to be punctual from someone like him. She could learn how to be a responsible roommate, even, as she does in Caroll’s original book. What you’ll never see is this White Rabbit relaxing. You’ll never see him simply kick his feet back and reciting poetry. No, that simply doesn’t fit his character. He’s not quite a philosopher. 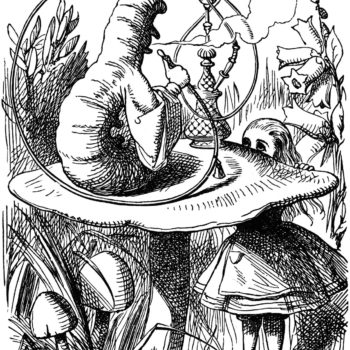 For philosophy, we can turn to Absolem the Caterpillar. He’s a beautiful blue caterpillar, who’s not any taller than 3 inches. Though he may be small in stature, he is by no means small in thought. He is quite the intellectual, who craves the companionship of poetry and the arts. You can find him on different mushrooms in Wonderland, often smoking some flavorful hookah.

He’s quite strict, and not particularly helpful when it comes to direct answers, but he is at least a friend to Alice. He asks her questions, and allows her to come up with her own answers. “Who are YOU?” asks Absolem.

This journey through Wonderland and all of its interesting creatures forces Alice to come to an understanding of herself and her own mind that she most certainly never had before. 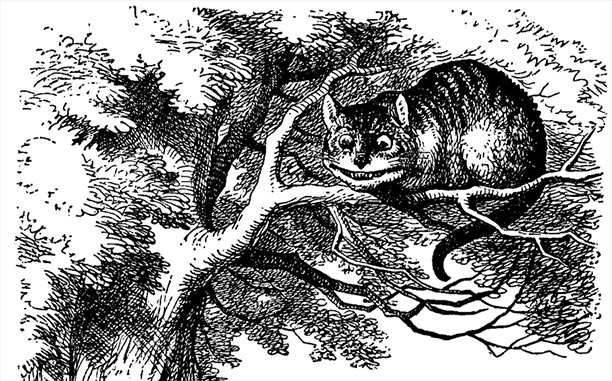 It is the Cheshire Cat who truly helps Alice find herself – and not just in the woods. The Cheshire Cat remains a friend to Alice through and through any and all adaptations. When Alice is hurt, he offers to lick her wounds. When Alice is lost, he points her in the right direction. When Alice can’t seem to understand anything at all, this flying feline helps her feel a bit more grounded.

The Cheshire Cat is the only one who truly listen to Alice, and helps her figure out her problems. He helps her figure out the rules and the ways of Wonderland. Together, they sort through the problems of nonsense and mayhem, and work together to save all of the other creatures of Wonderland, and get Alice safely back home. And just in time for tea!

You’ll never find creatures in the real world quite like the ones in Wonderland- with one exception! The Cheshire Cat can be seen in the Alice in Wonderland Statue from J. Scott Campbell’s Fairytale Fantasies collection.

What’s your favorite fairytale? Let us know in the comments, and don’t forget to Let your Geek Sideshow! 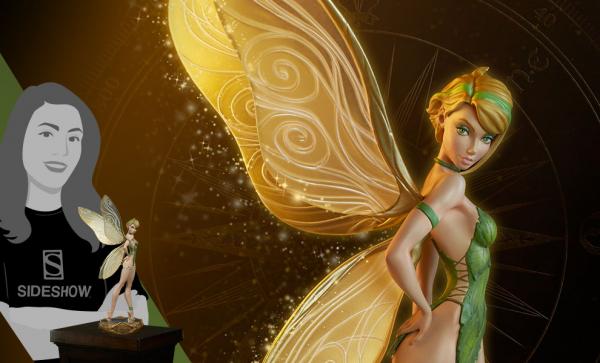