Dogs are the absolute best. They’re just doggone happy to be around you, even if you’re feeling down. But if you’re feeling pup for it, we’d love to share just a few of our favorite dogs in pop culture to celebrate National Dog Day today. And while they might not all be dogs, per se, they’ve got the same best friend spirit.

So as long as you don’t have a bone to pick, let’s dig right into our top 10 favorite dogs in pop culture. 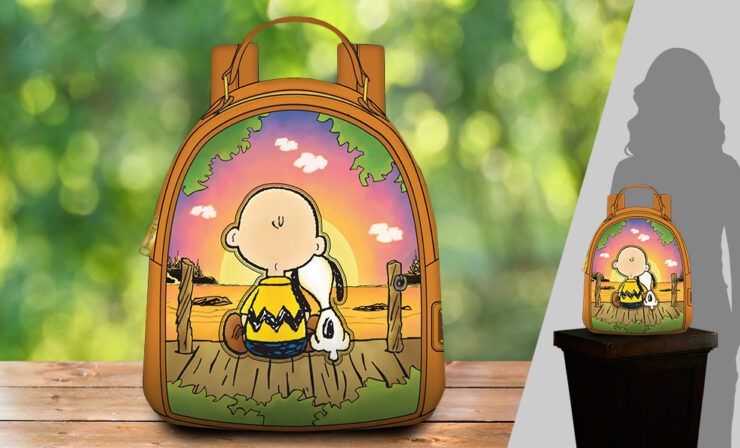 Enjoy this Charlie and Snoopy Sunset while you learn a little more about the history of the classic canine character. Let’s start with a fact you may or may not have known about him: Snoopy is actually a beagle! Furthermore, he was inspired by Peanuts creator Charles M. Schulz’s childhood dog Spike, and ever since he made his comic debut in 1950, he’s been an extremely important part of Charlie Brown’s story.

Snoopy is a silly character, constantly day-dreaming and fantasizing about the lives he could be living. He is a creative companion who writes multiple stories and is often typing up novels. He’s also known for a classic World War 1 style pilot, with a red scarf and aviator goggles. Through and through, whatever the story may be, Snoopy is a good friend and a good dog. 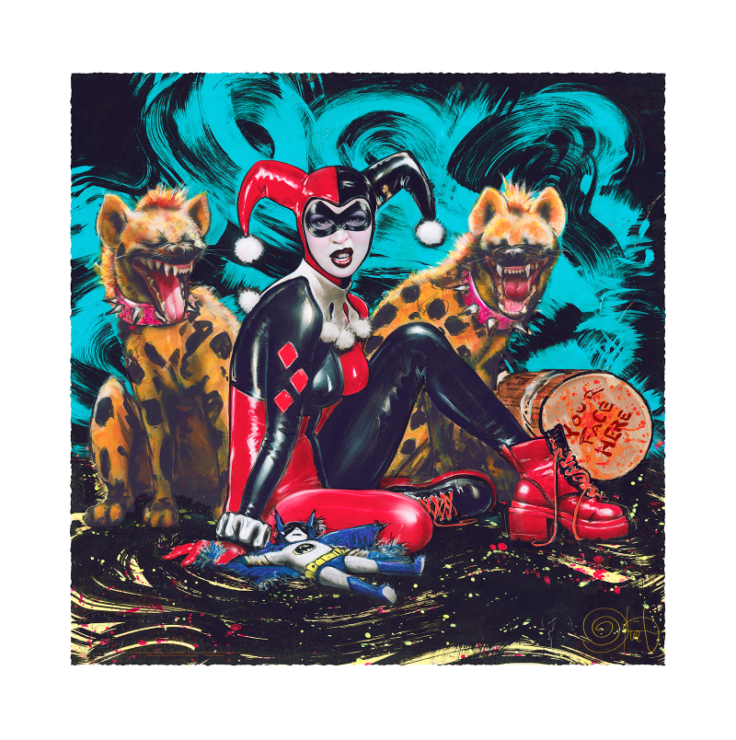 Bud and Lou are the heckling pet hyenas of Harley Quinn. These two loyal hyenas (which are basically dogs) have been featured in nearly every series with Harley, from Batman: The Animated Series to the video game Injustice 2. The laughing pair was named after the famous comedic duo Bud Abbott and Lou Costello, and in the Krypto the Superdog series, they live up to their names. The two hyenas are quite clever, both of them having personalities similar to Abbott and Costello.

These hyenas are so loyal that they help Harley Quinn fight in battle, they protect her from the Joker, and they love causing trouble for the other superpets. They even have their own giggle bubbles that work like a pet version of Joker toxin! 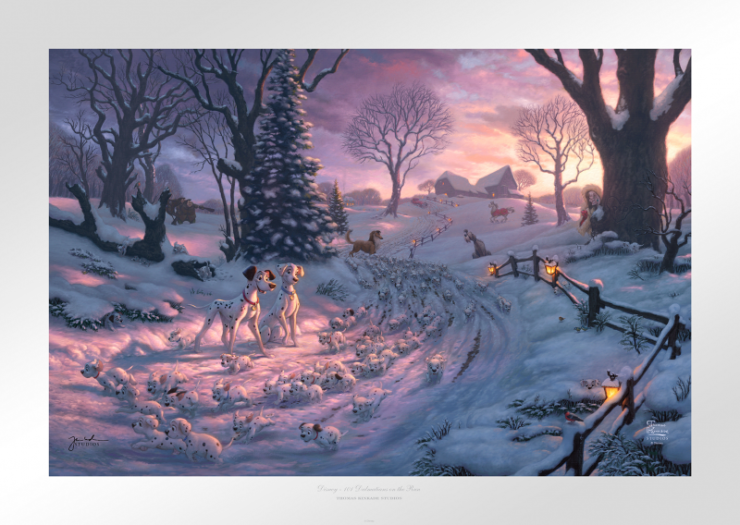 Pongo is the father figure and savior of all the 101 Dalmatians. The story was originally released as a book titled The Hundred and One Dalmatians in 1956 by author Dodie Smith. Just a few years later, in 1961, Disney adapted the novel into an animated feature film. The animated film would take a few creative liberties to make the story slightly more kid friendly, but the core of the story remained.

In the film, a young man named Roger and his Dalmatian, Pongo, both fall in love with a young woman named Anita and her Dalmatian, Perdy. Pongo and Perdy have a litter of 15 puppies, each of them with beautiful fur coats, that a certain sinister Cruella de Vil takes notice of. She will give (or take) anything to get another beautiful article of clothing, and it takes all of Pongo and Perdy’s power to save their litter and the 84 other puppies that Cruella already stole. 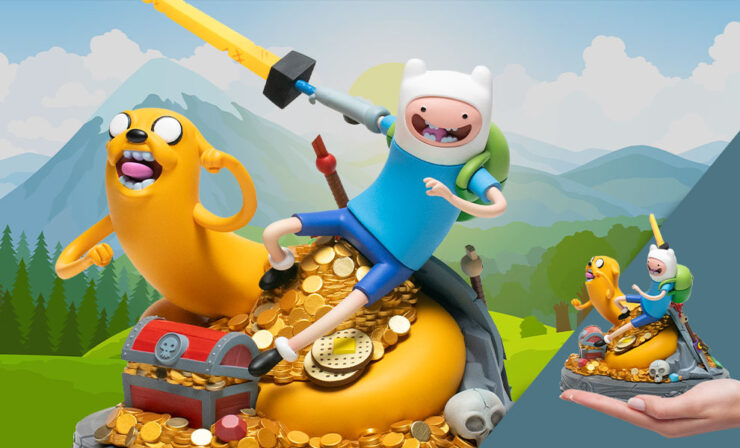 In the TV series Adventure Time,  Jake and Finn get into some crazy adventures, made all the crazier from the unique powers and properties of Jake the Dog. Originally created for Pendleton Ward’s Adventure Time series, made in 2008, Jake the Dog is Finn the Human’s best friend. He’s able to shapeshift to make any part of his body fit the needs of the situation. He’s often seen stretching to make himself extra tall, but he’s even made himself into armor for Finn to wear.

Most importantly, Jake is a laid-back dude. He’s creative and fun and inspiring, willing to give all sorts of good advice to his adoptive brother Finn. He’s always willing to give advice to his kids, though it’s not always the best advice. He has five kids that eventually become some of the most powerful and influential characters in all of the Land of Ooo. 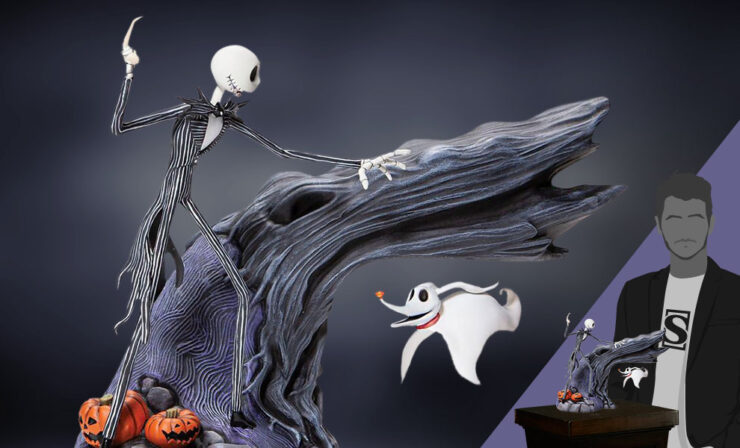 Zero is Jack Skellington’s pet ghost dog. At the end of his nose is an adorable little pumpkin that glows with delight! He’s always extremely happy to help Jack with any of his ideas, including his particularly strange and exciting ideas for this new holiday called Christmas!

His little sheet-like tail wags just like a dog’s tail, especially when Jack Skellington is telling tales. He cares about Jack being happy, and when it looks like Christmas might not go right, Zero does everything he can to save the day. He’s a very, very good boy. 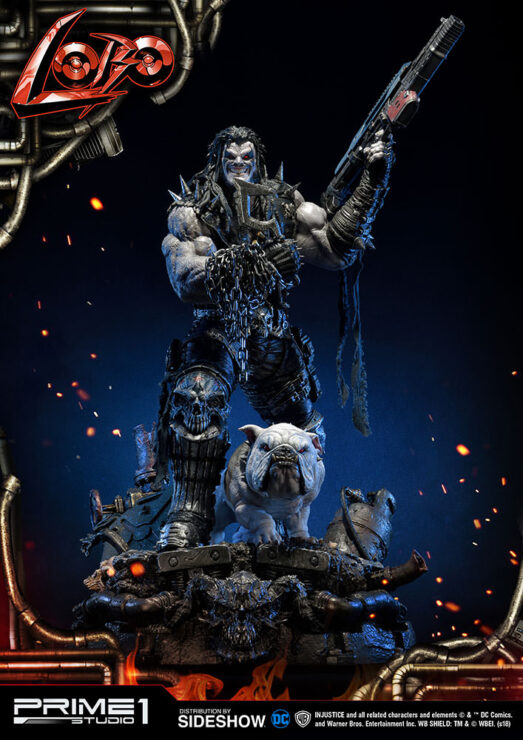 Dawg is Lobo’s bulldog. Dawg is not a terrestrial bulldog, but rather an alien of unknown origin. Dawg, being an alien, can survive in space just like Lobo. While not possessing Lobo’s invulnerability/immortality, he does have superhuman durability for the most part.

Dawg is easily recognizable by his iron cross dog collar and usually appears with a Band-Aid on his face. Lobo constantly denies that Dawg is his dog, especially when Dawg has gotten up to no good. He takes a liking to Harley Quinn and even saves her from drowning. 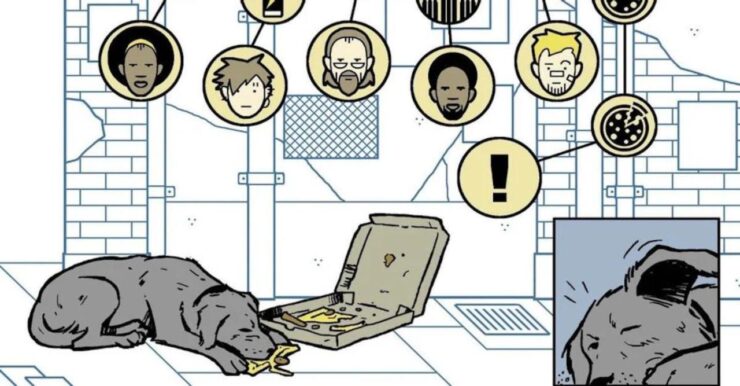 Call him whatever name you’d like — Arrow, Lucky, Pizza Dog — just be sure to call him a good boy! A recent creation, Lucky the Pizza Dog appeared in Matt Fraction and David Aja’s Hawkeye series when he was rescued from his owners by Clint Barton. Lucky belonged to the “tracksuit mafia” and actually turned on his masters after Clint showed him kindness. The dog was then beaten and thrown into traffic by the mafia men and barely survived until the Avenging Archer stepped in.

The dog recovered but lost his left eye. Then, Clint renamed him from Arrow to Lucky, and he joined both Hawkeyes (Barton and Bishop) on their escapades. Lucky even had an entire acclaimed comics issue dedicated to his point of view, where it was revealed he calls himself “Pizza Dog.” 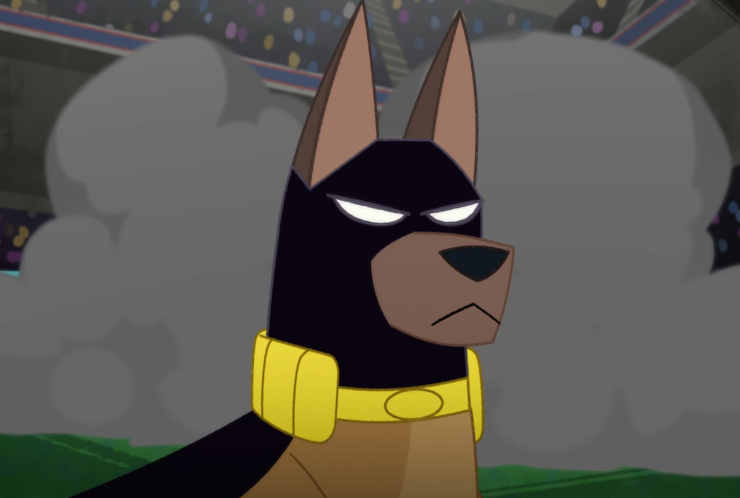 Ace the Bat-Hound’s creation was inspired by the success of another super-canine comic character, and both dogs debuted in DC Comics the same year: 1955. Also, taking cues from famous German Shepherds like Rin Tin Tin and Ace the Wonder Dog, the Bat-Hound joined Batman and Robin on adventures after Bruce Wayne found the lost dog and placed flyers around searching for his owner. 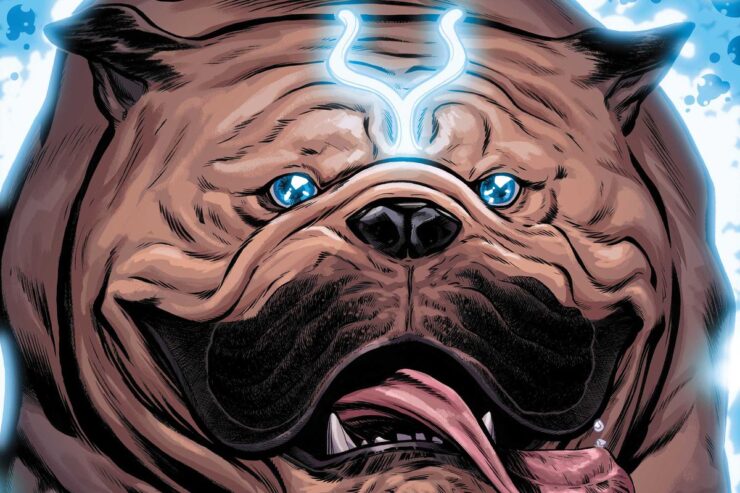 Lockjaw is the impossibly large canine companion to the Inhuman’s royal family. He was subjected to the process of terrigenesis in the womb, actually making him an Inhuman as well! Lockjaw has the ability to teleport and track scents at any distance. In fact, Lockjaw can teleport and track from other dimensions! He can teleport other people along with him and carry an extraordinary amount of weight along the way. He has teleported foes to the Negative Zone, in another dimension, and most frequently, he teleports the Inhumans back and forth between the Earth and their base on the Moon. 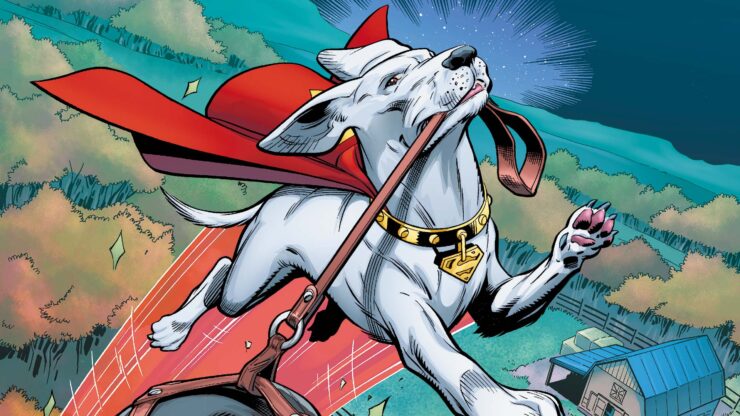 When it comes to super hero pets, DC’s Krypto can very well be considered Superman’s best friend. Krypto the Superdog is a white Kryptonian dog of no specified breed, though Krypton’s parallel evolution quite closely resembles that of Earth. He was Kal-El’s childhood companion, but during the destruction of Krypton his pod was knocked off course and eventually landed on Earth, reuniting with his teenaged master.

Due to Earth’s yellow sun, this alien dog has the same powers as an adult Kryptonian, just proportional in strength to a dog’s — these powers include super senses of smell and hearing, strength, flight, and occasionally super-canine intelligence. He even featured in his own self-titled animated series in 2005 and after making his live-action debut in DC’s Titans, he is a current fixture in season three.

Who is your favorite pop culture pup? Let us know in the comments, and don’t forget to Let Your Geek Sideshow! 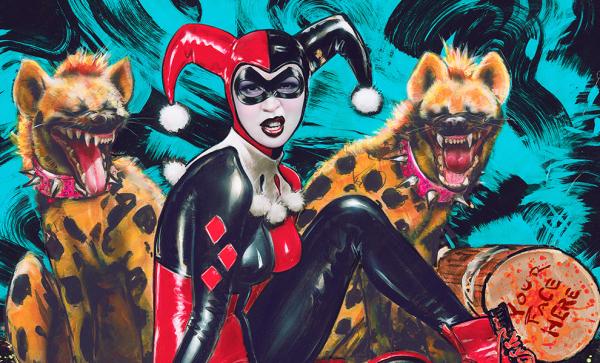 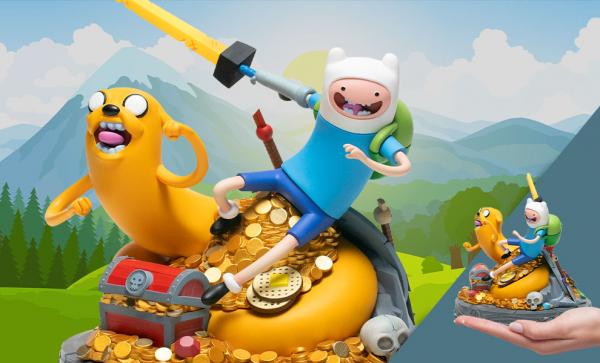 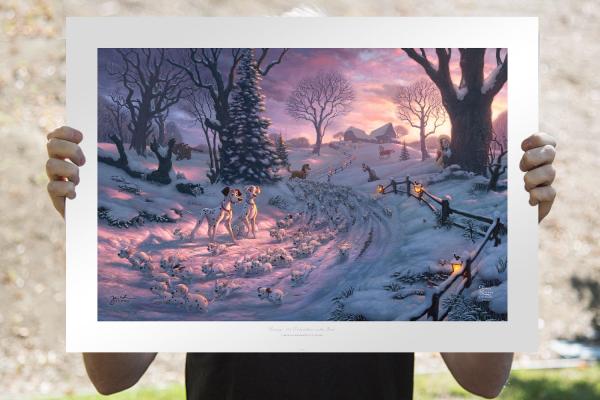 101 Dalmatians on the Run
Art Print 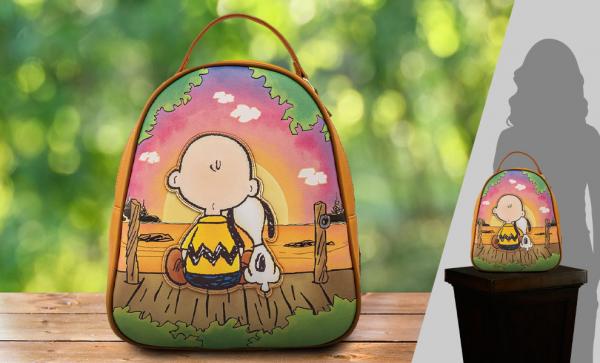 Add Some POP to Your Collectibles Display with Pop Art