For every hero, there is a gallery of goons that stands in their way. The mighty Thor is no exception, and given his mythical history, the hammer-holder has faced the toughest enemies of both men and gods within Marvel comics.

Thor has matched wits with witchy women, tackled tyrants, and stopped savage brutes from destroying the Nine Realms. Some of his villains are more famous than others, but together they create the challenges that put Thor’s worthiness to the test. That’s why we’re throwing the focus on the fiercest foes who have fought against everyone’s favorite thundering Avenger.

Based on the Greek god of warfare, Ares first appeared in Thor #129. Being another mythological hero, Ares has often squared off not only with Thor but also with Hercules, using his battle axe and his Olympian durability to his advantage. Hercules and Thor have even teamed up to defeat the God of War.

Ares was recruited to Iron Man’s side in Civil War, due to his strength and power being like Thor and Wolverine combined. Ares also joined Norman Osborn’s Dark Avengers alongside other villains pretending to be heroes, like Daken, Bullseye, and Karla Sofen.

Surtur, based on a character in Norse mythology, is a fire demon foe of Thor whose presence signals the coming of Ragnarok, the end of times. He comes from Muspelheim, and wields a giant sword called Twilight which can manipulate energy and open holes between dimensions. It was his sword’s power that once allowed Loki to transform Thor into a frog for a brief time.

His power is increased by the artifact known as the Eternal Flame, which can set his Twilight sword on fire. Surtur is over a thousand feet tall, and is weakened by extremely cold temperatures and environments. He is also considered one of the oldest beings in the universe, along with the Frost Giant Ymir.

From the evil realm of Svartalfheim, Malekith the Accursed is a fearsome mage who took the throne of his homeworld by force and violence. He often enlists the help of other foes of Thor, such as Surtur and Loki, in order to combat the thunderer. The Dark Elves respect him because their culture encourages fear and brutality, and Malekith is no stranger to these tactics. In the comics, he even leads a Dark Council, with Laufey, Ulik the Troll, and the Minotaur. Once, he cut off Thor Odinson’s arm with the man’s own axe.

In the Marvel Cinematic Universe, Malekith was portrayed by Christopher Eccleston. His desire for revenge against the Asgardians brought him to the Aether, one of the Infinity gems. One of his closest allies is Algrim the Strong, who becomes the malevolent creature Kurse in both the film and the comics.

Amora and Lorelei are two sisters who wield magic and use their powers to seduce men to do their bidding. Amora studied under Karnilla, Queen of the Norns, and grew a little reckless in her power. She’s also known as Enchantress. Odin dispatched her to return Thor’s affections towards Asgard and away from Earth, where Jane Foster was. She works with Skurge the Executioner to harass Jane Foster and to try to have the God of Thunder to herself. His hammer is immune to her magic, but Thor has not always been entirely unaffected by her charms.

Lorelei, Amora’s younger sister, is also a skilled sorceress, who specializes in love potions and charms. Her mystical abilities are not as developed as Amora’s, but she is still very strong. She is extremely good at getting men to do her bidding, and has teamed up with Loki in order to succeed where her sister has failed in ensnaring the God of Thunder. In both the comics and Agents of S.H.I.E.L.D., she has also appeared to antagonize the goddess Sif.

The Destroyer is a magical suit of metal armor, stronger than Uru or Adamantium, created as an enchanted guard to protect Asgard from dangerous threats. It is usually under the control of a king, but it does have some ability to act on its own. It fires powerful energy rays from its helmet piece and is nearly indestructible.

In the first Thor film, the Destroyer was first a sentinel for Asgard’s protection against invading Frost Giants before being used as a weapon by Loki, who was hoping to eliminate Thor and destroy Puente Antiguo in the process. In the most recent comics, Odin used the Destroyer in a similar manner, hoping to defeat Jane Foster as Mighty Thor and take Mjolnir from her. The Destroyer retreats just before it was going to mortally wound Freyja, the wife of Odin.

Also known as Carl “Crusher” Creel, Absorbing Man got his powers after drinking liquid that Loki had enchanted. He gained the ability to absorb the properties of whatever material or energy he touched, which would change his overall body structure and proportional strength.

He has taken on the properties of glass, bronze, helium, and even Uru, the mystical metal that Mjolnir is made of. His wife is Titania, a rival of She-Hulk and of Mighty Thor. After coming into contact with another mystical hammer in Asgard, Creel transformed into Greithoth, Breaker of Wills, and went on a destructive streak.

Mangog is a fearsome creature composed of the sum hatred of a billion billion beings, who feeds on their loathsome energy. He first appeared in Thor #154 after being freed from deep beneath Asgard, and he tried to bring about the end of the world by taking the Odinsword from its scabbard. Jane Foster also fought him in the alternate Marvel What If? universe where she found the hammer Mjolnir instead of Donald Blake.

He is extremely strong and supposedly immortal, since Mangog claims hatred will always exist in some form, and from that he gets his immense power. His sources of anger can be cut off and repressed, though, which does weaken him.

Of course, what would a list of Thor’s greatest villains be without the trickster god himself, Loki? What would Thor be without Loki? The two have famously been at odds since the beginning, with Loki wielding magic and tricks to combat Thor and his strength.

He is of Frost Giant heritage, descended from Laufey the Giant King. Loki has taken many forms over the years, including his infamous Lady Loki self, as well as a young child in the form of Kid Loki. On the screen, he is portrayed by Tom Hiddleston, and Loki was previously a constant foe of not only Thor but the Avengers as well. Though he swears now, in the comics and the MCU, that his days of trickery are behind him, given his past, is it any wonder Thor struggles to trust him? Would you trust the God of Lies? 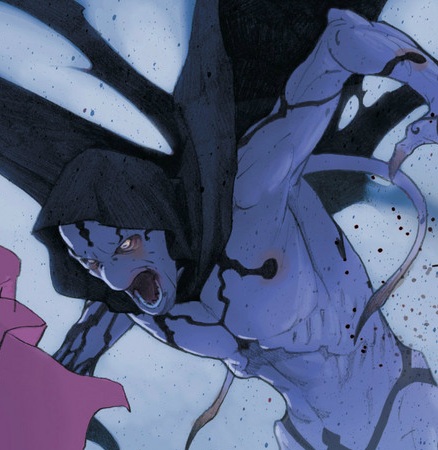 Sure, a villain’s ability to destroy is scary enough. And Gorr, after all, does wield All-Black the Necrosword, a formidable artifact from Knull himself (the creator of symbiotes). However, the true terror of Gorr the God Butcher is not in his potential for destruction. It’s the fact that he believes his cause for destruction to be righteous above all else — a villainous quality that always spells disaster.

Among Gorr’s specialties is torture — he has had thousands of years to perfect his craft. No deed is too horrific for Gorr to commit. He has murdered an infant, constructed a time-spanning bomb, and defied the universal laws of death over and over again. In short, Gorr will stop at nothing to bring every god to his justice.

Thor’s foes are varied in their abilities and the threats they pose. They challenge his wits and his strength, and ultimately prove his heroism. Not all enemies can be easily bested by a swing of Mjolnir, but one thing all these villains can agree on is that it is not fun to be on the receiving end of a hammer throw. So do your best to stay on Thor’s good side!

Do you have a favorite Thor villain? Are you excited for Thor: Love and Thunder? Keep the conversation going over at side.show/geekgroup, and don’t forget to Let Your Geek Sideshow!

Amy’s first trip to a comic book store was a complete accident — it turned out to be the happiest accident of her life! Since then, she has delighted in reading all sorts of stories by Marvel, DC, and Image publishers each week. She also works in her local comic store and collects action figures and posters to feed her habit of general nerdiness. Her favorite hero is Thor, followed closely by Squirrel Girl. Amy manages and edits general comic book content for The Geek Initiative news site.