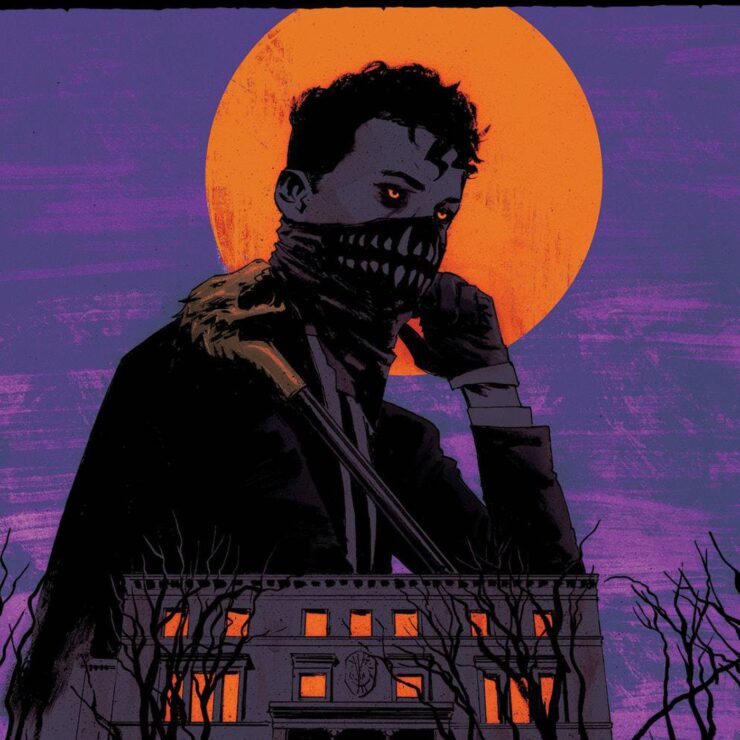 The runaway hit comic series Something is Killing the Children (SIKTC for short) introduced readers to the cutthroat House of Slaughter. An extension of the ancient Order of St. George, this secret society is dedicated to the systematic hunting and killing of vicious monsters — monsters that only typically children can see. The House of Slaughter also eventually became its own spinoff series, which broke records as one of Boom Studios’ most highly pre-ordered titles of all time.

Members of the House of Slaughter each have a role to play in keeping the world safe from supernatural threats. While there are other disciplines and sects of monster hunting, like those under the Maison du Boucher (or the House of Butcher, located in New Orleans), the House of Slaughter is divided into six different color-identified groups. These initiates undergo a ritual to ensure that they can see monsters into adulthood, and if they survive the House’s trials, they then take Slaughter for a surname and are granted their teeth.

These teeth give their bandana masks that signature, monstrous look — but what exactly do all their colors mean? Introduced in SIKTC #20, let’s explore the six different divisions of House of Slaughter and what specialization each mask signifies. 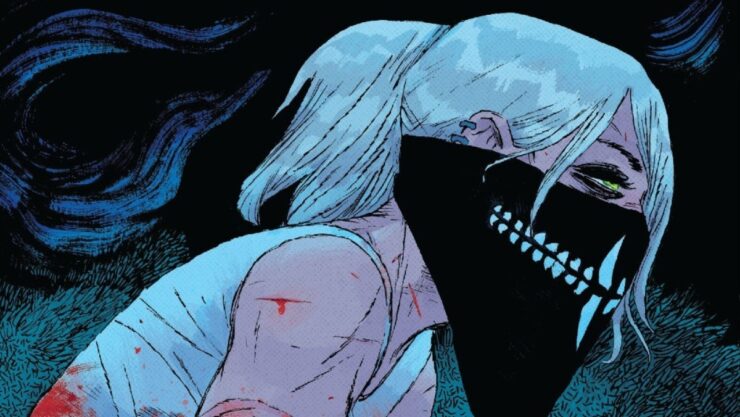 Protagonists Erica and Aaron Slaughter belong to the Black Mask designation, a lonely and low-staffed part of the House of Slaughter. By nature, Black Masks are solo monster hunters. However, the members we meet are fiercely loyal to one another and act like a family unit, guided by the protective and alcoholic Jessica Slaughter. They most often clash with the White Masks, who are their fundamental opposites.

Black Masks are often as ruthless as they are resourceful — they are capable of dispatching threats on their own, even at the cost of their own health and safety. Arguably some of the most powerful members of the House, they don’t need to rely on others to take down creatures like Duplicitypes and Oscuratypes. However, they also tend to have personalities that don’t get along well with others and their work is considered pretty thankless.

Still, the Black Masks have been many readers’ introductions to the brutal world of Something is Killing the Children, and fans love their relentless dedication to slaying all manner of monsters that go bump in the night. 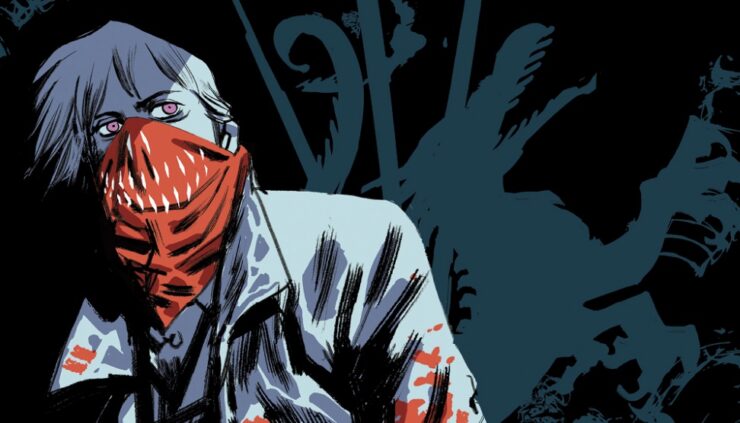 House of Slaughter‘s second arc introduced a new Scarlet Mask protagonist, Edwin Slaughter. Considered the “lifeblood” of the House, the Scarlet Masks aren’t actually monster hunters. While other members of the organization specialize in field work, these ruby-faced figures are the bookkeepers and administrative leaders of the operation. They are often mistaken for household servants, because they keep order and serve meals.

Primarily, Scarlet Masks are tasked with keeping track of the comings and goings of the other hunters while also facilitating their missions and making their lives easier. They tend to be less confrontational, more suited to roles as politicians, philosophers, and artists like Edwin. The Scarlet Masks also tend to know all the secrets of the House and use their cerebral specialties to their advantage. 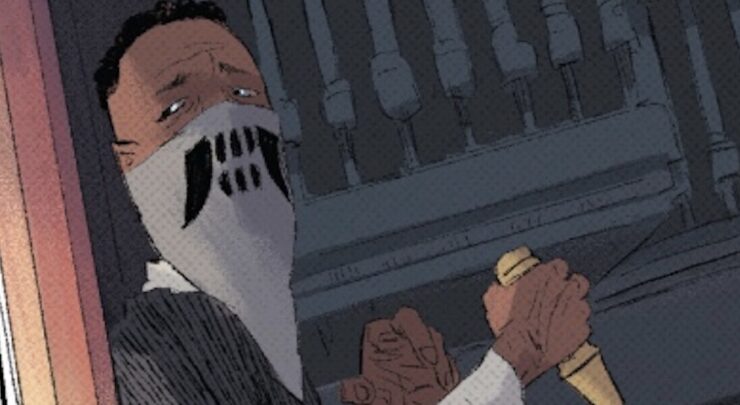 Only mentioned in passing, the Silver Masks are not nearly as plentiful as other mask colors within the House of Slaughter. Other branches of monster hunting organizations tend to have more Silver Masks, who are considered specialists trained to deal with monsters of myth and folklore. However, the Chicago division of the Order of St. George only has two of these hunters in its employ, given that modern America has far fewer mythological beasts embedded in its cultural history.

Silver Masks are hunters trained to deal with more traditional monsters like vampires and werewolves. They study the weaknesses and histories of these creatures, utilizing tools like wooden stakes, silver bullets, holy water, wolfsbane, and other weapons and resources. Basically, the Silver Masks are the Buffys of the House of Slaughter, though unlike the Chosen One, there can be as many as needed depending on the threats present. 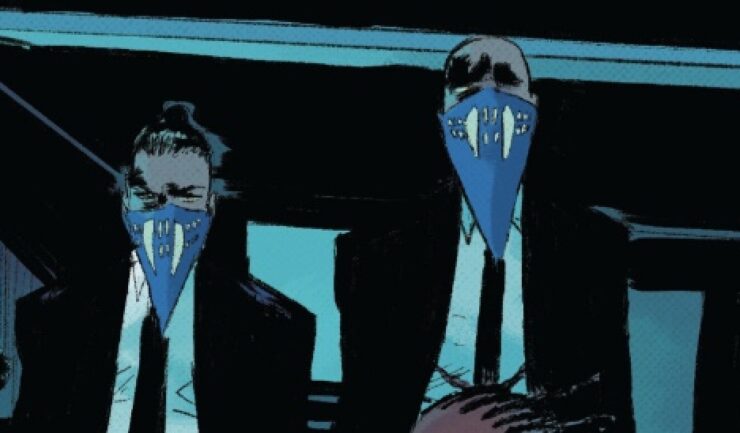 In ancient times, the Azure masks served as the Order’s blacksmiths, forging weaponry to fight monsters. This craftsmanship continued into the modern era, though it evolved with the introduction of digital technology. Currently, Azure Masks like Gary Slaughter not only maintain the weaponry for their fellow hunters, but they also lead the tests of skill that prove someone is worthy of joining the monster-slaying society.

Like Scarlet Masks, these members of the House are not active field agents. In fact, with their technical prowess additionally translating to computer smarts, they are extremely secretive and skilled in hacking. Azure Masks use their skills to help keep digital media under control for the House — making news stories disappear, helping hunters evade detection on security footage, and more. 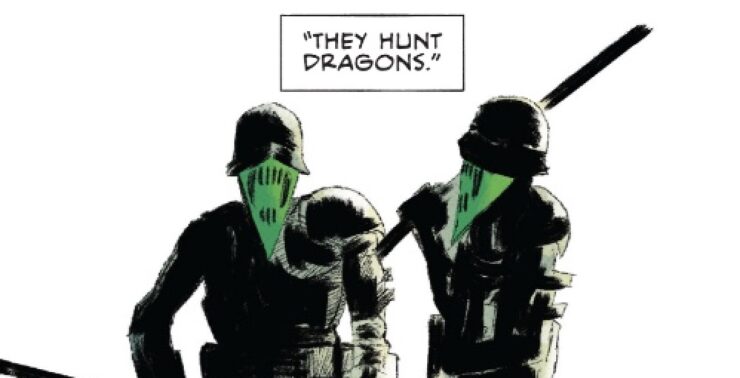 The House of Slaughter is one branch of the Order of St. George, so named after the myth of Saint George and the Dragon. This story involves the titular Christian knight slaying a mythic beast who was extorting villagers for tributes of treasure, livestock, and eventually human lives. Emerald Masks maintain that tradition as hunters specialized only in seeking and destroying dragons — they are considered the most lethal hunters of all the colors.

While the Order’s symbol is a dragon pierced with several lances, dragons aren’t the primary monsters in either Something is Killing the Children or House of Slaughter. Only in most recent issues did the Scarlet Mask Edwin Slaughter encounter what he claimed to be a dragon — though his superiors refused to believe him. What is known about dragons in this world is that they are primordial forces of malice, death, and destruction. Even the most skilled hunters will have trouble withstanding their strength without the expertise of an Emerald Mask. 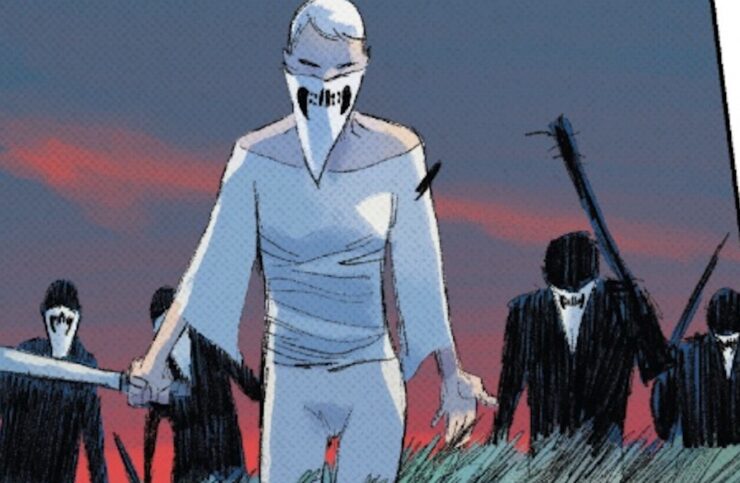 White Masks, though skilled and plentiful, have only been shown in the context of how they bully and antagonize other members of the Order — namely, the lone Black Masks. There’s strength in numbers, as White Masks are skilled in pack tactics and group efforts to defeat the biggest monsters. Many hands make light work, however it’s suspected that alone, White Masks cannot handle threats as well as other groups in the House.

The White Masks are currently led by the cold and calculating Cecilia Slaughter. She previously led her squad into battle when the children of Archer’s Peak were disappearing and Erica Slaughter had trouble containing the threat. Working together, they tend to form cliques and hunt for prey socially as well as in the field. Jace Boucher, Aaron Slaughter’s first romance, joined the White Masks when recruited from Maison du Boucher and initiated into the House of Slaughter.

The world of Something is Killing the Children and the history of the Order of St. George is only just beginning to unfurl on the comics page. Fans can hopefully look forward to plenty more monster-killing and intrigue as our brave heroes from the House of Slaughter navigate the dangerous world.

Which House of Slaughter mask color is your favorite? What type of hunter would you want to be? Keep the conversation going with other comic book fans at side.show/geekgroup, and don’t forget to Let Your Geek Sideshow!

POLL: Which Marvel Family Would You Join?