Functioning as both another entertaining entry in What If…?’s exploration of Marvel’s Multiverse as well as a touching tribute to the late Chadwick Boseman in his last performance as T’Challa, this week’s episode of Marvel’s What If…? took viewers on a galactic journey to many familiar places with well-known characters.

As the story begins on Morag, the Watcher poses a philosophical question to the audience: “But in a Multiverse of infinite possibility, is your destiny determined by your nature or by the nature of your world?” The episode, entitled “What If…T’Challa Became a Star-Lord?,” grants viewers a chance to consider this question by seeing what kind of outlaw T’Challa would have become had he been kidnapped as a child in Peter Quill’s place.

A Different Kind of Outlaw 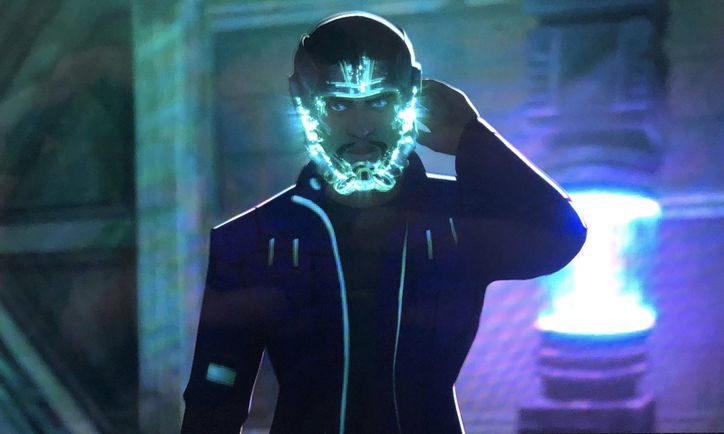 The episode introduces a masked Star-Lord to viewers as he makes his way to collect the orb containing the Power Stone. As in Guardians of the Galaxy, Star-Lord’s artifact extraction is interrupted by Korath and two Sakaaran soldiers, who are there for the orb at Ronan the Accuser’s behest. Things take a very different turn in What If…?, however, when Star-Lord reveals himself to be T’Challa. Instead of being met with confusion like Peter Quill was, Korath is almost star-struck upon recognizing T’Challa, explaining to the Sakaaran soldiers that Star-Lord “steals from the powerful and gives to the powerless.”

Both the immediate, respectful recognition and the explanation of how T’Challa operates as an outlaw make it abundantly clear within the first few minutes of the episode that T’Challa’s Star-Lord is starkly different from Peter Quill’s. Where Peter was roguish and ultimately self-serving at this point, T’Challa uses his skillset to aid others in need. These admirable, selfless qualities that T’Challa was already known for in the Marvel Cinematic Universe are clearly intrinsic, incontrovertible qualities that remain whether he is the King of Wakanda or a galactic explorer and outlaw.

His differences are further highlighted when he faces down a large group of Sakaaran soldiers. Instead of being confronted by Yondu for attempting to double-cross him, Yondu comes to his aid. It is revealed that the reason they decided to acquire the orb was not for power or wealth, but to provide power to a dying star and save a solar system from destruction. As Yondu wistfully considers a time when they would have sold the orb, T’Challa sums up what makes him one of the most noble men in the entire MCU when he says, “No treasure is worth as much as the good that can be done with it.” 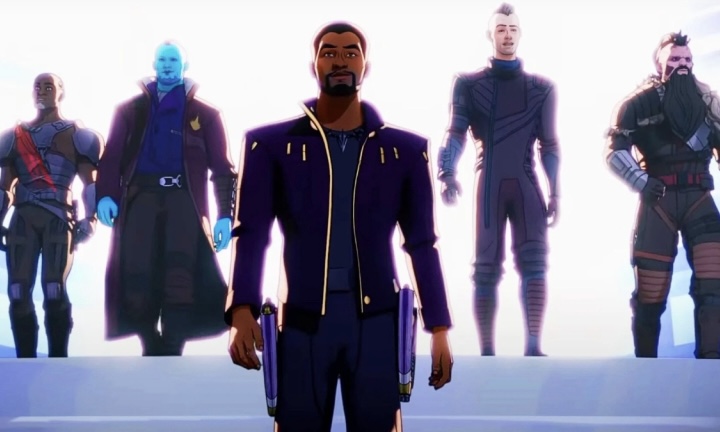 As it would turn out, Kraglin and Taserface’s mistake in picking up the young Prince of Wakanda instead of Peter Quill would ultimately have a positive ripple effect on the lives of many. T’Challa and the other Ravagers celebrate their success over drinks, and several familiar faces make an appearance.

It is revealed that Drax is a bartender with a still-living wife and daughter thanks to direct involvement from T’Challa. Nebula is now more flesh and blood than cybernetics and is an ally of T’Challa’s, affectionately calling him “Cha Cha.” And perhaps most remarkably, Thanos is not a radical, all-powerful being bent on wiping out half of the universe; he explains that by talking with T’Challa, he was able to see that there was a better way to address the concern regarding limited resources for exponentially growing populations than snapping away half of the universe.

Simply by being his kind, genuine, giving, and honorable self, T’Challa has effectively steered the Ravagers onto a Robin Hood inspired path, swayed Thanos away from erasing half of the universe, and in doing so, had a hand in preventing Nebula and Drax from facing heartbreaking fates. Based on what viewers see in this episode, it appears that every life T’Challa touches is improved and even healed, leading to entire worlds being bettered and saved as a result. 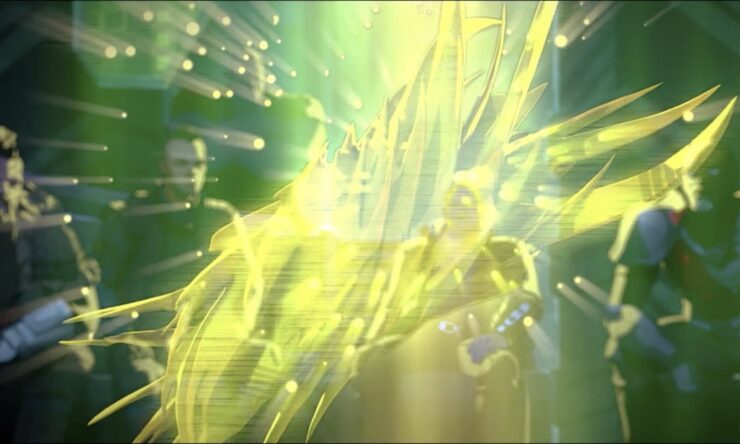 Similar to Guardians of the Galaxy, What If…? finds this band of unlikely allies making their way to the giant, floating Celestial skull to meet with the Collector, Taneleer Tivan. Whereas in Guardians of the Galaxy he was an eccentric and morally corrupt connoisseur of oddities and artifacts from all over the galaxy, viewers learn that the Collector has essentially filled the power vacuum that was left when Thanos turned away from his path as the Mad Titan. In spite of T’Challa’s success in redirecting Thanos onto a righteous path, it seems that the galaxy was destined to have a formidable overlord to contend with.

T’Challa, the Ravagers, Nebula, and Thanos find themselves directly challenging his power with a well-planned heist to obtain the Embers of Genesis, which, according to Nebula, have amazing healing properties that could bring planets back to life and address hunger across the galaxy. 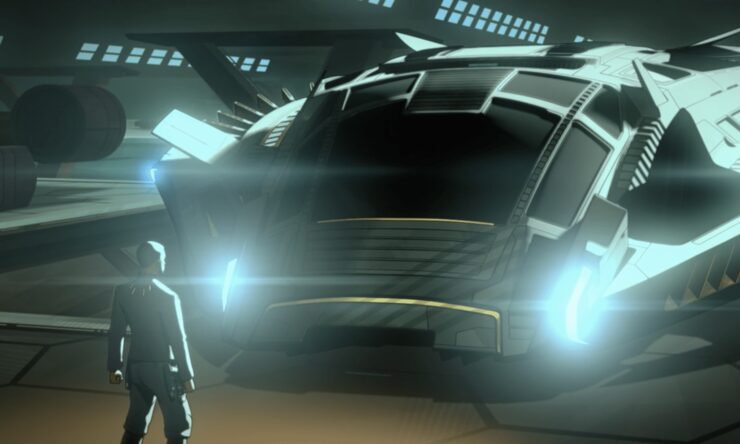 As T’Challa searches the Collector’s museum during their heist, his Vibranium necklace glows and a Wakandan spacecraft lights up in response. When he boards the ship, he finds out that it contains a homing beacon bearing a recording of his father. In spite of his wandering spirit, reconciling his noble nature with his choice to never return home is challenging. As he watches the message play, T’Challa learns that Yondu had lied about the fate of Wakanda and T’Challa’s family, and that the Wakandan people had never stopped searching even the deepest reaches of space for their lost prince. 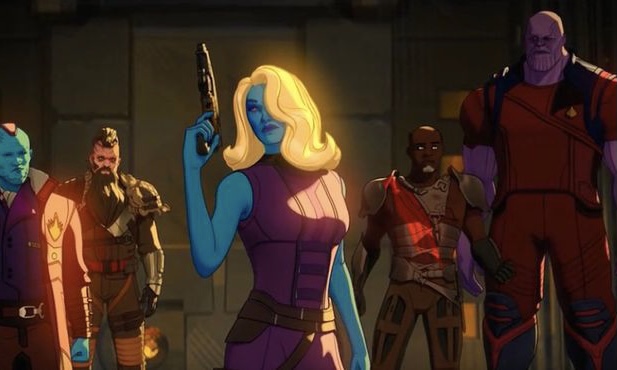 All seems to be going according to plan until Nebula appears to double-cross her allies, landing them behind bars. With the entire group of Ravagers and would-be thieves captured, it looks like any hope of obtaining the Embers is lost. Nebula, ever full of surprises, then rescues everyone but the separately imprisoned T’Challa in what turns out to be a triple-cross.

As it turns out, she and T’Challa had planned all along for things to transpire exactly as they did. As she and the others make their way to the ship, T’Challa escapes his entrapment and is aided by Yondu in his fight against the Collector, who turns out to have an impressive arsenal including Captain America’s shield, Mjölnir, and Hela’s helm, among other things. T’Challa’s positive influence even inspires Carina, the Collector’s slave, to take a pivotal stand against Ebony Maw and Taneleer. By working as a team and through their loyalty to one another, the Ravagers obtain the Embers, the Collector’s prisoners are freed, and every member of the motley crew escapes with their life. 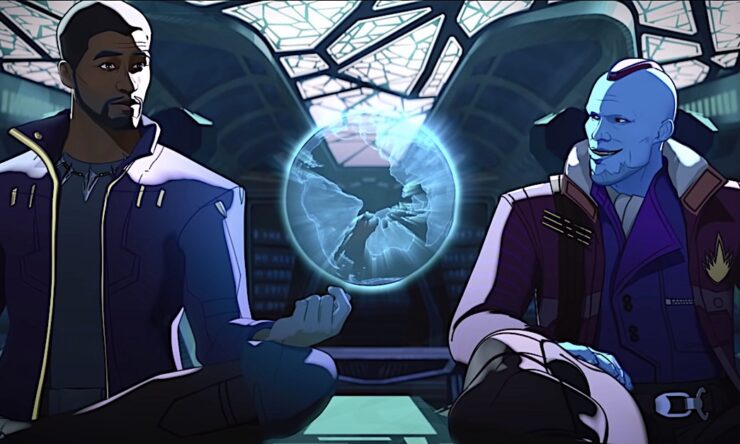 Following a tense moment when imprisoned together, T’Challa and Yondu are able to reconcile following the revelation that Yondu had lied about Wakanda’s fate. Ever the empathetic and forgiving soul, T’Challa is able to see that in taking T’Challa under his wing when he was young, all Yondu did was grant him his ultimate wish to explore as much as he could. As in the Guardians of the Galaxy movies, Yondu has a genuine, fatherly love for his now-grown ward, and with a ward like T’Challa, the very best of Yondu ended up being brought forth.

As T’Challa ponders what his next move should be and where he should end up, Yondu tells his surrogate son that “on any planet, among any people, there ain’t no place in the galaxy where you don’t belong.” Together the Ravagers arrive in Wakanda, and multiple families are able to come together in peace. It appears that after years of encouragement from T’Challa and having saved one another on Knowhere, Thanos and Nebula are at least attempting to heal their rift. With his diplomacy, empathy, and love of both of his families, T’Challa is able to bring his birth and Ravager family together, seeing that both have given him so much.

While the episode has an overall uplifting and healing tone, one family reunion does not bode as well for the future. After many years, Ego is eventually able to find his half-celestial son Peter Quill listening to “Space Age Love Song” by A Flock of Seagulls as he mops the floors of a Dairy Queen. The Watcher forebodingly warns that “this might spell the end of the world.”

“What If…T’Challa Became a Star-Lord?” is a remarkably strong entry in the What If…? series, granting Marvel fans a chance to witness facets of characters that remained unexplored previously due to the different variables, losses, and traumas that arose in each of their lives.

It also serves as both a poignant farewell to Chadwick Boseman’s T’Challa and an emotional study in what made T’Challa such a noble character with qualities everyone can aspire to embody. The lives that both the superhero and the man behind him touched are lovingly reflected in the entire episode and in the final frame that reads, “Dedicated to our friend, our inspiration, and our hero Chadwick Boseman.”