What is Doomsday, and Where Did He Come From?

Every legendary hero has a nemesis that serves as their perfect opposite, though equal.  For Batman, it’s The Joker.  For Superman, it’s Doomsday.  This monster is everything that Superman is not- reckless, beastly, relentlessly hate-driven.  His only imperative?  Survive, overcome, and evolve.

Made famous as the villain responsible for the death of Superman, Doomsday is a destructive force to be reckoned with.  From his first appearance in the comics, to starring in the Death of Superman animated feature, he has been repeatedly killed and cloned, creating one of the biggest threats known to man (or Superman).  Get to know more about this monster of madness, and find out just how he was able to bring down the Last Son of Krypton himself! 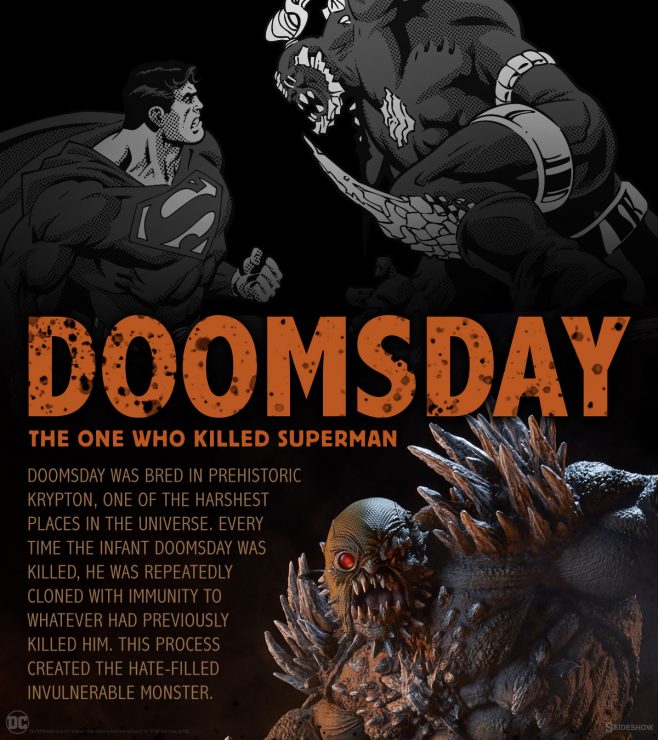 Doomsday, originally known as “The Ultimate,” was genetically engineered and bred to survive in the harsh, brutal wastes of prehistoric Krypton, where only the strongest and most ruthless could survive.  His creator imbued him with hate and destruction in an experiment to create the perfect being, where the infant Doomsday was abandoned to the wilderness and swiftly killed.  He was then cloned from his remains, emerging stronger and more immune to the things that killed him.  This process was repeated over decades, until the Ultimate emerged as the creature we recognize now as Doomsday.

In his time on Krypton, Doomsday evolved to withstand the extreme temperatures and inhospitable atmosphere of the prehistoric planet.  He then grew stronger, adapting to survive off of solar energy without need for food or water.  He became ruthless, hunting the very predators of Krypton that once slew him.  Then, he killed his creator Bertron, escaped the planet, and went on a planet-hopping killing spree.  He was eventually captured and contained in a green burial suit with red-lensed eyes, seen in the Exclusive Edition of Sideshow’s Doomsday Maquette.

The Kryptonian-killer made his first full appearance in Superman: The Man of Steel #18, when the creature escaped his containment buried deep within a vault in the earth.  Freeing one arm from his restraint suit, Doomsday escaped and began a rampage, quickly attracting the attention of the Justice League. 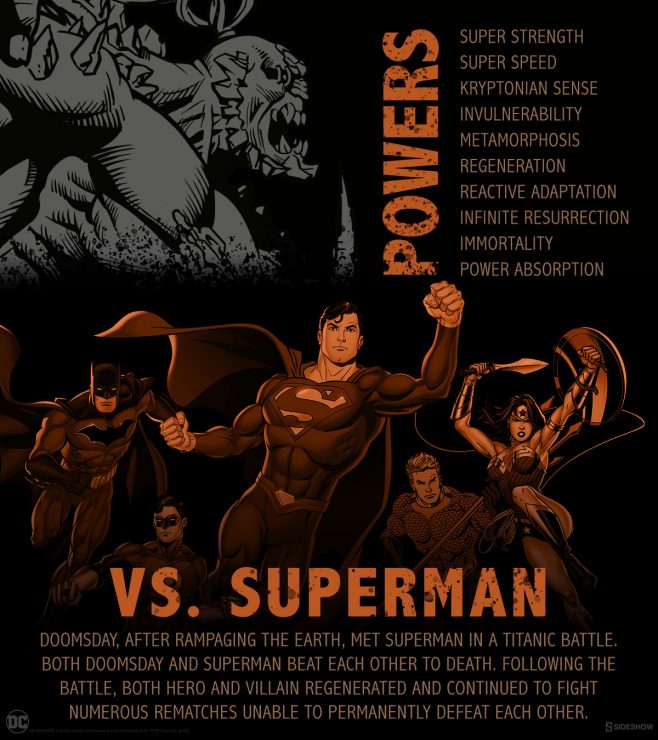 In his first epic fight against the members of the Justice League, the monster defeated them all with one hand tied behind his back- literally!  His ancient burial cables had restrained him, but even still the heroes were no match for him.  When League member Booster Gold said that the creature’s rampage reminded him of “the arrival of Doomsday,” the creature gained its iconic namesake.

Doomsday developed a strong desire to murder Superman, who realized that the creature was growing stronger and would attack relentlessly without compassion.  In the Death of Superman storyline, these two foes had an evenly-matched struggle for survival that resulted in both Superman and Doomsday fighting to the death in front of the Daily Planet building.  After Superman’s death, four other “Supermen” arrived, claiming to be the true hero.  Doomsday’s body was chained to an asteroid and sent into space, but ominously, he came back to life and awoke with laughter.

Doomsday has continued to be a powerful and evil presence in the DC Universe, squaring off against Superman and the Justice League many more times in his ultimate fight to evolve and overcome all life in his quest for destruction. 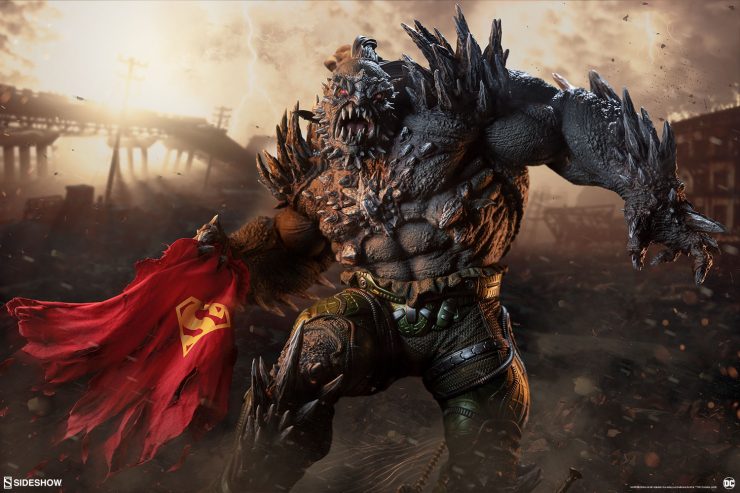 If you’re looking to bring certain doom to your lineup of DC collectibles, be sure to check out Sideshow’s Doomsday Maquette, available for pre-order now.

Measuring a monstrous 26.5″ tall, Doomsday puts up a ferocious fight against heroes in your collection like Batman collectibles, Wonder Woman collectibles, and Superman collectibles as remnants and trophies from the Justice League create an epic scene at the base of this incredible DC statue.