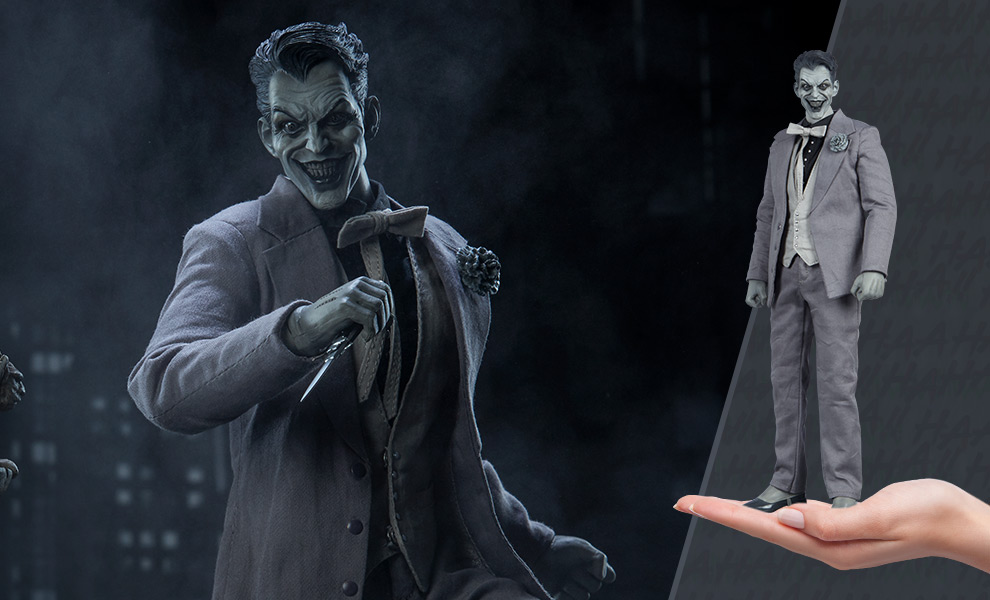 “I don’t hate you because I’m crazy… I’m crazy because I hate you!”

The Joker Sixth (Noir Version) Scale Figure features an intricately tailored costume in dapper black, white, and grey tones, giving the Clown Prince of Crime a uniquely vintage appearance. His costume consists of a fabric suit jacket and pants, a vest, a dress shirt, and a bow tie. He also has a sculpted lapel flower, shoes with sculpted spats, and ten different gloved hands; a pair of grip hands, a pair of fists, a pair of card-holding hands, and additional hands for pointing, holding his cane and gun, and a hand with a gag buzzer.

The Joker (Noir Version) Sixth Scale Figure has an articulated body, perfect for crafting any number of clownish or cruel poses in your collection. His monochromatic portrait is inspired by his DC Comics appearance, complete with his signature makeup, coiffed hair, and a sinister smile. The figure comes with a number of detailed accessories for executing The Joker’s most devious schemes, including The Joker card, a cane, a crowbar, and a knife.

Terrorize the town and get the best of Batman when you add The Joker (Noir Version) Sixth Scale Figure to your DC collection today!

Stunning model for my first piece and to begin my collection with, got this and the Batman Noir to go with it. Really really happy.

Awesome joker collectible really love it. Also own the Batman Noir as well both are really cool and go good together. Only downside wish it had of come with a certificate to show what number it is out of the 500 made.

This classic noir black and white Joker is a throw back to the silver age of comics. To a time when the Joker was so uncomfortable and scary. This is the type of Joker that would kill Robin, in fact he comes with a crowbar! Also a switchblade, his cane and even a hand buzzer that is actually a sharp weapon strapped to his hand. His face sculpt is downright spooky and evil. He is nightmarish to look at. Great articulation and accessories. I won the Batman noir in the Sideshow Con, loved it so much, I had to buy the Joker! So glad I did, the spot is amazing and hypnotically crazy. A true throw back to the silver age when the Joker was known for being extra sadistic. Highly recommend the pair.