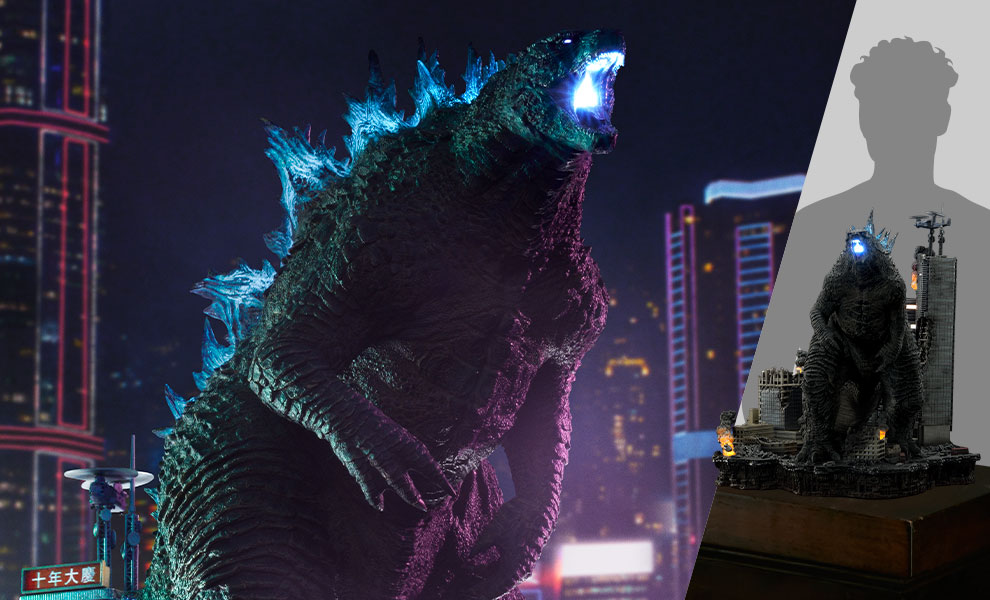 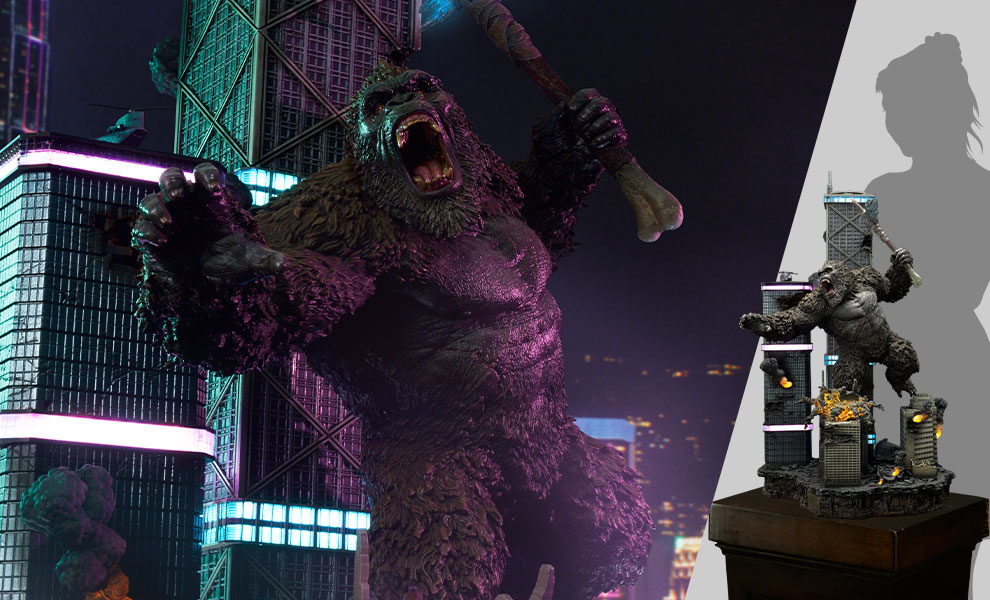 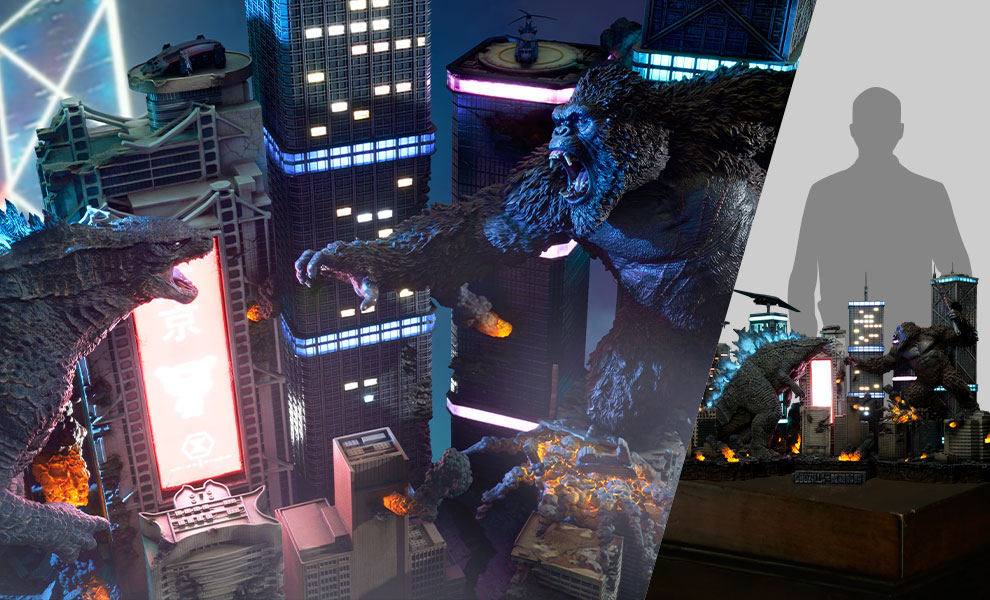 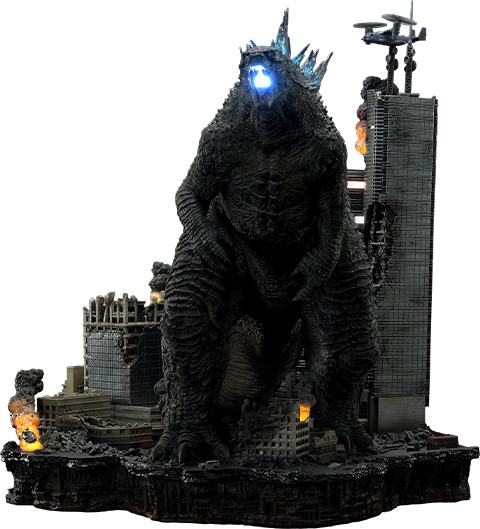 “Godzilla has never attacked us unprovoked before. These are dangerous times...”

Prime 1 Studio is unbelievably proud to finally reveal the first part of this earth-shaking piece in the Ultimate Diorama Masterline Series: the non-scale GODZILLA FINAL BATTLE from Godzilla vs. Kong!

Godzilla, King of the Monsters, has finally made his way to Hong Kong to destroy what has been provoking him from the shadows. Surrounding him, the death and destruction he leaves in his wake! At 24 inches tall and almost three feet wide, this ultimate Godzilla diorama makes The God of Destruction look like he just walked off a film set!

Titanus Gojira has been deftly sculpted by our skillful artisans; they’ve included each and every wrinkle, fin, body plate and texture of his scaly carapace. We’ve paid particular attention to his face and expression, to portray Godzilla at his angriest and most indignant! We have illuminated his eyes and mouth to show him at the critical moment, right before he unleashes his Atomic Breath! And perhaps most impressively, our engineering wizards have worked out Godzilla’s dorsal fin power up sequence. Once you turn on the diorama’s lighting, Godzilla’s dorsal fins slowly light up from the end of the tail, all the way up his back and to his head in an impressive power up sequence...signifying once again, that whatever Godzilla has pointed his Atomic Breath at, will most certainly be obliterated!

To ensconce Godzilla in realism, we have crafted an unbelievable miniature Hong Kong nightscape, reeling from Godzilla’s attack! LED-Illuminated buildings have been cratered and damaged, LED-Illuminated fires are raging everywhere, helicopters are swarming helplessly at the chaos, and best of all...for only the most passionate Prime 1 Studio fans, we have included the ultimate Easter Egg into the base. What could it be? 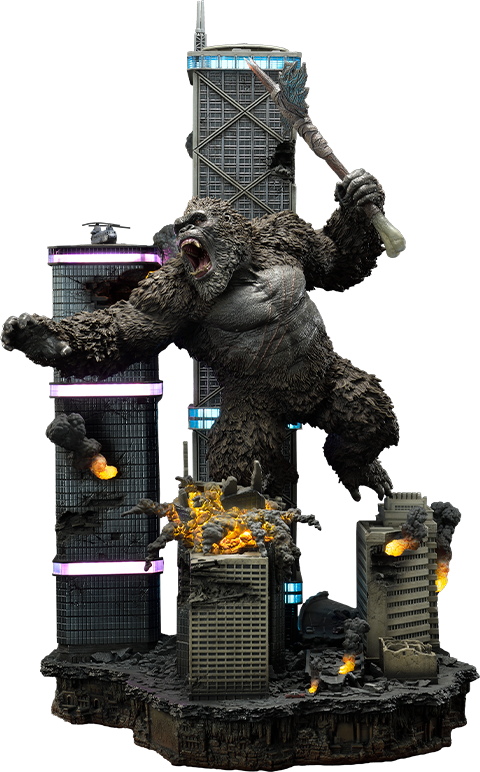 “We’ve got to stop Godzilla. It’s our only chance. We have to take it!”

Prime 1 Studio is unbelievably proud to finally reveal the next part in this earth-shaking piece in the Ultimate Diorama Masterline Series: the non-scale KONG FINAL BATTLE from Godzilla vs. Kong!

Kong bows to no one! And when his rival Alpha Titan, Godzilla, comes a-calling; Kong answers in spades! The King of Skull Island has climbed his way out of his Hollow Earth Kingdom to answer Godzilla’s challenge in a nightmare vision of Hong Kong! This massive Kong diorama stands at a towering 31.5 inches tall!

Kong uses the environment to his advantage in this ultimate diorama of Hong Kong cloaked in darkness and fire. The Eighth Wonder of the World launches off an obliterated building to hurl himself at the King of Monsters! Our sculptors have captured the abject rage in Kong’s face and the determination in his posture. Kong takes aim at Godzilla with his right hand and readies his game-changing Battle Axe in his left. We’ve taken great care to render Kong’s simian fur, battle-scarred chest, and gigantic proportions true to his film version.

Rounding out this dynamic diorama is a city in ruins! We’ve lit building windows with LED Illumination, while other structures feature blazing fire and smoke. Highways have collapsed and damaged vehicles are strewn about as high atop one building, a helicopter waits for rescue passengers that are not coming.

This Ultimate Kong diorama is breathtaking in and of itself, but what if there was a way to have Godzilla and Kong fight head-to-head? However, if you’re a focused Kong fan, you owe it to yourself to get this Ultimate Kong Diorama today! 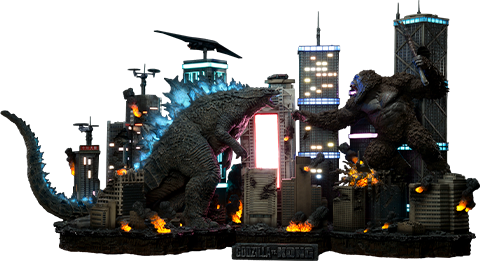 “So if they meet again...Who bows to who?” – Admiral Wilcox

Prime 1 Studio is unbelievably proud to finally reveal the most earth-shaking piece in the Ultimate Diorama Masterline Series: the non-scale GODZILLA VS KONG FINAL BATTLE from Godzilla vs. Kong!

Calling all Prime 1 Studio fans! Team Godzilla and Team Kong folks will have to set aside their differences and agree...this is the ULTIMATE Godzilla vs Kong diorama! Stare in awe and wonderment, as Prime 1 Studio has created the most amazing battle diorama ever created! Godzilla, King of the Monsters goes head-to-head against Kong, King of Skull Island in this lavish Hong Kong nightscape for the ages!

This magnificent diorama’s amazing dimensions tally up at over 31.5 inches tall, 56 inches wide and 26 inches deep. Godzilla’s side features the God of Destruction, situated in destruction of his own making. We’ve illuminated Hong Kong in various points with LED lighting. Godzilla himself, stands magnificent, accentuated by his Atomic Breath posture, magnified by the intricate lighting sequence we have worked up for his dorsal fin power up feature. Turn on the lights for Godzilla’s diorama and his dorsal fins light up from the end of his tail to the top of his head...signifying that he is ready to rock and roll Kong’s world with his Atomic Breath!

Surrounding Titanus Gojira are LED-Illuminated buildings, cratered and damaged, LED-Illuminated fires raging everywhere, helicopters are swarming helplessly at the chaos, and best of all...for only the most passionate Prime 1 Studio fans, the ultimate Easter Egg has been included in his base. What could it be?

Meanwhile, on Kong’s side, The King of the Jungle is on the attack, as he launches himself from an obliterated building, lit by LED-Illuminated fire and smoke! He’s working through his environment of destroyed buildings with LED-Illuminated windows and explosions. Kong definitely means business because we have equipped him with three different swappable heads to portray the range of emotions that only Kong can possess. His looks range from “fierce determination” to “righteous anger”, and all the way to “outright rage”! Not only that, but the Eighth Wonder of the World is also capable of swapping between an earth-shattering closed-fist punch, to wielding his secret weapon, the ancient Hollow Earth Battle Axe forged from an ancient Godzilla’s dorsal fin!

To complete this titanic environment, this diorama set comes with a “bridging cityscape” piece which consists of a high tower, a central tower, and a title plaque! The bridging cityscape’s high, left tower can be fitted with a giant flying aircraft carrier, the USS Argo. While the central tower features one of Walter Simmons’ extremely expensive and powerful H.E.A.V.s (Hollow Earth Aerial Vehicle) which could later feature prominently in reviving a downed giant! The bridging cityscape can be sandwiched between both the Godzilla diorama and the Kong diorama and features its own LED-Illuminated buildings and fire and smoke effects. And finally, to finish of this lavish display, place the Godzilla vs Kong title plaque prominently in the center and marvel at the magnificence that is this diorama!

Godzilla vs Kong fans, get your diorama while you still can! 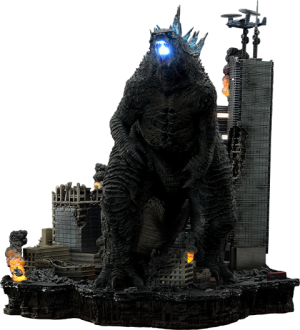 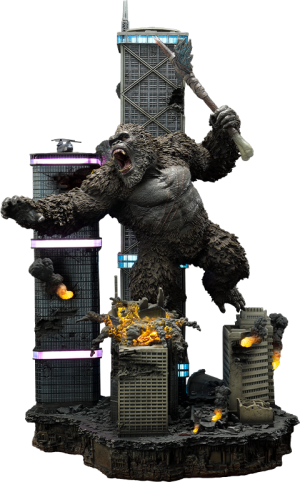 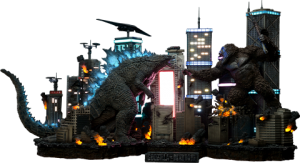