Skip to main content
Another batch of deals are live! Save up to 50% 🤩
https://www.sideshow.com/collectibles/16149

A former bounty hunter seeking to reclaim his ancestral armor, Boba Fett showed his battle prowess against advancing troopers during a confrontation with the Mandalorian™ and Grogu™ in “Chapter 14: The Tragedy.” The Boba Fett Premium Format Figure measures 22.38” tall and 15” wide, standing on a rocky Tython™ base, the site of the battle against Moff Gideon’s™ Imperial forces. With his armor donned and weapons in hand, Boba Fett fights with honor and intensity to uphold his end of the deal with Din Djarin™.

The Boba Fett Premium Format Figure is fully sculpted and features detailed paint application to recreate the weathered state of his salvaged armor. This polystone Star Wars statue includes both an unhelmeted and helmeted portrait, allowing you to unmask the infamous mercenary or complete his iconic look. Boba comes fully equipped for battle with his jetpack, a gaffi stick™, and a blaster pistol. Finally, with intricate cloth-like textures and dynamic motion designed into the pants and sash of his costume, Boba Fett is ready to join the fight in your collection.

Pair Boba Fett with other Premium Format Figures in Sideshow’s The Mandalorian series, including the Mandalorian and Grogu, Moff Gideon, and Cara Dune™ for a comprehensive collection of galactic heroes and villains from the hit show.

Take back what belongs to you and bring home the Boba Fett Premium Format Figure today! 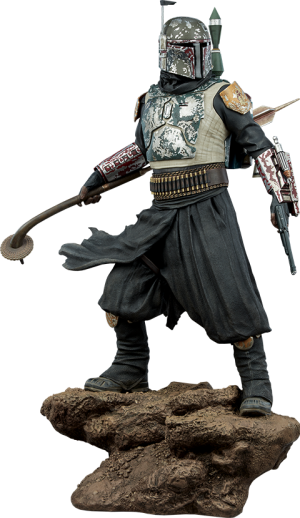