They say that a picture speaks a thousand words and that is certainly the case when it comes to movie posters. From eye-catching designs that jump out of their frame to iconographic prints that are left open to interpretation, there is an art to making every type of movie poster.

Over the years, countless posters have earned a spot on our unsuspecting walls but none have been more deserving than those from the horror genre. Whether they’re highly stylized or evocatively minimalist, a great horror movie poster will never fail to give us the heebie-jeebies.  Featuring all kinds of fear-inducing imagery, from flesh-eating zombies and ravenous demons to all-out blood and guts, these posters have the task of presenting the scary, often unsettling, themes of the movie while simultaneously enticing ticket holders.

Celebrating the twisted and the terrifying, this category of art delivers big on the tricks and the treats; so turn on a torch, grab a cushion, and check out our list of spooktacular one-sheets guaranteed to send a shiver down your spine. 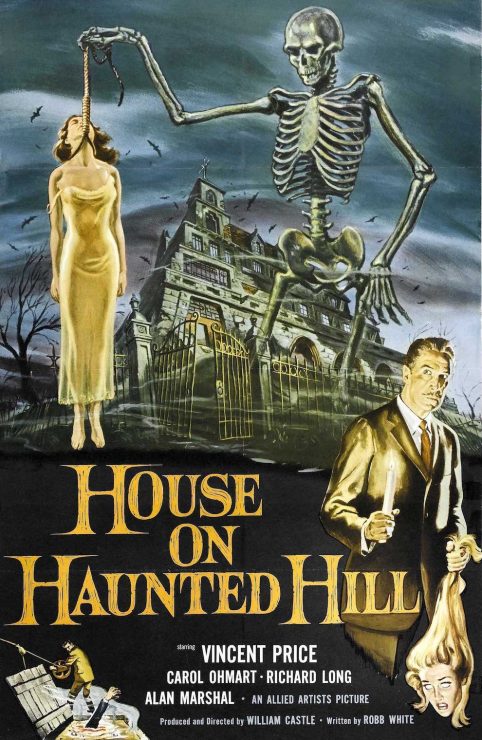 Artist Reynold Brown created a masterpiece when he designed the poster for House On Haunted Hill, emphasizing all of the grimly gothic elements of the classic B-movie directed by horror maestro William Castle.

The monsters and the macabre were always larger than the afterlife in Brown’s poster designs, oftentimes presenting traditional horror motifs in a funhouse-style manner. Following suit in this poster, a giant malevolent skeleton stands front and center of the image with a negligee-wearing corpse of a woman in his bony clutches. She dangles above another presumed victim, who is featured in the lower left-hand corner of the frame, reaching out from a suffocating trapdoor.

Directly opposite, a spot-on rendering of the sinister Vincent Price carries a single candlestick in one hand and the tresses of a severed head in the other while the haunted house, surrounded by bats and a rusty iron fence, eerily looms in the background of its sordid surroundings. 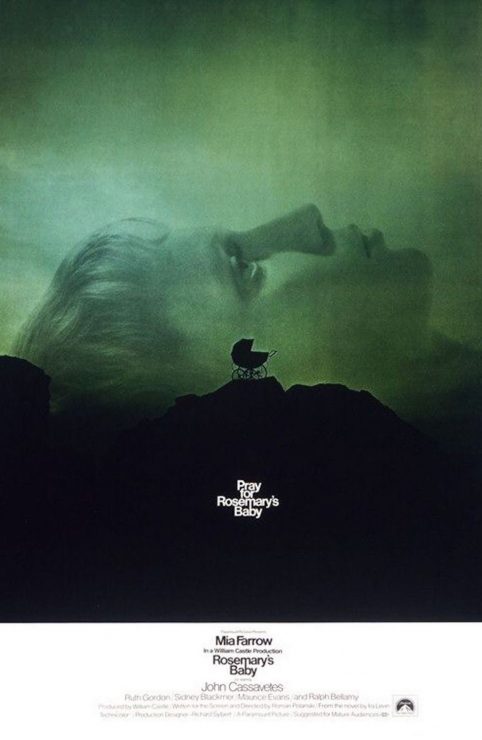 The poster for Roman Polanski’s psychological horror Rosemary’s Baby imparts a sense of dread through its brilliantly simplistic design by artist Stephen Frankfurt, who managed to develop an image that is almost as unnerving as the movie itself.

Mia Farrow’s face dominates this serene and sombre poster, with the actress appearing in a tranquil state from her side profile, disguising the darkness within. The discomforting symbol of a baby carriage is ominously silhouetted in the foreground of the disturbingly minimalist image, which is mysteriously swamped in a hazy green hue together with the shudder-provoking tagline: “Pray for Rosemary’s Baby.” 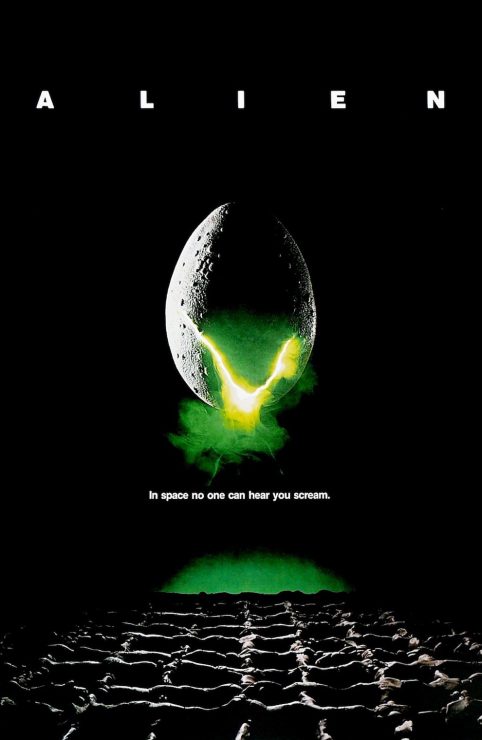 The poster for Ridley Scott’s chilling science-fiction horror proves that even the simplest of visuals can evoke the greatest of fears.

Steve Frankfurt and Philip Gips, graphic designers from Frankfurt Gips Balkind, were responsible for the beautiful and foreboding artwork that has become synonymous with Alien. The poster depicts a large cracked egg with an internal ominous green glow spilling out from its V-shaped crevice, which adds to the otherworldly feel of the picture despite the symbol being quite dissimilar to the Xenomorph eggs that appear in the movie.

The title text is announced in stark white, ultra-kerned and futuristic typography, giving an unsettling vibe alongside the terrifying tagline: “In space no one can hear you scream.” 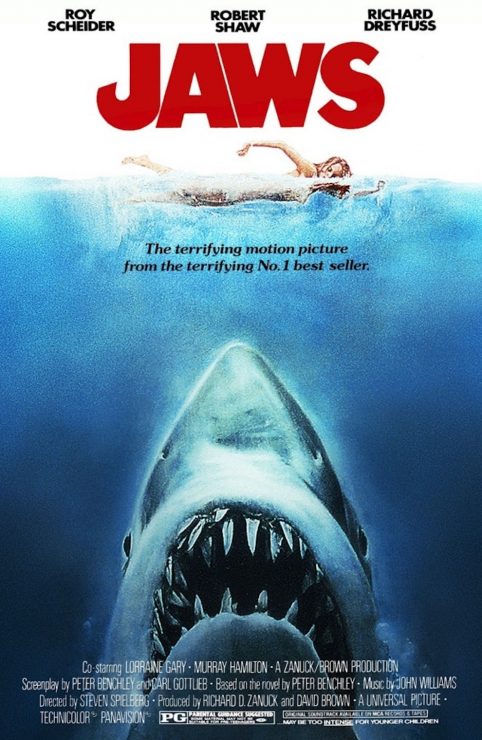 If there were ever a single image that had the power to instantly instill a sense of dread in all of us, it would surely be the iconic Jaws poster, originally created by award-winning artist Roger Kastel who became famous for his movie posters throughout the 1970s.

Feeding on our fears, the aptly primal image presents a nightmarish scenario that serves as the perfect bait to attract moviegoers to watch Steven Spielberg’s summer blockbuster time and time again. The poster creates tension by camouflaging an enormous shark in the murky depths of the ocean. Waiting and watching for its next victim, the great white looks up towards the surface with its bone-crushing jaws and jagged teeth ready to attack.

Directly above, a lone woman is depicted swimming atop the waves, oblivious to the terror that lies beneath. In the small band of sky at the top of the poster, the movie’s title appears in bold font with its letters printed in blood red, a color universally associated with danger. 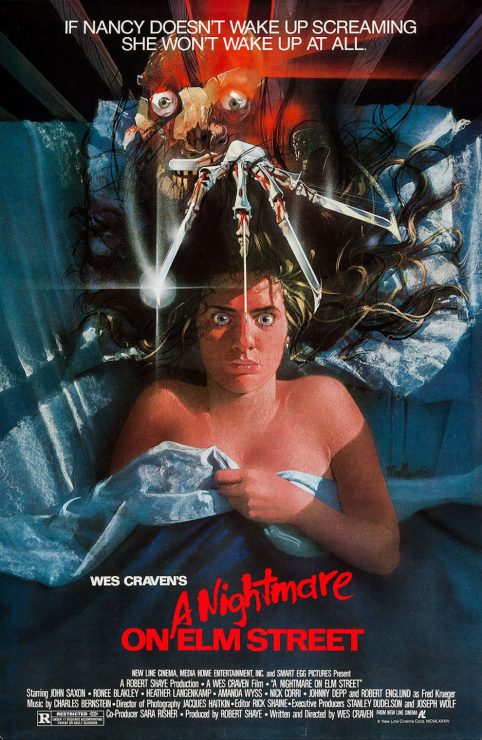 The poster for Wes Craven’s classic slasher A Nightmare On Elm Street is enough to haunt our nightmares for all eternity.

Matthew Peak was fresh out of art school when he was commissioned to design the iconic poster for New Line Cinema, and subsequently stayed on board to create the artwork for the first four sequels. His hand-painted print played a major part in popularizing the franchise, especially after the distribution of his original one-sheet.

In this finely crafted illustration, he utilizes a rich color spectrum to cut through the darkness almost as piercingly as Freddy Krueger’s sharp-bladed fingers, which hover above Nancy who is wide-awake in bed with his blade-fixed claws menacingly splayed out above her. 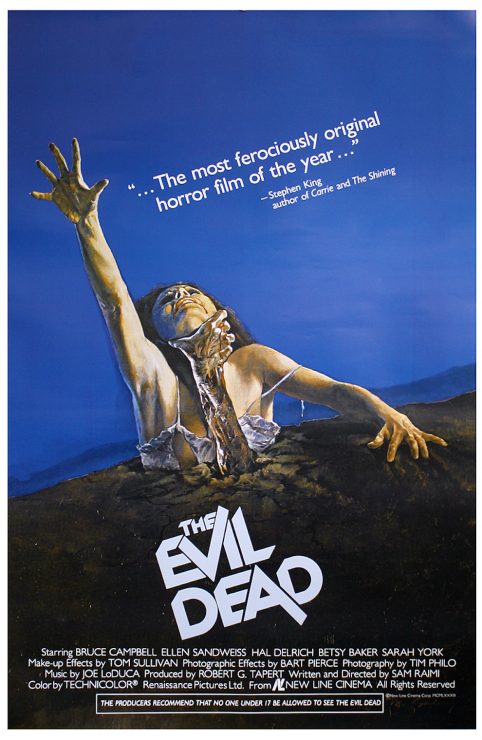 As one of the most famous movies and posters ever, this striking image for The Evil Dead earns a place in the horror history books.

The attention-grabbing artwork for Sam Raimi’s low-budget shocker is largely assembled around perspectives and angles, creating a skewed look at the world, whether you are above or below the ground. At the center of the image a young woman is positioned with her arm outstretched in a desperate attempt to stay alive, as a menacing hand forcibly tries to pull her down into the earth.

The title text uses angles and edges to mirror the struggle between victim and villain, with the letters ‘V’ and ‘A’ reaching out further than any of the others, trying to escape the confines of the borders. 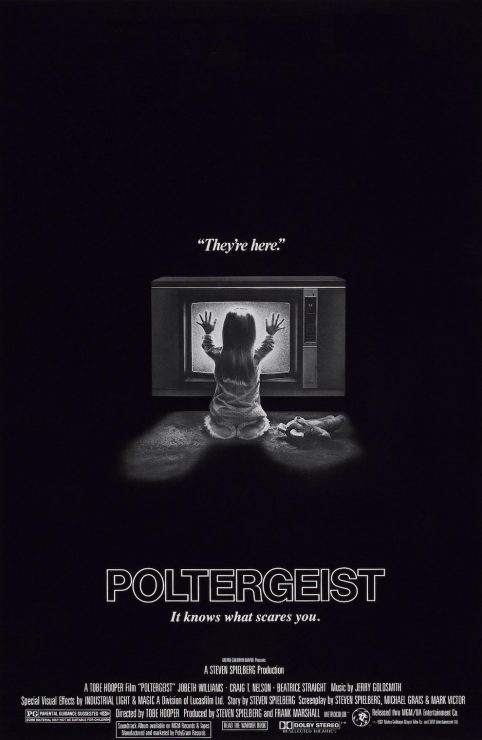 The tagline of the 1980s supernatural horror Poltergeist, directed by Tobe Hooper and co-written and produced by Steven Spielberg, boasts, “it knows what scares you” and this poster proves it.

Minimal in design, this image recreates one of the movie’s most memorable scenes in which Carol Ann Freeling, the youngest daughter of the suburban family, approaches a static television and eerily whispers the famous line, “They’re here,” which is also featured on the poster, set against the black background.

The poster outlines the silhouette of the little girl, who is surrounded by the ominous glow projecting out of the static screen in one of the greatest modern horror movie moments. 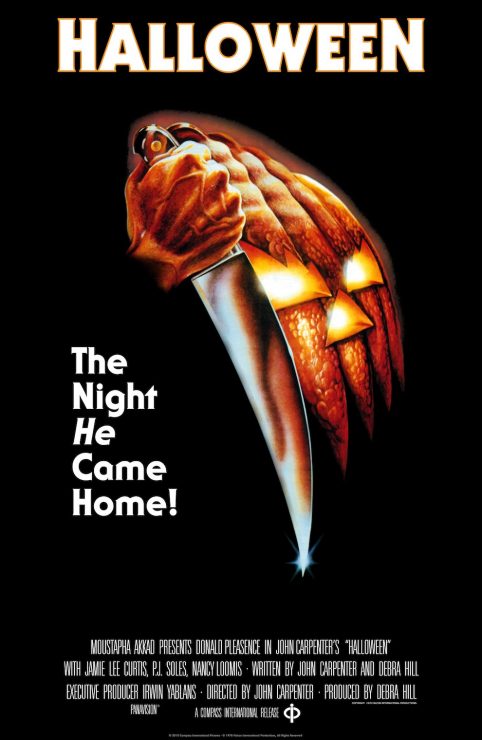 Nothing says Halloween like a nightmarish pumpkin and a carving knife, but this jack-o’-lantern jaunt is not quite as innocent as the ones taking place this spooktacular season.

Robert Gleason took a stab at the artwork for the original one-sheet and subsequently produced one of the greatest masterpieces of the genre. The plain black background contrasts with the stark white font and central images. The flaming pumpkin and killer holding a knife blend together seamlessly, with finer details such as the pulsing veins of the hand adding to the intensity.

The mask of villain Michael Myers may not be present, but the tagline with an italicized “He” is enough to give anyone a sleepless night. 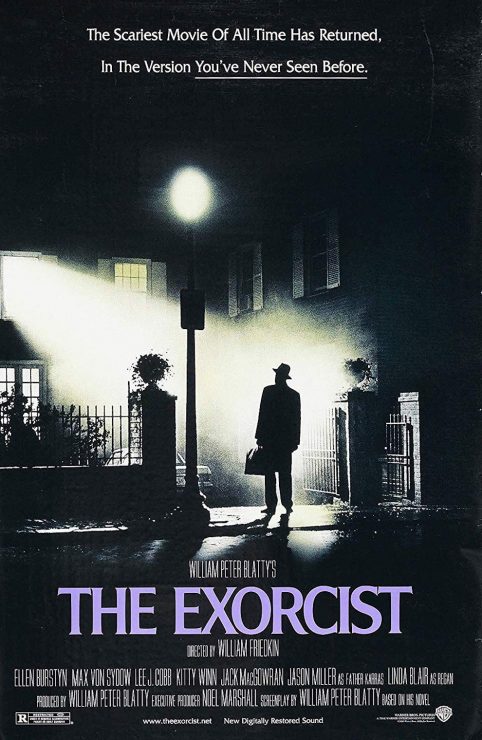 The Exorcist is another legendary horror movie with an iconic poster that has been etched into our minds forever.

Bill Gold, the pro­lific poster artist responsible for the unnerving image, uses light and shade to evoke a sense of mystery and fear. The central protagonist is silhouetted from a flood of light pouring out of a nearby window, representing the classic battle of good versus evil. The dark and misty background enveloping the scene adds to the spooky atmosphere and feeling of isolation.

The design is pinned down with the most simple and elegant text showcasing the novelist, movie title and director’s name, amongst others. 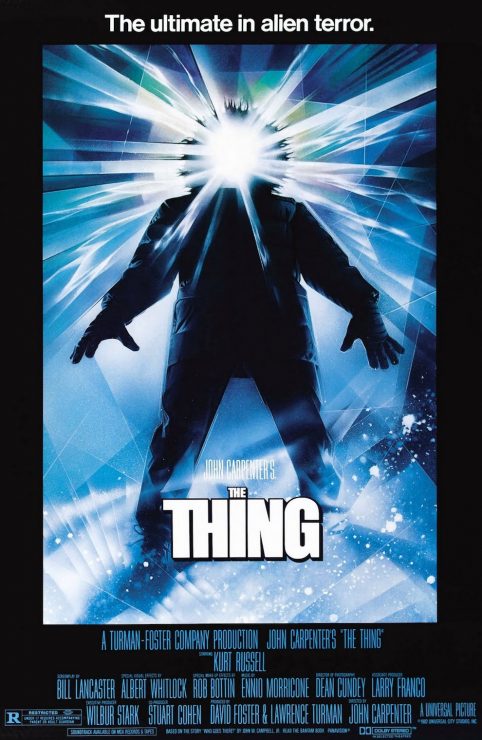 The poster for John Carpenter’s The Thing is an undeniable classic, brought to life by Drew Struzan, an American artist known for his more than 150 movie posters.

A master of conveying emotion through powerful imagery rather than words, it took Struzan just 24 hours to deliver the final artwork from the original telephone briefing. It perfectly captures the claustrophobic feeling of the ice-bound surroundings of the story by paralyzing the silhouette of one of the researchers in a jagged prism of blues and whites.

In place of his face, a bright light emits from the fur-lined hood of the character’s jacket, removing his identity and hinting at the entity’s shape-shifting abilities. A black border further imprisons the image while exposing the tantalizing tagline: “The ultimate in alien terror.”

What’s your favorite horror movie poster?  Let Your Geek Sideshow and tell us in the comments!