The Marvel Studios machine shows no signs of slowing as fans prepare to reunite with Clint Barton, codename Hawkeye, in an all new series that is set to introduce fans to another sure-to-be-favorite hero — also called Hawkeye!

Comics readers may already be familiar with Kate Bishop as one of the beloved Young Avengers who seem to be slowly coming together across the various television and film projects in Marvel’s next phase of projects. She has grown from a lovable hero-hopeful to a certified butt-kicker and private investigator on par with the likes of Jessica Jones herself, becoming a mainstay in modern Marvel comics.

Additionally, the archer-turned-Avenger Clint Barton has one of the comparatively normal lives among his team of super spies, gods, mages, and billionaires. Audiences got a hint of this across Avengers: Age of Ultron and Avengers: Endgame, but as he seeks to reunite with his children and wife for the holiday season, we’re going to get to see a bit more of his off-the-clock antics that were really brought to the forefront with one of Marvel’s most acclaimed comic books to date.

Let’s stay on target here. If you’re aiming to meet Hawkeye and Hawkeye (and Pizza Dog!) before the Disney+ show debuts, here are five essential graphic novels from Marvel to brush up on your bow and arrow knowledge: 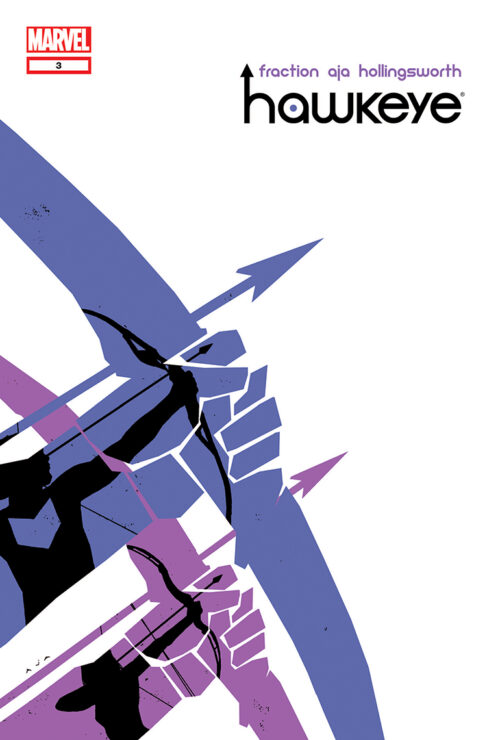 Why Read This?: Bro. Bro, bro, bro. Chances are, you’ve heard this one recommended a million times, but trust us, it’s worth it. Not only is this Hawkeye series one of Marvel’s most highly praised comics of all time, but it genuinely redefined the last decade of comics publishing. With a sincerely humanizing approach to the avenging archer, his protégé Kate Bishop, his strained relationship with brother Barney Barton, and the introduction of the goodest boy Lucky (AKA Pizza Dog), this series packed a punch bigger than one of Clint’s trick arrow tips.

This series not only boasts beautiful art and writing, but features innovative issues like one entirely from Lucky’s non-verbal perspective, and an entire issue based around communication through American Sign Language (given that in the comics, Clint Barton is partially deaf from an incident with a sonic explosive arrow). Fans will find plenty of engaging cameos and guest stars as well, from the stellar trio of Clint’s exes — Bobbi Morse (Mockingbird), Jessica Drew (Spider-Woman), and Natasha Romanoff (Black Widow) — to new characters like Clown, an incredible and chilling villain. What starts with Hawkeye buying a building to protect its tenants from the local mafia becomes a very grounded yet still pulse-pounding adventure through the life of one of the most outwardly mundane super heroes in Marvel’s New York.

The majority of Marvel Studios’ visual marketing for the live-action show has taken cues from David Aja’s striking design sensibilities, and the trailers for the Hawkeye series even promise the appearance of the infamous Tracksuit Draculas, bro. While the first volume is titled My Life as a Weapon, the whole comic series, simply titled Hawkeye, is available in an omnibus format so you can read it all in one sitting. 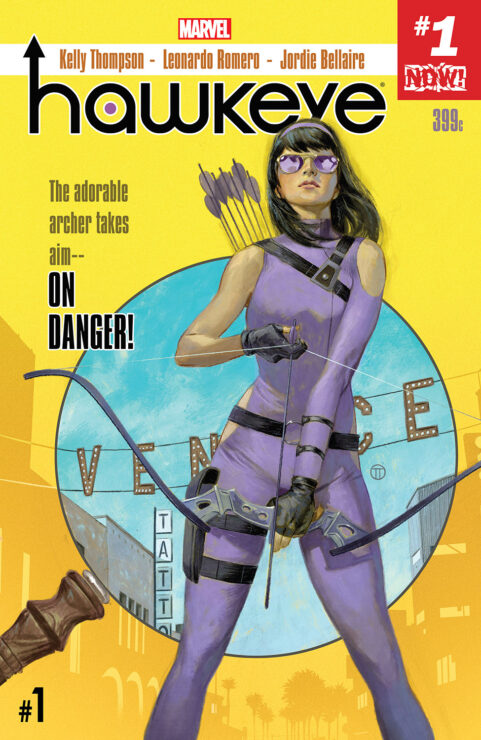 Why Read This?: As a writer, Kelly Thompson has become synonymous with the modern Kate Bishop. She took on the character’s first ever solo series and sent the archer packing to Los Angeles (following the Fraction/Aja run), where she sets up shop in Venice Beach, California as an investigator. Despite coming from a wealthy background, Katie Kate has a hard time stepping out of the shadow of “The Real Hawkeye” and hacking it with the locals. Plus, she’s cut off from her dad’s checkbook, so it’s good old hard work and elbow grease that will get this job done.

This series features a number of fun cameos, as Kate takes on the investigator lifestyle and gets a visit from another mentor figure — Jessica Jones. The surly super hero dealt a lot with the Young Avengers in their early days, but Jessica and Kate get even more bonding time as they take on a dragon in the Hollywood Hills. Plus, her guest spot in the book was Thompson’s own writing test to take on Jessica Jones in her stellar solo series after Brian Michael Bendis departed Marvel.

The non-New York setting opens up some more fun opportunities to see this archer really shine as she takes down California cults, deals with superstar wannabes, and interacts with the weirdos of Venice Beach (there are plenty). She also makes new friends who play into another pick on this list, West Coast Avengers. 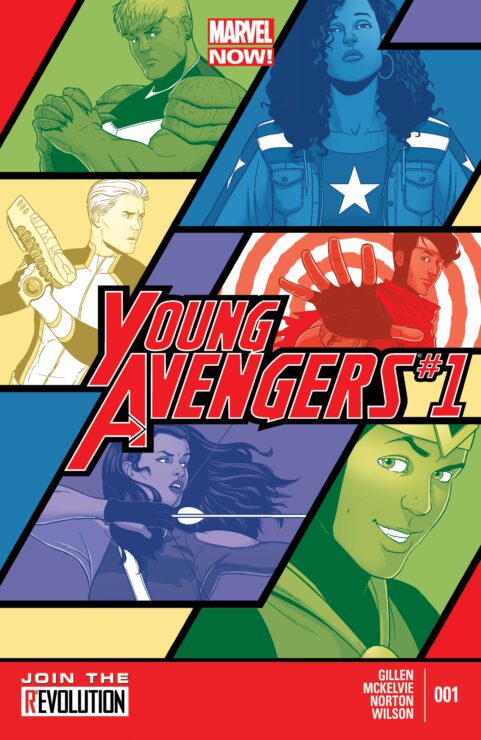 Why Read This?: If you’re looking for Kate Bishop’s first-ever appearance, you could start with Young Avengers: Sidekicks (the series by Allan Heinberg and Jim Cheung that started it all), but for the second iteration of this team that fans are predicting will make its way to the MCU sooner rather than later, you’ll want Gillen and McKelvie’s stylish, rule-breaking run that reinvigorated the teenage lineup for Marvel Comics.

Starring Kate Bishop alongside Kid Loki (seen in live action during the events of Loki), America Chavez (soon to debut in Doctor Strange in the Multiverse of Madness), Wiccan and Speed (Wanda’s twins Billy and Tommy, seen as 10 year olds in WandaVision), Noh-Varr AKA Marvel Boy (an ex of Kate’s and a Kree fighter), and Teddy Altman AKA Hulkling (the Kree/Skrull hybrid who fans are hoping will appear in the Secret Invasion series), this book shows the young team stepping out of the sidekick shadow, away from their Avengers mentors to traverse a complicated existence filled with evil parents, a mind-melting multiverse, and the trials and tribulations of being hormonal heroes.

While the series only saw three volumes before its all-too-early ending, it still comes up as a frequent favorite of the last decade and makes the perfect primer to the Young Avengers. We also see the beginning of one of Kate Bishop’s most important friendships, which is with America Chavez. Read this one with a healthy serving of space diner breakfast and you’re all set. Pancakes? Pancakes. 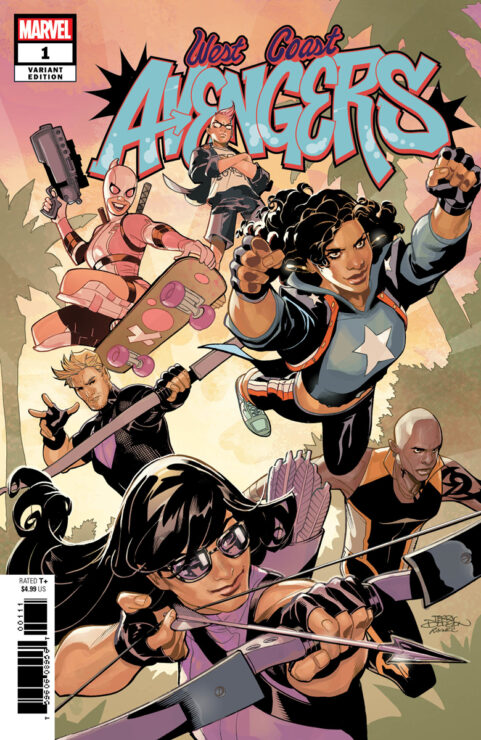 Why Read This?: Kate Bishop likes it so much in California she decides to set up shop with a new team under the classic code name West Coast Avengers (originally founded by Hawkeye. No, the other one). Coming after Kate’s solo title, this short-lived series really shined thanks to Thompson’s signature wit, capturing both Bishop’s sass and Barton’s modern dork persona. Throw in America Chavez, the sassy psychic mutant Quentin Quire, the unpredictable Gwenpool, plus newer heroes like Johnny “Fuse” Watts, and you’ve got a recipe for lighthearted fun on the beach — oh, and did we mention everyone’s favorite domesticated science experiment, Jeff the Landshark?

Unlike the Young Avengers before it, this iteration of the West Coast Avengers is led by Kate since they’re based out of her investigative offices. This series introduces even more family drama to Kate Bishop’s backstory while also highlighting the challenges of being an Avengers team not funded out of Tony Stark‘s pockets. The solution? Reality television. Nothing could go wrong.

With only 10 issues in total, this quick read is worth picking up to see what the future could hold for Kate Bishop as the Marvel Cinematic Universe continues to expand. Not to mention, her dynamic with Clint Barton is solid and the unconventional cast makes for an entertaining adventure along the golden coast. 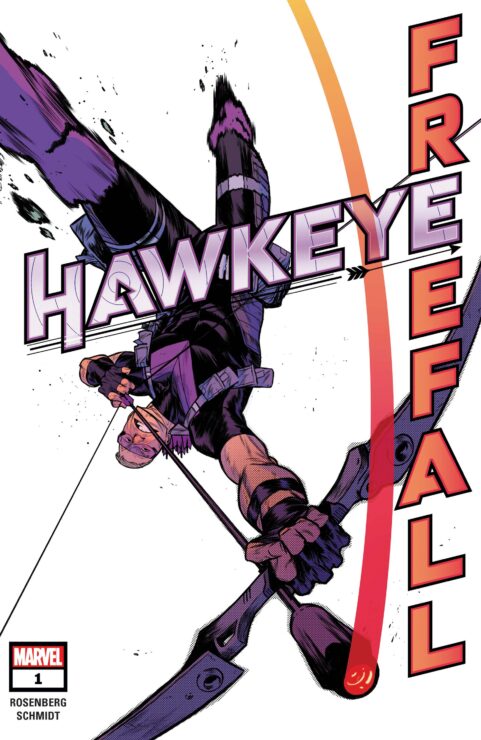 Why Read This?: Remember Hawkeye’s Ronin persona? Well, this series takes a look at what happens when someone else takes up that mantle for better or worse. Without Clint Barton’s permission, a new Ronin is tearing through the streets of New York, besmirching the good Barton name!

For fans who loved the previous street level Marvel television series (think Daredevil and Jessica Jones), this similarly grounded look at Hawkeye’s time away from the big team revisits Clint’s clashes with the mafiosos who like to exploit the little guys. While slightly darker in overall tone when compared with the Fraction/Aja run, this six-issue limited series is a solid mystery with plenty of twists, turns, and irreverent quips, as have become the archer’s custom.

Hawkeye: Freefall also features a solid guest cast, including Night Nurse, Daredevil, Spider-Man, Captain America, and the villainous Parker Robbins, AKA the Hood. We won’t spoil the mystery of who is running around as the Ronin, but it might be worth revisiting this former Hawkeye codename before the Disney+ series hits — they never did quite resolve the consequences of Clint’s vigilante murder-spree between the Snap and the Blip.

Now that you’re an expert on all things archery, what is your favorite trick arrow (and why is it the boomerang arrow)? Be sure to learn all about the Hawkeyes’ arsenals with these comics and get ready to watch along when Hawkeye debuts on Disney+ on November 24.

Will you be tuning in? Tell us in the comments and don’t forget to Let Your Geek Sideshow!