I’m sure you’ve already heard of The Expanse. Well, unless you live under a rock. It’s the sci-fi series that almost crashed and burned after Syfy axed it.

Thankfully, Amazon Prime swooped in and saved The Expanse from the brink of extinction. Now, after a phenomenal fourth season on the streaming giant, The Expanse will be returning for Season 5.

So, if you’ve been on the fence about it, might I suggest diving headfirst into the best sci-fi show of the decade? Now, this is merely my opinion, but not to worry — I have concrete evidence to back this up. Here are 5 reasons why you should be watching The Expanse.

The Expanse is a televised adaptation derived from James S.A. Corey’s series of novels. The story takes place a few centuries into our future, wherein space exploration is highly advanced. People live on the Moon. Mars has been terra-formed. There’s even folks living on planetary moons and space stations nestled amid asteroid belts.

Earth now has a president who serves the entire planet. Political tension is brewing between Earth and Mars. If war broke out between the two planets, Mars would decimate Earth. They have advanced military and weaponry. They’re the planet of war, after all.

A young woman named Julie Mao encounters a strange blue substance that’s responsible for slaughtering her entire crew. Then, she herself goes missing. As it turns out, she’s the daughter of an exorbitantly wealthy Earth inventor. A detective named Joe Miller, who resides on Ceres station in the asteroid belt, embarks on a mission to find Julie. Meanwhile, James Holden and his crew receive a peculiar distress signal from a derelict ship. Holden and his crew are eventually ambushed by Martians, which adds fuel to the fire burning between Mars and Earth.

What transpires is an all-out, cataclysmic, almost-war situation between the two planets and The Belt (the cluster of asteroid belts where blue-collar miners reside). Holden is wedged in the middle of it all, while Miller continues down a perilous path to find Julie. Both Earth and Mars fight over the aforementioned blue substance because it could potentially be weaponized.

And that’s just the tip of the iceberg. It’s a compelling, highly imaginative story that could feasibly unfurl in our own future. The Expanse explores religion, politics, and the morality of humankind. It’s all too relevant and relatable to our current social climate.

Essentially, it has every thematic element you want in a good sci-fi series. An intricately established mythology and clever writing. The Expanse will literally keep you on the edge of your seat. It’s thrilling action, high-stakes adventure, and gut-wrenching drama.

Perhaps it’s because I studied acting in college, but one of the first things that reels me in to a show is a good performance. Brilliant acting can be captivating. In addition, it can draw you into a story and hopefully keep you there. The Expanse boasts some truly exquisite acting, and I don’t use that word lightly.

Thomas Jane, for starters, breathes life into Joe Miller, a morally grey character with a fascination for a missing heiress. Jane is known for portraying gritty characters with questionable morals and ice running through their veins. He shines here as Miller and makes us empathize with him. He evolves into a character you come to love. Oh, and he emulates a stereotypical “film noir” detective of the 1930s. He even sports a snazzy fedora!

The actor who plays Holden, Steven Strait, isn’t a slouch in the acting department by any means. He brings a quiet storm to Holden — a man who has the whole universe watching him. Strait injects Holden with a stoicism concealing a burning rage beneath the surface. You believe he could explode at any moment.

Another highlight is Shohreh Aghdashloo’s character, Chrisjen Avasarala. She works for the United Nations and is entrenched in the political tango between Earth and Mars. Avasarala is brazen and bold. She never shies away from speaking her mind and has the mouth of a sailor. Aghdashloo is an utter joy to watch. You can tell she truly relishes playing Avasarala, which makes it fun for us as viewers.

Belter Camina Drummer, portrayed by Cara Gee, is another favorite of mine. She’s rough around the edges with equal parts bark and bite. She inadvertently becomes the face of the Belt and their quest for equal rights like their Earther and Martian counterparts. Gee gives Drummer all the piss and vinegar of a dude in a biker gang. It’s downright mesmerizing and a mite frightening. I wouldn’t want to encounter Drummer in a dark alley.

Visually, you won’t find a more stunning show than The Expanse. There are sweeping views of the stars and intricately detailed space ships. Shots of planets like Mars and Jupiter that look so real I feel like I’m really there in close proximity to them. Even a skillfully imagined colony on Mars that gives me major Blade Runner vibes.

I think I’m the most impressed any time a character embarks on a spacewalk. When they’re repairing their ship while in space or walking across Mars’ rocky terrain. It’s so immensely detailed. Again, they recreate space and the act of traveling in it with such realism. Now, for the most part, The Expanse has nailed the details regarding life in space. The science is almost exact, which is not something that every sci-fi series can boast.

So, if you like pretty imagery, shiny things, and bulbous planets, then The Expanse is for you.

Composer Clinton Shorter crafts an epic score reminiscent of Hans Zimmer and James Horner. From larger-than-life orchestral sounds that accompany a fight scene to soft, romantic strings setting the tone for a dramatic moment, Shorter curates a lush score with a wide variety of styles.

One song in particular from Season 2, titled “Milowda,” may be my favorite track from the series. Of course, the moment it complemented was a punch to the gut, but the music accompanied the scene perfectly. I’m a sucker for a good cello. Another thing that usually stands out to me is a show’s score. Sometimes the score has to appeal to me, otherwise I won’t watch the series. That may sound dramatic, but my name is Melody, after all.

In short, you’ll dig Shorter’s score if you like boisterous movie music. 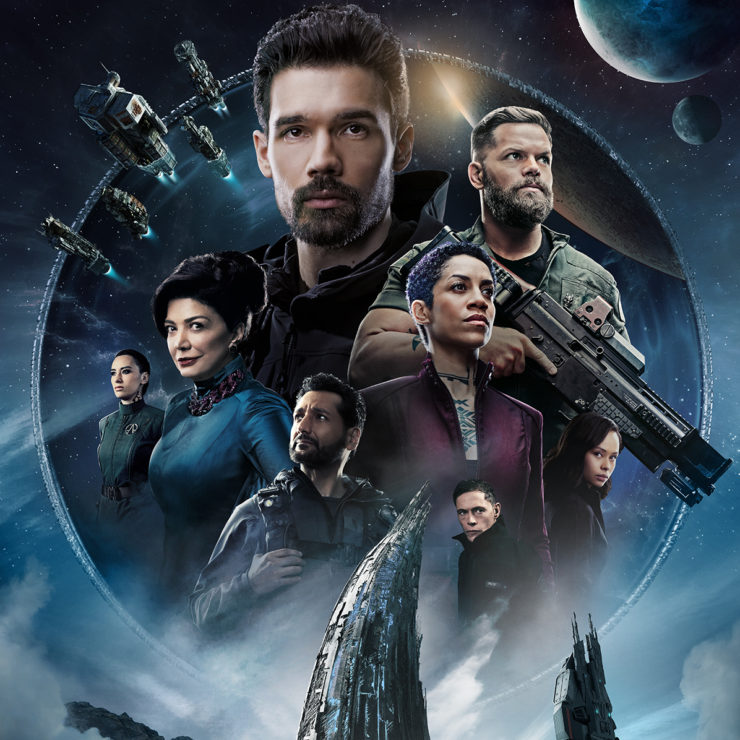 Representation across all mediums and on all spectrums is vital. The Expanse has that in spades. In fact, it has one of the most diverse casts I’ve seen on TV. Every main female character is a woman of color! In addition, the majority of the background characters/supporting characters are also people of color.

They also don’t “showboat” it or flaunt it in any way. Diversity isn’t treated as a major issue on the show because it’s not. Representation is the norm on The Expanse, which is how it should be now. It portrays a wonderfully colorful world akin to our own. If this is what the future looks like, if representation becomes so normal that nobody bats an eye, then I’m all in.

Are you watching The Expanse? Let Your Geek Sideshow and share your thoughts in the comments!

The Secret to Moff Gideon's Past, Star Trek Release Dates, and more!