A League of Their Own: The Best Indie Comic Movies

With the number of movies based on Marvel and DC characters growing each year, it’s sometimes hard to remember that these two publishing powerhouses don’t have a monopoly on comic book movies.

Since the beginning comic book movie renaissance, there have been plenty of successful attempts to bring independent comics and manga fare to the screen. In many cases, the movies go on to develop cult followings just like the comics they’re based on.

See for yourself as we present to you our list of some of the best comic book movies that aren’t based on Marvel or DC characters: Eric Draven was a regular guy who encountered a most unfortunate set of circumstances. He and his fiancée were attacked and killed on the night before their wedding. One year later, Eric Draven rises from the grave to enact vengeance upon those who cut his life short. Based on the comic series by James O’Barr, The Crow is a classic that still holds up well.

Created at a time when comic book movies weren’t the big-budget bonanzas they are today, The Crow is a more intimate story about grief, loss, and acceptance. Due to the untimely death of Brandon Lee during the production of the film, the series was unable to continue in the same direction. The Crow films that followed have not been as great, but the magic of the original still remains. In the final days of World War II, the demon Hellboy is conjured from another realm to tip the scales in favor of the Germans. Captured and raised by the Allied forces instead, Hellboy works alongside his superpowered colleagues in the Bureau for Paranormal Research and Defense to maintain balance in the world.

The steampunk-inspired world of Hellboy films is one in which supernatural threats lurk around every corner. While the recent reimagining of the Hellboy series failed to impress either fans or critics, the original movies transported audiences to a world that strangely reflects our own. Hellboy and its sequel, Hellboy II: The Golden Army, both serve as excellent examples of comics brought to life.

Scott Pilgrim vs. the World Scott Pilgrim vs. the World is the story of a guy who must defeat a series of evil ex-boyfriends in order to win the girl of his dreams. Inspired in equal parts by comic books, video games, punk rock, and the slacker ethos, Scott Pilgrim vs. the World is funnier than most Marvel movies while delivering just as many thrills. It’s part teen comedy, part awkward romance, and part supercharged action-adventure.

The action sequences, with their overlaid graphics and arcade-style sound effects, remind viewers that the movie has its foundation squarely set in geek pursuits. Scott Pilgrim vs. the World is a great pick for anyone who likes comic book movies that are just as much about superheroes as they are about relationships. That’s exactly what Wesley Gibson opts to do in Wanted, a pulse-pounding movie based on the Top Cow comic of the same name. Despite the movie’s inherent action sequences, the far-out premise gives way to a more grounded story about the lives we choose to lead. Featuring Angelina Jolie at the height of her popularity, Wanted elevates comic material to blockbuster action movie status. There’s one simple fact that all comic aficionados know: Judge Dredd is the law. In charge of patrolling Mega-City One and serving as judge, jury and executioner to all who run afoul of the law, the judge with the permanent scowl is a force to be reckoned with. Trapped in a high-rise building as he confronts a notorious drug lord and her minions, the story of Dredd is smaller in scope than one might expect from a Hollywood movie; but it is also a more honest translation of the material than the previous movie Judge Dredd, featuring Sylvester Stallone.

Since its release, Dredd has developed a cult following and left fans clamoring for more. While there has been talk of a sequel for years, nothing has yet materialized. Given the character’s long-standing popularity, however, it’s likely that this isn’t the last we’ve seen of Dredd.

Valerian and the City of a Thousand Planets Based on the French comic, Valérian et Laureline, Valerian and the City of a Thousand Planets tells the story of Major Valerian and Sargeant Laureline as they traverse the galaxy on a mission to recover items that can save a civilization on the verge of extinction. They encounter exotic aliens and a host of other interesting characters as they work to complete their mission.

Written and directed by Luc Besson, the writer and director of the ever-popular Fifth Element, Valerian had some big shoes to fill. Perhaps unfairly compared to the director’s earlier work, Valerian didn’t soar as high as producers expected. Even so, there’s a lot to be said for Valerian and the City of a Thousand Planets. It blends pulpy thrills with comedy, action, and romance. The visual effects are often stunning, and it has a memorable opening sequence that wowed most audiences. 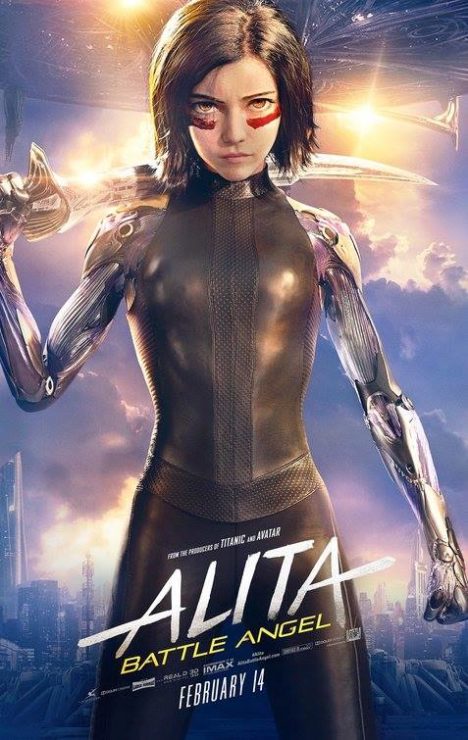 Alita: Battle Angel is manga brought to life. The movie takes place on a post-apocalyptic Earth where technology reigns supreme. Living in the wake of a great war, Alita is a deadly cyborg with no memory of her past, fighting in the rough world she finds herself in to establish relationships and reclaim her identity.

The effects-heavy film captures the spirit of the source material and injects it with over-the-top action sequences. For fans of futuristic, cyberpunk tales, Alita is exactly what the doctor ordered. The film performed well enough to warrant a sequel, and talks are presently under way to make that a reality.

What’s your favorite movie that’s based on an indie comic? Let us know in the comments below!