Hard to believe, but the iconic film Who Framed Roger Rabbit had its 30th anniversary this year.  Originally released on June 22, 1988, the film was a huge box office sensation and became the second highest grossing film of the entire year. Not only that, the live-action and cartoon hybrid film won numerous awards for its special effects and ingenuity, including three Oscars (Best Visual Effects, Best Film Editing, and Best Sound Effects Editing). It was also the most expensive movie ever made at that time.

So p-p-p-p-please hold on to your hand buzzers and disappearing ink, because here come some amazing facts you may not have known about Who Framed Roger Rabbit?. 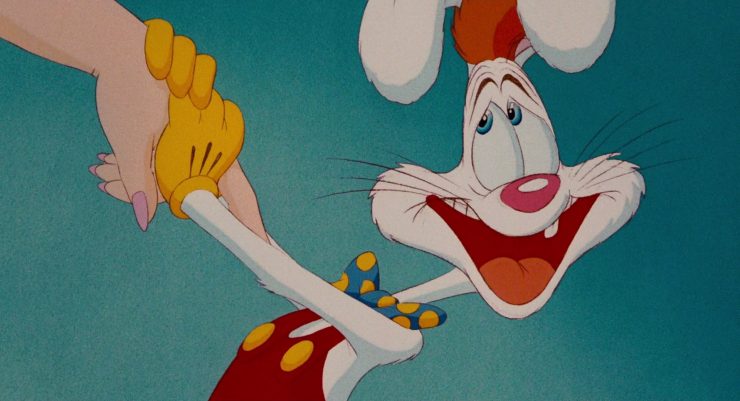 Yes, it’s based on a book, but the similarities are few.

In 1981, Disney bought the film rights to a book called Who Censored Roger Rabbit? by Gary K. Wolf.  In the novel, newspaper comic strip characters are real and live their daily lives alongside humans. Eddie Valiant, a hard-boiled detective, is hired by one such comic character, Roger Rabbit, to find out why his bosses at the newspaper syndicate won’t give him his own strip. Unfortunately, before Eddie can crack the case, Roger is murdered and the detective is dragged into a four-color world of deceit, double-crosses, and killer cream pies. 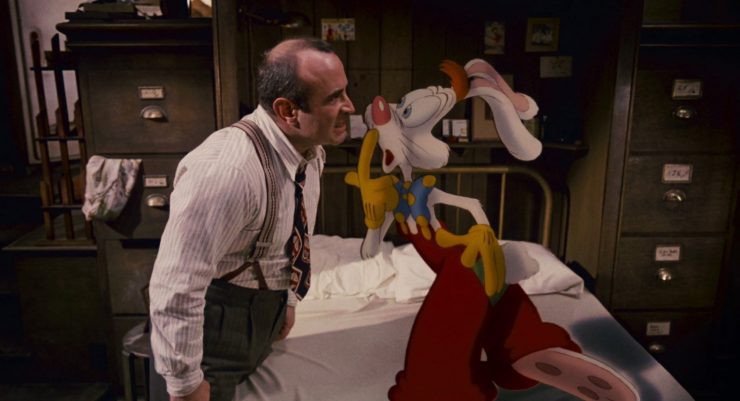 Needless to say, the film version made… a few changes. Okay, all the changes. In fact, the only real similarity is that Eddie is still a detective, but even then, his story is given more depth with the tragic loss of his brother and his own grief-driven self-destruction. Roger is made into a more sweet and lovable character, versus the unlikable cad he was in the book. Jessica Rabbit plays with the same femme-fatale tropes as her counterpart, but the film version is ultimately shown to genuinely love her husband, which was quite the opposite in the book version, where she despised him.

Baby Herman also appears in the novel, but all the other memorable characters from the film, such as Benny the Cab, Judge Doom, and The Weasels, are absent from the book.

Maybe the biggest change was to the world itself, bringing classic cartoon characters to life instead of comic strip characters. Speaking of which…

Cameos… All the cameos.

Who Framed Roger Rabbit? is the only film where you will see Mickey Mouse and Bugs Bunny sharing screen-time together. And it’s not just them either. There are over 140 recognizable cartoon characters from the Golden Age of Hollywood in this film. So many, in fact, that each time you watch the movie you will likely find another character that you somehow missed on previous viewings. In my own most recent viewing, I caught Jose Carioca and Marvin the Martian for the very first time. 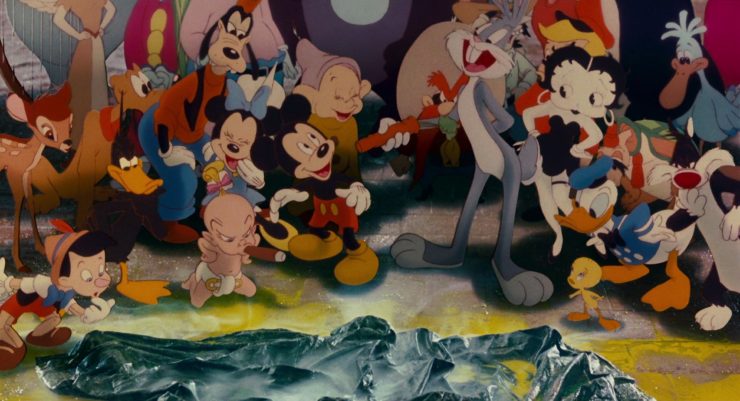 Never before had so many different characters from different companies been allowed to appear side by side in one film. That said, there were some notable absences too. Tom and Jerry, Popeye, Casper the Friendly Ghost, and Superman were supposed to be in the film but were unable to make it due to… scheduling conflicts.

Even so, you can thank one man for securing the rights to all these individual characters to appear in the movie…

In exchange for a share of creative control over the film and its characters, director Steven Spielberg and Amblin Entertainment were brought on by Disney to help produce the film. Spielberg himself negotiated the licensing rights with other studios to allow non-Disney characters like Bugs Bunny to appear in the film. He also brought on Robert Zemeckis (hot off the success of Back to the Future) to direct the film, hired Industrial Light and Magic to create the special effects, and put legendary animator Richard Williams in charge of the cartoons.

Even then, getting those other studios to agree to let their flagship characters appear in a  Disney production wasn’t easy.  Warner Brothers, for example, would allow Bugs Bunny and Daffy Duck to appear only if their iconic duo had equal screen time with Mickey Mouse and Donald Duck. This strict stipulation ended up creating one of the most memorable scenes in the entire film, the piano duel between Donald and Daffy. 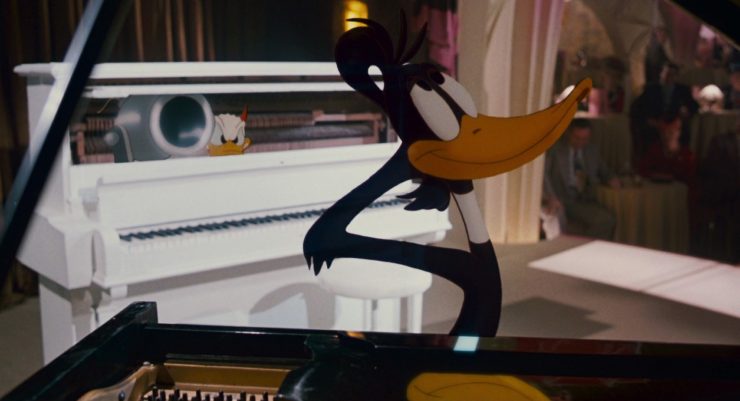 The toons weren’t the only whacky thing about the movie. The casting of the film came with its own set of quirks. For example, it’s hard to imagine anyone but the great Bob Hoskins as Eddie Valiant, however, he almost wasn’t even in the film.  Before offering him the role, the part of the hard-drinking detective was offered to Harrison Ford, Chevy Chase, Bill Murray, Sylvester Stallone, Eddie Murphy, and many others. 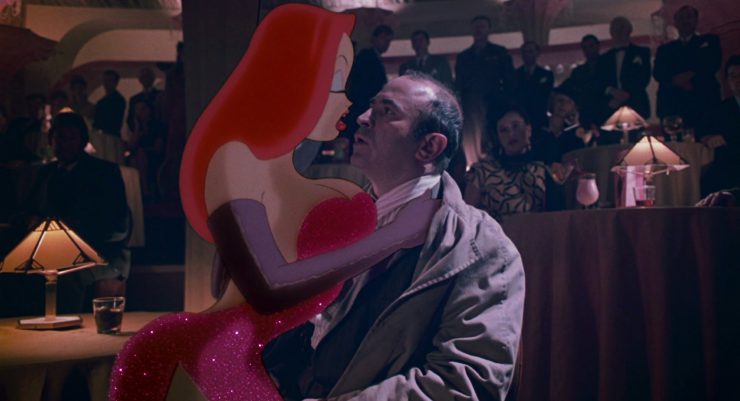 The seductive voice for Jessica Rabbit was provided by Kathleen Turner, however the actress goes uncredited for the role in the film’s credits. She is however listed as the voice of Jessica in all three subsequent animated shorts released later.  Actress Amy Irving provided Jessica’s singing voice for the unforgettable rendition of Why Don’t You Do Right?.

Comedian Charles Fleischer was brought on to play the titular Roger, as well as Benny the Cab and two of the weasels.  He got so into character that he insisted on wearing a Roger Rabbit costume while on set, just to shout out his lines to the other actors.

Seriously, there are so many things going on both in and around this film that we could talk about it for days and barely scratch the celluloid surface. Besides its many technical feats, the film is chock full of nostalgia, and rich with a love of animation history and film noir.

Given the home run success of the film and the reverence it now holds in our pop-culture lexicon, it’s no wonder that thirty years later, we still talk about its memorable characters, funny and exciting story, and amazing achievements. 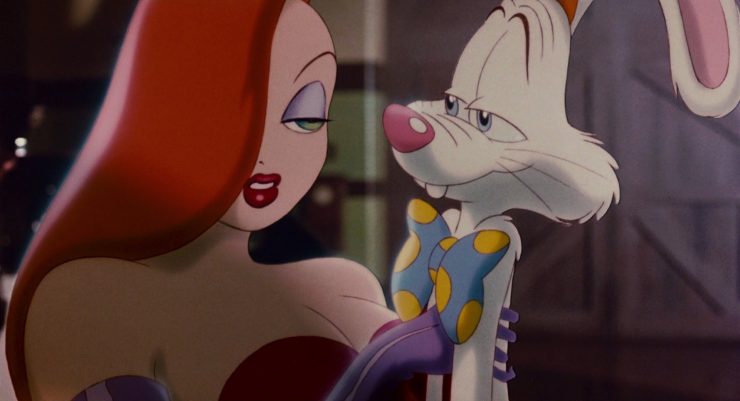 Jared Leto Cast as Morbius the Living Vampire, Gideon Falls Being Developed for Television, and More!