One of the most anticipated series of last year was certainly Netflix’s Chilling Adventures of Sabrina. Before its release in October, fans were full of burning questions about how the show would go.

We wondered about Salem. Would he speak like he did in the beloved Sabrina the Teenage Witch? Or, would Kiernan Shipka and Ross Lynch have as much chemistry as Melissa Joan Hart and Nate Richert did? Not to mention the most pressing question of all: had showrunners set up seeds for a possible Riverdale crossover?

Season 1 has come and gone. Some of these questions have been answered while others were only fanned, sparking more curiosity in many diehard CAOS fans. The good and bad news is that we can set our countdowns to April 5, 2019 for another wickedly fun season—but wait we must.

In the meantime, all there is left to do is revisit the best, most shocking, and juiciest moments in Season 1 of Chilling Adventures of Sabrina. Follow along and see if your favorite ‘OMG’ moment made the list.  Warning, chilling spoilers ahead!

Chilling Adventures of Sabrina immediately begins with a world that blends 1960’s fashion and light-hearted horror themes in perfect Halloween tone. The result is a kooky, kitschy mortal world that anyone would want to be a part of. It’s no wonder why Sabrina is having such a hard time choosing between her Greendale life and “the witch world of her family.”

Who wouldn’t want to take a sip and discuss the merits of a zombie flick at Cerberus’ Books and Spirits—a place where a guy and gal can refresh with a milkshake or elect to buy a demonology book?

Every Harvey Kinkle and Brina Moment

Unlike the ‘90s sitcom, fans did not have to wait to for Sabrina to muster up the courage to get the guy of her dreams. Episode 1 opens with Harvey and his Brina already snuggling at the movies. Soon after at a Halloween party, Harvey is dressed as a miner, twirling our favorite witchy protagonist in a darling little white dress.

But of all the countless moments that made viewers ship them even more, one that fans simply cannot get over is in Chapter Three: The Trial of Sabrina Spellman, when Sabrina asks Harvey to search her body for a birthmark. The couple may have already been smitten with each other at that point but the two had not taken the relationship to that level yet. Viewers watched with over-eagerness, matching Harvey’s own bulging eyes.

While Brina and Harvey’s interactions are relationship goals, Aunt Zelda and Father Blackwood’s were not—depending on your definition of fulfilling. That’s because these two don’t rendezvous at the local theater. The High Priest of the Church of Night and Sabrina’s stern aunt prefer meeting up for secret (and painful) satanic confessions.

Fans were not necessarily shocked to see the two icy personalities form deeper relations. However, no one knew their extramarital affair would be described as a penance of the flesh that punishes and pleasures. Zelda most definitely got her groove back in Chapter Eight: The Burial. 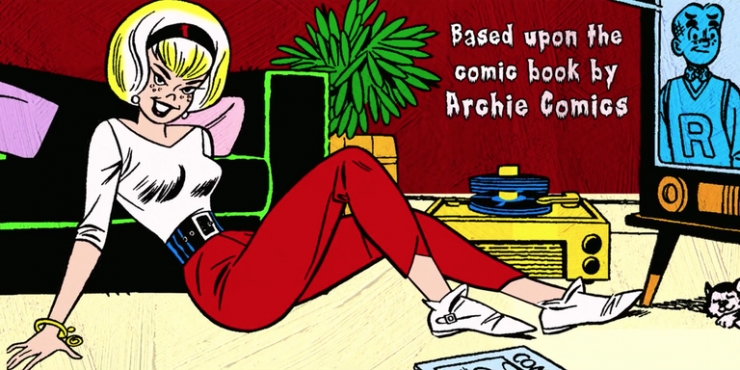 Of all the dire questions fans had before the release of Chilling Adventures of Sabrina, a Riverdale crossover was at the top of their list. We waited patiently for Easter eggs, any clues that would let us know if Riverdale and CAOS showrunner, Roberto Aguirre-Sacasa, was planting seeds for an en epic crossover.

Luckily, we didn’t have to wait long for our first Riverdale easter egg. The original, Archie comic book Sabrina watches a television screen featuring Archie and Betty in the opening credits. Season 1 wasn’t exactly filled with Riverdale references, but, if you knew where to look, they were there. Like, Jughead’s etching that says he was there, too. Wowza.

And let’s not forget a few episodes after that, when Ben Button actually is there, delivering pizza. We’ll just have to wait and see if any other Riverdale characters cross Sweetwater River for some chilling adventures of their own.

Er, yeah. Remember that time Sabrina got a little too on her high horse and assumed she had the power to resurrect Tommy Kinkle despite her aunts and cousin Ambrose’s multiple warnings?

Our little witch may have had all the right intentions but, just as her family had said, she was not able to fully bring back Harvey’s dearest brother. Instead, what she brought back after the mining accident was the merely the body of her beau’s brother. Tommy Kinkle was simply a walking corpse who eventually had to be killed…again.

If that wasn’t depressing enough, this was the straw that broke the camel’s back, a.k.a Harvey and Sabrina’s perfect relationship. We’ll just have to wait and see if the two rekindle their seemingly perfect love in Season 2.

One of the most memorable series quotes is in episode 2 of CAOS. In Chapter Two: The Dark Baptism, despite every Greendale witch and warlock imploring Sabrina to sign the Book of the Beast, Sabrina refuses. “My name is Sabrina Spellman and I will not sign it away!”

The half-mortal, half-witch is headstrong and demands to keep both her freedom and power by not signing her allegiance to the Dark Lord—it’s the reason why so many of us mere mortal viewers look up to the show’s fiery protagonist. And all the more reason we were absolutely caught off guard in the season finale, Chapter Ten: The Witching Hour, when she finally succumbs to signing her name in the Dark Lord’s book.

Sure, a lot of the blame could be put on Miss Wardell, Satan’s very own personal assistant. But, by the looks of the newly platinum blonde hair and all black attire that Sabrina sports, I’m thinking this is a witch who knows what she’s doing—and maybe she’s not as squeaky clean as she used to be.

We can only speculate what these things will mean for Season 2, which begins streaming on Netflix in April 5 2019. In the meantime, let us know which CAOS moments stunned, awed, or spellbound you in the comments below!