With its opening weekend earning $143 million, Thor: Love and Thunder came in swinging that mighty hammer. As the sixth film in Marvel’s Phase Four, and the fourth Thor standalone film, Love and Thunder had a lot to live up to, namely the heart and humor that Thor movies have come to represent.

Directed by Taika Waititi, Thor: Love and Thunder introduced Jane Foster as Mighty Thor into the MCU. This idea was lifted from Jason Aaron and Russell Dauterman’s fan-favorite comics run that began in 2014, adding new layers to the title of Thor. Whosoever reads this article, should they continue, shall possess the worthiest quotes from Thor: Love and Thunder.

“Funny, it doesn’t feel like a curse. It feels like a promise, so this is my vow: All gods will die.” – Gorr

After watching his daughter die in his arms, Gorr loses all hope. He wanders across his desolate planet until he reaches an oasis and meets Rapu, the god he had worshipped and prayed to for rescue. Rapu shuns Gorr and in that moment, Gorr sees all gods for what they often are: selfish beings of extravagant power. Once Gorr picks up the Necrosword and makes swift work of Rapu, his chilling transformation into the God Butcher is complete.

Jane’s true worthiness in wielding Mjolnir is her powerful independence. She has never waited around to be saved by someone else, even Thor, when she knows she’s perfectly capable of saving herself. That’s why she takes it upon herself to find a solution to her cancer — even if that solution isn’t based in earthly science. 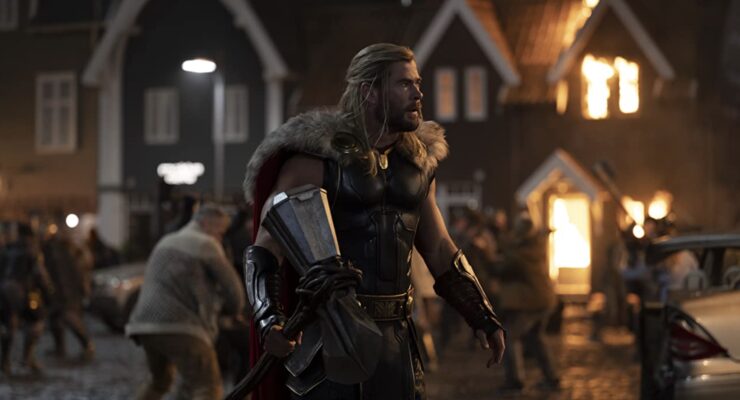 After years of speculation and awkward questioning, Thor: Love and Thunder finally sheds some light on the time that Thor and Jane spent as a couple. When he first sees Jane again, Thor is at a loss for words, though he remembers exactly how long it’s been since they last spoke. The quick recollection of numbers really speaks for itself.

Jane lost her mom at an early age, but she has always remembered the advice that her mother gave her. These words of wisdom prove to be a source of inspiration for Jane in her battle with cancer as well as her journey as Mighty Thor. Though it’s not always the easy decision to make, the will to keep fighting always keeps victory within arm’s reach.

“I love being king and I love my people, but it’s all meetings and ravenmail and meetings that could have been ravenmail.” – Valkyrie

While Valkyrie is absolutely qualified to be King of New Asgard, and the land is clearly flourishing under her eye, she still feels like something is … missing. The toils of bureaucracy and capitalism have gotten to her, which is why she jumps at the first chance for adventure. We all know what she’s talking about, too. Most meetings should certainly be kept to ravenmail.

“That’s the sound of lightning.” – Thor

As Thor points out, it’s true what they say: Never meet your heroes. When he brings his crew to Omnipotent City to seek help from Zeus, Thor is let down by the reality of the Olympian. Thor had looked up to Zeus as a shining example of what it meant to be a god. In reality, however, Zeus is self-serving and cowardly. Though the Olympian tries to strike Thor down, it’s the Asgardian God of Thunder who puts Zeus in his place. 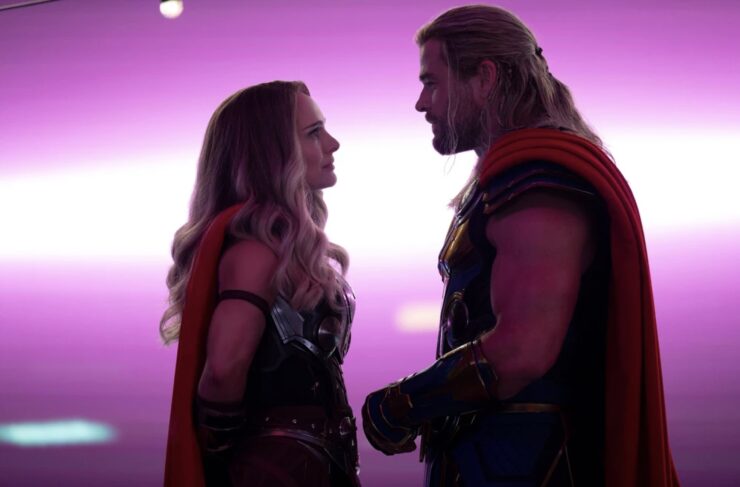 The world of a Thor is very centered around one virtue: worthiness. To be worthy is an ongoing battle, full of introspection and love and humility. And just because one has been deemed worthy in that past does not mean they are forever worthy. This lesson is one that Thor continues to treasure because his beloved Jane Foster gave it to him.

Gorr is shaped by his suffering. He has allowed his heartache to fester into hatred, and he believes that love is actually pain. In his misguided mission to rid the universe of all gods, he gives Thor an ultimatum: Give him Stormbreaker or lose the people he loves. Like another worthy hero once said, Thor doesn’t trade lives. He lets Gorr take Stormbreaker but love isn’t done fighting yet. 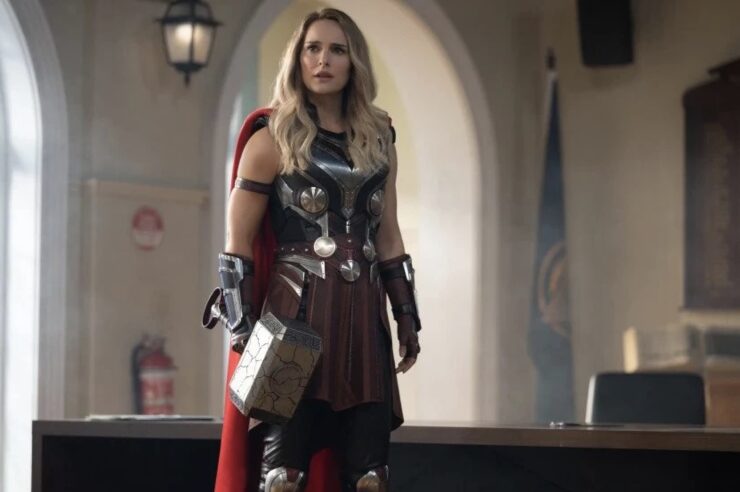 Jane Foster found her footing as Mighty Thor with ease. She wields Mjolnir in different, awe-inspiring ways than Thor Odinson ever did and she never stops fighting. However, her catchphrase game could use a little work. By the film’s end, she fights Gorr on her own, who seeks to diminish her worth by calling her “Lady Thor.” Instead, Mighty Thor lets the God Butcher know exactly how he can address her before letting loose an iconic catchphrase. Mjolnir is definitely on the menu.

As Mighty Thor, Jane flies around the world twice and knocks through anything in her way. She’s a force to be reckoned with. As Dr. Jane Foster, Jane is equally as powerful, though with a different set of tools. Her knowledge carries her through tough situations and her enduring love, even for the daughter of a despised enemy, lets Jane guide the power of Eternity back toward the light.

Across the Nine Realms and beyond the halls of Valhalla, the quest for worthiness will always be there. And those who are willing to pick up the pieces and fight the good fight will always have a seat among heroes. Thor: Love and Thunder shows that a hero is more than their weapon or their title; a hero is their actions and their love.

Which quotes from Thor: Love and Thunder were your favorites? Join the conversation alongside other Marvel fans in the Let Your Spoiler Sideshow Facebook Group, and don’t forget to Let Your Geek Sideshow!

Star Wars Comics That Would Make Excellent Movies or TV