For most of us, Christmas is an expensive time of year. Between the complexities of the gift-giving game, stocking up on excessive amounts of food, and attending social gatherings on the regular, our piggy banks often end up looking as depleted as Santa’s sack after his annual present drop.

However, if you find the sight of your hollow hog distressing, you might want to take a moment to consider the feelings of Peter McCallister, Kevin’s father in Home Alone. Throughout the season of spending, he has every reason to be checking his bills (and checking them twice).  In truth, we wouldn’t have been surprised if the McCallister clan had been forced to put their luxurious home on the market following all of the expenses that were incurred during Kev’s solo stint. Yet, the real estate signs never seemed to make it onto their perfectly groomed front lawn.

This got us thinking-slash-hyperventilating over the insane amount that Peter McCallister must not only be raking in but also shelling out on a frequent basis, particularly over the course of Chris Columbus’ two madcap Christmas capers, which are both filled with holiday hijinks and extravagant expenditure.

Thanks to the good folks at Esquire, we have been able to put together a timeline of events and a breakdown of their associated costs for the les incompetents out there. So grab your calculators, count the coins and keep the change, ya filthy animals. 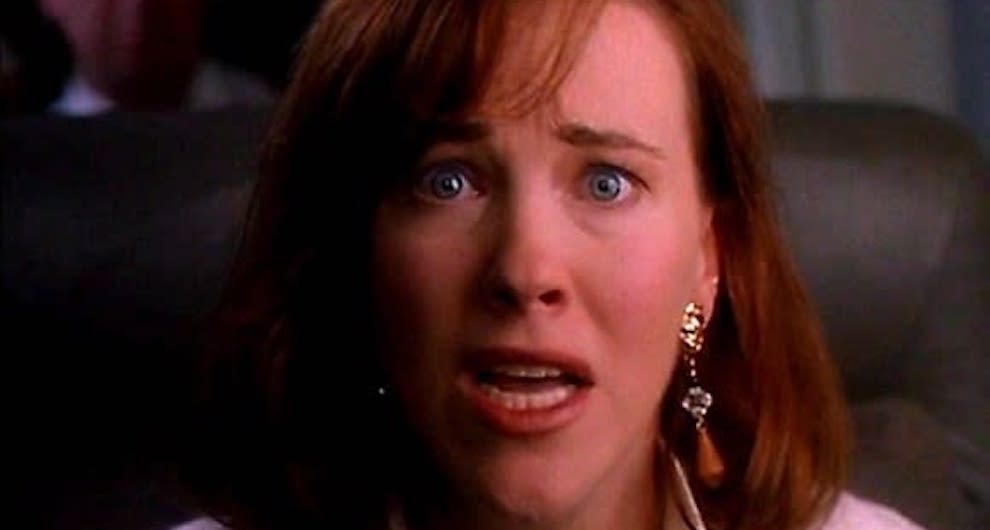 Home Alone begins with the McCallister family franticly preparing for a holly, jolly Christmas vacation to the French capital.

Once on-board their non-stop, round-trip flight with American Airlines, the kids are left to have “the time of their lives” back in coach while all accompanying adults take advantage of the extra perks built into their first-class fare, not least of which include some self-gifted crystal salt and pepper shakers.

This booking alone accumulates to 11 regular tickets and four premium seats solely for the first leg of their journey. Based on today’s prices, this would approximately equate to an eye-watering $35,320, without factoring in additional checked luggage charges, passport fees, and spending money for the trip.

Très expensive if you ask us!

‘Twas the night before their big city break, when all through the house, hungry guests made their way to the kitchen and started to pout.

Thankfully, Buzz had the hindsight to place an order with Little Nero’s Pizza takeaway amid all of the chaos. The delivery boy turns up with a leaning tower of ten pizzas, featuring an assortment of toppings but an extremely limited amount of plain cheese, which just so happens to be Kevin’s all-time favorite.

At around 12 bucks per pizza, this family feast tallies up to $122.50 plus tip, which, by today’s standards, would be $228 (give or take a cent or two). Peter’s brother, Frank, was certainly not quick in coming forward to dish out the dough, so Kate reached for her purse to cover the cost in cash, rather than “travelers cheques.”

We guess all’s fair in love and pizza.

In Home Alone, Kevin devises an elaborate Battle Plan full of ho-ho-horrors for Harry and Marv, also known as The Wet Bandits.

It may well be his house to defend but Kevin also systematically destroys the place on the night of the break-in. He uses a variety of heavy objects and sticky substances to create a funhouse of torturous booby traps for the unsuspecting duo.

It’s safe to say that Kevin’s father would need to replace the basement staircase after it was smothered in tar and fix-up Buzz’s room since the shelving was ripped out of the wall. Together, this would probably come in close to $1,500 without taking any minor damages or cleaning costs into consideration. 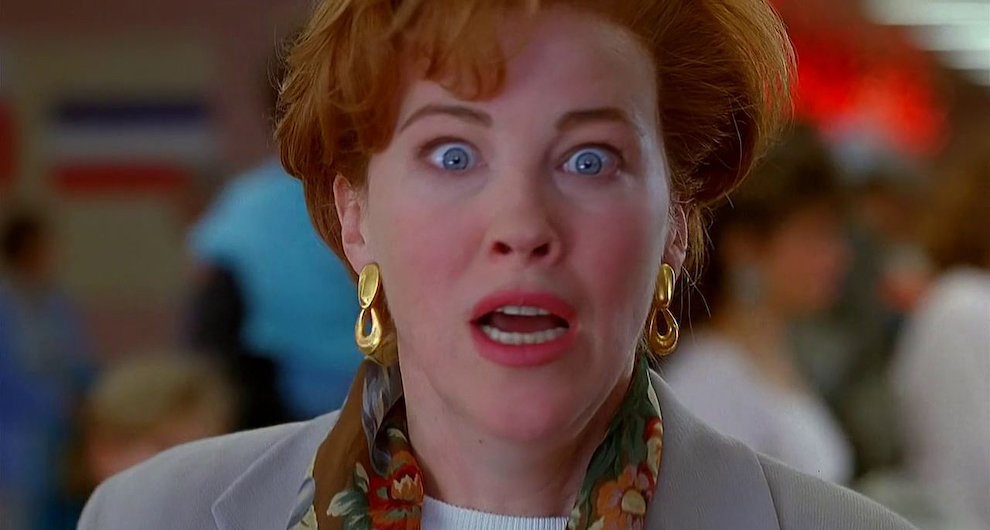 While trying to replace the batteries in his Talkboy, Kevin takes to new heights after he accidentally boards the wrong plane in Home Alone 2.

Meanwhile, the other members of Kevin’s family make it onto the correct American Airlines aircraft, which is taking them on a direct flight from snow-covered Chicago to tropical Miami in their attempt to switch out Christmas trees for palm trees.

This booking includes 10 coach tickets and four first-class seats for the adults, which in total is estimated to have cost around $9,927 at the time but, once again, Kevin’s seat is left vacant as he finds himself on an accidental vacation of his own in the Big Apple.

So we should probably factor in some extra emotional baggage… 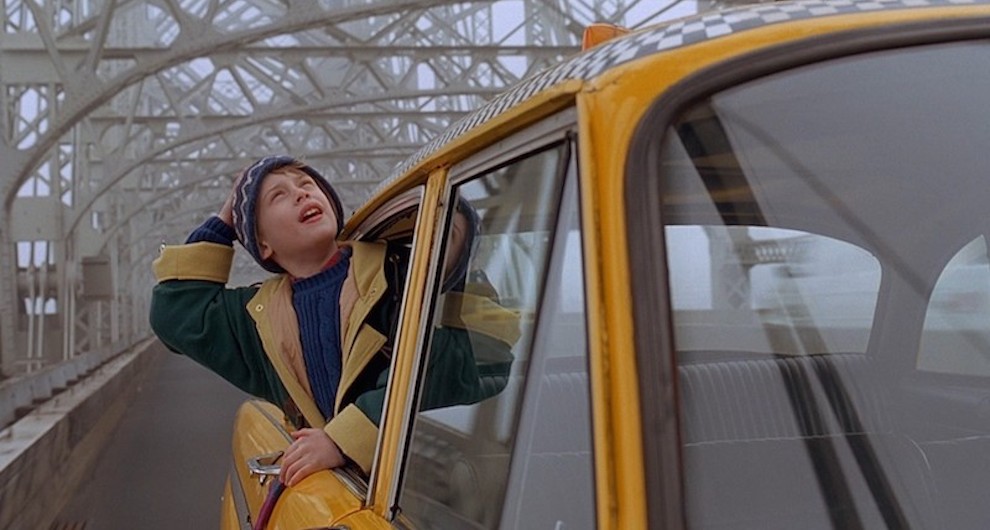 Some might say that hailing a cab in New York is a rite of passage, especially for certain young travelers who may find themselves lost in the big city.

Yet somehow street-smart Kevin seems to take everything in small strides, from finding out whether the American Dental Association approves his toothbrush to riding in style and taking in the sights during a solo tour of the city, he clearly has no problem fending for himself.

With his father’s cash and credit cards he is able to turn NYC into his very own playground, but first he has to get into midtown Manhattan. This approximate 16-mile cab ride to Radio City would have cost $25 plus tolls and tax in the early ’90s. Today the same trip would more likely start at $55. 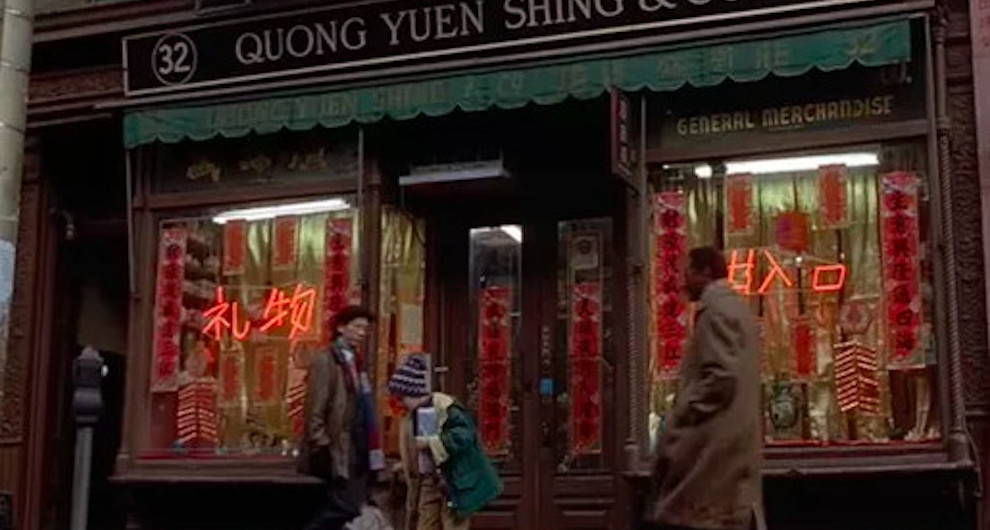 On his journey into the city, Kevin detours to make a quick pit stop in Chinatown, where he purchases two packs of Roman Candles.

Selecting this as his weapon of choice, Kevin picks up two lots of the traditional fireworks at around $10 per pack, which he later uses in his quest to bang-up the bandits.

The money he spends literally goes up in smoke when he lights them up and launches all 12 fireworks in Central Park. The police officers, guided by the bright and colorful display, arrive to arrest the bad guys before they have time to attempt an escape.

No one can deny that Kevin is a bright spark! 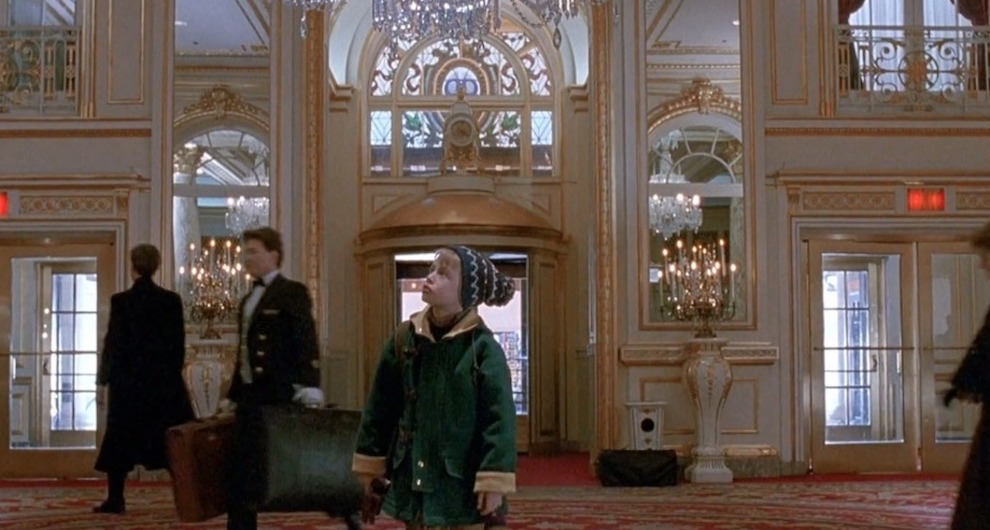 Kevin is a kid that certainly knows what he wants, so it’s perhaps no surprise that he has very specific room requirements for his overnight stay in the city.

Having recorded a commercial for the world-renowned Plaza Hotel, described as “New York’s most exciting hotel experience”, conniving Kevin manages to convince the reservation team to rent him a room, using the Talkboy to modulate his voice to sound deeper.

He requests one of the “finest suites”; complete with an extra large bed, a TV, and one of those little refrigerators you have to open with a key. A one-night stay in a multi-room suite would cost around $1,100 at the time of booking (taxes and rentals not included). 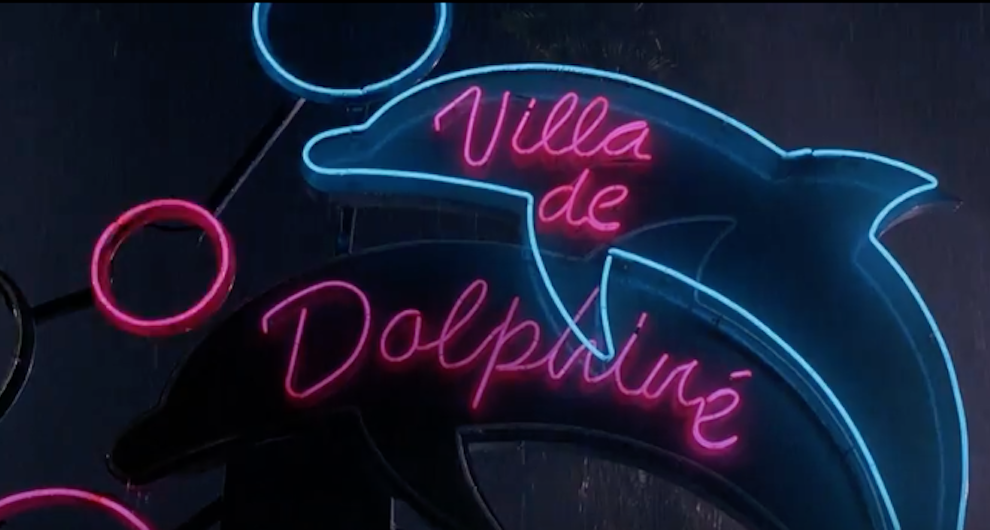 While Kevin is anticipating the moves of Harry and Marv, who are now dubbed The Sticky Bandits, the rest of his family touch down in the sunshine state.

However, the McCallisters soon discover that they will be having a blue, blue Christmas without Kevin. As they pull up to the run-down Villa de Dolphine in Miami, looking out of their rain-soaked car windows in total disbelief, Uncle Frank exclaims, “it didn’t look this bad on our honeymoon!”

While the Dolphine doesn’t exist in real-life, a motel of equal standards can cost up to $99 a night during peak season. Given the number of guests in the party, the family would probably need space for additional beds in their rental room, which could potentially increase the cost to as much as $693.

And if you think that bites, then you better watch out for the bed bugs.

When Kevin steps foot inside Duncan’s Toy Chest, he can hear the sound of till bells ringing, but not so many sleigh bells.

Even so, he purchases a can of Monster Sap, which is a fun-looking soap that shoots sap straight out of the nose of the grotesque monster. His purchase is $23.75 altogether, but it would probably set someone back by $40.86 today.

After collecting his goods, he makes a further donation of $20 to St. Anne’s Hospital for Children, rather than spending it on stuff that will rot his teeth and his mind. Mr. Duncan kindly awards Kevin’s generosity by allowing him to select an item from the store’s Christmas tree. He chooses the Turtle Doves and later gives one-half of the ornament to the Pigeon Lady as a sign of eternal friendship.

It really is the gift that keeps on giving. 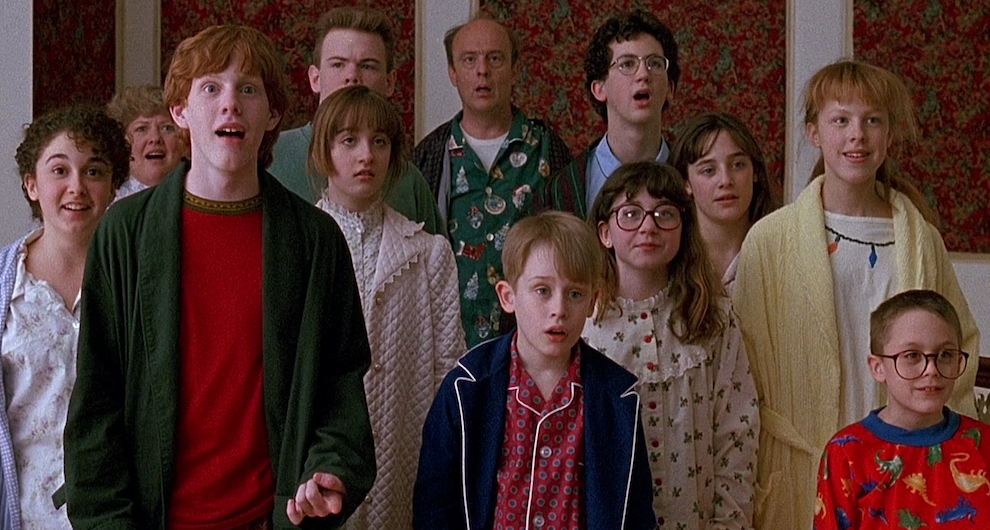 Once the McCallister family track down Kevin’s whereabouts, they pack their bags and relocate to New York in time for Christmas Eve (it turns out they didn’t like the palm trees, either).

Without losing any members of the family along the way, the group successfully find themselves on the busy sidewalks of the city in no time, as Kate frantically searches for her son. This one-way flight would have come out at around $1,872.

However, once the entire family are finally reunited, they have to focus on getting home… and not alone. This would require a further flight from New York to Chicago some time after Christmas, which would probably set them back another $3,150 or thereabouts. 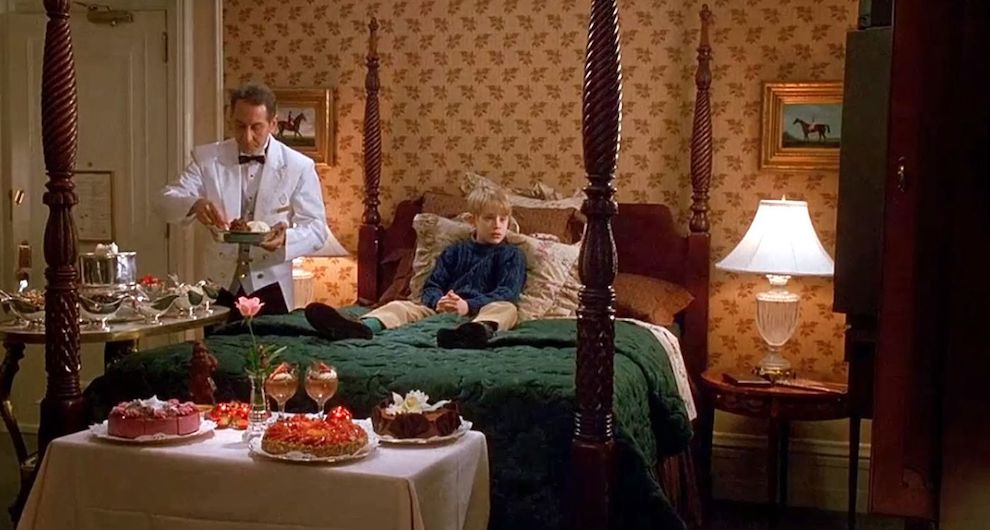 When all is said and done, Kevin had the trip of a lifetime, minus a few sticky situations.

At the end of the movie, while his family tear into Christmas presents, Kevin sneaks out to visit the Pigeon Lady. During this time, big brother Buzz rats Kevin out for spending $967.43 on room service, which causes his father to freak out.

The bill includes extravagant ice cream sundaes (with three scoops because he wasn’t driving), movie rentals (since he’s ten years old and TV is his life), and a plethora of other goodies, so it is hardly surprising. Today, however, the same bill might cost in the region of $1,659.33.

That’s quite an expensive Christmas gift!

Based on our estimations, the grand total for Kevin’s misadventures would have approximately come to $55,000 for Peter McCallister. This isn’t including other potential outlays, such as the two-dozen cans of paint that Kevin borrows from Uncle Rob’s renovation and the replacement of Mr. Duncan’s toy store window, which Kevin smashes to catch Harry and Marv in the act.

Over the years, there have been endless conspiracies about Peter McCallister’s career but what do you think his job might have been? Let Your Geek Sideshow and share your suggestions in the comments!