The tides are changing for DC films. Joker, initially viewed with skepticism, has become a cultural juggernaut after breaking Deadpool’s record for highest-grossing rated R film and then beating out Marvel’s own Avengers: Endgame as the most profitable comic book movie. It looks like DC has no desire of stopping either.

In a few months, fans will get to see the highly anticipated Birds of Prey (And the Fantabulous Emancipation of One Harley Quinn) and in 2021, Matt Reeves’ The Batman will hit theaters. It’s this rendition of the famed Caped Crusader that DC fans are most excited for.

The DCEU seems to have perfected darker toned superhero flicks with realistic themes. Matt Reeves’ hard boiled detective story is thus in capable and trusted hands. Keep reading to find out everything we know about The Batman so far.

Like all Batman movies, this one is surrounded by anticipation and speculation, namely about plotting and casting. What is definitely known, however, is its release date. To see if this film is going to win over the hearts of diehard DC moviegoers, we have to wait until June 25, 2021.

One of the first ways fans can judge a film’s quality is by taking a look at casting. For this 2021 Batman movie, it looks like Matt Reeves has hit the ground running. It’s not often directors get so much right so soon but it really does look like perfect casting thus far.

Robert Pattinson will helm the film as the latest the Dark Knight. The Twilight star has proven himself to be an acting force to be reckoned with and, let’s not forget, has worked with Christopher Nolan, who many argue produced the best Batman film. Zoë Kravitz will saunter beside Pattinson as the latest too-cool-for-you Catwoman. Kravitz is known as a stylish girl on and off set so she should have no problem getting into character as the unattainable Selina Kyle. She’s famously starred in Little Big Lies and Fantastic Beasts 2: The Crimes of Grindelwald.

The Batman will also feature fan-favorite villain The Riddler. Who better to play an obsessed and emotionally complex character than Paul Dano? He has played similar characters in Prisoners and Escape at Dannemora.

Jeffrey Wright is also confirmed as Commissioner Gordon. He has big shoes to fill after Gary Oldman’s take on Batman’s ally and with Westworld under his belt, fans can rest assured Wright will do the job well.

There has also been speculation at the latest actor to join the cast. Jayme Lawson, a recent graduate from Juilliard, has been confirmed but there’s no official word on her role other than that her name is “Bella” and she is part of a grassroots political movement in Gotham. Many have already begun to speculate she will actually play Commissioner Gordon’s daughter, Batgirl herself.

In recent days, there has been a lot of speculation on three impressive actors in the works of joining the cast; Colin Farell, Andy Serkis, and Matthew McConaughey.

So far, the former two are looking to be high contenders for classic Batman roles. Serkis is in talks to play Bruce Wayne’s right-hand man and butler, Alfred Pennyworth, and Farell could be the next Penguin.

Someone who has been rumored to appear, too, but not as confirmed is Matthew McConaughey. Rumor has it the Oscar winner would play District Attorney Harvey Dent—also known as Two-Face. 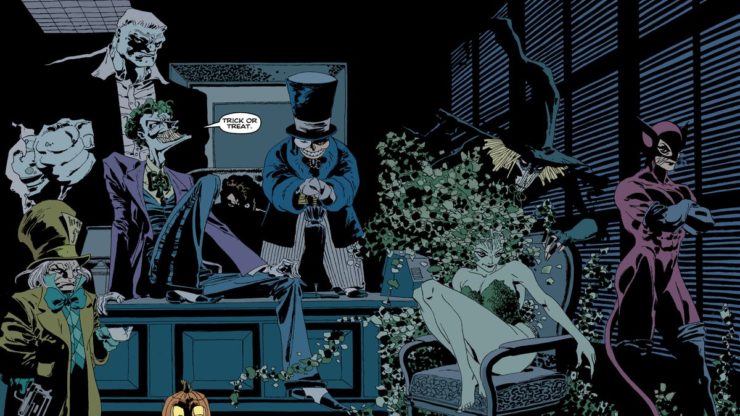 2021’s The Batman is shaping up to be a gigantic summer blockbuster with its stellar cast and trusted director. So, what will the plot be with such an exciting team?

Matt Reeves has said The Batman will not be an origin story. Instead, he describes his film as “noir-driven” and one where audiences can finally see the greatest detective use his deductive reasoning.

Many have pointed out the obvious similarity of villains to those in the comic The Long Halloween. In the 13-issue series, Batman must hurry to find out who is responsible for multiple holiday murders with help from both James Gordon and Harvey Dent. Many famous DC villains are at play, including the Riddler, and the comic features the birth of Two-Face.

Nothing is confirmed yet but fans are feeling pretty confident about The Long Halloween being source material for the film.

How Will It Fit into the DCEU?

The jury is still out on this one. We do know the film will be a three-part series with Pattinson signed on for each installment. Will it tie into Wonder Woman, Aquaman, or better yet, Joker? We will have to wait to see how it all plays out on June 25, 2021.

So, what are your thoughts on DC’s upcoming The Batman film? Let Your Geek Sideshow and let us know in the comments!