Darth Vader. Lord Voldemort. Sauron. Everyone loves to hate these villains. We enjoy rooting against them or, in some rare cases, in their favor. The most iconic villains of fiction represent a darkness that we’re all attracted to, and they play an important role in our understanding of the world. Whether the myth is ancient or modern, the villain is just as important as the hero. Without both, you don’t have a story.

Perhaps most would agree that Vader is the ultimate bad guy — dark, complex, powerful. But there’s another villain, this one from Star Trek, that is all these things and more, and he doesn’t get talked about nearly enough. There’s a case to be made for calling him the “greatest” villain in science fiction.

Meet Gul Dukat: Butcher of Bajor, Servant to the Pah-wraiths, Foil to Sisko. Portrayed expertly by Marc Alaimo, this character appeared in all seven seasons of Star Trek: Deep Space Nine as the primary antagonist. A member of the ruthless Cardassian race, he was a high-ranking military leader in charge of the planet Bajor, a peaceful world that had been conquered and ruled by the Cardassian army for over 50 years. 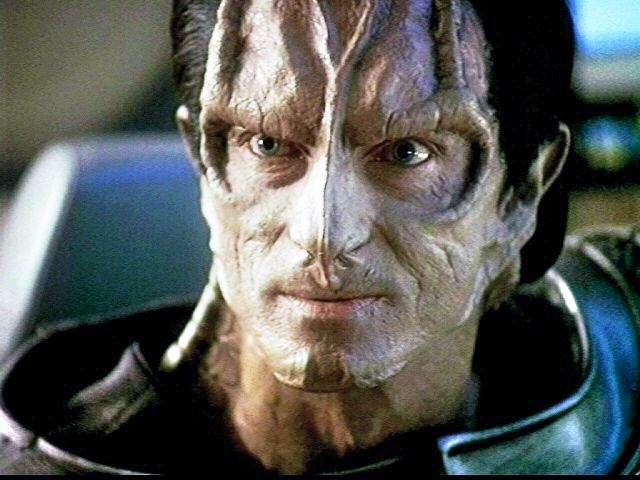 Much like other Cardassians, Dukat came to be known for his brutality towards Bajorans, who clung to their religious beliefs in the Prophets to save them. He ordered mass executions and violent interrogations, and he also harassed and abused many Bajoran women. In his own mind, he was charming but any flattery he got was actually the result of fear.

Even more interesting is the fact that he actually did have a germ of good within him. He could show compassion, and his words could be soothing and eloquent. Sometimes, he even seemed remorseful, but he just couldn’t help justifying his sins. In his view, the Bajorans were inferior beings who needed his leadership. He actually called them his children.

A Change of Heart? 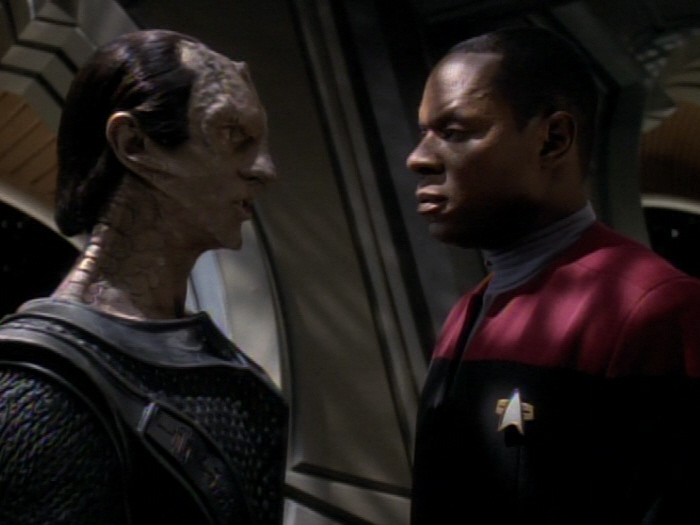 There was a period in the series when Dukat could have changed his ways — when his love of family, his attempts at friendship, and his apparent guilt could have led him down the path to redemption. That didn’t happen. Instead, he was swallowed up in selfishness and utter hatred, and it ended up being one of the most absolute corruptions ever seen in sci-fi television.

It all started when the Bajorans regained their independence. Using scattered bands of resistance cells, they drove the Cardassians off. This was a massive embarrassment to the Cardassian Central Command, not the least to Gul Dukat.

Something then happened that injured his pride even more. The Bajorans had long believed that a messiah, the Emissary, would connect them with the Prophets. They were surprised when this icon turned out to be a Starfleet Commander named Benjamin Sisko. He was assigned to Deep Space Nine, a former Cardassian space station owned by Bajor and jointly managed with the Federation.

Sisko’s discovery of a wormhole (the home of the Prophets) meant that he was their Emissary. The former commander of DS9, Gul Dukat, was jealous that Sisko was held in such high spiritual regard by the Bajorans. For all his evil, Dukat wanted that kind of appreciation — which is to say, worship — more than anything else. Sisko accomplished everything Dukat wanted in the way of earning Bajor’s respect, and he did it without even trying. 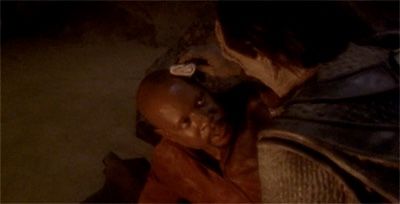 Dukat’s relationship with Sisko was one of the most interesting things about the show. Though they were enemies, it was obvious that Dukat had great respect for Bajor’s new Emissary. He even seemed to want Ben’s friendship. They worked together on several missions, as Cardassia used Dukat to maintain a relationship with the Federation and even with the Bajorans. A few times, they saved each other’s lives.

If he had chosen to truly pursue friendship and act honorably, that would have been the quickest route to redemption for Dukat. In the long run, however, Dukat’s jealousy and desire for power overcame all his righteous inclinations.

Any chance of friendship soured for good when the Cardassians, plagued by attacks from the Maquis and the Klingons, allied themselves with a ruthless coalition from the Gamma Quadrant known as the Dominion. One of the galaxy’s costliest wars had begun, and Dukat and his species had chosen the evil side. They were a broken people, and the Dominion’s promise of galactic glory resonated deeply, especially with Dukat.

Dukat and his Dominion allies eventually took control of DS9, maintaining an uneasy relationship with the Bajorans on board. With the Federation gone, Dukat promised that this occupation would be different. He didn’t even see it as an occupation, and he truly did let the Bajorans have free reign in most instances. 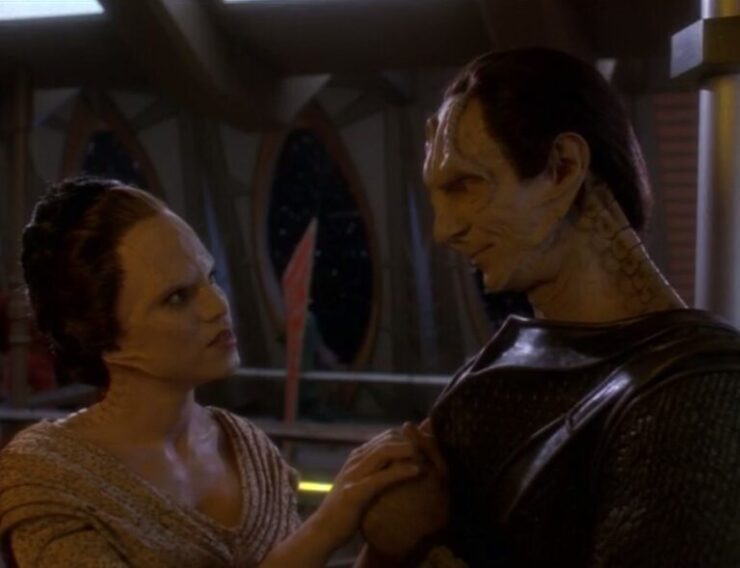 Also aboard the station was Dukat’s half Bajoran daughter, Ziyal. Though Dukat had initially wanted to kill her to keep her secret from his Cardassian family, they soon forged a powerful relationship. Before his success with the Dominion and DS9, he had given up his marriage and his status by sparing her life.

Sisko and Starfleet eventually retook the station, and Ziyal was killed by Dukat’s friend for siding with the enemy. Dukat loved his daughter deeply, and her death left him a weak shell of a man who was easily imprisoned by the Federation. Despite being an evil despot, nothing was more important to him than his loved ones — nothing but himself, anyway.

The man who lost it all spent the next few months crying himself to sleep, receiving compassionate therapy from Starfleet doctors, and slowly losing his sanity. When Dukat was being moved to another location, a Dominion attack forced the ship to crash on an inhospitable planet. Sisko — now a Captain — was stranded with Dukat, and it was here that we explicitly saw the Cardassian’s capacity for evil.

Down the Path of Evil 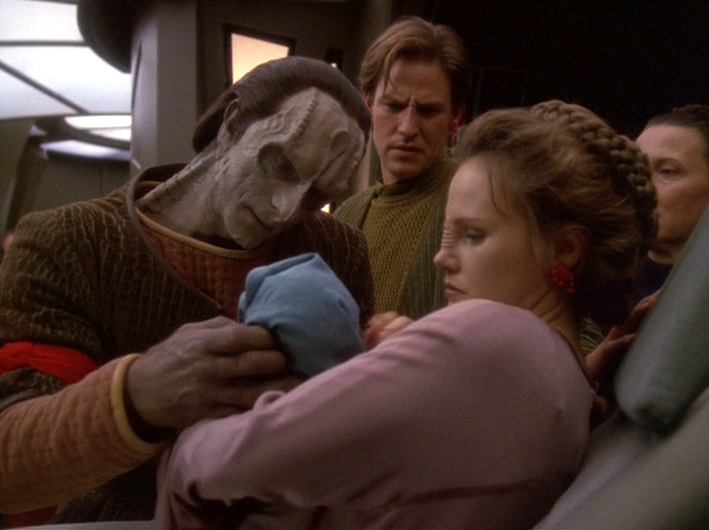 After feigning friendship, an insane Dukat beat Sisko mercilessly. Even after this, he still tried to rationalize his violent history by stating that Sisko (and the Bajoran people) deserved the pain he caused them. The villain then escaped in the crashed shuttle, inexplicably sparing Sisko. The Captain later recounted that Dukat wasn’t a shade of gray — he was pure evil.

That evil led Dukat to begin worshipping the Pah-wraiths, the demonic anti-Prophets. After being briefly possessed by one of them, he started his own cult of Bajorans who were disillusioned with the Prophets, another example of his manipulation. All Bajorans hated him for his tyranny, but his faith in the Pah-wraiths had won this group over. What was truly terrifying is that this wasn’t some scheme — he honestly loved the wraiths, hatred incarnate. 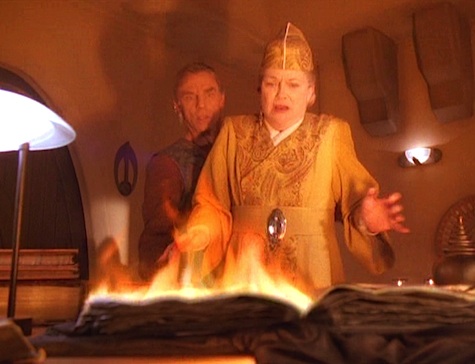 This led to Dukat nearly destroying Bajor by manipulating their spiritual leader, Kai Winn, into releasing the rest of the wraiths from the Fire Caves. He disguised himself as a Bajoran and, in true Dukat fashion, seduced her romantically. Winn, the leader of Bajor’s soul, shared a bed with the ultimate destroyer of her people.

Winn’s desire for glory led her to be easily corrupted. She was a lot like Dukat, filled with a lust for power, though her aspirations were mostly political. But Winn had a trick up her sleeve. She poisoned Dukat, making him a sacrifice for the Pah-wraiths. Unfortunately for her, this simply led to Dukat being fully possessed by the evil beings. One of Cardassia’s greatest sons was now utterly beyond redemption. 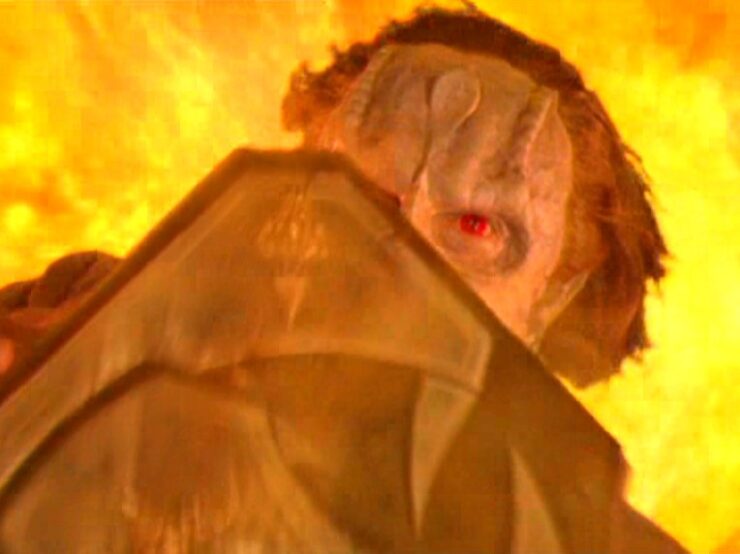 After the Federation finally beat the Dominion, Sisko arrived at the Fire Caves to stop Dukat. Following a short struggle, the possessed Cardassian was thrown into the fire with the Pah-Wraiths for eternity. He had gambled on his greatest vices — seduction, manipulation, cruelty, power — and had finally lost his soul forever. One can’t help but wonder, though, if he’s still alive with the Pah-wraiths, waiting for someone to set him free and unleash him upon the galaxy.

Those who have watched DS9 know that Dukat is one of the most impressive villains in science fiction, and certainly one of the most entertaining. His complex mix of love and hatred, his overwhelming desire for strength, his charismatic mannerisms, and his crushed soul make him a character worth thinking about. His story is a well-constructed tale of the capacity for evil.

Though he’s a Cardassian, he really tells us more about our own nature. Dukat’s character shows the ultimate result of our selfishness and anger. Like Darth Vader, he is a study in corruption and possible redemption through love and family. But unlike the dark Skywalker, Dukat denied salvation to the bitter end. He just couldn’t let go of himself.

We all would rightfully hate someone like that in real life. Even so, there’s no denying that Gul Dukat exudes a powerful magnetism that pulls us in and doesn’t let go. Like a car crash, it’s impossible to look away.

What are your thoughts on Gul Dukat as a villain? Let us know in the comments, and don’t forget to Let Your Geek Sideshow!