As Fashion Week runs its course, it’s time to look back at a recent event in X-Men history that will forever hold a place in fashion fans’ hearts: The Hellfire Gala. Last June, this comics spectacle spanned a dozen issues and approximately 9 separate teams. It was a high-profile event like none other in X-Men history (unless you count the first Hellfire Gala in 1987 that started it all).

Organized by the brilliant Emma Frost, with fabulous designs by House Carnation, this sartorial spectacular brought together the mutants of Marvel comics to celebrate the nation of Krakoa — all while looking their absolute best. With promises of another gala on the horizon, let’s look back at some of the most eXquisite outfits from the Hellfire Gala of 2021.

Factors to be considered are color schemes, materials, how well does the outfit reflect the mutant, as well as their powers and storylines, and how the outfit relates to their everyday attire. The scale we’ll be using is an X of approval or a NeXt of … well, maybe neXt time. 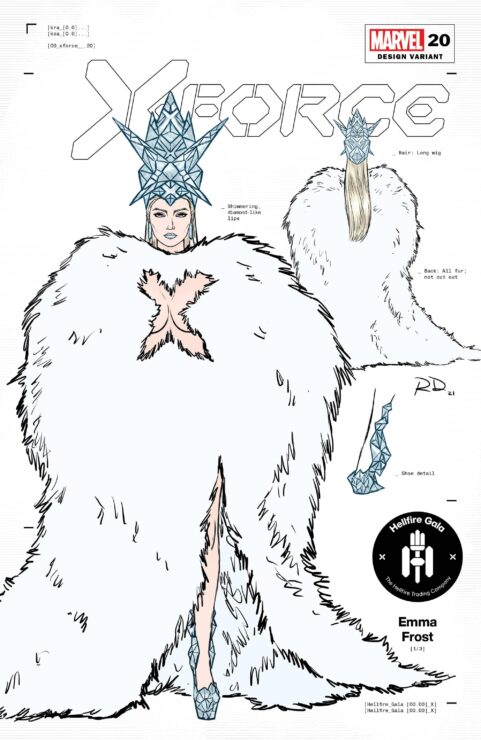 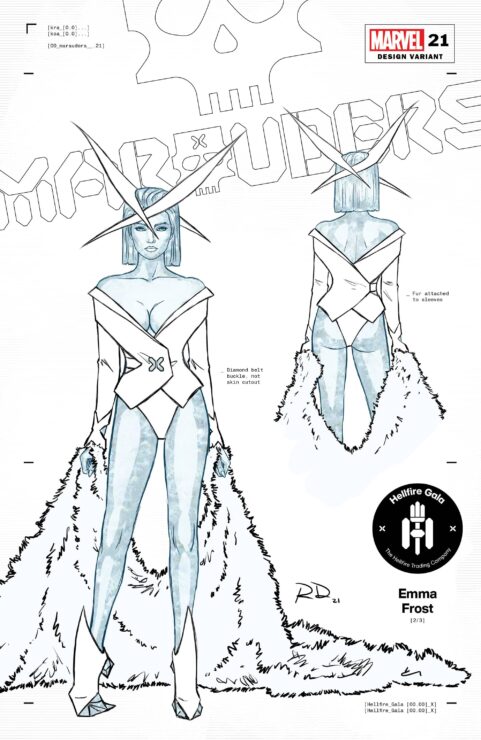 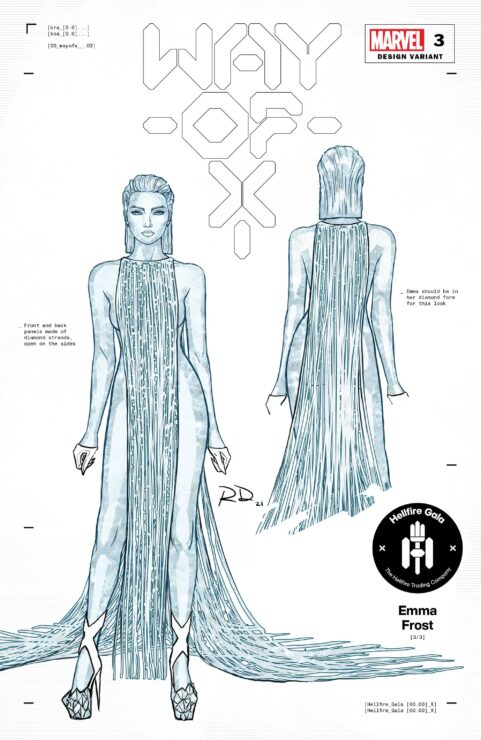 All three of the Hellfire hostess’ looks are simply smashing. From the eXtravagant headpieces to the trailing trains, Emma knows how to turn heads. Her slicked back hair in both diamond form outfits add a sleek, modern touch to the luxury of her dresses and coat. 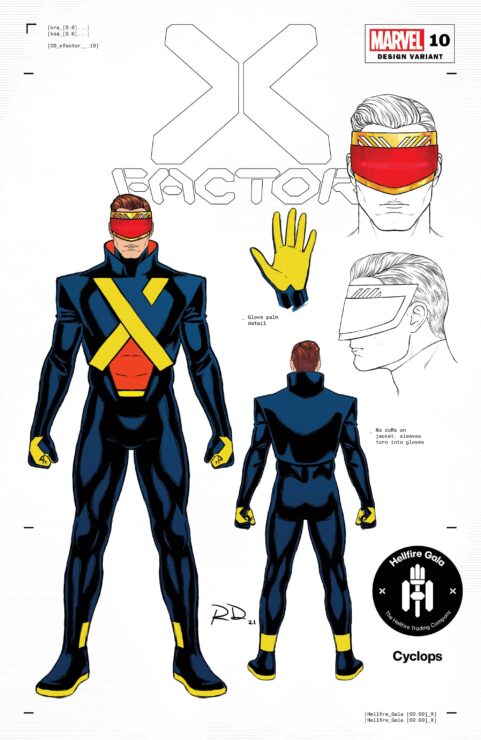 The first NeXt is for Scott Summers, only because it’s so similar to his regular battle outfit. Sure, there’s a futuristic feel with the sharp shoulder pads and updated visor. But the upturned collar reminds us that Cyclops will always be that uptight preppy dude. 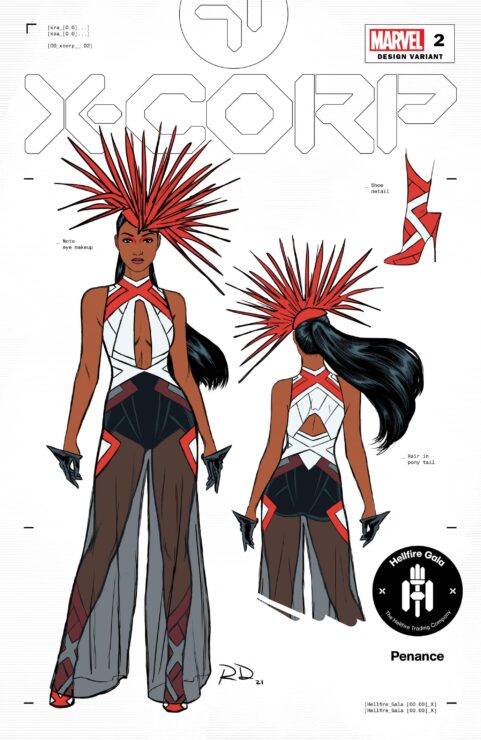 As the head of X-Corp (alongside Angel), Monet St. Croix serves executive realness with this Hellfire outfit. Rather than a dress, she gets down to business in a pantsuit that has distinctive cut outs and sheer legs, not to mention a headpiece that connects Monet’s look to her Penance form. 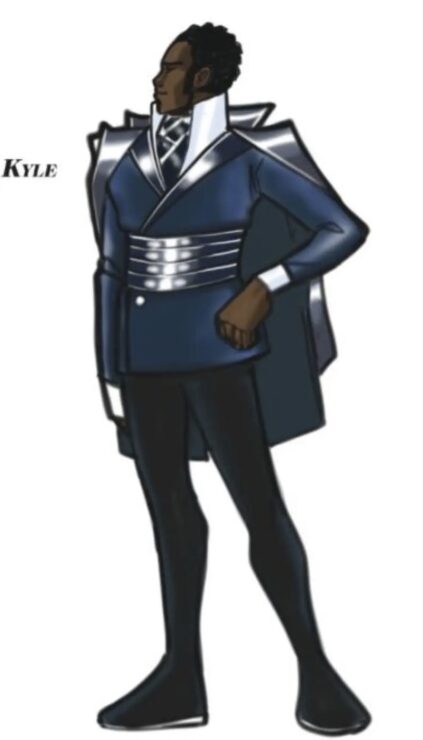 Separately, Marvel’s first officially wedded gay couple would look perfectly fine. Both of their outfits are exceedingly dapper. However, considering their importance together as husbands, and that Kyle is the only human allowed to reside on Krakoa, their outfits could have been more closely synched to highlight their deep devotion to each other. 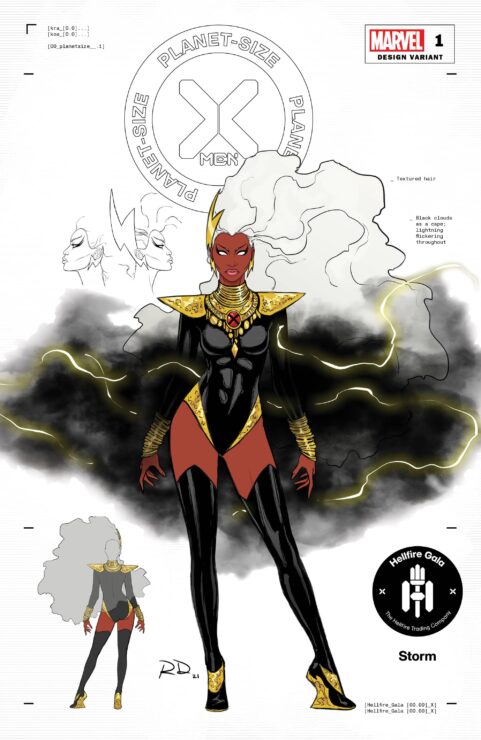 Big hair, thick platforms, and plenty of gold accessories — Storm’s Hellfire look is absolutely worthy of an Omega-level mutant. In one of the most impressive unions of style and superpower, her cape is a storm cloud that crackles with lightning. Nobody’s going to rain on Storm’s parade unless she says so. 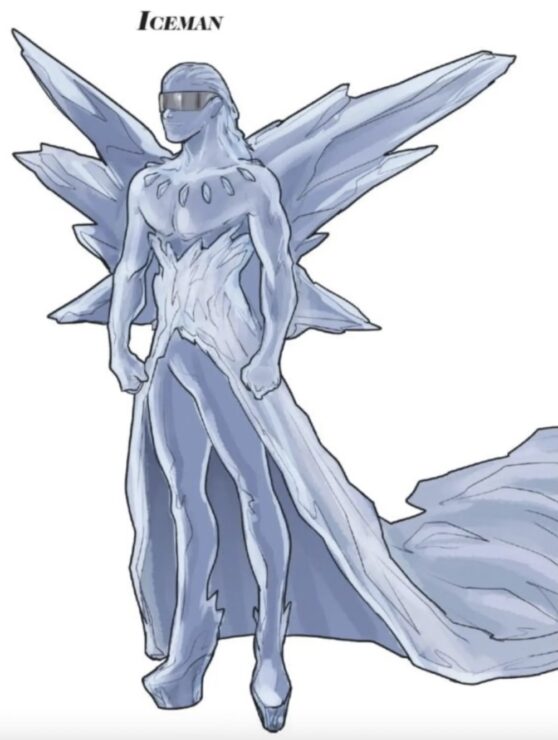 Bobby’s Hellfire look is a NeXt because, when compared to his usual sleek ice form, this design feels rough around the edges — almost similar to his original snowman form in the ’60s. The long train, heels, and emblems across a bare chest are great choices but then his sunglasses don’t even seem to be ice. Overall, it feels incongruous to the normally stunning look of Iceman. 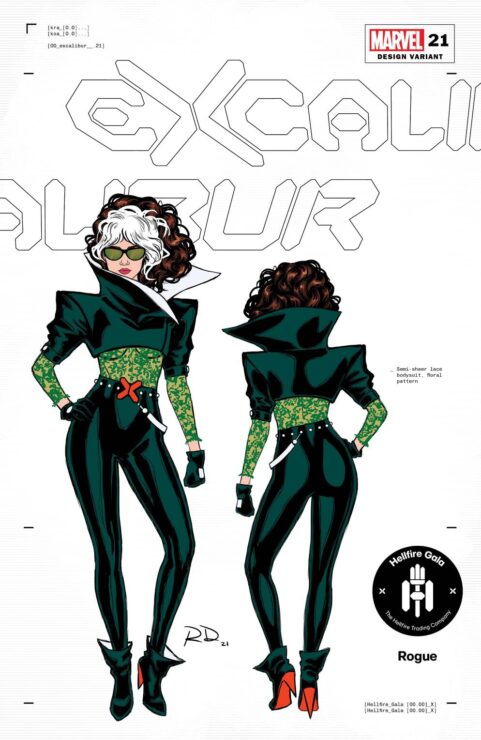 Rogue has always been a woman of high-flying fashions, starting with her off-the-shoulder hoodie situation up to her iconic brown leather mini-jacket. Her Hellfire ensemble combines some of her debut style, with the green and white color scheme, and puts a collared-couture spin on her obligatory jacket. All in all, Rogue looks like she stepped off the set of an ’80s glam rock music video in the best way. 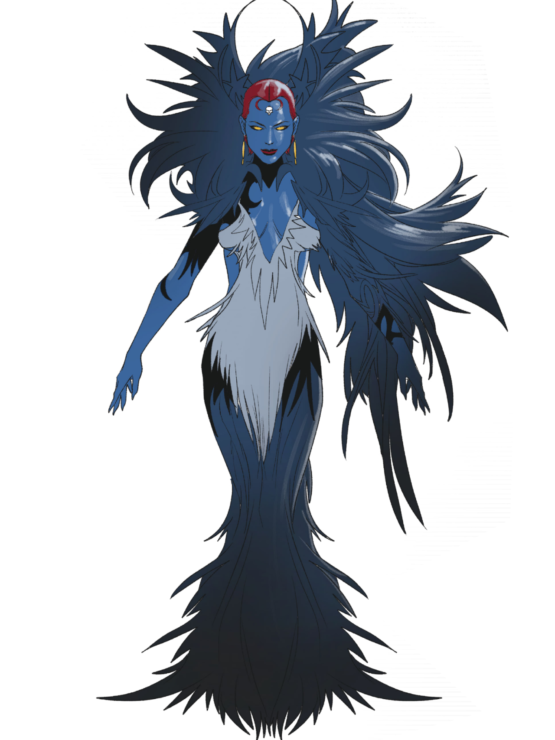 It makes sense that Mystique’s outfit would be over the top because while she may stick to the shadows, there’s nothing understated about this unhinged assassin. However, there seems to be a missed opportunity to pay homage to her wife, Destiny, who Mystique has spent literal lifetimes trying to bring back. In addition, there might have been a more bold use of her blue and white color scheme, or even a complete departure to signify Mystique’s shifting position in Krakoa’s Quiet Council. 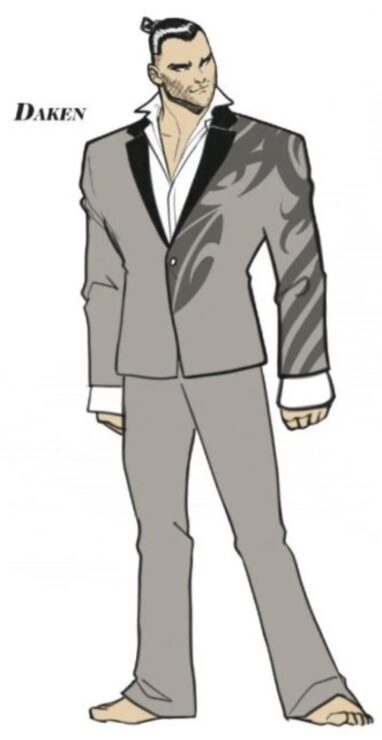 Daken’s Hellfire tan suit is classic, with the black lapel and neat tailoring, yet also playful with the swirling shoulder pattern. Likewise, his tidy topknot and unbuttoned shirt provide pleasing contrasts for each other. And of course, his unshaven face and lack of shoes add that signature feral quality that we love about Wolverine’s family. 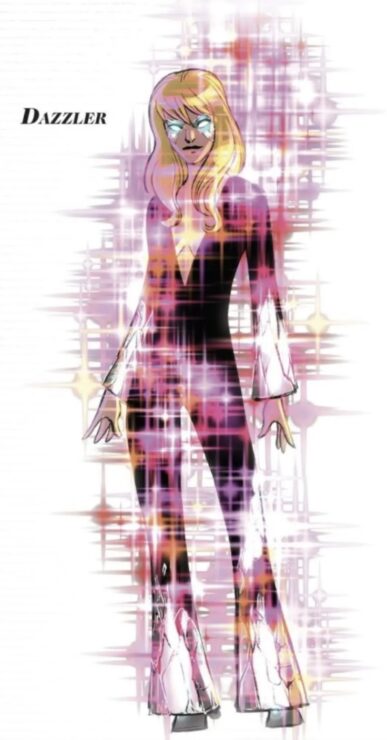 Disco isn’t dead! Dazzler’s light-sound converting powers are used so well here, functioning as a shimmering aura all around her. However, beneath the glitter, her outfit itself is bland for such an enthralling woman. It feels like she could have leaned more heavily into the Studio 54 theme, with even a bit of Lady Gaga absurdism to modernize the look. 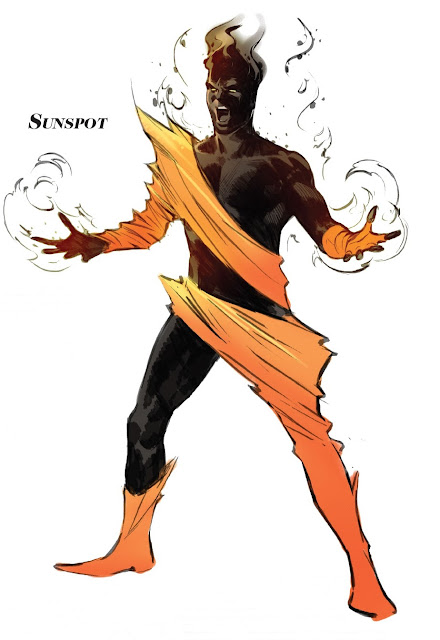 Roberto Da Costa has always had one of the most intriguing physical transformations when he uses his powers, and similar to Storm, his Hellfire outfit artfully combines form and function. His rich orange and yellow garments blend into his solar-powered form in a visually pleasing asymmetric swath of flames. 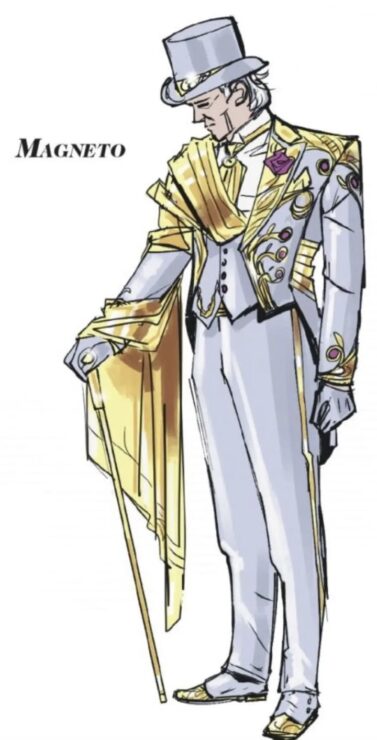 Step right up, step right up, welcome to the most magnetic show on Earth (and Mars)! While Magneto has never shied away from a flowing cape and the regal adornment of a super-villain, this outfit feels more like an emcee at a carnival than a guiding force of a global superpower. It does match with Charles Xavier’s outfit but … that’s a whole other headache.

Synch’s power-replication abilities are quickly proving to be a valuable addition to Krakoa, especially since he was named a new member of the official X-Men! Likewise, his Hellfire outfit showcases his powers in a visually ingenious way, with the iridescent, holographic cape reflecting the way he mirrors his teammates. 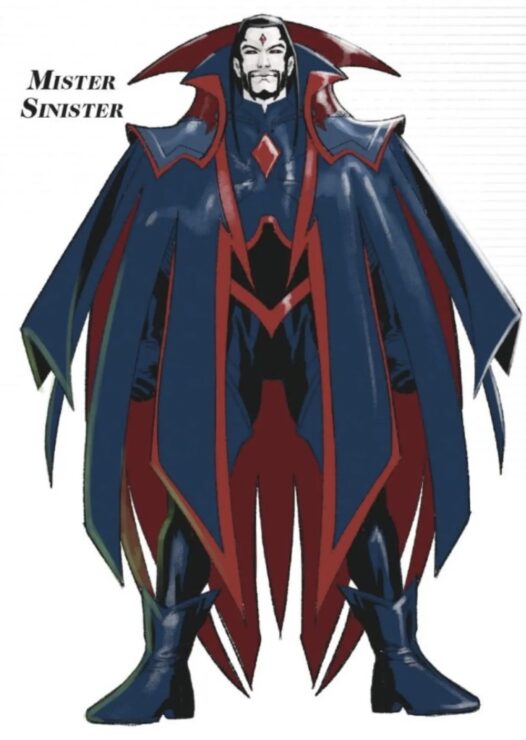 Mister Sinister is always the wise-cracking, fabulously devious member of the Quiet Council. His quips and asides, not to mention his network of gossip, reflect his, well … sinister nature. Which is why this look, which is so similar to his regular outfit yet somehow more understated, seems like it’s missing a chunk of his personality. 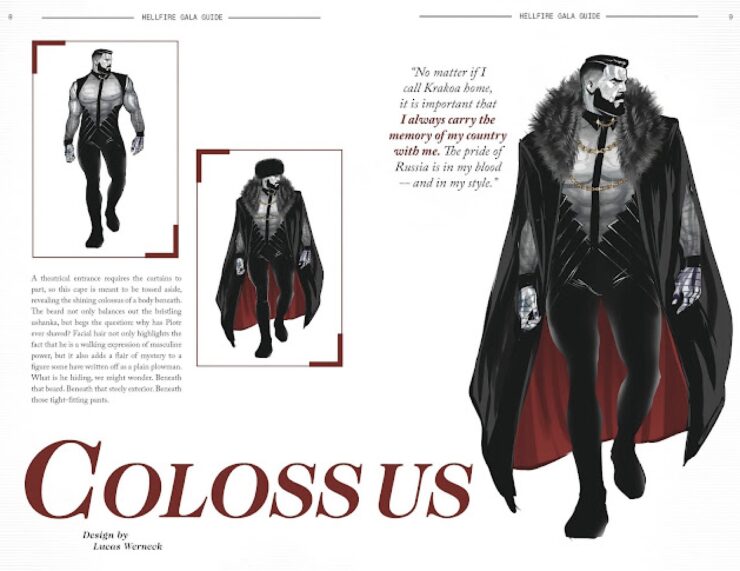 Colossus‘ outfit is a win because it goes against what his usual clothing does, which is show off his rippling steel exterior. Of course, there’s still a flash of chiseled chest, but instead his Hellfire look connects him with his homeland, Russia, and gives him an air of authority with a cape — something Piotr has never really worn before. 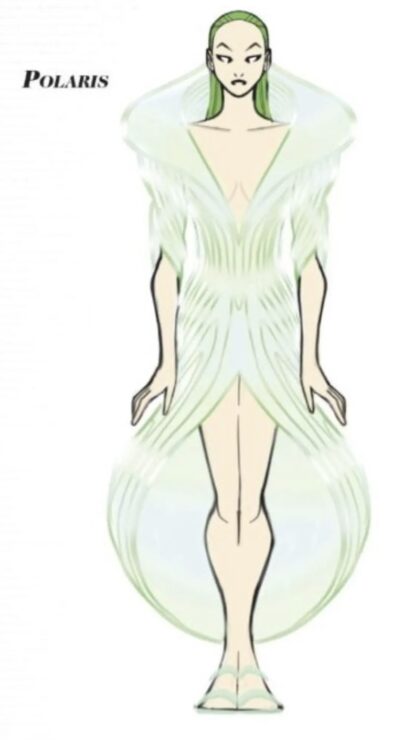 Polaris is another sartorial success because her fashion is such a bold, but carefully constructed, departure. Instead of her signature hairstyle, thick waves of bright green hair, everything is slicked back. The focus then shifts to her dress’ silhouette, which poetically evokes the undulating ribbons of her electromagnetic waves. 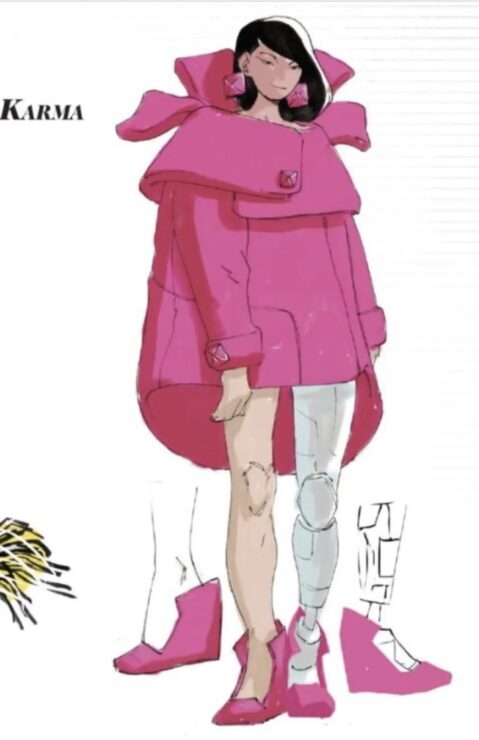 Karma’s story in the Hellfire saga, in which she struggles (but ultimately succeeds) in asking Galura to dance, is one of the most heartwarming episodes of the event. Her outfit, on the other hand, feels like it’s on the way to Club Kid chic but never quite arrived. Plus, Karma’s pink visual power signature is so instantly recognizable, and her look is clearly referencing that, but it could have been even more geometric and fragmented to really make that connection. 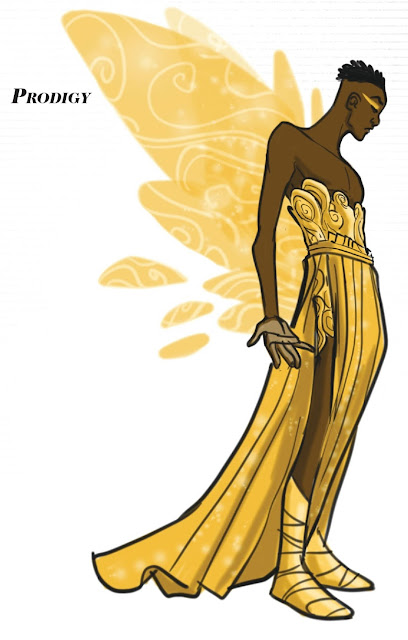 Prodigy’s story was another extremely satisfying segment of the Hellfire Gala because he takes down a despicable man and empowers himself — all the while looking absolutely stunning. The lines of his eyeshadow are clean and perfectly set, while his shimmering wings and golden gown couldn’t be more alluring. X-Factor is lucky to have him and Eye-Boy to help crack the incoming cases! 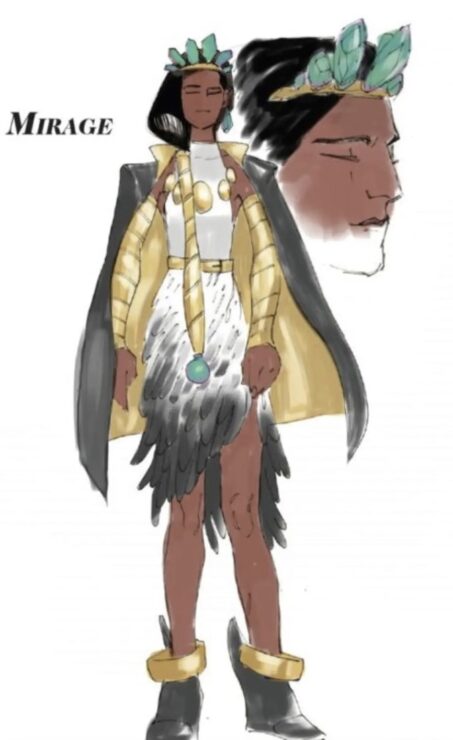 Dani Moonstar’s outfit is another seamless example of combining a character’s core values with captivating fashion. As Mirage, Dani joined the New Mutants and bravely defied Xavier by demanding that her team outfit incorporate aspects of the Cheyenne Nation. As an adult, Dani still stays true to her Native heritage as well as bringing in nods to her time as Valkyrie. 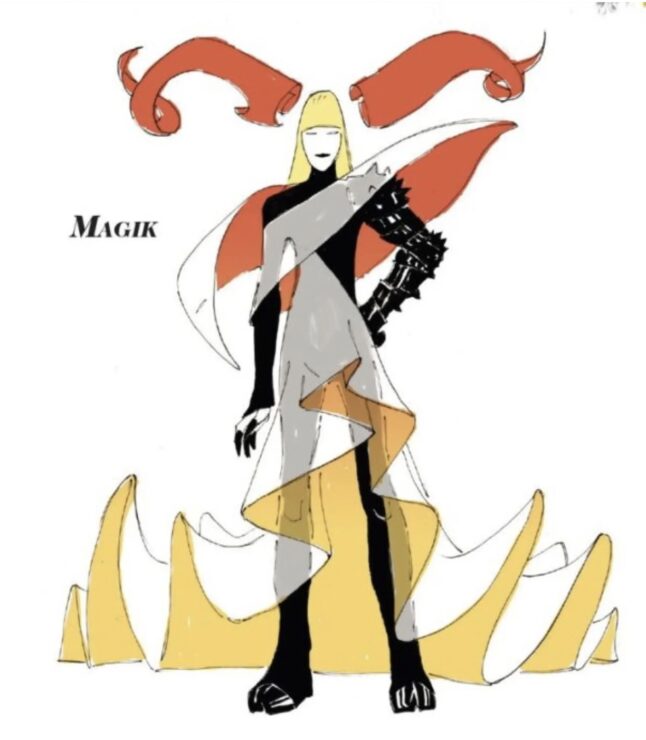 With all of Magik’s history in Limbo, as well as her proven leadership in battle, her Hellfire look falls just a bit short of such a formidable character. The color choices are spot on — black and white to complement her hair and armor, as well as a fiery gradient like the flames of Limbo. But still, the look feels divided rather than cohesive. 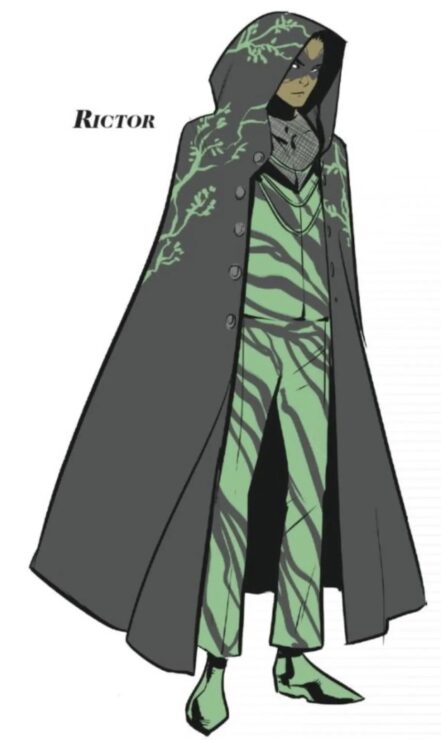 Rictor’s personality puts him into the role of outsider more often than not, and the relative obscurity of his outfit’s cloak perfectly captures this side of him. Another winning aspect of his Hellfire outfit is the rebellious zigzags of deep green, which hint at both his ancient connection to the earth as well as the fractured nature of his identity. 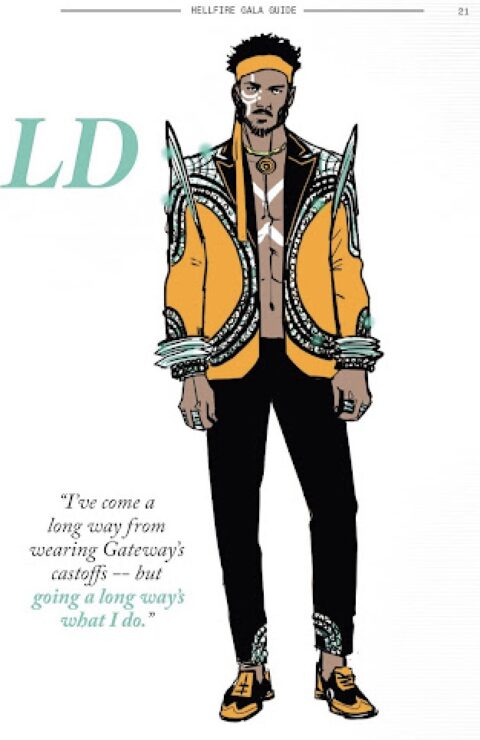 Initially a member of the Secret Warriors and most recently involved with S.W.O.R.D., Manifold is an Indigenous Australian mutant. His Hellfire outfit expertly combines the bold Dreamtime-inspired colors and patterns of his heritage with a sleek base that evokes the velvety blackness of space.

Over the decades, the X-Men have become just as well known for their awe-inspiring powers as their iconic outfits. From the vibrant blue and yellow of the original lineup to the boldly individualized costumes of the ’90s, the X-Men always put their best look forward. Of course, not everyone could be included in this list of Krakoan fashion, but all the mutants certainly did their best — well, except for Fenris. They’re the worst.

Which of the Hellfire Gala outfits were your favorites, and which do you think needed a little more time at the tailor? Let us know in the comments and don’t forget to Let Your Geek Sideshow!