The first Frozen film was a worldwide phenomenon, and for good reason. The music, the characters, and the concept of “true love” existing beyond romantic relationships in Disney princess films was a revolutionary and welcome change of pace for many viewers.

Elsa’s personal, emotional journey in particular resonated deeply with audience members from all backgrounds. Her evolution and growth is evident in not just the plot and the music, but can be noted in her fashion throughout both films.

After years of isolation, at first set by her parents and then self-imposed following their untimely deaths, Elsa inadvertently learned that there must be something inherently wrong with her. She learned that her powers made her volatile, likely to cause unintentional harm to others, and that she could not trust herself.

Elsa spends much of her time alone in her room, often wearing gloves to disconnect her from her powers. Although her coping mechanism to “conceal, don’t feel” allows Anna to stay safe and keeps her icy powers in check, this method leads to pain and shame for Elsa. 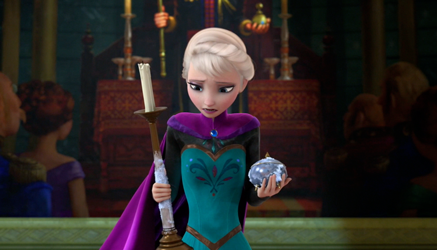 When Elsa comes of age and is crowned Queen of Arendelle, Elsa’s coronation dress keeps her almost entirely covered from the neck down and her hair is pinned tightly back, making her appear as if she is hiding as much as she possibly can in spite of being the center of such a public event. She also does not part with her gloves for the coronation, as she had worn them most of her life at her parents’ urging to help her conceal her powers.

Elsa is tense much of her coronation, almost losing control of her powers when she needs to momentarily remove her gloves. When Anna confronts Elsa on her tendency to isolate and accidentally removes a glove, Elsa unintentionally lashes out, revealing her powers in front of the entire kingdom.

Throughout her life, Elsa learned that being on her own was the only way to be safe, so she does the one thing that worked before; she flees to the mountains and isolates herself. As she processes her life and the recent events at her coronation, a sense of liberation washes over. She sheds her remaining glove and cape as she ascends further up the mountain. As she releases her powers without reservation, she feels a sense of freedom that she had not felt her entire life.

Tossing her newly gained crown aside, she releases her hair into a single cascading braid and creates a shimmering blue dress for herself using her powers. Her entire life prior to this moment had been built upon hiding herself and her powers. Her self-created outfit is no longer built upon hiding, but instead boldly revels in the powers of pure creation she possesses. 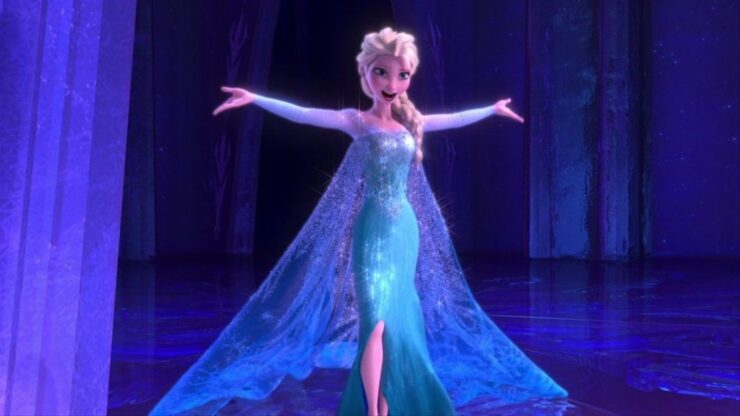 When Anna finds Elsa on the mountain, Elsa learns of the devastation that she has caused in Arendelle, Elsa does the one thing she spent her entire life trying to avoid: she hurts someone that she loves. Anna’s heart is frozen, and she only recovers from it when she steps into the line of Hans’ sword swing to save Elsa’s life.

The act of true love not only thaws Anna’s heart, but also shows Elsa that if fear is the impetus for losing control of her powers, then love is how she turns it back into the blessing her powers always really were. She realizes she is able to carry the beauty of her powers on the mountain back home, and no longer lives in fear of herself. She stays in her icy dress for the remainder of the film, and creates wonders and joy for the entire kingdom.

With this powerful revelation, it seemed like Elsa’s self-actualization comes full circle at the end of the first film. Elsa was a queen in control of her powers, and her kingdom and sister were safe with her as their leader. The story of Elsa, and all of the characters in the first Frozen film, finish with satisfying endings that highlight growth and connection. It seemed like the story was complete. 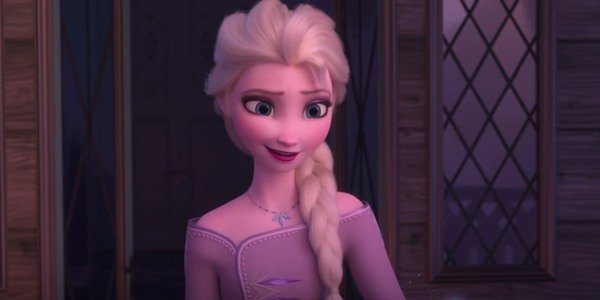 As the story begins in Frozen II, the kingdom of Arendelle and its queen and princess are exactly how we left them; all are thriving and grateful for the good fortune they have had. Elsa wears what appears to be a typical fabric dress and nightgown in varying shades of purple, seeming to suggest she has settled into to her role as Queen of Arendelle. Beyond a necklace she wears, and touches of shimmer and jewels in her clothing, there is very little in the way of fashion that outwardly alludes to the power Elsa possesses. 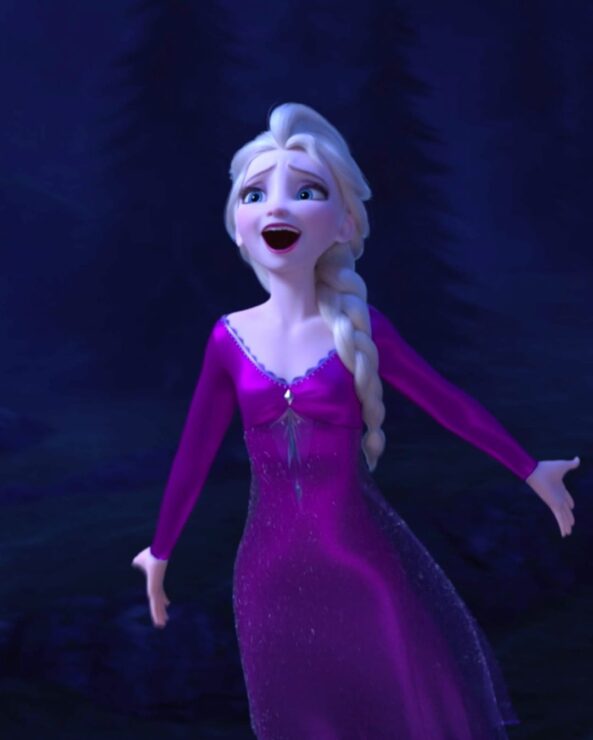 Frozen 2- Elsa Goes Into the Unknown

True to form, however, something in Elsa is restless, hinting at the fact that her journey and growth are not as complete as the end of the first film had viewers believing. Elsa hears a voice calling out to her and eventually cannot shut it out any longer. She responds to it with curiosity and an overwhelming drive to go “Into the Unknown.” Elsa suspects that by following the voice she will find someone like her, and maybe even some answers about who she is and the origin and meaning of her powers.

When all the citizens of Arendelle are exiled from the kingdom by the four elements, Elsa has no choice but to venture into the enchanted forest. Olaf, Kristoff, Sven, and most importantly, Anna, accompany Elsa on her journey. Elsa sticks with her iconic single French braid and dons a pale blue outfit that looks more reminiscent of how viewers left her at the end of Frozen in both color and design, suggesting Elsa is stepping into something that feels truer to who she is than being Queen of Arendelle does. It is equal parts beautiful and practical, featuring flowing, shimmery capes off of her sleeves and wintery looking motifs all over. 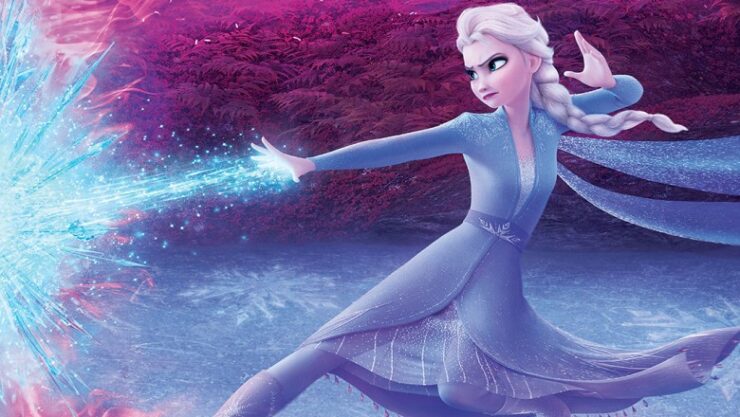 Frozen 2- Elsa’s Journey into the Forest

Throughout their time in the forest, the group encounters many wonders, people that will eventually become friends, and new knowledge about the history of Arendelle. As the group unintentionally fractures along the way into their own adventures, Elsa realizes that the last leg of her journey is one she must take alone.

Reaching the edge of the sea, she changes her iconic braid to a simple ponytail, and takes off the top layer of her traveling outfit, wearing blue leggings and a simple, shimmering pale blue dress. While this is likely in part simply about practicality, Elsa is also beginning to transform into a new version of herself once again. 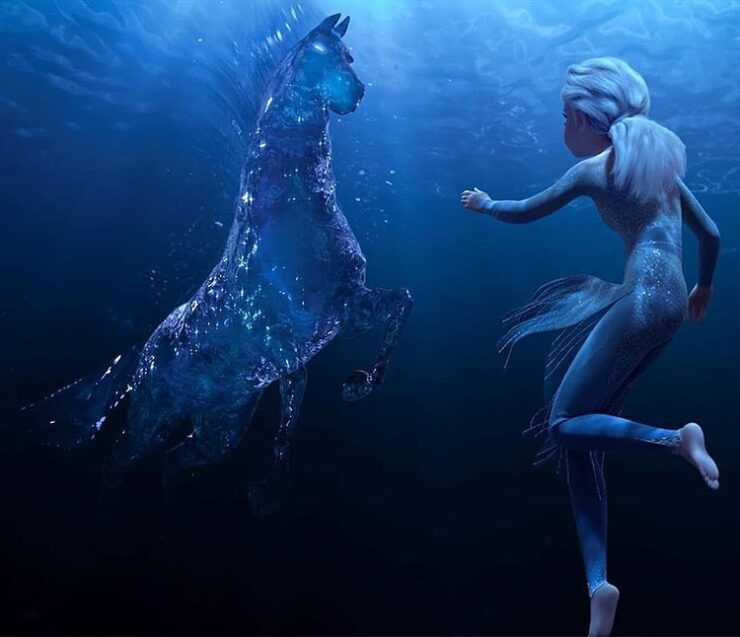 Elsa only manages overcome the treacherous waves and reach Ahtohallan once she tames Nokk, the water spirit that takes the form of a horse. As she dismounts, she releases her hair from its bonds and lets it cascade down her back freely, quite literally “letting her hair down” in earnest for perhaps the first time in her life.

Set to the song “Show Yourself,” Elsa eagerly begins to explore the frozen river as the voice calls her further inward. She asks the source of the voice to show themselves, recognizing that she feels like she is about to meet a friend she has always known, and is likely about to meet the person she has been looking for her entire life. Using her powers, Elsa moves through the obstacles the river presents with ease.

When she reaches her destination, memories from Elsa’s entire life surround her in the cavern. Elsa feels found, and in that moment recognizes that she was the person she had been looking for all of her life. It’s a revolutionary moment for Elsa, and her journey from isolation and self-doubt to independence and embracing her powers feels complete.

As she delights in her revelation and unbridled powers, Elsa’s dress is transformed into an icy white gown with long white and purple trains flowing from each shoulder, featuring designs on the bodice and skirt based on the elements she had just realized she was a part of. For the first time, Elsa seems grounded in and able to embrace everything that she is and all that this entails.

With the help of Anna, Elsa is able to free the forest by righting the wrong of their ancestors. Anna becomes the new Queen of Arendelle while Elsa stays in the forest as one of the guardian spirits of the elements. The sisters maintain their close bond in spite of the distance, and through their journey, were both able to become who they truly were.

The audience is left with the visual of Elsa riding Nokk across the sea, hair and gown rippling behind her, taking a deep, grounding breath and feeling truly at home. 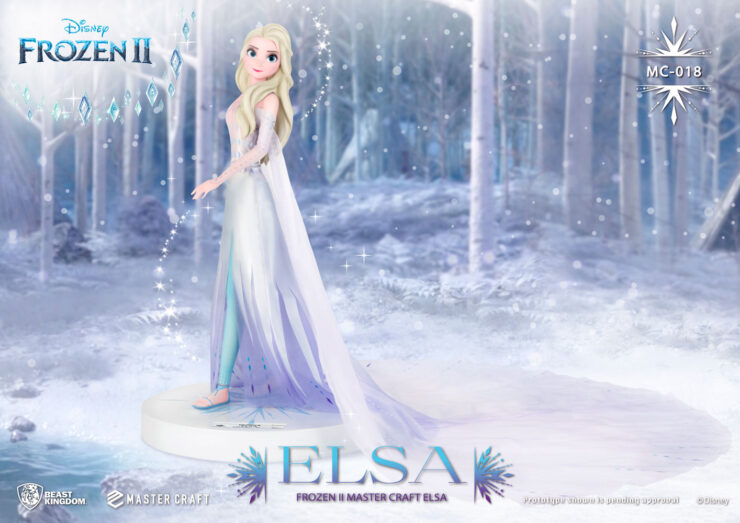 In a story filled with sisterly love, magical powers, and epic adventure, Elsa’s continued evolution remains one of the highlights of both Frozen and Frozen II. Witnessing her growth through the storylines, music, and her visual presentation provide the stories with a depth and meaning that brings viewers back to these stories again and again.

What is your favorite part of Elsa’s visual and emotional journey in the Frozen films? Let Your Geek Sideshow and tell us in the comments!