The Infinity Stones. Six individual artifacts forged during the creation of the universe so powerful that whoever brings them together would obtain the power of a god.

These precious gems have been the driving force of many MCU films over the past ten years, with many a villain trying to get their hands on just one of the stones. 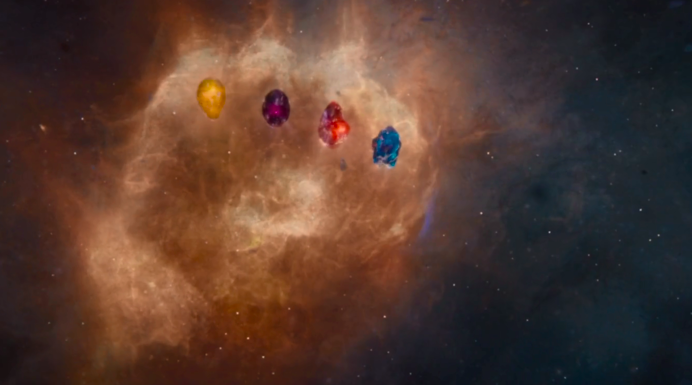 Currently, as of the end of Avengers: Infinity War, all six stones are the in possession of the mad titan, Thanos, each held in its own little crevice of his almighty gauntlet. But how exactly did they come to be there?

To know this, we will need to see where exactly they have been, and their journey to become part of the Infinity Gauntlet. 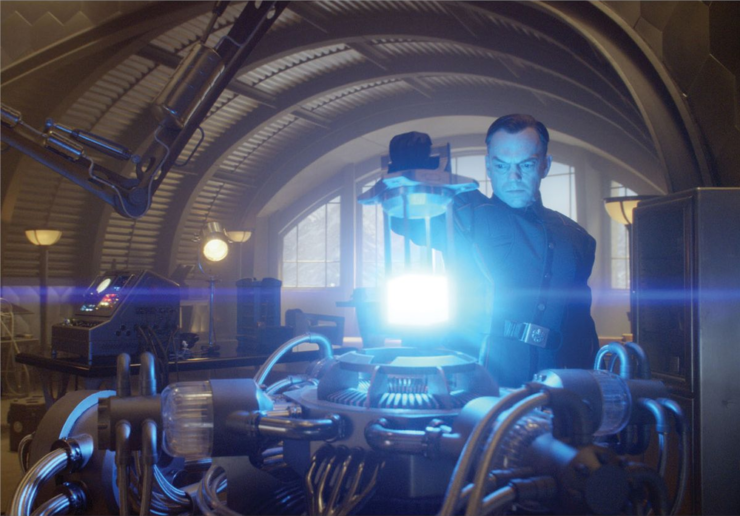 The Space Stone was the first of the gems we encountered in the Marvel Cinematic Universe, with the power to grant its wielder dominion over space- including interdimensional travel and powerful bursts of cosmic energy. It was placed on Earth by Odin over 600 years ago, after he encased it in a cube to keep it hidden from those who sought to use it for nefarious means. It was found in Norway during World War 2 and weaponized for HYDRA’s use by the Red Skull. Through the intervention of Captain America, the Red Skull’s plans were foiled, and the Tesseract was lost to the bottom of the Atlantic Ocean.

It was eventually found by Howard Stark, who studied its power and used the information to theorize a new element. It then ended up in the hands of Project PEGASUS, and the Kree scientist Mar-Vell who used it to try and create a ship capable of light speed travel. During its test flight, the ship was attacked by soldiers of the Kree Empire and crashed, which caused energies derived from the stone to surge into the ship’s pilot, Carol Danvers. However, the Tesseract itself had been safely hidden far away in Mar-Vell’s secret orbital space station. It was eventually recovered and returned to Earth by Danvers and Nick Fury… inside the belly of a rather adorable but dangerous Flerken.

Thanos then killed Loki, destroyed the cube container, and added the Space stone to his gauntlet.

AKA: The Scepter and… Vision?

Oh, what a complicated relationship Loki and Thanos have…

Just before the Chitauri invasion, Thanos tasked Loki with retrieving the Tesseract from Earth. In doing so, he let the God of Mischief “borrow” the one Infinity Stone he already had in his possession. With the Mind Stone placed into a bladed scepter, Loki was able to easily enthrall anyone he touched using the gem’s mental control powers.

However, after he lost the Battle of New York, Loki’s scepter was seized and held by S.H.I.E.L.D for study. It was then stolen by Hydra, whose leader at that time, Baron Strucker, used its power to experiment on people. While most of the test subjects died, the experimentation it did create both Quicksilver and the Scarlet Witch.

After Strucker’s defeat, Tony Stark and Bruce Banner discovered an artificial intelligence that lived inside the stone and attempted to implement it into their ongoing Iron Legion program. The A.I. rebelled and became Ultron. The android used the stone to create a perfect body for himself to inhabit. However, the Avengers managed to steal that new body and gave it life as their newest member, The Vision.

With the Mind Stone embedded in his forehead, and after proving himself worthy, Vision fought alongside the Avengers in numerous battles. When it became clear that Thanos was coming to take the gem for his gauntlet, Vision instructed Scarlet Witch to destroy the stone if necessary, even if it meant he would die. Reluctantly, she did, but it was all for naught as Thanos used the power of the Time Stone to bring Vision back and pluck the stone from his forehead.

The Reality Stone was found by the Dark Elves of Svartalfheim (bless you!), and transformed into a weapon they called the Aether. Malekith, the leader of the elves, planned on using the Aether to rewrite reality itself and plunge all the realms into eternal darkness. He was stopped by Bor, father of Odin, who then took the weapon and hid it.

Thousands of years later, during a convergence of the realms, the Aether was stumbled upon by Jane Foster. It bonded with her and slowly began to kill her. Malekith extracted the weapon from her and then proceeded with his original plan before being stopped by Thor.

The Aether was then returned to Asgard, but later moved to the possession of The Collector, Taneleer Tivan, so as to not have too many Infinity Stones gathered in one place.

Years later, Thanos attacked Tivan’s keep and stole the gem for his gauntlet. 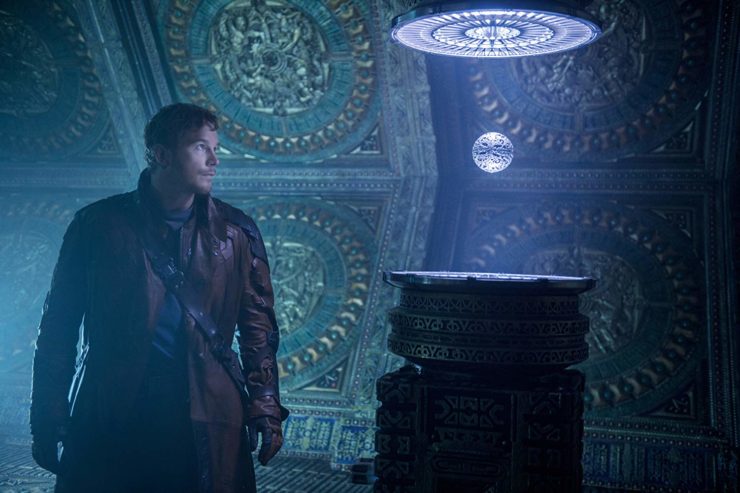 As with all the Infinity Stones, the Power Stone was initially used by the Celestials and other cosmic beings as a weapon of mass decimation. However, it was too dangerous to wield and killed many who touched it. Eventually, it was encased in an Orb and hidden away on the planet Morag for centuries.

Thanos sent the disgraced Kree Accuser, Ronan, to locate the orb, but ravager Peter Quill found it first.  Quill took it back to his buyer, who quickly no longer wanted it when he learned Ronan was after it. Through a series of shenanigans, the Orb was eventually to be sold to The Collector, but his assistant decided to use the gem to kill Tivan. The gem made short work of her when she grabbed it with her bare hand, and the ensuing explosion destroyed The Collector’s entire collection.

The stone then fell into the hands of Ronan, who betrayed Thanos and decided to use his newfound power to destroy the planet Xandar and the Nova Corps. Ronan was defeated by the Guardians of the Galaxy (with wicked dance moves) and the Power Stone was given to the Nova Corps for safe keeping.

We learn at the beginning of Avengers: Infinity War that Thanos and the Black Order destroyed the Nova Corps and took the stone as the first prize for his gauntlet. 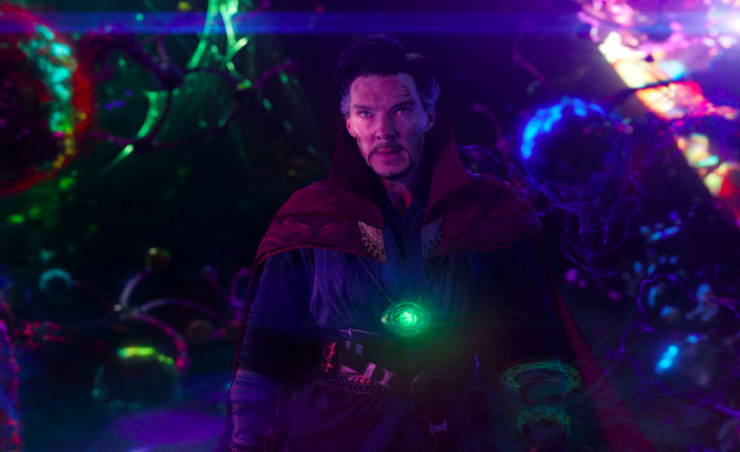 AKA: The Eye of Agamotto

The Time Stone was found by the sorcerer, Agamotto, and fashioned into a weapon. A stylish weapon, but a weapon nonetheless.  It was encased in a mystical amulet known as the Eye of Agamotto, which remained unopened except by the strongest of sorcerers. Unfortunately, not much is known about it or its journey other than that.  Dr. Stephen Strange learned the ways of the artifact and used it to… bargain with the dread Dormammu and drive the evil entity away from earth.

It became a standard part of Strange’s arsenal after that, and he would use it whenever things looked most dire. During Infinity War, he used the stone to view fourteen million six hundred and five different outcomes to the battle with Thanos, only one of which resulted in victory for the Avengers. Strange then gave the stone to the Mad Titan in exchange for the life of Tony Stark. 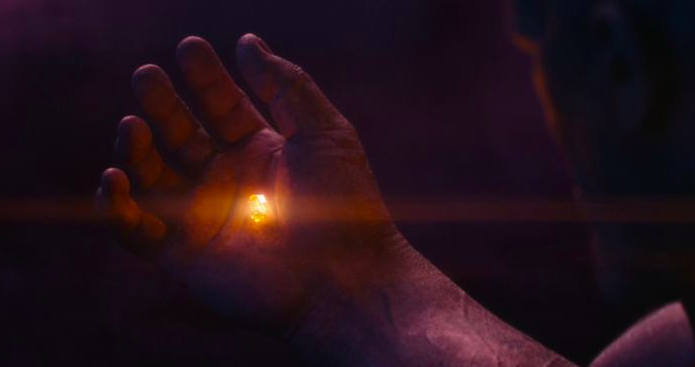 The stone we know the least about. Enshrined on the planet Vormir and guarded by wraiths of those who failed to obtain it, the stone can only be taken by one who gives up the thing most precious to them.

Thanos sacrificed his adopted daughter, Gamora, and collected the stone. We are still crying…

With Avengers: Endgame opening in theaters nationwide on April 26th, we will soon see how the Infinity Stones will factor in this culmination of the previous decade’s worth of stories.