Avengers: Endgame was a superhero movie masterpiece. The twenty-second MCU film wrapped up the original Avengers’ stories beautifully (Black Widow sacrificed herself for her dearest friend and Tony Stark was laid to rest)—but the story didn’t feel neat and clean when it came to the God of Mischief himself. What the heck happened with Loki?

It was a punch to the gut when Thanos easily crushed Loki at the start of Infinity War. In 2018, it truly felt like that was it for Tom Hiddleston’s fan-favorite character. Then came Endgame, and with it, Loki’s chance to be brought back to life.

During a flashback scene to The Avengers (2012), audiences witnessed the birth of an alternate timeline where Loki escapes capture by stealing the Tesseract and then disappearing . . . somewhere.

Thus begins the Disney+ trailer for his own crime-thriller series, Loki.

Where is Loki Now?

It’s been over a year of wondering what happened to the God of Mischief, but the trailer opens with the revelation that he ends up in a desert. At first, things seem eerily normal. Viewers are left thinking Loki simply traveled to the opposite side of the planet, which wouldn’t appear to be too off. That is, until things get strange and it becomes obvious Loki isn’t in Kansas anymore.

No longer anywhere recognizable, the Asgardian travels deep in an elaborately designed gold structure. The floors aren’t labeled with ordinary numbers either. Each floor is marked in obscure abbreviations, like “LK3” and “VG2”. A few are labeled in odd symbols such as a sort of smiling face and mysterious lines.

Die-hard comic book readers were quick to understand these Easter eggs. All signs point to Loki being captured by the Time Variance Authority, also known as the TVA. And in the next shot, we see Loki sporting the telltale TVA jumpsuit.

So, what is the Time Variance Authority? Briefly put, the TVA is an organization determined to keep the timeline unaltered. In the past, the “time cops” (who are mostly composed of clones) have gone so far as arresting the X-Men and Loki for crimes that have yet to be committed.

But the TVA easter eggs are not the weirdest part of the trailer. It’s who Loki runs into next that gives viewers a headrush. It’s someone no one would have never guessed to star in a Marvel feature: Owen Wilson.

Wilson plays Mobius M. Mobius, a high-ranking member of the TVA who keeps up with Loki’s banter and lies easily (his name was revealed by the closed caption view of the trailer). Mobius tells Loki he just wants to “talky-talky.” The antihero asks, “How long have you been here?” to which the riddling captor answers: “It’s hard to say, you know, time passes differently here in the TVA . . . you’ll catch up.”

Chaos at the Compound

Next, comes a montage of all hell breaking loose on a military-like campground. Soldiers search in the dark for something or someone. We see a hooded figure lurking in the shadows who then sets the grounds on fire. The cloaked figure has no intention of leaving any survivors either.

The arsenal attack is quick but it’s long enough to see that the last soldier left alive bears an uncanny resemblance to Captain America. Could Loki have traveled to an alternate timeline where this man is Captain America? But then, who is the hooded figure?

Loki doesn’t seem to mind the mess. He thrives in it; he calls it “glorious” as the subsequent scene begins with ominous music. Here, we see an imprisoned Loki on trial. Most likely charged from altering his own timeline. The courtroom itself is unique with three Mt. Rushmore-like heads behind the presiding judge. These might very well be the founders of the TVA and many have been quick to theorize one of these founders is Kang the Conqueror. It makes sense, as the villain is already confirmed for Quantumania, the next installment in The Ant-Man and the Wasp film franchise.

What follows is a quick montage: Via hologram, Loki watches the Avengers team up to take him down, he works with the TVA to capture a criminal, Mobius hands something to a little girl in a church with stained glass windows of a Mephisto-like demon, and the trickster god pulls out his trusted daggers in front of the judge from the previous scene (perhaps breaking free from the time organization once and for all). It is enough to make any fan’s head spin.

Of course, the Marvel series would not be complete without epic space scenes. There are several grand and beautifully rendered sci-fi shots. Similar to Captain America’s doppelganger, fans have noted that the figure on the purple planet looks too similar to Black Widow. Could this be the true Natasha Romanoff that died in Endgame? An alternate widow made possible by the Tesseract? Or some other character entirely? 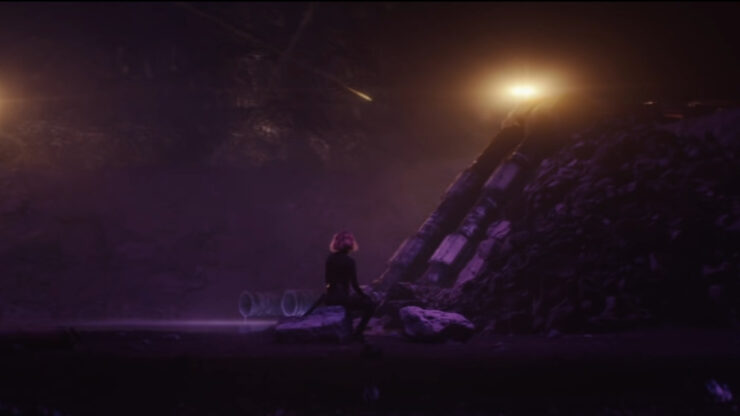 Viewers don’t get much time to wonder, as scenes of an apocalypse come shortly after the tease.

Then, there is the biggest easter egg of all (at least it is for true crime fans). Loki is dressed in a black and white suit and slicked-back hair, suggesting the Asgardian onboard a plane is meant to be D.B. Cooper.

For the uninitiated, D.B. is a real-life FBI-wanted hijacker. His real identity has remained a mystery since his disappearance 41 years ago. This is a tongue-in-cheek way of filling in an unsolved case with MCU lore. It should be a wild time when we do get to see the trickster stir up mischief on the aircraft.

“Brother . . . you better be ready,” Hiddleston says in a voiceover. However, there is no Thor visible but it seems likely Chris Hemsworth will make an appearance now that we have heard Loki address him directly.

The trailer ends with two more easter eggs: Loki is dressed up as a slimy politician complete with his own promotional button, a nod to the 2016 four-part Vote Loki comic (where Loki ran for president) and, in this same shot, a Polybius. The latter is a 2000s urban legend about “the most dangerous game” of all time that allegedly had mind-altering effects. Like the D.B. Cooper reference, this could be a way of inserting Marvel history into our own reality.

Are you looking forward to Loki starring in his own crime-thriller? What other historical incidents could be the God of Mischief’s fault? Let Your Geek Sideshow and tell us your thoughts in the comments!

Doctor Strange In the Multiverse of Madness Casts America Chavez, and more!