Has the God of Mischief gotten himself into more trouble than he can handle? Episode 1 of Loki certainly showed the Son of Odin flopping around like a fish out of water in the Time Variance Authority (TVA).

“Glorious Purpose” opened from the last time we saw Loki alive in Avengers: Endgame. He manages to escape the Avengers’ clutches and uses the Tesseract to transport himself to the Gobi Desert. Here, surrounded by agents in all black, he tries to fight, but, unfortunately for the Asgardian, these guys are worthy foes. All it takes is one swift hit with a time-power baton to put him in his place.

This scene sets the tone for the rest of the episode (and gives us the best Marvel GIF). Over and over, we watch as Loki tries to outsmart and outpower TVA agents to no avail. But it’s not just their control of time or bureaucratic teamwork that keeps him from escaping. The TVA are worthy opponents because they know everything about him, so much so that agent Mobius M. Mobius (Owen Wilson) breaks down Loki’s spirit and has him questioning his goals and very identity. What is Loki’s glorious purpose?

The latest MCU series gave us much to think about, so, let’s talk about it. Here are the biggest takeaways from the Disney+ series premiere.

Loki is D. B. Cooper

Most unsolved cases get lost in time, collecting dust in forgotten files and cabinets for the rest of history. Most. But the D.B. Cooper case is an exception. Over the years, the man who hijacked a plane and stole $200,000 in ransom (or, attempted to) in 1971 remained a mystery.

Not any longer. It turns out that D.B. Cooper was just another guise of the God of Mischief who had lost a bet to his brother. It all makes sense now. “I can’t believe you were D.B. Cooper!” Same, Mobius.

It’s taken decades to crack one of America’s most infamous unsolved cases, but we’re glad Marvel finally did.

The Infinity Stones Are Used as Paper Weights

Infinity Stones are powerful. They were created by the Big Bang and were hunted down by Thanos, who was once dubbed “The Most Powerful Being in the Universe.” And yet… white-collar workers of the TVA are using them as… paperweights. It’s enough to make our heads rattle.

As fans of the MCU, we have spent about a decade hearing about how all-powerful these things are. In Phase Three, we saw their power play out by wiping out half of all life in the universe. And yet, they mean nothing in Loki.

We can all understand how humbled Loki felt after discovering this in “Glorious Purpose” and now that we know these stones have no real value, we can only look forward to stronger weapons and worse villains for the next phases of the MCU.

Mephisto hype is real. It reached its peak during the final episodes of WandaVision. First, we thought Agatha Harkness was Marvel’s devil. Then, we swore he’d be the real villain at the end of the finale, the Big Bad the witch was working for all along. Alas, Mephisto never showed. 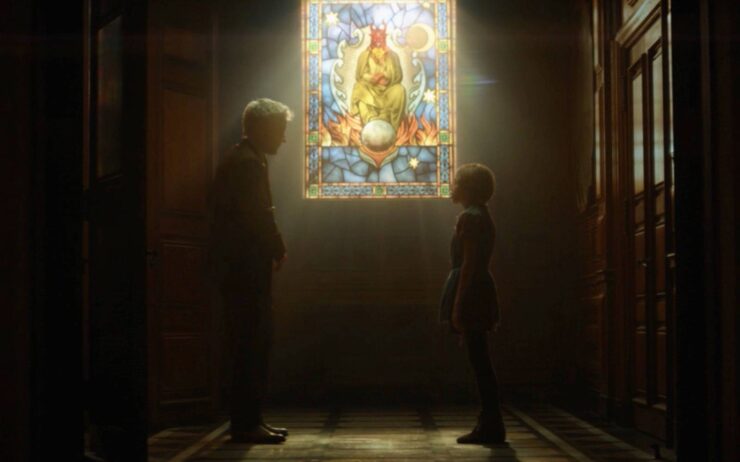 Still, we held on to the idea that the devil in the stained glass window in Loki trailers was that devil. Again, our expectations have been tempered. Director Kate Herron tells us the red devil in the church (pictured above) is coincidental.

Then, who is the real villain in the series? It turns out it’s none other than the God of Mischief himself, and Mobius needs Loki to help the TVA find the other variant version of himself. I don’t think any of us saw that coming, but what’s even more unexpected is just who that variant could be.

As of now, all signs seem to point to Lady Loki, a comic character created in 2008 when Loki took over the body of a woman. The TVA’s file on the captured Asgardian is one clue it is this female version, indicating Loki’s sex as “fluid.” Many fans have also been quick to notice Sophia Di Martino’s role remains unknown, but set photos have shown her in a costume too similar to Tom Hiddleston’s to be a coincidence.

Only time will tell who the mysterious cloaked variant is, but we’re definitely not disappointed it isn’t Mephisto. Lady Loki or any other Loki variant is just as awesome. 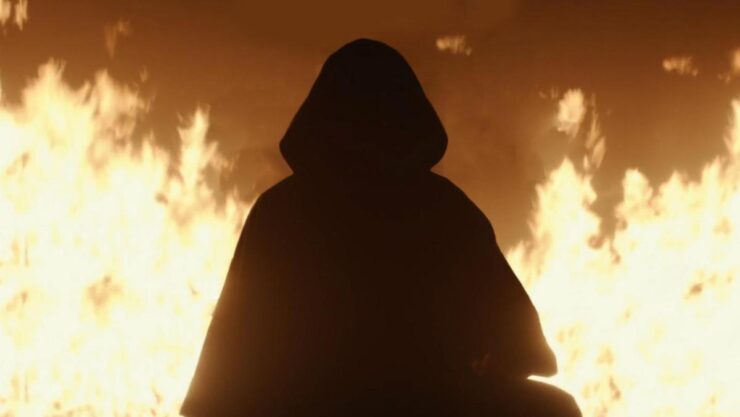 Variant(s) Loki is roaming, altering, and manipulating the timeline. The TVA made it clear whoever they’re chasing down is no good. They must be stopped, but what about the Loki they currently have in custody? Mobius questions this version over and over, trying to get to the bottom of the Asgardian’s motives, but it doesn’t result to much.

It seems Loki is just as confused about his identity as Mobius is. Remember, this isn’t the character we saw mature through the MCU who tried to defeat Thanos. This version is the villain who tried—unsuccessfully—to take over New York City, which resulted in 74 innocent deaths and over $88 billion in damage. His development is stunted compared to the prime counterpart, as he hasn’t had the same experiences.

Still, Mobius thinks this post-Battle-of-New-York Loki is better than the variant causing chaos in the Sacred Timeline. He has faith that present-day Loki can help him find a more sinister version of the God of Mischief (who we see ruthlessly kill several TVA agents in a blaze toward the end of the episode).

Only time will tell whether this Loki will wise up like we saw him do in Phase 3 or continue to go down a villainous path.

What did you think about Episode 1 of Loki? Which moments were your favorite? Let Your Geek Sideshow and let us know your thoughts in the comments!