A Mysterious Mandalorian: The Screen History of Boba Fett

How Did Boba Fett Rise to Fame with Fandom?

There’s more than enough scum and villainy in the Star Wars universe to go around, and if you’re a dedicated bounty hunter there are plenty of chances to make your mark in a galaxy far, far away. The Galactic Empire is filled to the brim with rogues, crime lords, and strongmen, but there’s one name that strikes fear into renegades across all of the known star systems: Boba Fett, the fierce Mandalorian.

He’s known far and wide as the best bounty hunter in the galaxy, and he’s got the Wookie scalps to prove it. Though his presence in the Star Wars movies amounts to less than ten minutes in total, Boba Fett has been a favorite with fans for decades.

So, how exactly does a character with so little screen time and not much dialogue become so popular? It’s true that Boba Fett doesn’t say a whole lot or stick around for very long, but he adds an air of menace to every scene that he’s in.

Whether he’s in the employ of Darth Vader or Jabba the Hutt, everyone knows that Boba Fett is a man to be feared. His sharp remarks are straight to the point, and he only has time to discuss the job at hand. Boba Fett is the quintessential man of mystery. He’s never seen without his helmet or armor in the original trilogy; and it’s clear by their condition that he’s seen more than his fair share of combat.

The fearsome bounty hunter’s introduction came after the release of Star Wars, but it wasn’t in The Empire Strikes Back as many believe. Boba Fett first appeared on the small screen as a part of an animated feature in the Star Wars Holiday Special.

In the ten-minute short, Han Solo and Chewbacca are in possession of a mystical talisman that is also being sought by the Empire. There’s only one problem: The talisman is contaminated and it transmits a sleeping virus to humans, which is something that Han Solo finds out the hard way as the Millennium Falcon hurtles towards a watery moon in the Panna system. 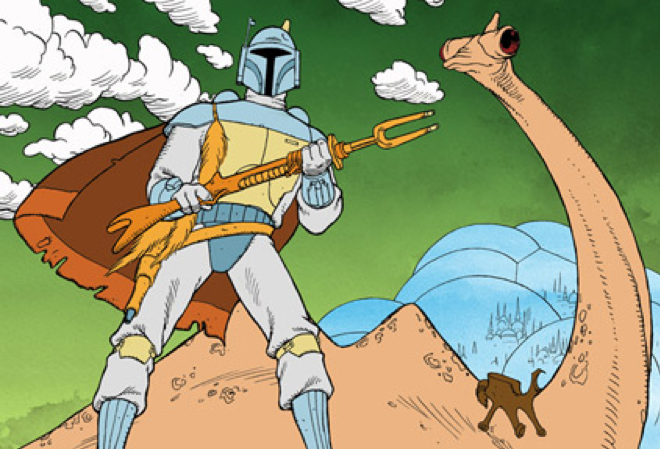 In an effort to help their friends, Luke Skywalker, C-3PO, and R2-D2 hop into a Y-wing and attempt a rescue. Once Luke reaches his destination, he is immediately attacked by a gigantic monster. Boba Fett, mysteriously in the right place at the right time, saves Luke’s life and turns the monster away.

Did Luke and Boba Fett just become friends? Luke certainly thinks so; and together they make their way to find Han and Chewbacca. As soon as Luke enters the Millennium Falcon, he is also stricken by the sleeping virus. So, Boba Fett and Chewbacca go on a mission to the city to retrieve the serum that will cure them.

Although he seems to befriend Luke and Chewbacca, Boba Fett is secretly working for Darth Vader, and he makes contact with his employer while seeking the serum. Vader wants Boba Fett to remain with Luke and lead him and the Empire to the new Rebel base. With serum in hand, Boba Fett and Chewbacca return to the Millennium Falcon.

R2-D2 is suspicious of Fett’s intentions and reveals that he intercepted the communication between Fett and Vader. Once his cover is blown, Boba Fett makes a hasty retreat, setting the stage for the conflict that follows between Boba Fett and the Rebel leaders throughout the rest of the Star Wars series.

Fans who were introduced to Star Wars when it was originally released know that Boba Fett was never in the original version of the film. But the revamped special edition of Star Wars features Boba Fett as one of Jabba the Hutt’s enforcers who is present as Jabba attempts to collect a debt from Han Solo. Though he has no dialogue in the scene, Boba Fett makes a welcome addition to the updated version of the film, establishing his long history with both Han and Jabba the Hutt.

The Empire Strikes Back is where Boba Fett makes his lasting mark. Throughout the movie, he’s on the hunt for Han solo, and he won’t let anything get in his way. When we first encounter Boba Fett, he’s aboard Darth Vader’s ship receiving orders. Vader warns Boba Fett that he doesn’t want Han Solo to be disintegrated, implying that Boba Fett has previously done this to others.

Next, we see Boba Fett tracking the Millennium Falcon to Bespin, where Vader and Boba Fett confront Han Solo in Cloud City. After standing by as Han gets tortured and placed into carbon-freeze hibernation, Boba Fett loads Han’s frozen body into the cargo hold of his ship, Slave I. The last we see of Boba Fett in Empire is the Slave I departing to deliver the hibernating Han Solo to Jabba the Hutt.

Some time has passed when we see Boba Fett again in Return of the Jedi. He has collected his reward for the return of Han Solo, who is now a display item in Jabba’s palace. Princess Leia, Luke, Chewbacca, and Lando Calrissian, have devised a plan to rescue Han, but that plan gets thwarted. Leia winds up in the service of Jabba, and Luke, Chewbacca, and a newly-revived Han, temporarily blinded by hibernation sickness, are all set to be executed.

Instead of a quick death, they will be pushed into a sarlacc pit, where they will be slowly digested over a thousand years. Luke and his companions attempt to fight their way out of that situation, and Boba Fett steps in to the fray. 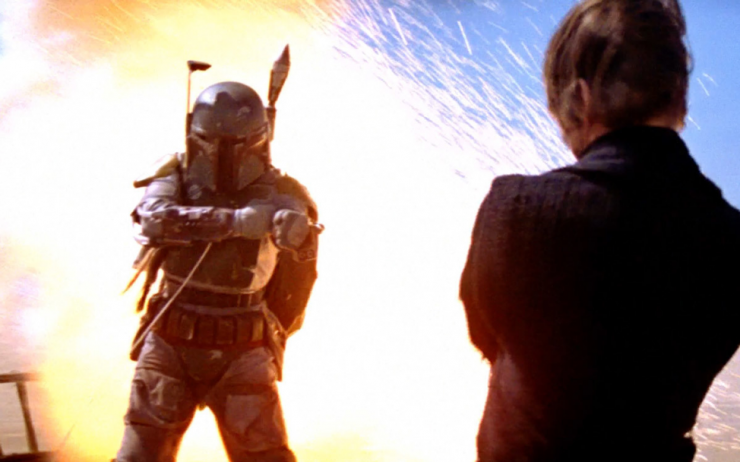 First, Boba Fett confronts Luke, who destroys Fett’s blaster with his lightsaber. Boba Fett then tries to bind Luke with his fibercord whip, but is once again no match for Luke’s laser sword. Then, in a stroke of dumb luck (or possibly through the will of the Force), Boba Fett is sent zooming into Jabba’s barge by a near-blind Han Solo and falls unceremoniously into the sarlacc pit.

Even the best bounty hunter in the galaxy has his off days, but for many Boba Fett fans this was an insulting end to such a fearsome and resourceful character. But was it really the end of Boba Fett? 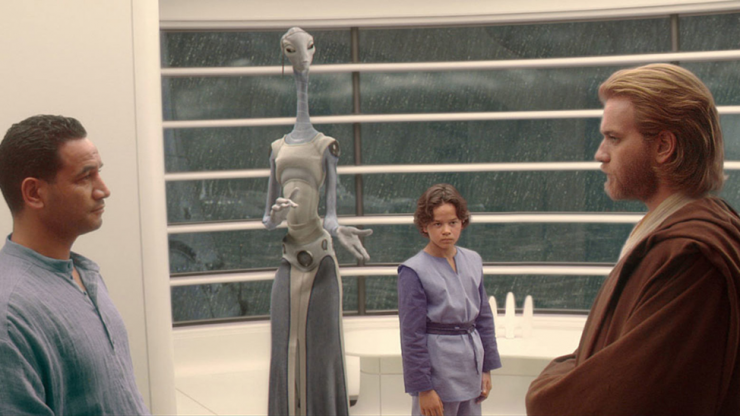 Even after his supposed downfall in Return of the Jedi, fans were still clamoring for more of the character. They got exactly what they wanted in Attack of the Clones. It’s in this film that we discover Boba Fett’s true identity as an unaltered clone of the Mandalorian bounty hunter Jango Fett – the prototype for the clone soldiers in the Grand Army of the Republic. Jango Fett is a fierce warrior in his own right who is raising Boba as his son, teaching him everything he knows about being a bounty hunter.

Young Boba witnesses Jango Fett go toe to toe against none other than the Jedi Obi-Wan Kenobi in a fight that ends in a stalemate. Later in the film, Boba witnesses the death of his father Jango at the hands of the Jedi master Mace Windu. These incidents establish his long-standing animosity for the Jedi and fuel his desire to become the best bounty hunter in the galaxy.

Only time will tell if we have truly seen the last of Boba Fett, but it’s more than likely that the relentless bounty hunter will find his way to new adventures.

Do you have a favorite Boba Fett moment?  Let Your Geek Sideshow and tell us in the comments below!