In Obi-Wan Kenobi™ Part I, Obi-Wan Kenobi’s™ quiet life on the planet Tatooine™ was interrupted. Princess Leia Organa™ was kidnapped, and Bail Organa™ charged his old Jedi friend in retrieving her.

Part II brings Obi-Wan Kenobi closer to the Force — but also closer to his enemies, as well as a haunting past from which he can no longer hide. Read our recap and review of the second Obi-Wan Kenobi episode below, plus get our predictions for Part III. 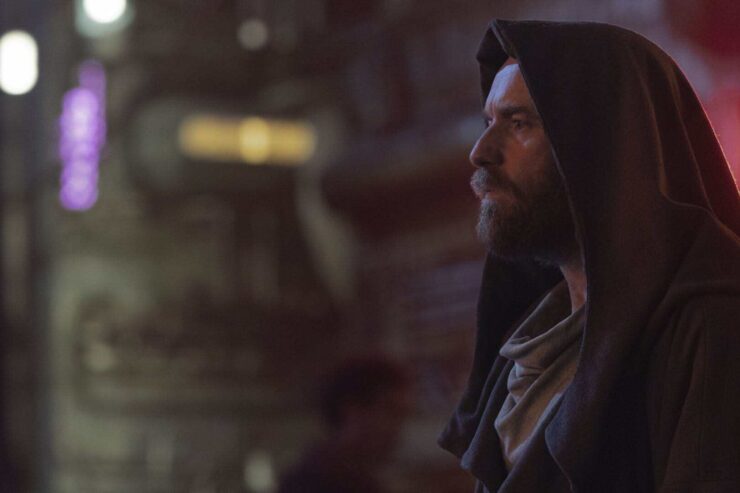 After tracking the kidnappers’ ship’s signature, Obi-Wan arrives on the seedy city planet Daiyu™. Here he must rely on good old fashioned information gathering, as all signals in or out are blocked. Thus Obi-Wan treads uneasily through the galaxy’s neon-drenched underbelly searching for any signs of the missing princess.

It’s interesting to get this peek at a Star Wars™ city culture that isn’t just senators and the Coruscant upper crust. No doubt paying homage to the sights and sounds of the bar in which Obi-Wan finds himself in Attack of the Clones™, Daiyu is a major change of pace for Old Ben. He even asks his master Qui-Gon Jinn™ for guidance because he feels so out of his element. 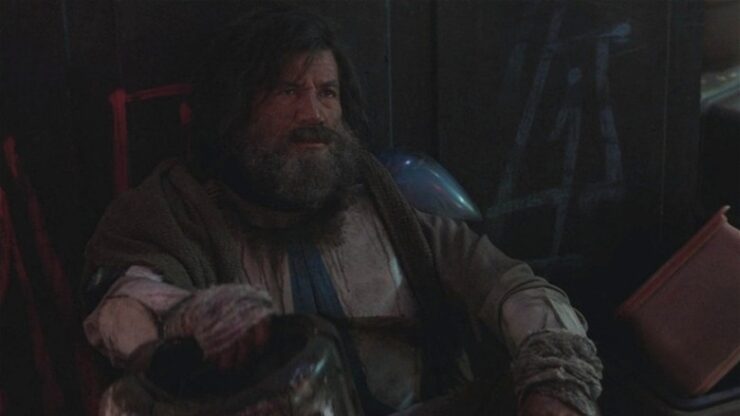 There are two important cameos in the first few minutes of our time on Daiyu. One is a veteran clone trooper™. The disheveled man (played by Temuera Morrison) asks Obi-Wan to spare a few credits, and Obi-Wan obliges. We see the slight fear and trepidation in his face as he tosses the currency. Nevertheless, Obi-Wan’s altruism outweighs his unresolved war trauma in this instance.

Second is an unnamed spice dealer. Die-hard Star Wars fans might recognize this actress as Esther Rose McGregor, Ewan McGregor (Obi-Wan)’s daughter. Her role is likely a reference to one of Ewan’s other iconic roles as the heroin dependent Mark Renton in Trainspotting (1996). Their exchange is sweet, and touches on the themes of family that are woven into the series.

Eventually Obi-Wan is led to another “Jedi” who operates in Daiyu, helping refugees for a hefty fee. Haja Estree™ — played by Marvel’s Eternals’ Kumail Nanjiani — introduces himself to Obi-Wan and is promptly exposed for the con man he is. Obi-Wan then makes Haja help him look for Leia.

Haja sends Obi-Wan to a spice lab. In a teal plastic poncho disguise very reminiscent of Breaking Bad, Obi-Wan infiltrates the place only to be caught in Third Sister’s™ trap. Before the ambitious Inquisitor can arrive, however, Obi-Wan breaks a spice canister. The red substance released into the air confuses and elates Vect Nokru™ and his associates, who are afterwards easily dispatched as the Jedi continues his search.

For the first time since her birth, Obi-Wan sees Leia Organa. She’s reluctant to trust him but she decides it’s her best option for escape. They leave the lab and Obi-Wan puts Leia in a new costume. The hooded orange shift is unmistakably similar to her mother Padmé Amidala’s Naboo™ handmaiden outfit. This isn’t the first costume reference the show makes, and it definitely won’t be the last. We’ve been loving all of them, of course. 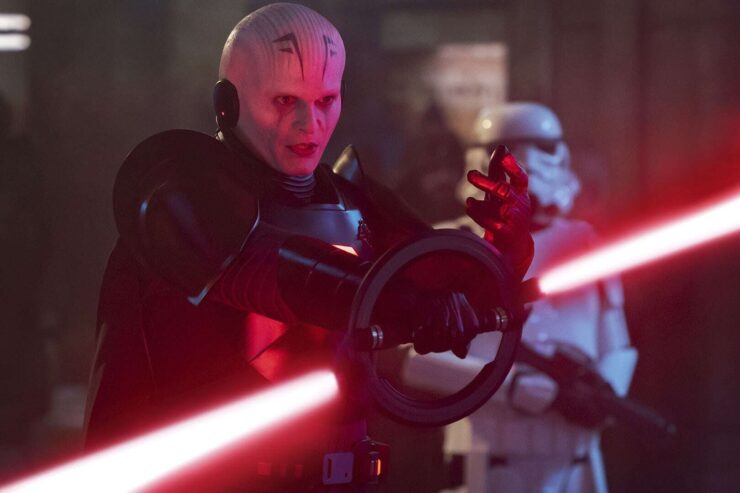 While Obi-Wan and Leia attempt to flee Daiyu, the Inquisitors arrive to confront Third Sister/Reva™. The Grand Inquisitor’s™ tirade against Reva shows the hierarchy among the Jedi hunters — he even calls Reva “the least of us.” His words hint at a natural ability in Reva, possibly an allusion to the Force, before he tells Reva that he will be taking Kenobi in himself. Against his command to stand down, Reva puts a price on Obi-Wan’s head John Wick style.

The rising tension among the Inquisitors teases there are secrets to be revealed about Reva’s past, especially this natural ability and that she was taken from “the gutter.” Since the Inquisitors despise Jedi more than anyone else, it could be a hint of her connection to the Jedi, even if she only received training as a youngling. Fifth Brother™ points out that she seeks the favor of someone, presumably Darth Vader™. All of these details are reminiscent of Trilla™, AKA Second Sister, from the Star Wars: Jedi Fallen Order™ video game. 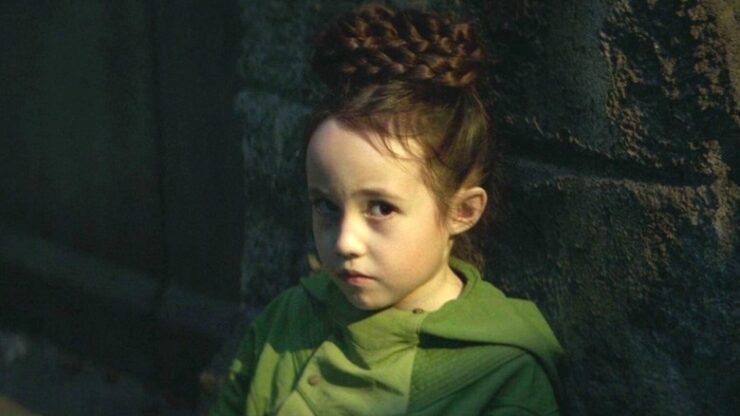 In another father-daughter themed bonding moment, Obi-Wan takes Leia shopping. While she wants something a bit more ostentatious, she eventually agrees to a “little green cape” and then eyebrow-raises her way into some gloves. This ensemble, plus her braid crown, is giving distinctly Endor™ vibes.

Also indicative of Original Trilogy Leia are her personality, maturity, and attitude. She is wise for her young age, her keen perception perhaps a product of her innate connection to the Force. She’s also knowledgable about the ways of the Jedi — despite the danger, did her progressive parent Bail teach her? However, even though she’s a sagacious 10 year old, she gets to have a little fun and request Obi-Wan make her float. With the pair surrounded by rooftops, we likely all clocked this foreshadowing right away.

Interestingly enough, although unsurprisingly, Obi-Wan never uses his lightsaber despite it dangling rather freely from his belt — with no Commander Cody™ to assist, who will catch that weapon when he loses it? Jokes aside, however, we can consider that Obi-Wan is trying to keep a low profile. But a lightsaber’s use is also tied to the Force-wielder’s connection to the Force. If Obi-Wan isn’t using his saber, how long has it been since he’s used the Force? Perhaps since Mustafar™? 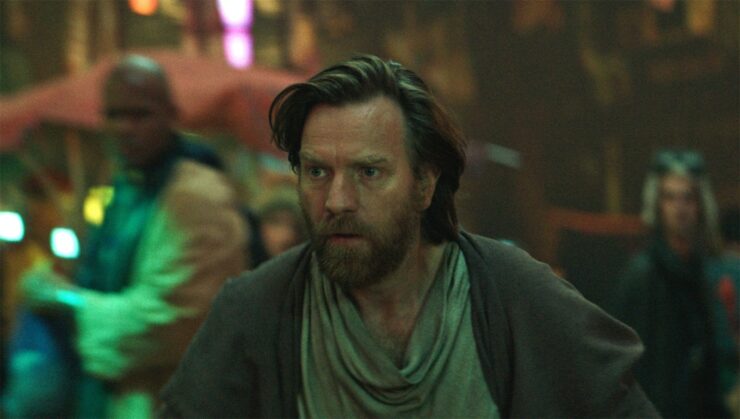 This big question is answered momentarily. Leaping across a large gap, Leia misses and plunges to certain doom. Except Obi-Wan reaches out his hand, clearly straining. Nonetheless he makes Leia float safely to the ground. Thus Obi-Wan regains the little one’s trust as well as his connection to the energy that binds all beings.

Cornered by the Third Sister

Our hero is out of options. Fortunately he finds an unlikely ally in Haja, who is suddenly inspired to do the right thing. He sends Leia to a cargo transport ship. Before Obi-Wan can join the princess, Third Sister corners him in a hanger. She taunts him. She belittles him.  She stalks Obi-Wan through the area and references her boss: Lord Vader. Then there’s a shift in the air. An emotional beat, an unmissable ache. Obi-Wan’s breath catches and his entire body freezes. Smirking, Reva says:

“Oh, you didn’t know. He’s alive, Obi-Wan. Anakin Skywalker is alive. And he’s been looking for you for a long time.” 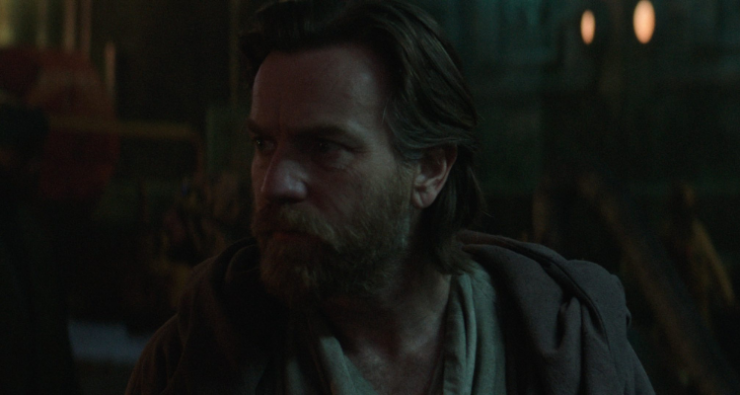 But before the weight of this moment can take hold, once again, she’s interrupted by the pompous Grand Inquisitor. Something extremely shocking happens next, something that has still left us reeling. Weary of his arrogant monologue, Third Sister runs the Grand Inquisitor through with her lightsaber. This character is alive later in the Star Wars timeline, though, and plays a vital role in Rebels™. So his wound shouldn’t stop him from showing up in the next episodes, most likely with an even worse grudge against Reva than before.

Now free to proceed, Reva resumes her hunt. But that interruption bought Obi-Wan enough time to flee. He finds Leia, jumping aboard the cargo ship in the nick of time. Like us, though, Obi-Wan is still spiraling because of this new information.

And look, it makes sense. Of course Obi-Wan doesn’t know Anakin Skywalker™ is alive. Last they saw each other, Anakin was essentially a charred corpse. Yet since we, the audience, are privy to this secret, the reveal is all the more gutting.

To pour salt on our wound, Ewan delivers a heartwrenching “Anakin.” The name is uttered with such guilt and grief. And then immediately we flash to Darth Vader, scarred and of a chalk-white complexion, inside a bacta tank™. Has he sensed his master’s return to the Force? When will they meet? No one is certain, but we do know their reunion is the most highly anticipated moment in the entire Obi-Wan Kenobi series.

What did you think of Obi-Wan Kenobi Part II? Join the conversation alongside other Star Wars fans in the Let Your Spoiler Sideshow Facebook Group, and don’t forget to Let Your Geek Sideshow!