It was only a few months ago when Sony and Disney duked it out for full control of Spider-Man. For a short while, it looked like Disney had lost the custody battle but then they managed to reach an agreement and let Spider-Man play with the Avengers once more.

It was a close call.

Fans were left to wonder how this new Spidey agreement would play out. Fans were hungry as an organ-eating symbiote for a Venom/Spider-Man crossover. That had to be the next move. With the success of Venom, how could it not?

Then Sony surprised fans this week by debuting the first Morbius trailer, yet another film spinning out of the Spider-Man continuity.

It was only a few months ago when Sony and Disney duked it out for full control of Spider-Man. For a short while, it looked like Disney had lost the custody battle but then they managed to reach an agreement and let Spider-Man play with the Avengers once more.  It was a close call. Fans were left to

Hang out with us while we breakdown this first trailer starring the Prince of Darkness (a very real and highly coveted emo award of ‘00s) himself, Jared Leto.

Viewers first see Michael Morbius as a sickly kid. While all his classmates are off running around doing all the things kiddos do, Michael is left to suffer from a serious illness.

His sickness isn’t the only thing that sets him apart from his peers. The young boy, reliant on crutches, spends his time in intellectual pursuits. He plays chess, a very smart hobby. At least, that’s what the trailer is insinuating.

The first few glimpses also do a great job of revealing the movie’s tone. Fans of Venom, gothic literature (i.e. Bram Stoker’s Dracula), and moody-vampy films such as Daybreakers and Underworld most likely are living for the film’s dark aesthetic and bleak setting. Its surrounding environment seems like ghosts and all things spooky could be lurking at every corner.

So, who does the little sickly kid become? We see him in adulthood a moment later, and there have been no miracles for Morbius. He’s still suffering from a life-threatening condition.

A few things have changed, though. The chess really did allude to his brilliance. He has grown into an intelligent doctor who has devoted his life to helping children like him, although, by the looks of things, he should be the one in white gown and slippers.

But, just in case Leto’s serious bags under his eyes aren’t enough to clue us in, he tells us, “I have a rare blood disease and I’m running out of time.”

It’s a similar story to so many vampire classics. No one in their right mind would choose to become undead- that is, not until they’re left on the brink of death. When forced to choose whether to live or die, who would willingly choose the latter? And that’s the choice Doctor Morbius makes. He wants to find a cure for his illness no matter the consequence.

His appetite to live means that he will do anything (legal or not) to save himself. Like a certain billionaire playboy, Michael looks to have serious resources as he flies on a private helicopter to a creepy remote location.

In another scene, we see Michael’s colleague Martine Bancroft (Adria Arjona) express concern. In the comics, she eventually marries him despite what he becomes. We will have to wait to see what the movie has in store for these two.

But then we’re back to the bat cave. Despite all the concerns and warnings from loved ones, the man on the brink of death cuts open his palm and offers his tainted blood to a lot of bats. Like, A LOT of bats.

The scene cuts as swarms attack him and his crew flees toward the helicopter, and we get a similar shot to Batman Begins when young Bruce falls down a well totally encircled by bats.

Who woulda thunk maybe it wasn’t such a good idea to offer up your body to a bajillion bats? For better or worse, Michael’s body starts going through some serious changes after his unconventional cure. Hubba hubba changes.

He’s no longer frail, sickly, or in need of a cane. Instead, he’s preternaturally fast, strong, and suddenly jacked. Oh, and he can teleport! It’s reminiscent of the first live-action X-Men movies with Nightcrawler shooting around locations, leaving big puffs of CGI smoke.

Believe it or not, the teleportation isn’t even the coolest power. Echolocation. Heard of it before? It’s the ability to locate objects by reflecting sound as bats do. If there is one jaw-dropping moment here (there are actually several), it’d be this superpower.

Morbius’ eyes turn a cloudy white with demonic centers as he scans the room like Daredevil, using sounds to locate enemies.

It’s in one of the last scenes where we see just how badly the initial cure has gone. Michael is neither his sickly self nor his newly fit form. The trailer shows us Morbius and I have to say, he’s wicked cool.

This is a creature, no ordinary man, with blood-red eyes, fangs, and corpse-like skin. He has become a living vampire. 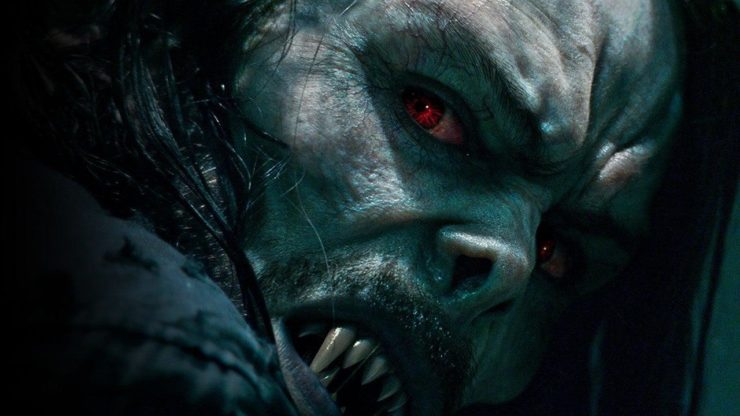 Morbius is a character so unlike any in the MCU. Speaking of that…

Geez Louise, Sony has all but confirmed a potential crossover with the Marvel Cinematic Universe. I’m talking about the end credit of this trailer. It’s a freaking Vulture cameo!

I’m surprised director Daniel Espinosa didn’t save this golden Easter egg for the film itself but, wow. Is it too much to hope for an actual Spidey in the real end credits? Do all signs point to a Sinister Six film?

Only time will tell how much Sony and Marvel crossover fans will actually get.

Morbius premieres on July 31. What did you think of the teaser trailer? Let Your Geek Sideshow and tell us your thoughts in the comments!