For every art form, there’s a master of the craft, a name that instantly invites curiosity and interest in equal measure whenever a new project of theirs is announced.

For film, it’s visionaries like Quentin Tarantino or Guillermo Del Toro. For music, it’s genre-breakers like Radiohead or Beyoncé. But when it comes to comics, there’s one singular contributor that evokes similar designations of artistic merit and value, and his name is Brian K. Vaughan.

What makes Vaughan unique as a storyteller is that while many within his profession, like Tom King or Brian Michael Bendis, are known for their inventive takes on established characters, Vaughan’s best works are original narratives, often featuring ordinary people in extraordinary circumstances (well, “ordinary” in a figurative sense. After all, most of his protagonists are aliens or superheroes or mutants).

And regardless of the fantastical underpinnings of his premises, still, the LA-based writer builds his narratives around relatable conflicts like complex social dynamics, familial strife, a tumultuous marriage, or navigating political bureaucracy.

Working within an art form known for escapism while, on the other hand, also infusing it with humanity and depth isn’t easy. In fact, through his association with it, Vaughan elevates the genre. Which is why the rest of the world is finally recognizing his uniqueness as a critical voice with mass appeal–in the last year alone, Amazon has announced the supernatural coming-of-age Paper Girls as a series in development, Oscar Isaacs is producing and starring in a film treatment of his political drama Ex-Machina, and FX is pushing toward developing the dystopian feminist tome Y: The Last Man into a series, as well. 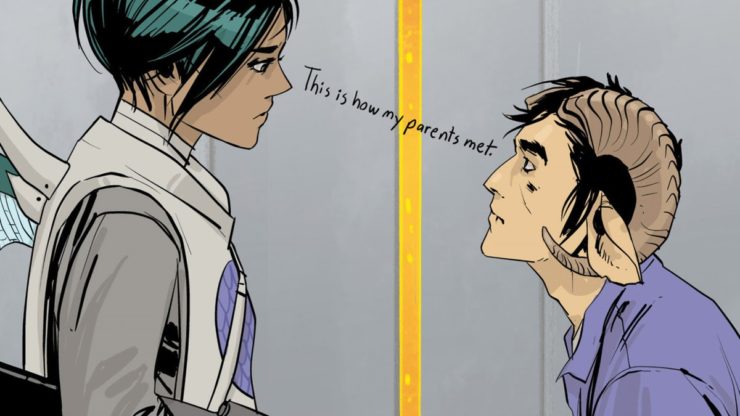 Book endorsements are generally the comic book industry’s back patting ritual with colleagues recognizing one another’s genius through a hyperbolic quote. But Brian K. Vaughan’s epic sci-fi opera Saga defies conventionality so it would make sense that his endorsements would too.

“The last great book I read was Saga,” Lin-Manuel Miranda told the New York Times. “It’s an incredible world in which to get lost.” The creator of Hamilton even took another opportunity to sing the comic’s praises on Twitter for his three million followers calling the series “a masterpiece.”

So what is it about Vaughan’s fifty-four issue run (so far) that appeals to the creator of the greatest hip-hopera of all time as well as to actress Lupita Nyong’o, who counts Saga as a top ten book? Well, for one, the references are timeless. Combining classic elements from Star Wars, Romeo and Juliet, West Side Story, Game of Thrones, and Lord of the Rings, albeit, all of it happening in space, Saga tells the tale of two lovers, Alana and Marko, from two warring factions as they fall in love, have a baby, and flee a cavalcade of pursuers, all of whom are threatened by what their union implies.

The world building is also exceptional with every character expertly and adoringly developed, especially the breakout cult favorite; a blue furred feline named the Lying Cat who only says one thing and as you may have guessed, it’s “lying.”

And while on the surface, nothing is conventional–sure, Prince Robot IV has a monitor for a head, and the child’s nanny is a disemboweled floating alien ghost–at the core of his epic tale is a family just trying to figure out how to be a family despite the chaos of the universe imploding around them. Material so vibrant and evocative, the songs practically write themselves, don’t they, Lin? 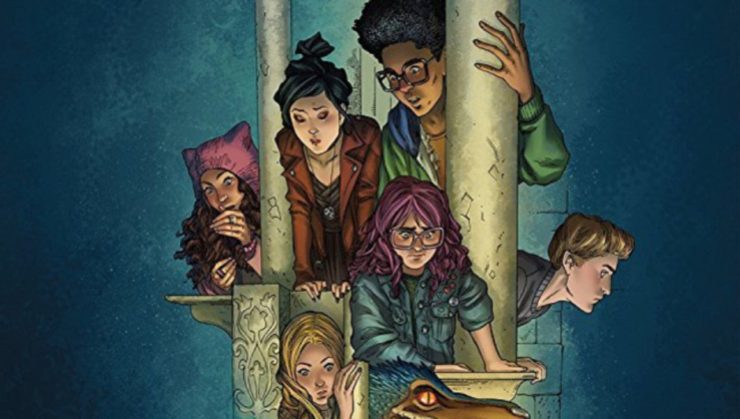 Most teenagers dread the fact that their parents are super embarrassing, but, like, how does one–insert vocal fry here–even deeeal when they find out that they’re also super villains?

The Runaways features a group of six kids who hang out once a year whenever their parents gather for a purported charity event. Unbeknownst to the pubescent lot, mom and dad actually unite as the Pride, a cabal of evil time travelers, dark wizards, mad scientists, alien invaders, ruthless mob bosses, and mind-controlling mutants who all partake in human sacrifice in an effort to appease three mythical giants named the Gibborim. Which, come to think of it, sounds like what all teenagers think their parents are out doing on date night.

Vaughan initially pitched this idea to Marvel in an effort to win over both young readers and manga fans which means The Runaways is intentionally less provocative and sophisticated than the rest of his boundary-pushing work. But his restraint makes it no less intriguing–there’s more than enough thrills, plot twists, and double-crossing to adapt the limited run into three seasons of compelling YA television on Hulu.

And unlike all of his other original creations, The Runaways has lived on through other writers at the helm with a talent pool as diverse as director Joss Whedon and YA novelist Rainbow Rowell.

“With all of my other books,” Vaughan told the Hollywood Reporter, “I love that the artist and I get to control them on our terms. But with Runaways, I wanted to create something that I would eventually put up for adoption.” 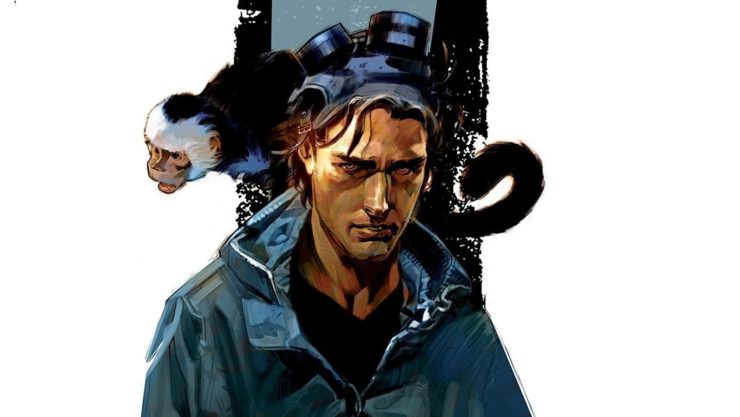 A hapless and aspiring escape artist wakes up one day to discover that he is the only man alive in a world now populated by women only, and yet he is not the hero of the story despite the title suggesting otherwise. In fact, Yorick Brown spends the entirety of the groundbreaking Y: The Last Man’s sixty issues surrounded by fierce, intelligent, and substantive women who, time and time again, have to compensate for his inconsiderate impulsivity. See, Yorick just wants to reconnect with his girlfriend on the other side of the planet, while the women in his life would prefer that he remains alive long enough to repopulate the Earth.

In retrospect, the premise doesn’t read as provocative as it did way back in 2002, especially now that we’re living in an age in which storytelling burgeons with diversity and equality. But if you think back to a post-9/11 era, when the series first premiered, an unspoken industry-wide standard of brashness and brute force permeated across newsstands, like Mark Millar’s Ultimates or Frank Miller’s Dark Knight Strikes Again. Vaughan’s treatise on feminism, on the other hand, was nuanced, considerate and sensitive while also uncompromised in generating page-turning action and adventure.

Which is why it’s baffling how out of all of Vaughan’s original works, Y: The Last Man has had the hardest time getting adapted. Especially, in today’s climate in which Vaughan has said that the series feels less apocalyptic and more like an “escapist fantasy.”

Yet over the course of the last decade, there has been a revolving door of talent and creatives attached to more than a few cinematic franchise attempts, and as of 2016, FX has been chugging along in turning the binge-worthy comic series into a binge-worthy television series. But just last month, a year after it was ordered to series, the project suffered a major setback with lead Barry Keoghan suddenly exiting the role of Yorick (this just in: actor Ben Schnetzer has now been given the role).

While it’s possible to see all these failed efforts as a looming curse, it’s also possible to consider that Y’s narrative perfection demands for all to experience it in its original form—as a comic book. 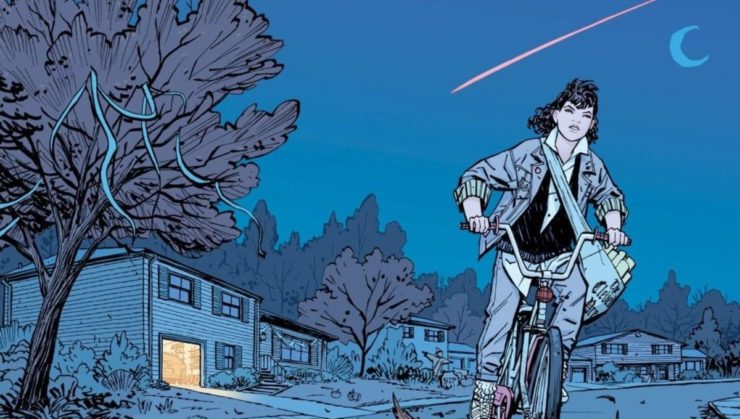 In Storytelling 101, every writer is instructed to write what they know. And so, when a forty-three year old white male decides to generate a sci-fi series featuring four female tween newspaper couriers who encounter one another on a morning paper route, it’s enough to give you pause. But then again, this is Brian K. Vaughan, and as storytellers go, he can deliver. Yes, pun intended.

“I wanted to take a chance,” Vaughan told Slate, “I’ve always enjoyed writing female characters, but sometimes it feels like even when they’re protagonists, they’re still defined with their relationship to male characters. I wanted to write about girls who could just be characters on their own, who aren’t defined by their interactions with men.”

Set in the 80’s-era suburbs, Paper Girls tells the story of a quartet of the titular pre-teens who deliver newspapers in the sleepy town of Stony Stream, a fictional town in Cleveland, Ohio, until one day they’re dragged into the middle of an ongoing war between two time travelling factions called the Old Timers and the Teenagers.

Add in time displacement, dimension hopping, battling kaiju monsters, future-self encounters, and just as many 80’s references as an episode of Stranger Things, and you’ve got a story that’s a lot to process and even occasionally disorientating and nonlinear. Which, as an adult reader, is frustrating, but also, according to Vaughan, entirely intentional.

When speaking about the narrative arc of the series, the writer insisted that confusion is all part of the plan. “We wanted to simulate how it feels to be a 12-year-old,” Vaughan added. “You’re so hyper-attuned to what’s going on in the world, but you don’t have the access to the knowledge of what’s really happening. You feel very alive, but it’s also terrifying.”

Consider the terror evocative enough for Amazon Studios which purchased the rights to Paper Girls for their very own retro-infused cult hit. 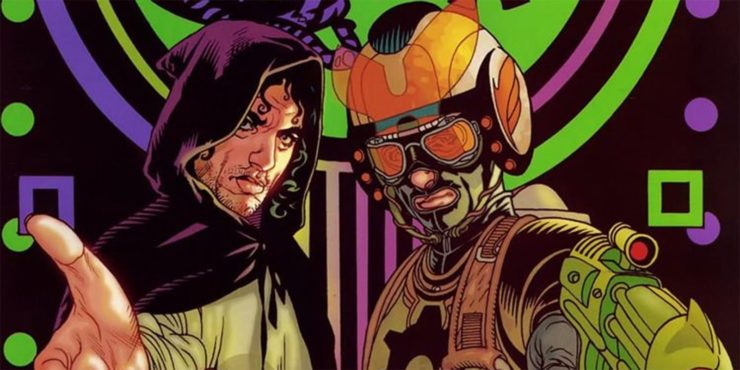 If Vaughan’s superhero/political comic Ex-Machina (not to be confused with the Alex Garland film) were reduced to one singular catchphrase, it would probably be “oh no you didn’t.”

Half-Sorkin and half-Bendis, the ongoing Wildstorm series, which premiered in 2004, always went there, unafraid to tackle capital I-issues, whether it was legalizing gay marriage, the use of ethnic slurs in art, or the irreparable ramifications of the 9/11 tragedy. And this is only the controversies that we’re faced with within the first dozen issues of the fifty-four issue run.

The Eisner Award-winning series revolves around Mitchell Hundred, the mayor of New York, who, prior to hizzoner status, was the world’s first and only superhero with the power to communicate with machines and control them. Sorta like a next level IT guy. While the narrative is told out of chronological order through flashbacks, we also learn that Mitchell won the election because of his heroism during 9/11 by preventing the collapse of the second tower. It’s a surreal escapist fantasy which yet doesn’t feel gratuitous in the hands of a deft storyteller.

Ultimately, though, while Ex-Machina has many elements of a political thriller, it also allowed its creator to explore his feelings on what would make an ideal politician despite the fact that Vaughan doesn’t like to discuss politics in interviews.

“[After 9/11], There was just a rash of so-called “heroes” elected to office,” Vaughan told Publishers Weekly, “And it sort of raised the question of, just what is a hero? Is a hero something real or is a hero just something we create and impose on people.” And to Vaughan’s credit, the reader’s personal party affiliation shouldn’t matter–Ex-Machina tells the relatable tale of a man who, yes, has superpowers, but it’s his humanity that makes him a hero.

What is your favorite Brian K. Vaughan comic series? Let Your Geek Sideshow and tell us in the comments!