Behind every great woman, there is quite often a support network of equally great women, which explains why Padmé Amidala is never too far, far away from her entourage of Royal handmaidens, many of whom serve as decoys, bodyguards, political aides, and confidantes throughout the Star Wars saga.

These loyal young women often stand in the shadows, silently protecting and supporting their monarch while assisting her with everyday tasks (as well as the occasional errand that falls outside of their job description), but we believe that these brave and trusty sidekicks deserve their time in the spotlight.

So, get ready to unleash your thunderous applause, as we present to you the names and faces of Padmé Amidala’s most honorable handmaidens.

Moteé (Kristy Wright) serves the Senator in the final days of the Clone Wars. She accompanies Padmé to the Galactic Senate to listen to Chancellor Palpatine’s Declaration of a New Order, in which he proclaims himself Emperor of the galaxy and shares his vision of a Galactic Empire.

Aside from sitting behind Padmé in the Senate box, Moteé is barely present in Revenge of the Sith along with the rest of the handmaidens, who are also notably absent in the prequel trilogy-capper, perhaps suggesting a breakdown of Padmé’s female allies leading up to the end of her life.

Along with Saché, Yané (Candice Orwell) stays grounded on Naboo during the Queen’s excursion to the ecumenopolis planet of Coruscant. She plays her part in assisting the Resistance in their fight back against the droid invasion that has been incited by the Trade Federation.

Very little is known about her character, other than her backstory, which helps to shed some light on her volunteer work aiding Naboo’s orphans. Later, Yané devotes even more time to this important cause as she steps down from Padmé’s service and pursues her personal desires.

Eirtaé (Friday “Liz” Wilson) may be one of the most identifiable handmaidens of Padmé’s entourage because she has bright blonde hair and blue eyes, contrary to the rest of the staff who typically have darker features in order to bear a closer resemblance to the Queen.

Upholding the decoy deception, the guard with the golden locks is selected as one of only three handmaidens to chaperone Padmé on her mission to Coruscant. Eirtaé also proves her skills with a blaster, as she clears the path of Federation droids to make way for her highness to detain Viceroy Gunray.

Rabé (Karol Cristina da Silva) serves as one of Queen Amidala’s handmaidens during the final years of the Galactic Republic. Her primary duty is to protect and preen the monarch, as she fulfills the role of a personal stylist to Padmé on their cross-planetary missions.

Accompanying the Queen to Coruscant, Rabé is responsible for lining up a wardrobe of lavish gowns as well as a palette of make-up to create her iconic look, which features a porcelain white base with a few pops of color to accentuate the eyes and lips in a style inspired by Japanese Kabuki.

6. Dormé (Attack of the Clones)

Dormé (Rose Byrne) fills one of the largest handmaiden roles in the prequel trilogy, as she appears in several scenes throughout Episode II. She serves as a devoted aide to the Senator, who relies on her as a confidante and advisor throughout the challenges she faces during the Separatist Crisis.

Due to Dormé’s close personal bond with Padmé, the handmaiden is occasionally permitted to deal with private affairs in the Galactic Senate on behalf of the sovereign. Outside of politics, Padmé’s supportive sidekick fills a secondary role as a stylist and make-up artist, expanding upon Rabé’s past work.

5. Versé (Attack of the Clones)

Versé (Avril Wynne) is perhaps one of the most enigmatic figures in Padmé’s retinue, as her identity is veiled beneath the shadows of her hooded cloak and concealed amongst the rest of her cohorts, as she has a smaller role in Attack of the Clones compared to the others.

Her presence may be restricted to the background of a single scene but that doesn’t make Versé any less honorable as a handmaiden. While on-duty, the extremely talented slicer, or technical expert, loses her life alongside Cordé in a targeted bomb attack triggered by bounty hunter Zam Wesell. 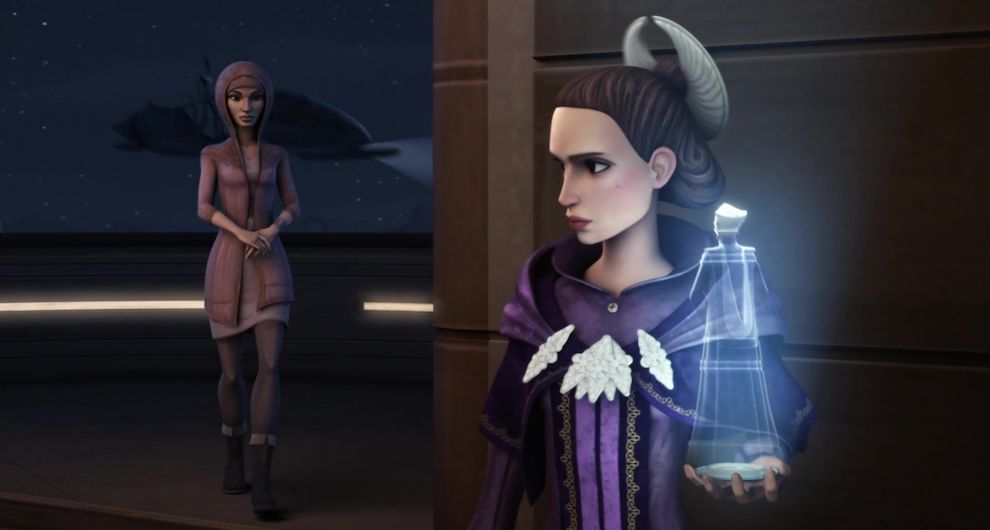 Teckla Minnau (voiced by Ashley Moynihan in The Clone Wars) is one of the only handmaidens to refuse a name ending in “é”, but her unwavering loyalty is presented through her other actions. So much so that she ends up losing her life in aid of the cause while escorting the sovereign on a mission to Scipio.

Up until this point, Teckla was kept busy in both mental and physical capacities, offering moral support to the Senator while simultaneously maintaining her intricate hairpieces. She also appeared in a brief scene in Attack of the Clones, in which she serves a dish to Padmé and Anakin at Naboo’s Lake Country retreat.

Saché (Sofia Coppola) is one of the few handmaidens who is excluded from Queen Amidala’s trip to Coruscant, but only because she has a vital role to play on Naboo. She stays behind to protect the Royal Security Forces from the Trade Federation, who ultimately capture and interrogate her.

Staying loyal to the faction, Saché refuses to name her allies in a remarkable act of bravery that is later rewarded with support, as she gains a substantial following in the political arena following Padmé’s term in office, making her an influential figure within the Naboo government.

2. Cordé (Attack of the Clones)

Cordé (Veronica Segura) serves Senator Amidala in the period preceding the Clone Wars, though her undertakings come at a tremendously high personal cost, as she ultimately dies in the line of duty while functioning as Padmé’s new decoy in replace of Sabé who is engaged in other activities.

Under this illusion, Cordé commits the ultimate act of bravery and selflessness, as she takes the role in the explicit knowledge that her life may come under threat. Tragically, in a scene at the beginning of Attack of the Clones, Cordé is targeted and killed in an explosion while disembarking the Senator’s ship.

Even though she is never referenced by name in The Phantom Menace, Sabé (Keira Knightley) is arguably one of the most notable handmaidens to serve the Queen of Naboo, as she uses her resemblance to the Empress to function as her decoy for the majority of Padmé’s scenes in Episode II.

Out of all of the handmaidens, Sabé forms a particularly close connection with Padmé, as they develop a plan to switch roles and swap identities to protect the Queen from threat amid crisis situations. Sabé assumes an elaborate disguise on several occasions, particularly during the Trade Federation invasion on Naboo.

From this loyal line-up, which handmaiden do you believe is the most deserving of a Medal of Bravery? Who would you want by your side? Let Your Geek Sideshow and tell us in the comments!