As the final film in the landmark Skywalker saga, Star Wars: The Rise of Skywalker is stuffed with more Easter eggs and references than dashing capes in Lando Calrissian’s closet, so we adjusted our lenses Maz Kanata-style to help us to identify some of our favorites from the bunch.

Pour yourself a glass of blue milk and join us in the galaxy far, far away as we take a ride through hyperspace to hunt down the greatest callbacks that are hidden within the final chapter of the 42-year-old story. Needless to say, there are spoilers ahead for Episode IX.

In The Rise of Skywalker’s opening crawl, we learn that Emperor Palpatine has transmitted a “mysterious broadcast” to the galaxy, in which he vowed to seek revenge for the attempt on his life. We don’t ever hear the audio in the movie, but if you play Fortnite, you might have heard Palp’s dulcet tones through your gaming speakers.

The broadcast was relayed during an in-game Fortnite and Star Wars crossover event, where the Sith Lord declared: “At last the work of generations is complete. The great error is corrected. The day of victory is at hand. The day of revenge. The day of the Sith!”

Have a listen to the audio from the Fortnite event below. Do it:

While on the trail of the uncharted and mysterious planet Exegol, Rey, Finn, Poe and Co. touchdown on Pasaana to see that the Aki-Aki are living their best lives at the Festival of the Ancestors, a vibrant and joyous celebration that transforms the sepia-toned landscape into a colorful hotspot.

Fortunately, everyone’s favorite factoid-droid, C-3PO, is on hand to share his encyclopedic knowledge of the occasion, which he says takes place “once every 42 years.” This is a subtle nod to the age of the Star Wars franchise and the fact that it has been 42 years since the release of A New Hope.

8. The Tragedy of Darth Plagueis the Wise

In Revenge of the Sith, Palpatine, secretly Darth Sidious, attempts to seduce Anakin Skywalker to the Dark Side by recounting the legend of Darth Plagueis the Wise, a powerful Sith Lord who apparently possessed the power to influence midichlorians to create life and prevent death.

In The Rise of Skywalker, it is implied that Palpatine had used these same methods to keep himself alive, as he tells Kylo Ren: “The Dark Side of the Force is a pathway to many abilities some consider to be unnatural” – which is a callback to a line that he delivered to Darth Vader-in-waiting in Episode III. While on board the Millennium Falcon, Chewbacca sits opposite Finn and Poe at the hologame table to play Dejarik (sometimes referred to as Holochess). It is typically a two-player game, with two teams of holographic creatures battling it out on the board, so the Wookiee flies solo against his opponents.

In A New Hope, C-3PO refereed a similar monster match between Chewbacca and R2-D2. In that film, he warned the bucket of bolts to let the Wookiee win to avoid having their arms pulled out of their sockets. In The Rise of Skywalker, however, Chewie seems to be winning on his own merits.

He either has a Dejarik handbook stuffed into his utility belt or, as Finn and Poe suggest, he is cheating at the game. Even though they both want to save face against the big walking carpet, Poe admits Chewie is probably so skilled at the game because of his age (apparently he’s 250 years young).

Rey’s quest to locate the Sith Wayfinder eventually leads her to the ruins of the second Death Star. While there, she explores the Emperor’s Throne Room, where Luke Skywalker and Darth Vader previously faced off in a duel before defeating the Empire.

The ancient Sith chamber houses a new throne, which is based upon sketches from artist Ralph McQuarrie, who pencilled the drawings while putting together ideas for the Emperor’s quarters in Return of the Jedi. Fleet-junkies across theaters probably mouthed a Han Solo-style “yahoo!” when they caught sight of the dozens of spaceships assembling to bolster the resistance in the battle over Exegol, with vessels from the Star Wars saga, the animated series’ and more showing up to pledge their support.

In this scene, the fastest hunk of junk in the galaxy is joined by Ghost from Star Wars Rebels, The Eravana from The Force Awakens, The Crucible from The Clone Wars, and The Colossus from Star Wars Resistance, amongst others, as the rag-tag Resistance armada prepares for combat.

Fan-favorite rebel pilot Wedge Antilles dons his helmet and buckles up to join the galactic group in the final showdown towards the end of The Rise of Skywalker, which turns out to be a fist-pumping moment for fans, who have not seen Denis Lawson appear in the role since the original trilogy conflicts.

Lawson first played the space ace in A New Hope, where he appeared alongside Luke Skywalker as a fellow X-Wing pilot. He simultaneously garnered the respect of the Rebel fighters and the fanbase, as he remained focused and calm during his flights, often leading the squadron to major triumph.

3. Voices of Jedi Past

During The Rise of Skywalker’s heart-pounding final conflict, Rey collapses to the floor, as she struggles to summon the strength to defeat ol’ grandpa Palpatine. Lying there, she beckons the Jedi Force Ghosts to help her. The voices of her Jedi forebears respond to the call with whispering words of encouragement.

Amid the post-battle reunions and celebrations in The Rise of Skywalker, Maz Kanata finally awards Chewbacca with a decades-overdue medal for his service in the Battle of Yavin, one of the major crusades in the Galactic Civil War, which ultimately led to the destruction of the Death Star in A New Hope.

Even though it was never presented at the official ceremony, some Star Wars fans may know that Chewie received the Medal of Bravery in the aftermath, as Marvel’s Chewbacca comic miniseries reveals that he actually gifted his reward to a young girl named Zarro, who he befriended after crash-landing on her planet.

Take a look at this touching moment from the comics book below: 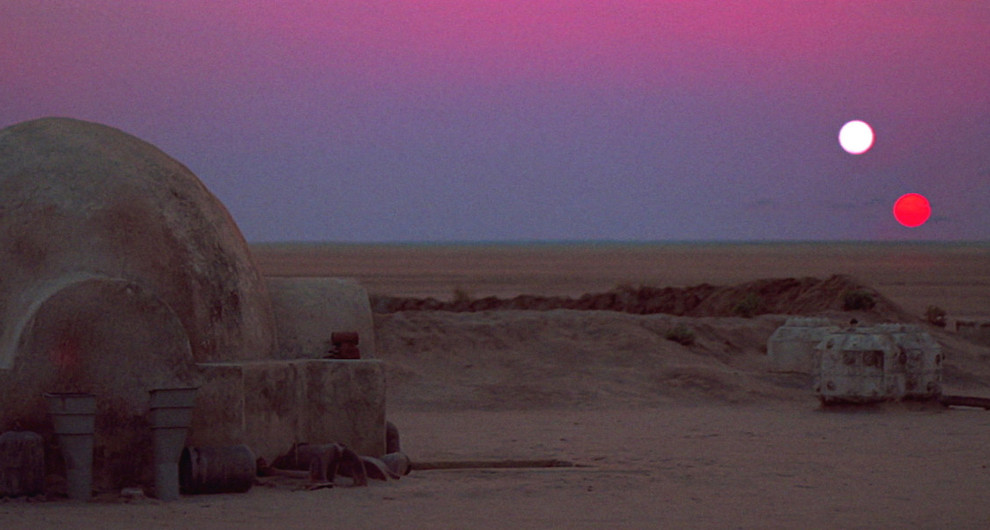 In The Rise of Skywalker’s closing moments, Rey helps to bring the story full-circle as she returns to the place where the Star Wars saga first began – out at the Lars homestead on Tatooine, which was once occupied by Luke Skywalker, his Uncle Owen and Aunt Beru.

While on the desolate desert planet, Rey buries Luke and Leia’s lightsabers in the sand. Then, moments later, their Force Ghosts appear, as she adopts the name of “Rey Skywalker.” The story concludes with a shot of Rey silhouetted against the view of the binary sunset that Luke once gazed upon.

How many of these Easter eggs and references did you spot in The Rise of Skywalker? Is there anything else that you think deserved a place on our list? Let Your Geek Sideshow and tell us in the comments!