The Emperor is dead. The Galactic Empire has crumbled, and a new Republic is born. Peace and prosperity have come to the galaxy at last.

Rising from the shadows, The First Order has taken up the mantle of the fallen Empire, and works to subjugate the galaxy under the rule of Supreme Leader Snoke. Of course, a leader must have an army – and preferably one with striking new white armor. 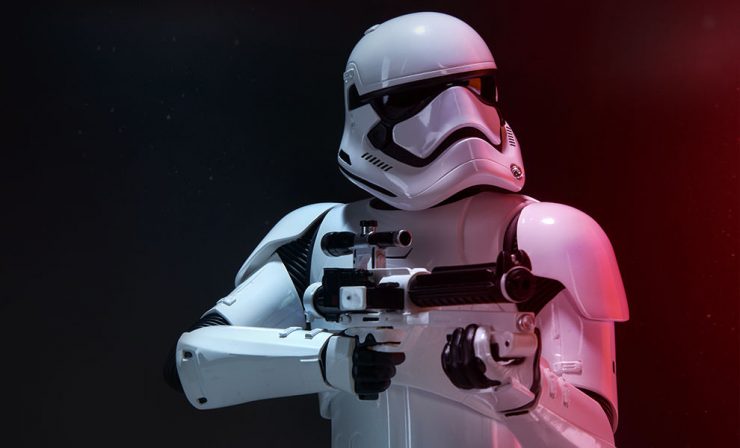 After the destruction of the second Death Star and the death of Emperor Palpatine, what remained of the once strong Empire quickly crumbled. Many imperial officers surrendered to the Rebellion, but others continued to fight for more than a year. Their last stand was at the Battle of Jakku, but this ended in a devastating defeat for the last of the imperial forces.

After the battle, the few surviving officers, loyalists, and soldiers fled to the unknown regions of space. There, they licked their wounds and gradually rebuilt a new order using the ideals of the Empire as its basis. In the decades that followed, this new army, dubbed The First Order, grew in strength, and at some point fell under the thumb of Supreme Leader Snoke.

With the Empire’s fall, there were no more Stormtrooper training academies. Without access to a reserve of common citizens recruited or forcibly conscripted into a powerful army, The First Order needed a new plan to increase their ranks. They did so by combining two previously successful techniques.

Inspired by the Clone Troopers of years past, this new breed of Stormtrooper would be raised from birth to become skilled combatants and the powerful cornerstone of the new militia. And like the Empire’s Stormtroopers, their training included constant indoctrination through propaganda and mental programing to be absolutely loyal to the First Order above all else.

Once training was complete and the soldiers reached maturity, they would be led into battle by General Armitage Hux and Captain Phasma with one singular purpose: Destroy the New Republic.

They didn’t just stop with improving the troops – armor and weaponry for the Stormtroopers also got an upgrade. The new armor, resembling both the Clone and Galactic Troopers in aesthetics, is much more durable and better able to absorb blaster fire than its previous counterparts. Captain Phasma herself once bragged that “Not even a Wookiee could destroy First Order armor.”

In addition to their standard blaster rifle, some troops are given special melee weapons for close-quarters combat. These weapons use special electrical currents that make them capable of going head-to-head with a lightsaber! Plus, just like their counterparts from eras past, certain soldiers are trained in combat for specific harsh planet environments (I.E. snow, desert, etc.) or with non-traditional Stormtrooper weaponry like flamethrowers.

So what do you think? Is the First Order here to stay?

If you missed Part One of the Evolution- Clone Troopers- click HERE!

If you missed Part Two of the Evolution- Imperial Troopers- click HERE!

How do you think their troops would fair against the Clone Army or the might of the Galactic Empire? Let Your Geek SideShow and tell us what you think in the comments below!

Be sure to check out all of our Star Wars Collectibles figures and statues!