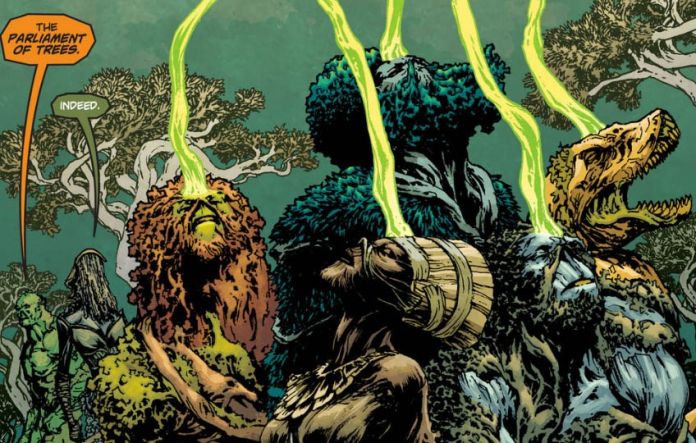 This week, we are getting our hands dirty to bring you the Top 10 Plant-Powered Comic Book Characters. Many of these heroes and villains have their roots in horror origins and strange science, but one thing is for sure- their super powers are all organic!

So, plant yourself in your seat and don’t leaf until we finish counting down these green guys and gals. Let’s get started!

Also known as Rose Red, Klara Prast is a young girl from 1907 with the power to control and talk to plants in Marvel Comics. Her name itself is a parody on “chloroplast”. When her family discovered her powers, she was married off to a man moving to America and was later encountered by the time-traveling Runaways team, brought back to the present day. Displaced from her own time, her sensibilities are a bit outdated, but she eventually acclimates to the new century.

Klara is a human mutant whose favorite plants to manipulate are roses because she believes they talk back to her. She can control the movement of plants, manipulate their growth, and has an empathic relationship with the vitality of plantlife. Sometimes, her emotions can overwhelm her control on the plants, causing them to become violent and lash out at others. 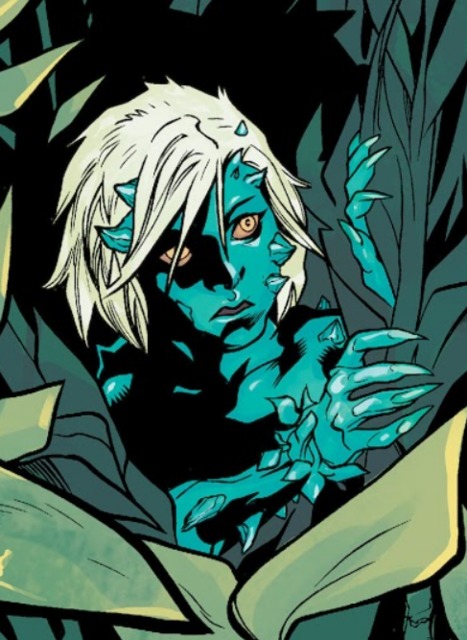 White Mercy is a plant-based life form like no other. In fact, she lives inside the collective mind of a plant called the Black Mercy. The Black Mercy is a plant that creates a dream of a person’s perfect life. In the Justice League Animated Series, it latched on to Superman and showed him his perfect life on Krypton, with his wife and two children. His parents were still alive, and Krypton was safe. When it attached to Green Lantern, he was able to save all of Coast City from destruction.

However, when it attached to the villain Mongul, he created a world where he defeated all of the heroes of the world to conquer the Universe, and even had a child—White Mercy. He used White Mercy and manipulated Poison Ivy in an attempt to actually defeat Batman, Superman, and Wonder Woman in the real world, but White Mercy saw the pain in the heroes, and chose to help them. She is able to possess other forms and manipulate their dreams.

Samuel Smithers is a chlorokinetic villain from Marvel Comics, laughed out of the scientific community for trying to develop a device capable of communicating with plants. When a lightning bolt struck his Vege-ray device, it imbued it with the power to control and animate plant life. Plantman then tried to take revenge on the Human Torch and Iron Man.

In the Iron Fist comics, it was revealed that Plantman was given this gift from the H’ylthri, plant creatures from the mystical city of K’un-Lun. Plantman is famous for creating plant matter “simuloid” duplicates of himself to commit crimes and do mercenary work for cash. He has also been a member of the Thunderbolts team, a group of semi-reformed villains doing dangerous missions, and has been imprisoned by SHIELD on numerous occasions. The newest iteration of Plantman, a man named Paul, is also made of plants.

There’s a side of Mantis that we don’t entirely get to see in the MCU, but it’s hinted at when she helps control Ego, the living planet. She is surprisingly connected to plant life. Mantis is an empath who can understand and even control the emotions of people around her, whether she’s getting Ego or Thanos to fall asleep, or even using telepathy.

But when it comes to plants, her powers practically double. She is able to travel through space by transferring her mind to plants anywhere in the universe. When she arrives, she can change the plant growth to make an entirely new functional body to fit her needs. Not only that, but even if she is killed, she can be born again in a new plant body. In some versions of her story, Mantis can control nearby plants through her unique plant-telepathy.

Floronic Man is also known as the Plant Master, the Seeder, and Floro. In actuality, he is Dr. Jason Woodrue, originally an exile from a planet of dryads who was later reimagined as a world-class botanist who taught notable DC Comics characters like Alec Holland and Pamela Isley. His humanoid body is mostly plant-based, and he is able to control and manipulate plant life, as well as physically merge with plants.

He has been a villain against the likes of The Atom, the Flash, and Green Lantern, later joining the Secret Society of Super-Villains to combat the Justice League. Woodrue is the one who uncovers the truth about Swamp Thing being an intelligent mass of plants that absorbed the memories of Alec Holland. Floronic Man has a connection to the Green, a mystical force binding all plant life in the DC Universe, and once tried to drive humanity to extinction by overwhelming all life with too much oxygen before Swamp Thing forced him to realize that plants need animals to survive. 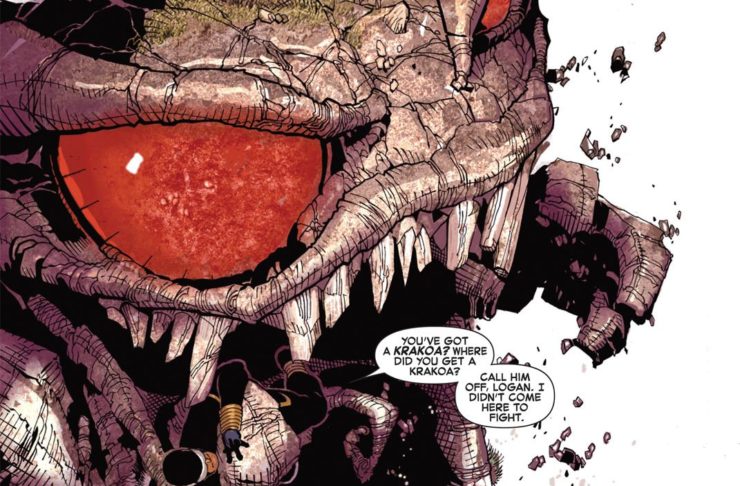 Krakoa is slightly different than most of the characters on this list because he is an entire island. He’s not just the land, or even the plants on top of the island. He is a hive mind that can create humoid and animal-like life forms to walk around and communicate with inhabitants. Krakoa is alive and even feeds off of mutant powers.

Jonathan Hickman’s new House of X series, Professor X decided to create a nation of mutants, interestingly enough, on Krakoa. It hasn’t been revealed why, but there are a few theories. Number one, Krakoa controls plant life and growth, and the X-Men are using plants to secure their power in the world. Krakoa likely benefits from the plan as well. Another theory relates to one of Krakoa’s lesser known powers: telepathy inhibition. He can block telepathic communication from leaving or entering his ecosystem. We’ll certainly learn more about the mutant nation of Krakoa in the comic books to come.

Pamela Lillian Isley, also known as Poison Ivy, was originally introduced in Batman comics as a botanist named Lillian Rose who survived a poisoning attempt and became immune to all toxins and diseases. Neil Gaiman rewrote her origin as a part of the massive Crisis on Infinite Earths retcon, giving us the version of Poison Ivy that we all know and love today. Dr. Pamela Lillian Isley studied botanical biochemistry under Dr. Jason Woodrue, who injected her with toxin as an experiment, driving her mad and transforming her.

Poison Ivy considers herself an “eco-terrorist of global importance” and is known for her crimes against humanity with regards to the survival of plant life. She has a superhuman immune system but herself is poisonous to the touch. In some iterations, she breathes carbon dioxide and has aloe blood and chlorophyll skin, making her more plant than human. She can also control all forms of plant life on a molecular level and was recently reborn in Heroes in Crisis was a potential new Avatar of the Green. 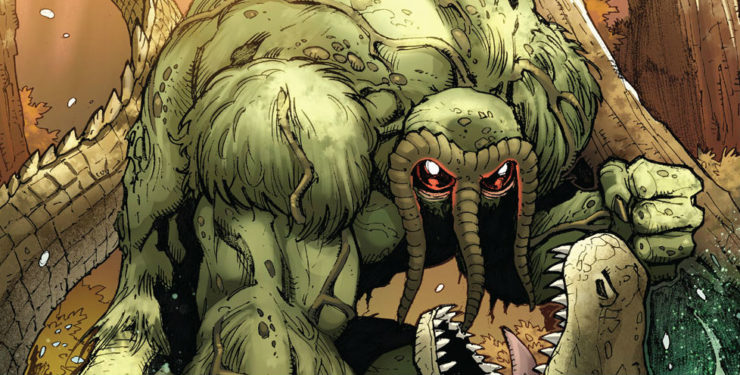 Dr. Ted Sallis was once just a biochemistry professor when he was recruited by the United States government to make a second Super Soldier serum. The serum had failed countless times before, and his should have failed too, but he crashed his car into a magical swamp that saved him and transformed him into the Man-Thing, full of nature’s mighty powers.

He’s made of swamp, and he can regenerate from any swamp. He’s practically immortal and can resist nearly all types of physical damage. Since he became Man-Thing, Ted Sallis’ neural pathways spread all throughout his body, changing his intelligence completely. He no longer thinks as a human, but as nature. Something about the change also gave him the incredible ability of an empath. He is able to understand and perceive the emotions around him. If someone acts with anger, he naturally secretes a corrosive acid to protect himself. Man-Thing packs quite the plant punch.

2) Swamp Thing (and the Parliament of Trees)

Swamp Thing is a shambling elemental creature connected to the Green in the DC Universe. Created by Len Wein and Bernie Wrightson, he first appeared in House of Secrets in July 1971, two months after Marvel’s Man-Thing debuted. Thought to be the mutated form of scientist Alec Holland, it was revealed that Swamp Thing was actually a sentient mass of plant matter that had absorbed Holland’s memories and personality.

He has been rendered in live-action several times, most recently in a 1-season series on DC Universe. Swamp Thing is chlorokinetic and can easily regrow himself whenever damaged. He can also transport his consciousness into plants across the world- he once regenerated himself out of tobacco that John Constantine was carrying. He is immensely powerful and the upper limits of his strength have yet to be established.

With Swamp Thing, the Parliament of Trees serve as a council of elemental beings that serve the Green as protectors of plant life- among their numbers are also Eyam, Swamp Knucker, Bog Venus, Ghost Hiding in the Rushes, and more. They secretly had an agenda to remake the earth and destroy mankind, but Swamp Thing refused and protected humanity, and the Parliament was punished accordingly. 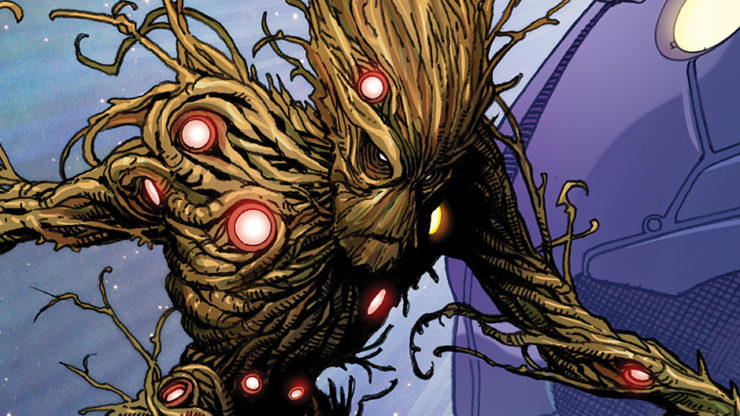 Groot hails from Planet X, the capital of branch worlds. He is an alien known as a Flora Colossus. Their language, like their skin, is as rigid as bark. Due to their rigid internal organs, it seems they can only repeat the phrase, “I am Groot.” However, some heroes like Rocket Racoon and Thor are able to understand him, whether from practice or from an Asgardian language class. Despite the language barrier, Groot is hyper-intelligent and creative with all of his powers.

Groot can control all trees and plants and regenerate his own plant skin in any formation or density. He can create shields and vines to defend himself or others, on top of already being super strong and durable. With this regeneration ability, he can make any plant grow at high speeds, entangling foes in his grip, poisoning them, or even creating bioluminescent plant life on his own body. Groot is a light in the dark galaxy and can bring life where there was none.

So, did we cultivate a strong, growing list? Or did we forget to water this one? If we missed someone that you think should be on the list, be sure to send us your opinions.