Marvel’s newest edition of Voices: Comunidades #1 is now out, celebrating Latinx characters and their stories. Last year’s Comunidades showed Eva Quintero joining Germán Aguilar at Strange Academy, Nina the Conjuror fighting for Earth, Risque navigating new worlds, and it pulled Reptil back into the spotlight (among others!). This year included familiar favorites like Miles Morales, America Chavez, and Nova as well as a new figure named Chimera.

Right now is an exciting time for Latinx representation. Rictor and his boyfriend Shatterstar are at the frontlines of Otherworld. Sunspot just threw the New Mutants a 40th anniversary party. Over in the MCU, we’ll soon have Gael García Bernal as Werewolf by Night. Plus, Black Panther: Wakanda Forever has reimagined Namor’s civilization with Mesoamerican-Indigenous influences, to be called Talokan. Tenoch Huerta will play Namor, Mabel Cadena will be Namora, and Alex Livinalli will be Attuma. Also, She-Hulk just introduced El Águila, a low-level villain who happens to be a bioelectrical mutant in the comics!

Since 1975, Latinx characters have impacted many Marvel storylines. Some characters introduced us to completely novel concepts and others survived experiences that mirror the hardships of our own world. Here are some of the most influential Latinx figures in Marvel Comics.

Unfortunately, his real identity was compromised. Hector gave up being the White Tiger — though his family would still be murdered later by a criminal with a vendetta against super heroes. Eventually, Hector’s niece, Angela del Toro, and his sister, Ava, both came into possession of the White Tiger amulets.

Ava and Angela followed very different paths into the world of super heroes. Angela became involved with Daredevil and the Hand (and was nearly consumed by a ruthless thirst for power). Currently, Ava channels the divine aspects of the White Tiger power as she fights with various Avengers teams — though she struggles with confidence in herself. Recently, Ava crossed paths with Chimera. It’s unclear is she’s a friend or foe but she definitely packs a punch. Her name (and story in Comunidades) suggests that she received nefarious enhancements to be so powerful. 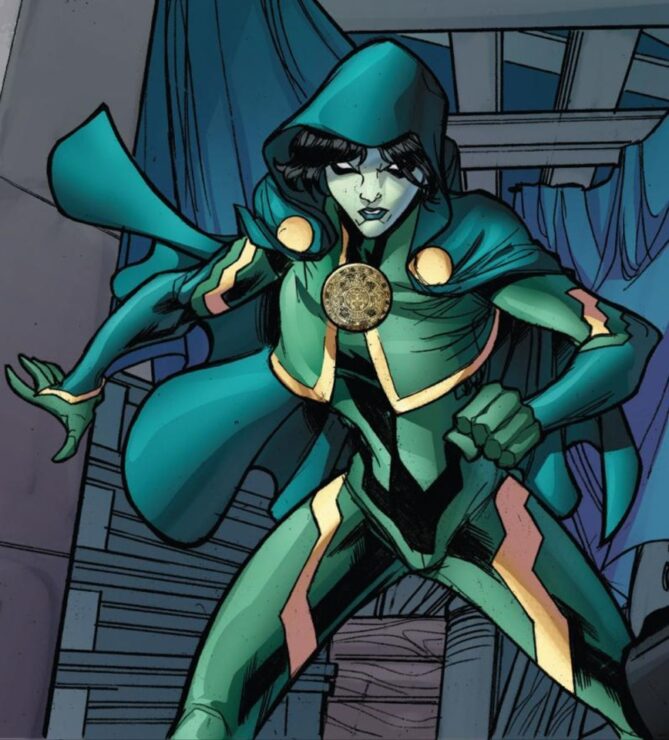 Huitzilopochtli is the god of war within the Aztec pantheon. He was immensely powerful and his Mexica followers were said to be reincarnated as hummingbirds. Translated from Nahuatl, his name roughly means “Reincarnated Warrior God from the South.” According to the High Evolutionary. Aracely is the reincarnation of Huitzilopochitl.

Aracely has many powers, like her Nahuatl counterpart. She can manipulate fire and emotions, she flies, and she is also a formidable telepath (with abilities similar to Madame Web). Scarlet Spider saved her from traffickers and since then Hummingbird has been part of the New Warriors.

Shark-Girl is a mutant from Recife, Brazil. Lately she’s been seen in various Krakoan comics but Shark-Girl, also known as Iara Dos Santos, first appeared during Jason Aaron’s run with the X-Men. She was part of the first class of mutants at the Jean Grey School for Higher Learning, led by Wolverine. Iara is from Brazil and her mutation allows her all the abilities of a formidable shark — and she’s got the bite to back it up. Even Namor learns to respect her! 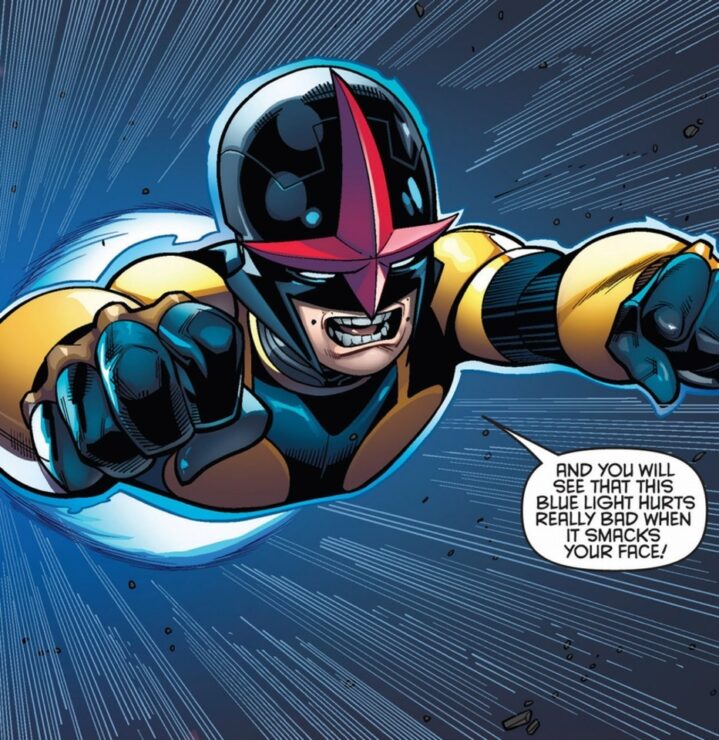 Nova first appeared during the war between the Avengers and the X-Men. Sam Alexander, AKA Nova, is a member of the Nova Corps. Using his helmet, Sam can fly at incredible speeds through space. He can also wield immense levels of energy.

The Nova Corps is an intergalactic peacekeeping force. His father, Jesse Alexander, was a former Nova Centurion. Sam strives to follow in his heroic footsteps while fighting alongside the Avengers and the Champions with Ms. Marvel, Riri Williams, and Miles Morales. 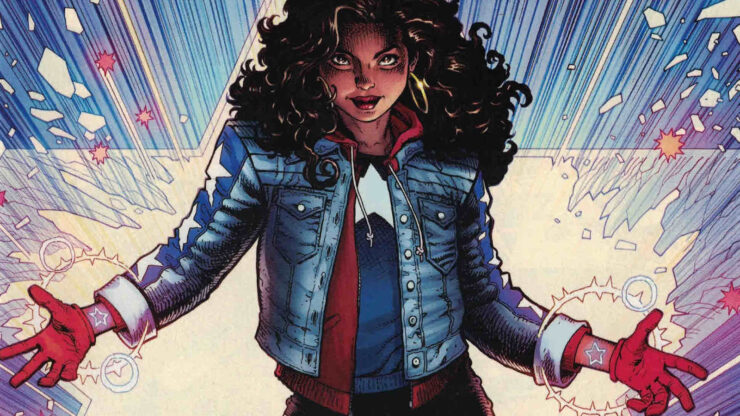 America Chavez hails from the Utopian Parallel, a paradise dimension beyond the constraints of the multiverse and created by the Demiurge — or wait, is that just a coping mechanism to deal with being forcibly separated from her moms and younger sister after experimental genetic treatments? Either way, America’s world is one in which she defies the patriarchy and fights for justice on her own terms.

Her powers not only grant her flight, speed, strength, and invulnerability, but she can also construct star portals for interdimensional travel across the Multiverse. America is a leader wherever she goes, first serving with the Teen Brigade, then the Young Avengers and most recently the Ultimates. With the Young Avengers, America kept a close eye on Kid Loki while forming tight bonds with her other teammates like Kate Bishop, Wiccan, Hulkling, and Noh-Varr (AKA Marvel Boy). When she’s not putting stars in enemies’ eyes, America keeps close tabs on her adopted Puerto Rican family in Washington Heights.

In Doctor Strange in the Multiverse of Madness, America made her MCU debut. She’s played by Xochitl Gomez and must contend with Scarlet Witch’s dark plans to manipulate the Multiverse. Over in the comics, America is dealing with her Edges Syndrome as it slowly diminishes her power.

Growing up in East Los Angeles, Robbie Reyes just wanted to avoid the gangs in his neighborhood and look out for his little brother, Gabe. In order to move to a new place, he enters a street race for some money — without knowing that the car he drives is possessed by an evil spirit. Soon Robbie becomes the new Ghost Rider, as the vengeful spirit Eli guides him and grants him the same infernal powers as the Ghost Riders before him.

Eventually it’s revealed that Eli is actually Robbie’s uncle who was a serial killer (and not actually a Spirit of Vengeance). With the help of Johnny Blaze, Robbie overcomes Eli’s influence and Robbie becomes a valued member of the Avengers. He does battle alongside She-Hulk against a Dark Celestial and even charges an Avengers Quinjet with his hellish power. Robbie Reyes also appears in Marvel’s Agents of S.H.I.E.L.D., portrayed by actor Gabriel Luna. 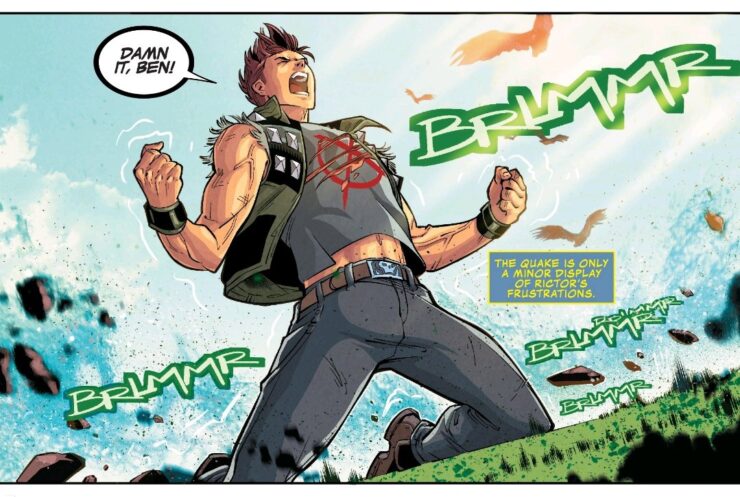 Julio’s early life was filled with crime and loss. His family ran an arms-dealing syndicate and during a deal gone awry, Stryfe murdered Julio’s father. When his mutant powers manifested, Julio’s lack of control caused the decimation of multiple city blocks. It also caught the attention of an extremist anti-mutant organization.

After being saved by X-Factor, Julio joined the team as Rictor. In addition to manipulating seismic energy, Rictor’s powers give him a geokinetic connection to the Earth. Over time, Rictor developed control of plant life, magma, and earth itself. Later, Rictor would join other teams such as the X-Terminators, the New Mutants, Excalibur, and X-Force. With X-Force, Rictor met Shatterstar and they fell in love. In 2009 they would share the first kiss between two mainstream male super heroes to be featured in a Marvel comic panel. Now, on Krakoa, Rictor has learned magic from Apocalypse and is a leading hero in Knights of X. 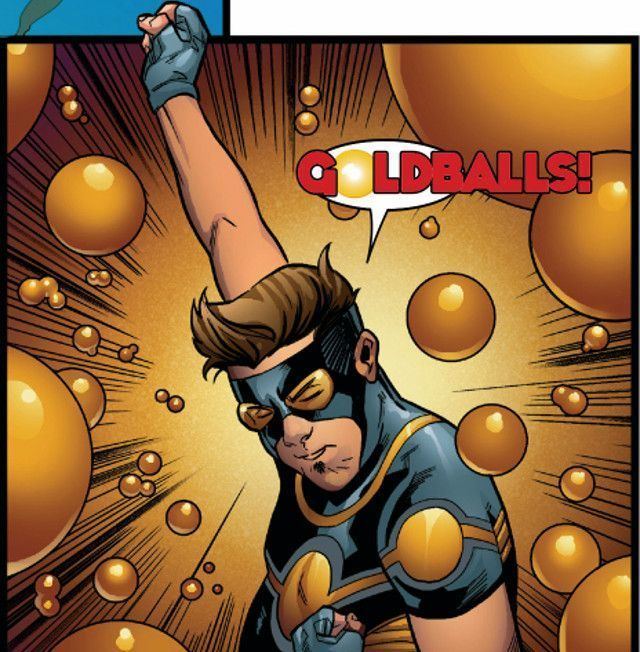 Like many before him, Fabio was reluctant to join the world of super heroes. Plus, he entered at a rough point in X-Men history. The mutant team had just concluded their war against the Avengers. Suddenly Fabio and his teammates were swept by Dormammu into Limbo. He left the team after that episode but disastrously lost control of his powers. Fortunately he was rescued by Cyclops’ X-Men.

Fabio learned to appreciate his sphere-generating mutation when he defeated the Blockbuster Sentinel. This was also when he coined his catchphrase/codename “GOLDBALLS!” Later, his codename would switch to Egg when the true nature of his abilities was discovered on Krakoa. His golden spheres are actually organic, infertile eggs that became part of the resurrection process carried out by The Five, enabling key mutants to return from the dead. 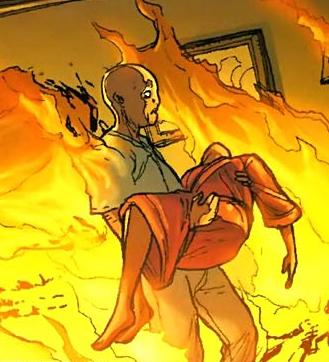 Few mutations are as versatile as Darwin’s abilities. True to his name, Darwin can adapt for survival. In battle, that means he can quickly react to blasts and attacks. Even Hela’s infernal touch didn’t kill him. It’s theorized that Darwin might actually be immortal thanks to his mutation.

Armando was also part of the disastrous mission to save the original X-Men team, alongside Gabriel Summers, AKA Vulcan. Since then, Darwin has become a valued addition to the team. On Krakoa, he even lasted 200 years in the time-displaced Vault with Synch and Laura Kinney.

After getting mixed up in a centuries-old dispute between two mysterious societies, Anya is injured and must be saved by a mystical spell. From that spell, she also receives a spider tattoo. This tattoo soon grants her a powerful exoskeleton and she begins working for the Spider-Society to hunt down the Sisterhood of the Wasp as a hero named Araña.

Over time, Araña loses her spider tattoo and must work as a hero without powers. She informally trains alongside Carol Danvers before gradually regaining her superhuman spider physiology. She also inherits a new suit from Julia Carpenter (the new Madame Web) and is given the name Spider-Girl by Jessica Drew (Spider-Woman). Sadly, her father is killed during an accident with the Red Hulk, and Anya must take down a covert terrorist organization. Most recently, she has been working closely with Natasha Romanoff, Yelena Belova, and Kate Bishop. 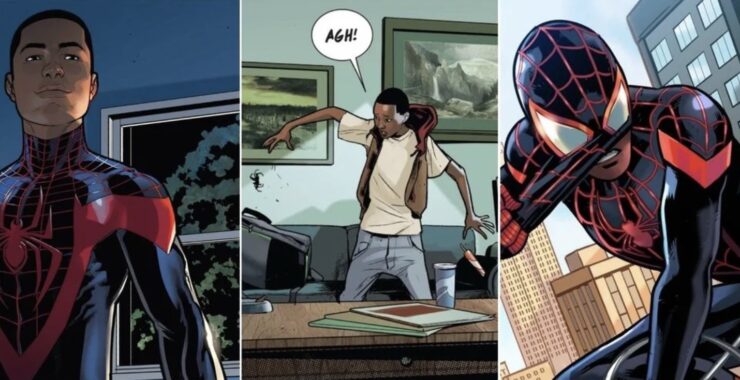 Miles Morales is one of the more well known Latinx characters of the MCU and Marvel comics. In the comics, after he’s bitten by an enhanced spider that escapes from his uncle’s bag, he avoids any heroics until the death of Peter Parker compels him to become Spider-Man. Despite his young age, Miles proves to be more than worthy of continuing the wall-crawling legacy.

The biggest impact of this Afro-Latino hero actually comes from his big screen debut in Spider-Man: Into the Spider-Verse. Though the concept of shared universes and crossover dimensions was far from new to seasoned comic book readers, this Miles Morales-fronted film helped bring the word “multiverse” into the common language of MCU audiences. The tangly web of plots helped establish familiarity so that we were ready to embrace the inevitable chaos of the Multiverse. Miles will return, alongside fellow Latino Miguel O’Hara (AKA Spider-Man 2099), in next year’s Spider-Man: Across the Spider-Verse.

Soon, that onscreen representation will continue to diversify in Black Panther: Wakanda Forever, as well as other MCU projects and ongoing comics. Representation will always be a vital mission in super hero media because everyone deserves to see themselves reflected in their heroes.

Who are your favorite Latinx Marvel characters? Connect with other Marvel fans in our Local Comics Society Facebook Group, and don’t forget to Let Your Geek Sideshow!