As the Marvel Cinematic Universe’s first couple, Tony Stark and Pepper Potts have had plenty of memorable moments. Both appeared for the first time in Iron Man, and their shared history ranges from dramatic to comedic to romantic. A study in opposites attracting, Tony and Pepper are perfect counterbalances to one another.

Here are the top 10 moments that prove Tony and Pepper are perfect partners.

In spite of his choice to shift away from weapons manufacturing, Tony suspects that Obadiah Stane may be continuing to deal weapons behind his back. Well aware of the fact that he cannot slip into Obadiah’s office unnoticed, Tony asks Pepper to acquire recent shipping manifests so he can stop the weapons he created from hurting anyone else. In spite of her hesitance and concern about the path Tony is taking, Pepper can tell that this matters to him and she retrieves the files for him. Pepper is often there for Tony with words of caution, but when something really matters to him, she finds a way to support him in his endeavors.

Iron Man 2 finds Tony grappling with the implications and fame of his newfound role as Iron Man and, in a moment of reckless hubris, he decides to drive the Stark Industries race car on the historic Monaco Grand Prix racing circuit. Anton Vanko, also known as Whiplash, confronts Tony, wielding his deadly electrified whips. Seeing Tony in imminent danger, Pepper jumps into a car with Happy to deliver the Mark V suitcase to Tony. Although she is usually level headed and anything but impulsive, when she sees that Tony is in trouble, she jumps into action without hesitation or concern for her own safety. 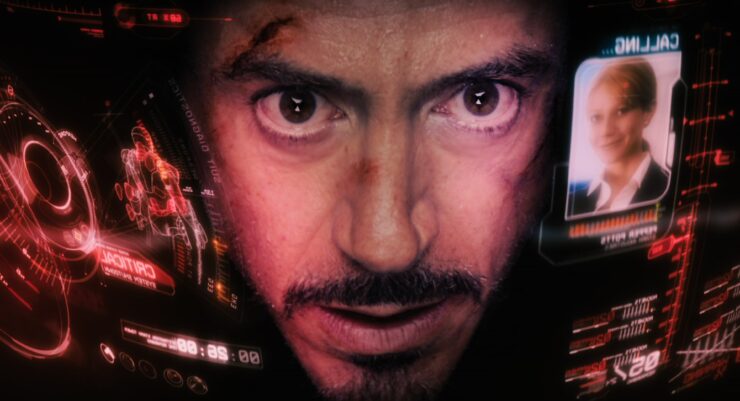 As Tony redirects the missile launched at New York City toward the portal in space, Steve Rogers warns him that it is a “one-way trip.” Tony recognizes the gravity of his decision, and J.A.R.V.I.S., his A.I. system that knows him possibly better than almost any human, asks Tony if he should try to call Pepper. Tony says, “Might as well,” and attempts to connect with Pepper before going through the portal. In what he believes to be his final moment, the only person he was thinking about saying goodbye to was Pepper.

Tony struggles with panic attacks and flashbacks related to his near-death experience in the Battle of New York and turns to tinkering with new armors instead of truly dealing with his trauma. This is a point of contention for Tony and Pepper, threatening their relationship with one another. After thinking that he had lost Pepper and with Aldrich Killian and his Extremis soldiers defeated, Tony initiates the Clean Slate Protocol. With this promise, Tony destroys all of the suits that had served as distractions from what really mattered in his life. As the suits are obliterated in a brilliant firework display, he and Pepper embrace.

Tony calls Pepper into his workshop to help replace his failing arc reactor with a new, upgraded one. Tony and Pepper take turns having moments of panic and making attempts at reassurance throughout the process, but together they are ultimately successful. Pepper, relieved, tells Tony to never ask her to do something like that again, and Tony replies, “I don’t have anyone but you.” Tony, who so often only allows his charisma and independent side to take center stage, is not afraid to be vulnerable with Pepper. In turn, Pepper, who even at this point so early in her MCU tenure clearly does not like dealing with the unknown, dives in to help Tony when he asks.

In an on-brand moment of pride, Tony challenges the Mandarin through a reporter, providing his home address in the process. His reckless decision leads to a heated argument between Pepper and Tony regarding much of his behavior since the Battle of New York. Maya Hansen interrupts their bickering to point out a missile rocketing toward Tony’s beachside home on television. As the rocket makes contact and the three are launched backwards from the impact, Tony summons his latest armor, the Mark XLII, and directs the armor onto Pepper instead of himself. As the ceiling begins to crumble, a fully armored Pepper hovers over Tony and blocks the rubble from hitting him. In the midst of a disagreement and under attack, Tony and Pepper can still count on each other to put the other first.

Having captured Pepper Potts, Aldrich Killian subjects her to the painful and grueling gene alteration known as Extremis aboard an oil-drilling platform. Tony is interrupted from freeing Pepper by Killian and the continued attack from his Extremis-enhanced soldiers. Before Tony can save Pepper, she falls 200 feet to a raging fire below. Tony is bereft, but continues to defend himself against Killian’s attacks. Killian tells Tony that Tony never deserved Pepper, and that he himself had come close to making Pepper perfect. Tony agrees that he probably did not deserve Pepper. He disagrees, however, with Killian’s assertion that he had come close to perfecting her, telling him, “She was already perfect.” In spite of his almost compulsive need to tinker and improve, Tony recognized that Pepper was perhaps the one person and aspect of his life that did not require fixing.

After spending a large portion of the movie at odds with one another, Tony and Pepper find themselves together on a rooftop following the final battle against Whiplash and the Hammer Industries drones that he controlled. Overwhelmed at all of the recent chaos, Pepper tells Tony that she is done and to her surprise, Tony agrees, telling her that she deserves better. He tells her, “You’ve taken such good care of me. I’ve been in a tough spot and you got me through it, so … right?” Pepper softens as Tony reflects on everything that he has put her through, and as they begin to discuss details of how to clean up the literal and figurative mess Stark Industries has created, they passionately kiss. Tony asks Pepper if it was weird, and she assures him it wasn’t. He tells her to “run that by” him again, and they kiss once more. No matter what, Tony and Pepper always find their way back to one another.

Five years following the tragic events of Avengers: Infinity War, Tony and Pepper reflect on how lucky they were as a family to escape the destruction of Thanos. With a beautiful home, a simple life together, and their adorable daughter Morgan, they have a lot to be grateful for. After a plea from Steve, Natasha, and Scott, Tony tells Pepper that he managed to figure out time travel, and immediately offers to “put a pin in it” and just go to bed. Pepper in turn recognizes that asking him to do so would not only be potentially futile, but also unfair. She asks Tony, “But would you be able to rest?” Their growth as individuals and a couple are undeniable; they not only can see what matters to the other person, but they honor it. They’re willing to sacrifice something significant for the sake of the other. In his offer to throw his time travel discovery in the lake, Tony offers up his overwhelming drive to fix things and see even dangerous endeavors through. In her questioning whether or not he would actually be able to rest, Pepper lets go of the stability and safety they had built and that they both had come to cherish, knowing that peace for Tony usually has a cost.

Having succeeded in their time heist and snapping those that had been lost in Avengers: Infinity War back into existence, the small band of remaining Avengers find themselves with significant backup as their allies appear through portals on the battlefield. Pepper, suited up in her striking Rescue Armor, fights alongside Tony and the other Avengers. Tony and Pepper’s love story, however, comes to a bittersweet ending after Tony successfully snaps Thanos and his army out of existence. Pepper finds Tony fatally wounded amidst the wreckage. Knowing that they were about to part ways for good this time, both Tony and Pepper try to comfort one another. In spite of his devastating injuries, Tony is able to whisper, “Hey, Pep,” spare her a smile, and place his hand over hers on his chest. Pepper assures Tony that she and Morgan will be okay, and tells Tony, “You can rest now,” harkening back to their initial conversation regarding time travel. She knew he would not be able to truly rest until he had seen his mission through and saved the world.

In the Marvel Cinematic Universe, high-tech suits, superpowered allies and enemies, and space and time travel require a certain suspension of disbelief. Tony and Pepper’s love story, however, remains one of the most grounded, believable, and endearing aspects of the entire Infinity Saga. The two have their ups and downs as a couple, but their enduring love and respect for one another helps them come back together time and again.

Their differences, once a frequent point of contention, become a foundational strength for Tony and Pepper as individuals and as partners. Through accepting, honoring, and loving one another exactly as they are, Tony and Pepper are able to experience a beautiful life together and become the very best versions of themselves.