Watching WandaVision on Disney+? Here’s What Marvel Comics to Read Next

The third episode of Marvel Studios’ WandaVision has dropped on Disney+ and while so many details about the series are still a mystery to fans, there are some comic book titles viewers can look towards to see where the show has pulled some of its inspiration.

The history between Scarlet Witch and the Vision is a long and complicated one, and is not without its fair share of chaos magic, alternate realities, forced suburban happiness, and more. Sound familiar? Sound suspicious? You’d be absolutely right.

Here are five essential graphic novels to read if you’re looking to dive into the weird and wondrous reality that is WandaVision: 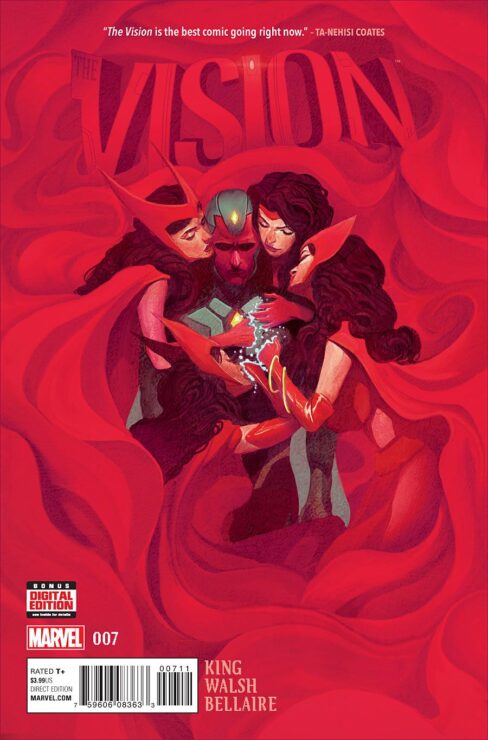 Why Read This?: The Vision series is the surreal and tragic story of Vision moving to suburbia with his own robotic family- a wife and two kids he built himself- in an attempt to achieve domestic bliss. This book will help you get into the uncanny vibes of Westview in the series.

The Vision is a masterpiece comic book, told in 12 parts like a true Shakespearean tragedy (the two arcs take their names from Shakespeare’s The Merchant of Venice, to further drive the connection). Can a family of androids blend in seamlessly with their neighbors in a picturesque Virginia town? Well, once the murders begin, hiding in plain sight gets difficult.

The Vision series explores the android’s struggle for happiness and normalcy, as well as flashing back to Wanda’s role in his life leading to this latest chapter. It is not the typical super hero story, focusing more on domestic drama, psychological thrills, and a good old dose of what it means to be human. If you read nothing else, The Vision is a must in order to brace yourself for the insanity of WandaVision. 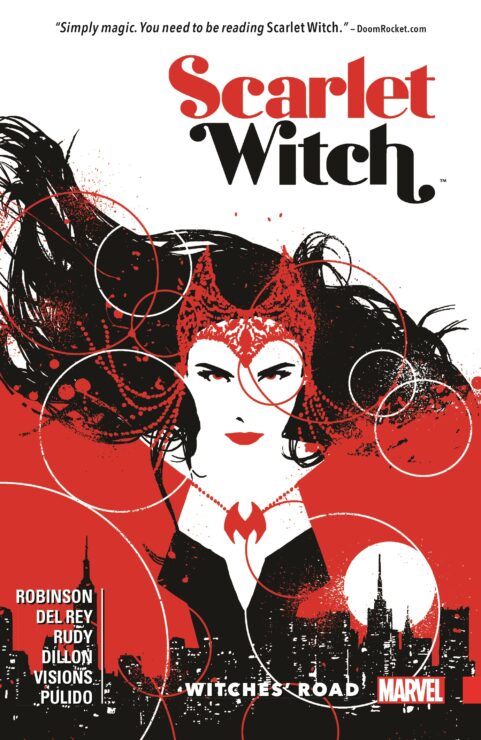 Why Read This?: Released alongside The Vision, but not crossing over, this series puts the focus on Wanda Maximoff and her intense magical abilities. This series should also give you a better understanding of the name Agatha Harkness, who has no doubt been the center of countless fan theories about the Disney+ show.

Witches’ Road teams Wanda and Agatha, an ancient witch of great arcane power, as the underlying magic in the Marvel universe is compromised. This story is visually stunning and shows Wanda leading her own title, which is rare throughout the years. It also focuses more on the eldritch and arcane than typical super hero fare, once again giving fans a uniquely formatted adventure that suits the heroine’s own unusual existence.

While Wanda’s full powers have yet to truly be explained in the Marvel Cinematic Universe, it’s clear that they are far more mystical than the heroes like Thor, Iron Man, and even possibly Doctor Strange. While it’s unclear how much stories like Witches’ Road will influence the streaming series, this adventure will help fans recontextualize Scarlet Witch as less of a traditional Avenger and more of a powerful mage. 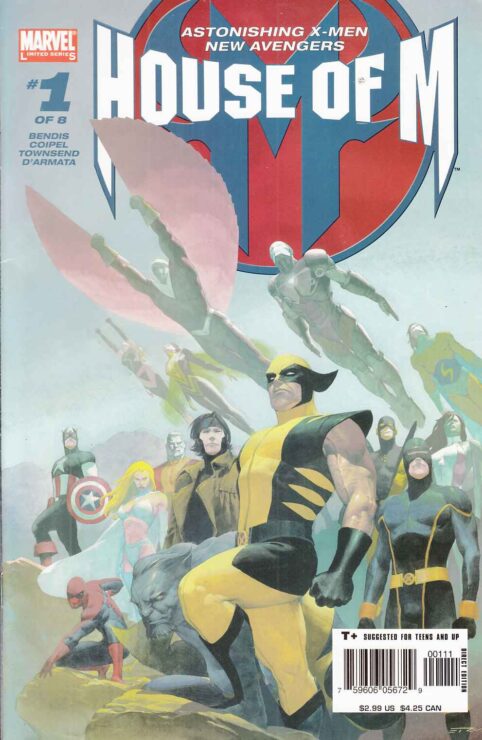 Why Read This?: Oh, the M word! If you’re looking for one of the most infamous Scarlet Witch stories about reality-warping and her destruction of mutantkind, House of M is the way to go. (Don’t mistake this for the Secret Wars: House of M miniseries from 2015- you want the original 8 issue event.)

Eagle-eyed fans noticed a House of M Easter egg in the first episode of WandaVision, with the label on a bottle of wine roughly translating to “House of Misery,” or maybe closer still- House of M. In this famous series, the Avengers and X-Men can no longer contend with the strength of Wanda’s chaos magic, which can rewrite reality. Wolverine suggests killing the Scarlet Witch, but before this can happen, she alters reality to make mutants the superior species.

While many heroes enjoy this altered world state- in which Magneto and his children rule as the House of Magnus- it is eventually revealed to be a fake reality, and the Avengers and some X-Men launch a resistance effort that kills Quicksilver, Wanda’s twin brother, in the process.

In her rage and grief, Wanda utters the famous phrase, “No more mutants.” and immediately depowers the majority of Earth’s mutant population, decimating the X-Men and forever making her an enemy of mutantkind. 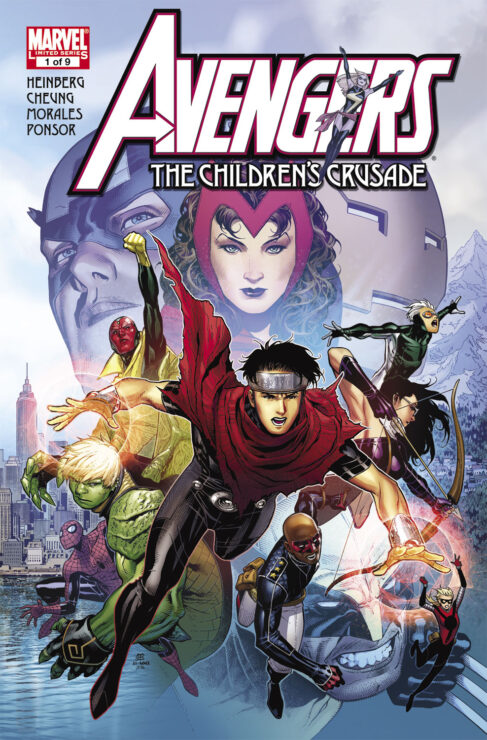 Why Read This?: Firstly, fans unfamiliar with Scarlet Witch’s darling children should acquaint themselves soon- many of the Young Avengers are already cropping up in the future wave of Marvel projects- Kate Bishop, Cassie Lang, and now the twins? Plus, Wanda gets redemption for her actions during the House of M debacle- mostly.

Billy and Tommy are revealed as the twin sons of Scarlet Witch- one has immense magical ability and one is a speedster. Wait, sound familiar? It should. (Though they were created magically, not born naturally.) In Children’s Crusade, the Young Avengers seek Wanda out for help restoring mutantkind to its former strength. Without revealing too much, it turns out that Wanda was not wholly herself during Disassembled and House of M, but someone was abusing her powers.

Could this be the case for WandaVision as well? Only time will tell. This series sets the stage for Scarlet Witch’s triumphant stand as a fully realized hero (though many mutants still consider her their greatest enemy) by the time she gets to Witches’ Road. Do yourself a favor- meet Billy and Tommy. You won’t regret it. 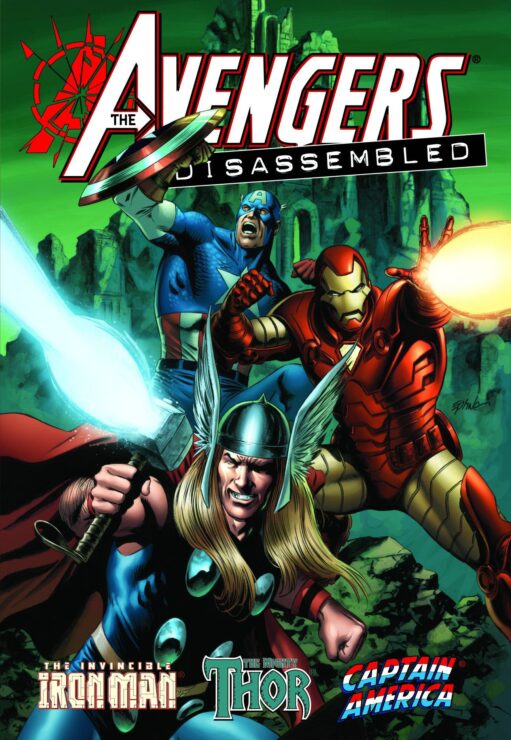 Why Read This?: Before House of M, there was Avengers: Disassembled. To this day, its impacts are still felt on the Marvel Universe. Bendis has always been known as a bold writer, introducing characters like Jessica Jones, Miles Morales, and Riri Williams to the fold. He’s also made big choices, like having Scarlet Witch absolutely destroy the Avengers.

This was one of the tipping points that led to House of M, wherein the heroes realize how dangerous Wanda’s powers truly can be. Vision is destroyed, among other things, and Doctor Strange is forced to contain Wanda, though he is reluctant to kill her. While not as crucial a read as the other four titles on this list, Avengers: Disassembled provides additional background on Wanda’s powers, her mental state, and just how powerful she could be as an enemy rather than an ally of the Avengers.

Are you enjoying WandaVision so far? Any other comic stories you think may have influenced the series? Let Your Geek Sideshow and tell us in the comments!

The Witcher: Blood Origin Casts Jodie Turner-Smith As Its Lead, and more!