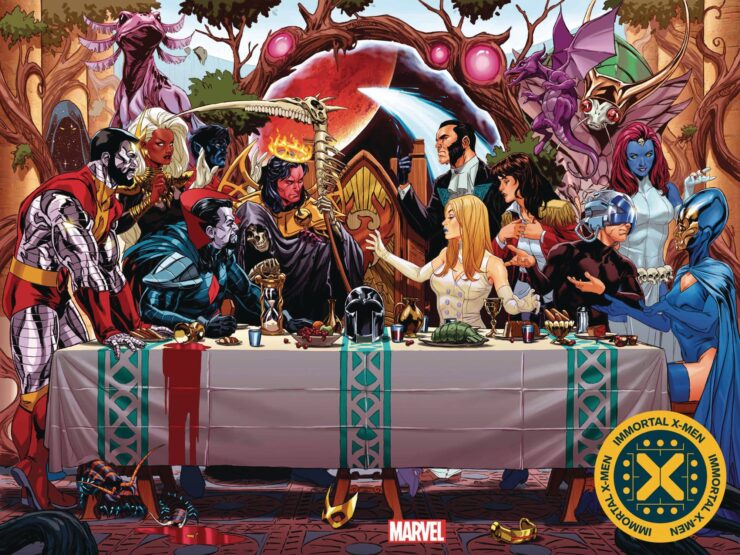 Immortal X-Men #1 will be released at the end of March, and this highly anticipated series continues the exhilarating X-Men evolution happening in comics right now. The mutants of Marvel comics have always been outcasts. Most use their mutations to help the world, yet humans still find reasons to hate them. This element of the X-Men mythos is most famously explored in God Loves, Man Kills. It’s a metaphor that countless readers use to connect with their favorite mutant heroes.

Over the years, radical leaders like Magneto have attempted to create mutant safe havens. Genosha, his independent nation, suffered a catastrophic genocide. Even Professor Xavier’s X-Mansion has been destroyed countless times. But in 2019, when Jonathan Hickman reimagined the mutant mission for independence with House of X/Powers of X, everything changed.

In addition to finding a home all their own, the mutants are establishing their power within the world (and outer space), along with discovering new depths to their powers. Even death and disease have become manageable obstacles thanks to the Age of Krakoa. Let’s first look at how the X-Men met Krakoa back in the Silver Age, then take a deep dive into what this exciting era means for all mutants. 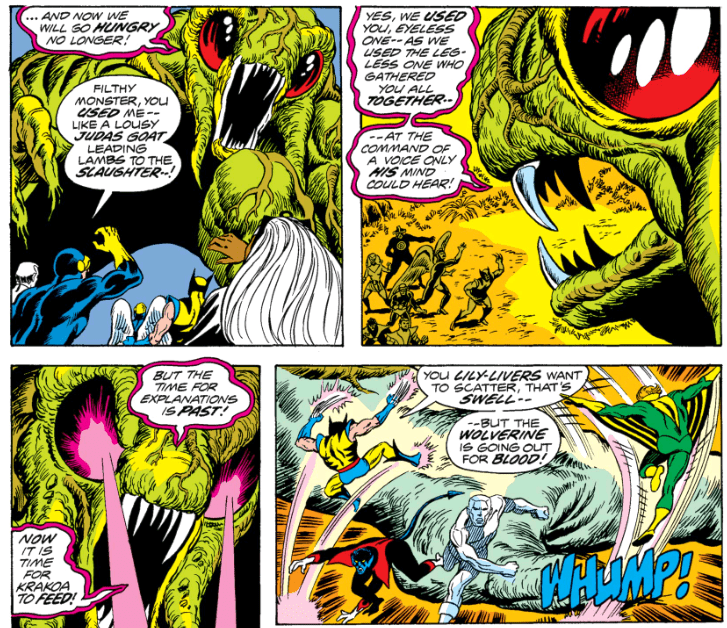 Krakoa first appeared as an antagonist in Giant-Size X-Men #1 in 1975. Against Xavier’s second class of mutants, the Island That Walks Like A Man fed on mutant energies, capturing the original lineup and luring in the new recruits. Only with their combined powers, especially Storm’s electric charging of Polaris’ magnetic manipulation, could Krakoa’s tie to the Earth be severed. The island-mutant was sent hurtling into space, far away from any unsuspecting mutant victims. At least, for a little while.

A Krakoa By Any Other Name… 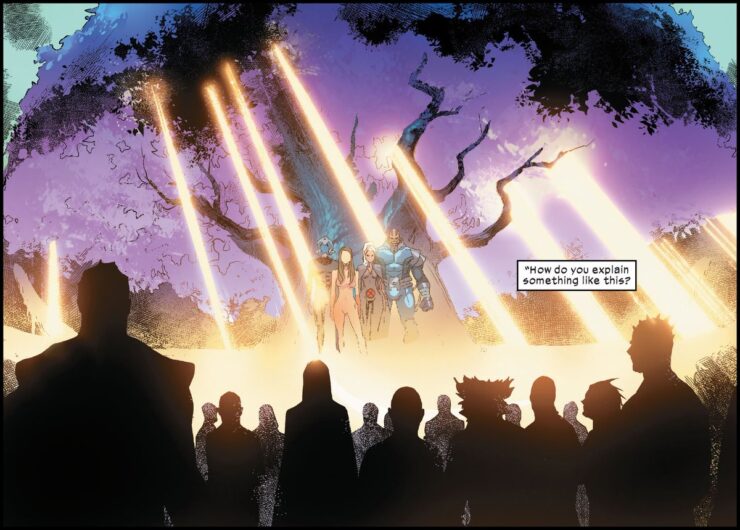 Eventually, Krakoa was able to return to the Pacific Ocean. Seeing an opportunity, Charles Xavier began preparing the space as a new mutant refuge. Under writer Jonathan Hickman’s direction, Moira McTaggert was also revealed to be a mutant with the power of resurrection. This gave her the ability to alter history using her knowledge of the future. Together, she, Charles, and Magneto formulated a plan for Krakoa, the nation of mutants. 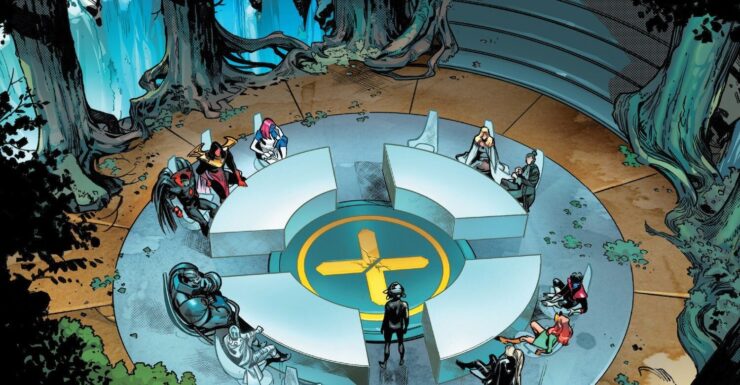 Though Moira’s presence was kept a secret, Charles and Magneto formed the Quiet Council, a committee of mutants to lead the new nation. Composed of trusted allies as well as treacherous enemies, the Quiet Council created laws as well as deliberates on geopolitical matters. With the groundbreaking floral technology of Krakoa, the mutants bartered with the rest of the world, offering life-saving medicine in exchange for sovereignty.

Hatching in the Face of Death

Formerly, Krakoa’s need to feed on mutant energy was destructive, but once the island was fully populated, Krakoa could safely draw a little bit of power from each mutant. Another development is that mutants can now be resurrected. The Five, a group composed of Hope Summers, Egg, Tempus, Proteus, and Elixir, combine their powers to bring back mutants who have died.

With the Five’s new ability, even mutants who were depowered because of the Scarlet Witch can be restored (after a death trial ceremony) with their powers intact. Mutant refugees are brought in from all over the world and anyone who perishes in battle can return thanks to the Five … mostly. For a time, deaths that occurred in Otherworld were irreversible. Once the Five combines their powers to hatch a mutant, the individual’s memories are restored using backup files from Cerebro. At first, Xavier was the only one allowed to do this part of the process but eventually other telepaths step in as well.

Krakoan daily life is unlike anything Marvel’s mutants have ever experienced. They can coexist with each other — heroes, villains, and anyone in between — by taking advantage of the island’s vast resources. Flowers produced by Krakoa allow mutants to travel virtually anywhere using a two-way portal system. Other Krakoan flowers also grow Habitats, offshoots of the island that lead to mutant expansion across the island, around the globe, and into outer space (more on that later).

Hundreds of mutants have now been resurrected and brought to live on Krakoa. Every resurrection heralds a welcoming ceremony, in which the mutant is inducted into Krakoan society with a telepathic implant of the language. Their genetic makeup can also be improved and enhanced. Oh, and did we mention there are bagel trees?

Already, Krakoa has hosted its share of monumental events. Over 10 mutant teams have received a Krakoan relaunch, including X-Factor, Excalibur, the New Mutants, and X-Force — plus an updated X-Men lineup. Newer groups like the Children of the Atom and S.W.O.R.D. are also shaping the future of mutants in profound and unexpected ways.

Following Hickman’s HoX/PoX run, there was Dawn of X, then Reign of X, and next up is Destiny of X. Crossover events like X of Swords have happened, as well as mutant-specific storylines like the Hellfire Gala, the Trial of Magneto, and Inferno.

What’s Next for the Mutants of Krakoa? 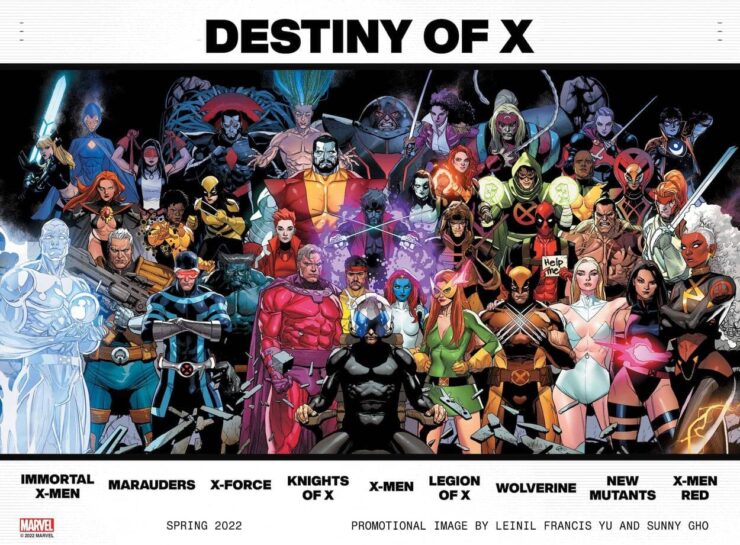 The Age of Krakoa has forever shifted mutant dynamics. Villains have redeemed themselves, as shown by Apocalypse. Other figures, such as Destiny, have returned after decades of death, to completely upturn Krakoan power structures. Even Doug Ramsey has seen increased importance since he created the mutant language of Krakoan and serves as a translator between the Quiet Council and the island itself.

Of course, with all the egos present, the Quiet Council is slowly crumbling from within. Mutants all over Krakoa are discovering a newfound ability to combine their powers and achieve impossible results. Plus, the revelation of Arakko and the formation of Mars into a mutant outpost continues to affect politics on Earth and throughout the galaxy.

Comics receive reimaginings and reboots and retcons almost every decade. But if you’re wondering whether you should commit to Krakoa, the answer is absolutely yes. In the years to come, there’s no doubt that this will be remembered as a pivotal moment in the history of Marvel’s most famous mutants.

Which upcoming Krakoa title are you most looking forward to? Who’s your favorite X-Men team to follow? Let us know in the comments and don’t forget to Let Your Geek Sideshow!