If there’s one thing we all need amid a global pandemic, it’s escapism. To dive deep into a mythical universe beyond our real-world entrapment. I’m sure I’m not the only one resorting to binge-watching TV while confined to my apartment. Now, are you a fan of Buffy the Vampire Slayer? Are you running out of TV shows to watch?

If your answer is “yes” to the aforementioned, might I suggest Wynonna Earp? It’s a supernatural series with hints of Old West-style gunslinging. The lead character, Wynonna Earp (Melanie Scrofano), is an ancestor of famous gunman Wyatt Earp. When Wynonna turned 27 she was saddled with the Earp Curse, wherein she must banish demons known as Revenants that linger in the Ghost River Triangle. Armed with her trusty Revenant-killer Peacemaker, a magical gun that sends said demons back to Hell, Wynonna is a sardonic self-diagnosed alcoholic who’s not too keen on being a heroine. A reluctant heroine? Does that sound familiar?

Wynonna Earp was created as a comic series by Beau Smith, and later adapted for television at Syfy by Emily Andras. The show has spawned a legion of loyal fans who call themselves “Earpers.” Just like the Scoobies!

Below, I’ve compiled a list of reasons why Buffy the Vampire Slayer fans will dig Wynonna Earp. Fun fact: Andras herself was even inspired by our favorite Slayer. 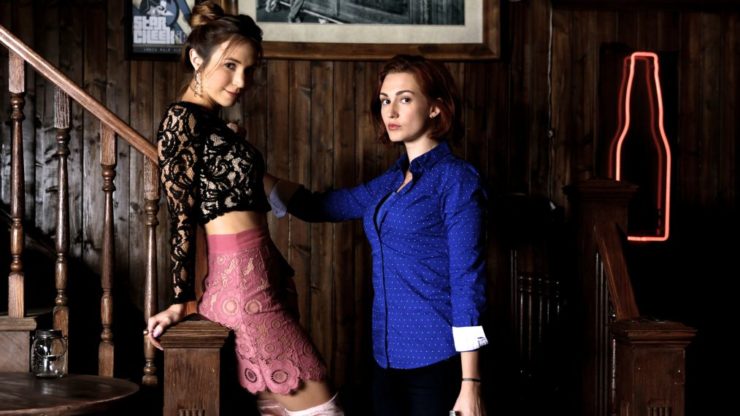 Of course, Joss Whedon broke TV barriers when he showcased a same-sex relationship on Buffy in the early 2000s. Willow (Alyson Hannigan) and Tara’s (Amber Benson) relationship is iconic. Ultimately, it paved the way for Wynonna Earp‘s own beloved pairing: Waverly Earp (Dominique Provost-Chalkley) and Nicole Haught (Katherine Barrell). This couple is affectionately referred to as “WayHaught” by fans.

WayHaught is lauded for its realistic approach to romance, and for shining a spotlight on the LGBTQIA+ community. However, WayHaught isn’t the only representation on Wynonna Earp – there’s also a lovely male couple. I’ll refrain from revealing more spoilers though, so you’ll have to start watching to find out more!

Whedon was known for injecting sharp witticisms into Buffy, with characters like the Slayer (Sarah Michelle Gellar) often doling out one-liners while staving off the undead. Wynonna Earp has a similar sense of humor, and the Earp heir is no stranger to the occasional witty one-liner herself.

She would often shout out things like, “Crazy chick with a gun!”

And, one of my favorites – “Did I hit my head and wake up in patriarchal bullsh*t land?”

Or “Welcome to Team Shut-Up-And-Do-What-He-Says. Sometimes we get doughnuts.”

That’s just the tip of the funny iceberg, but I think you get the gist. 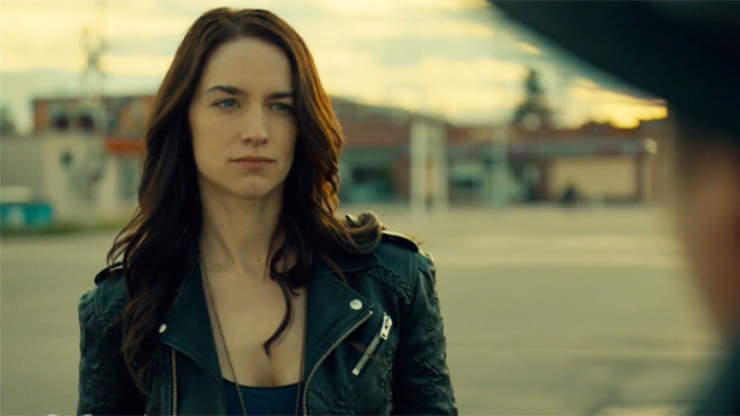 Wynonna is a multi-faceted hot mess of a human being. She’s occasionally cold, incessantly brash, and has a fear of commitment. Of course, she evolves throughout the seasons, as any well-written character would. Wynonna also has positive attributes: she’s loyal to her loved ones. Protective of the Ghost River Triangle. She’s also quite the sharpshooter.

Wynonna is a heroine rife with flaws and complexities alike. But, on the flip side, she’s courageous. A bastion of emotional and physical strength. Her character is akin to Buffy, and I see multiple similarities between the two. Both of these women represent what humanity is really like.

Doc is exactly who you think he is – an immortal 19th-century cowboy who existed in real life. Dolls is an agent who specializes in supernatural phenomena. Wynonna has feelings for both men, and the latter vie for her affections. It’s steamy. And love triangle-y.

Not to mention, there was briefly Waverly and Nicole and Champ (Dylan Koroll). Champ was Waverly’s boyfriend. Two for the price of one! 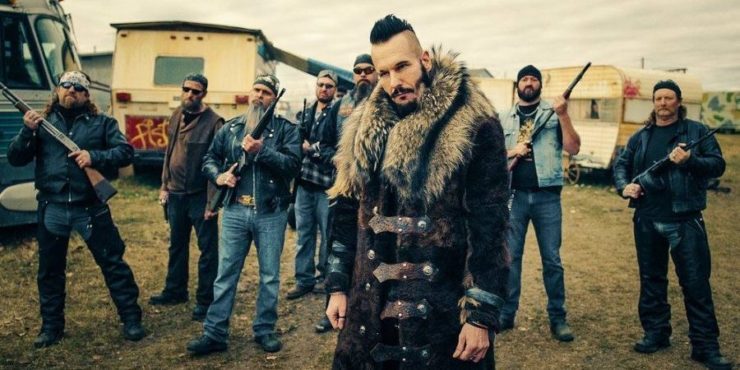 Buffy the Vampire Slayer is known the world over for its interesting baddies. Wynonna Earp has torn a page out of Buffy‘s book by adding intriguing villains to its roster.

Buffy had antagonists like Glorificus (Clare Kramer). Wynonna Earp has Bobo Del Rey (Michael Eklund) – a Revenant who has gone to Hell and back several times over the last century. He proves difficult for Wynonna to kill, is deliciously devious, and very charming. I’m a sucker for a good villain. He’s one of a handful of seasonal bad guys for the show, and worth checking out for Eklund’s multi-tiered performance alone.

Our Slayer Buffy was a champion of rising above the odds. She fought tooth and nail to save humanity, time and time again. Buffy remained stalwart in the face of formidable foes. Her story was one of hope and a rallying cry of persistence. Wynonna Earp also sings a similar tune.

The show encourages us to love without inhibitions and that there’s always hope, even in the direst of circumstances. Even when the world is about to end. It reminds us to never, ever give up, a lesson we should all embrace and put into daily practice.

7. Monsters and Demons and Vampires, Oh My!

Buffy was a trailblazer in the arena of monsters, that’s for certain. They adopted the monster-of-the-week formula, which works well for supernatural TV. Wynonna Earp followed their lead with a slew of monsters, demons, and vampires. Oh my!

Wynonna spends the majority of her time fighting off Revenants, just like Buffy battled vampires while on patrol. There are also new creatures unique to the series, as Buffy had its fair share of different monsters. But, you can’t go wrong with demons and vampires. Everybody loves bloody brawls between heroines and the undead! 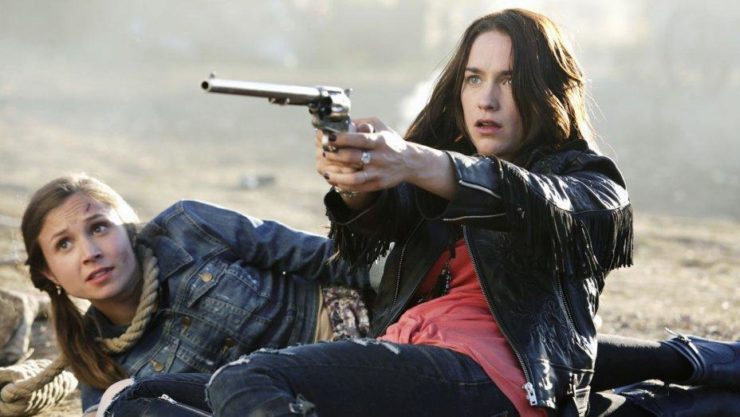 Who doesn’t love a handy dandy curse? Not I!

Buff had her Slayer curse and Wynonna is burdened with the Earp curse. Both utilize magical weaponry to protect their homes from malicious beings – weaponry that only they can wield. Curses make for good drama and supernatural hijinks aplenty!

Scoobies continuously saved the day in Buffy the Vampire Slayer, while Team Black Badge fends off the forces of darkness in Wynonna Earp. The two groups were dubbed these names within the context of their respective shows.

Each group was comprised of “misfits” and archetypes of all kinds. Societal weirdos who banded together to form a family of sorts. Which leads me to my last reason…

10. All About Finding Your “Found Family”

Wynonna Earp reminds us that family doesn’t always mean blood, or those that share the same DNA as you. Sometimes you find family in unexpected places, and forge familial bonds that can weather any storm.

Buffy the Vampire Slayer also toyed with the idea that family isn’t just about blood. Friends can be family, too. In fact, the theme of togetherness on Wynonna Earp has spilled over into real life – the “Earper” community is like one big happy family. May all fandoms take note and follow in their footsteps.

Now, I hope this inspires you to start watching Wynonna Earp, fellow Buffy-lovers! You can play catch up with Seasons 1-3 on Netflix. Wynonna Earp Season 4 is set to premiere later this year on your Syfy affiliate.

What do you love most about Wynonna Earp? Let Your Geek Sideshow and tell us your thoughts in the comments!