Attack on Titan centers around the lives of best friends Eren Yeager, Mikasa Ackerman, and Armin Arlert. During the anime series’ pilot episode, we meet these three children as they survive inside a fortified wall. No one knows how the wall really got there, but they all know from what it protects them: Titans.

Eren, Mikasa, and Armin all have similar misgivings about their place in life, though with varying plans on how to achieve something beyond the so-called livestock pen they call home. The pilot illustrates Eren’s ambition, Mikasa’s loyalty, and Armin’s optimism. What we all wonder is — whose viewpoint will get these three the furthest?

Season 1 gives us hints and hope. By season 4, however, most of those predictions have been gobbled up like Titan fodder. And it’s because our main characters have changed so drastically — or not changed enough — that we hardly know who they are anymore. With that in mind, let’s analyze how Eren, Mikasa, and Armin have changed from season 1 to 4 of Attack on Titan.

*WARNING! This article contains spoilers for Attack on Titan season 4. 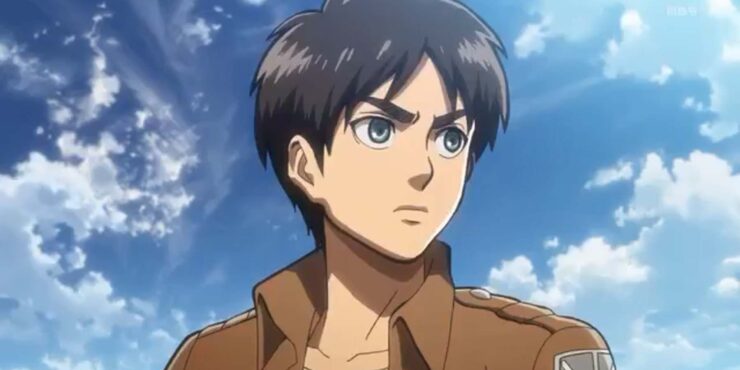 Eren Yeager is a passionate, courageous young man who has always protected the people he loves. He wants to become a Scout in order to eliminate Titans and help humanity achieve a future outside the wall. No matter what, he doesn’t want to be a caged animal just waiting for Titans to break through the wall and destroy everything.

When Eren’s mother is eaten by a Titan, Eren’s thoughts turn toward vengeance. He still wants the same thing — freedom — but there is a bloodthirsty quality to his vows that clouds his starry-eyed conviction. Additionally, once Eren learns he can transform into a Titan, his own impressive perseverance and this newfound ability combine to form someone who knows exactly how he can get what he wants. At this point, though, it’s just to save his Scout Regiment family from Titans. 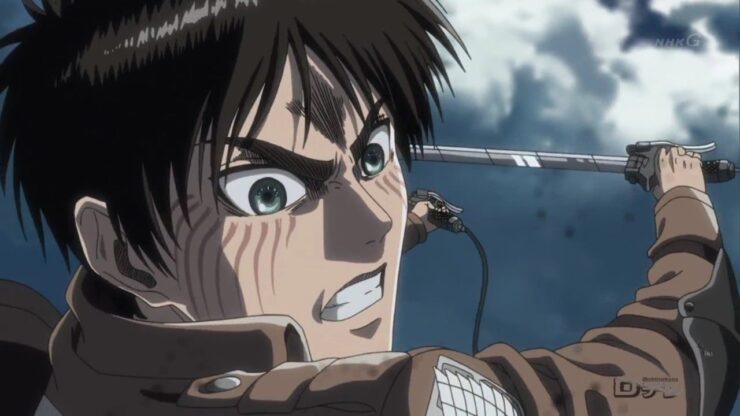 In Attack on Titan season 2, Eren is as angry as ever, but now he has the skills to back up his impulsivity. He’s learning how to control his Titan form better. He’s also a better human soldier. However, Eren is also completely controlled by his emotions. Whenever he can’t help someone, especially Historia Reiss, he flies into a blind and guilty rage. Eren beats himself up mercilessly for his failures, shouldering huge amounts of guilt, regret, and the burden to protect his loved ones … at all costs.

However, Eren also gains access to former Attack Titan memories this season. He witnesses his father, Grisha Yeager, murder an entire family and then force Eren to eat him and inherit the Titan. Eren is disgusted by his father’s actions and can’t fathom why he would commit such horrific acts. This also contributes to his self-sacrificial nature, as he feels he is unworthy of life when so many have suffered to preserve him. 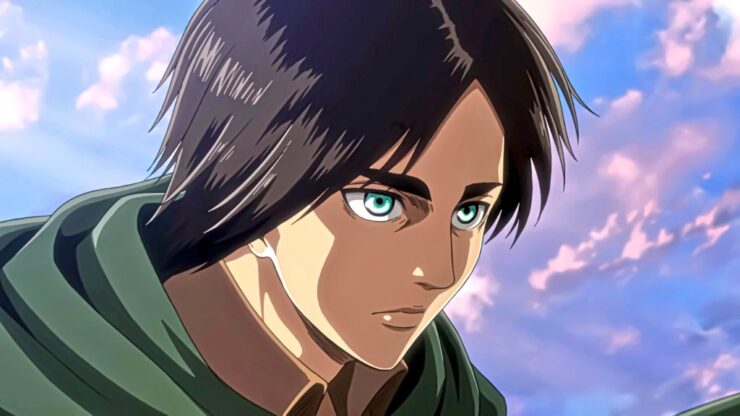 Everything changes for Eren once he learns about the Marley Empire and the oppressed Eldian people. His fight for freedom reaches a global scale. At the end of Attack on Titan season 3, Eren looks haunted by his mission. Little joy is left, and he can’t even enjoy seeing the ocean with Armin — even though it was their lifelong dream. Finally, Eren asks, very seriously, if killing everyone outside of Paradis will bring him and his friends peace. 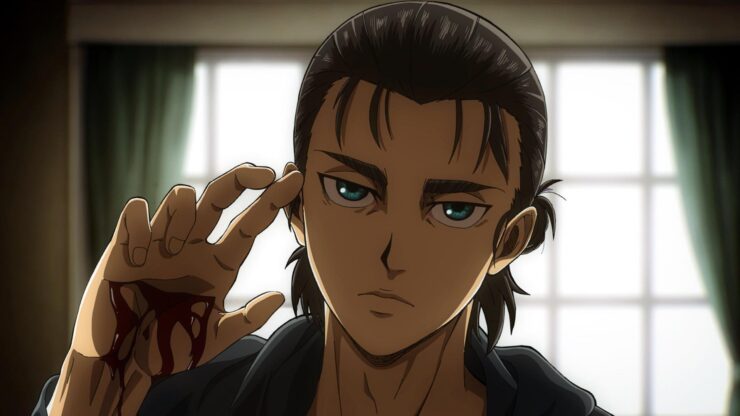 Attack on Titan season 4 asks the audience to question everything they’ve ever known about Eren and his world. Eren seems apathetic and his rage is more quiet, yet far more intense. Plus, he can access past and future memories of anyone who held the Attack Titan. That has to take its toll.

In season 4, Eren has plans upon plans. We can’t trust him anymore. For a lot of the season, many viewers even thought he had sided with his half-brother Zeke to carry out a genocidal plan borne of internalized prejudice. There’s relief when Eren turns against Zeke. Yet the stress comes back tenfold as Eren unleashes “the rumbling” upon the world. He vows to obliterate anyone outside of Paradis. And yet, the island isn’t faring well, either, with buildings and people crushed by rubble, Titans, and other warring humans.

So, is Eren Yeager irredeemable at this point? While his plans may still come from a place of wanting to protect his friends, we have to ask, at what cost? 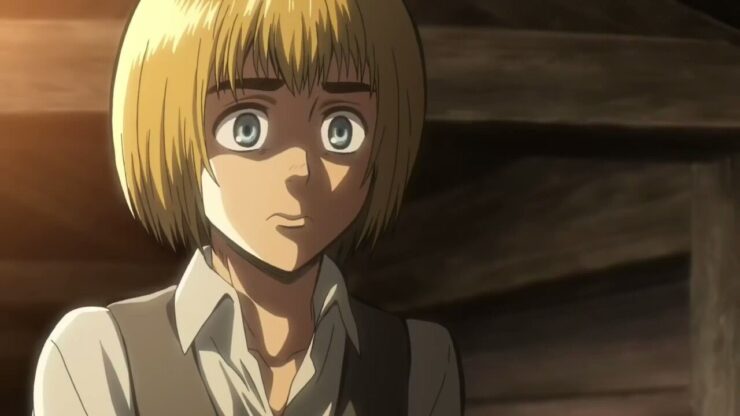 Intelligent yet insecure, Armin Arlert is the member of the group that constantly gets bullied. Armin dreams of a life outside the walls, though the vision is not coupled with warfare. Because Armin reads about oceans and ice and lava, he wishes to leave the confines of the walls so he can discover these natural wonders. However, Armin is too physically weak to achieve his dreams on his own — not that he would ever want to, of course.

After joining the military, Armin gets stronger. Although he is still behind his peers in terms of endurance and ability, he makes up for that lack of brawn with his strategic capabilities. His role in season 1 is that of the thinker. 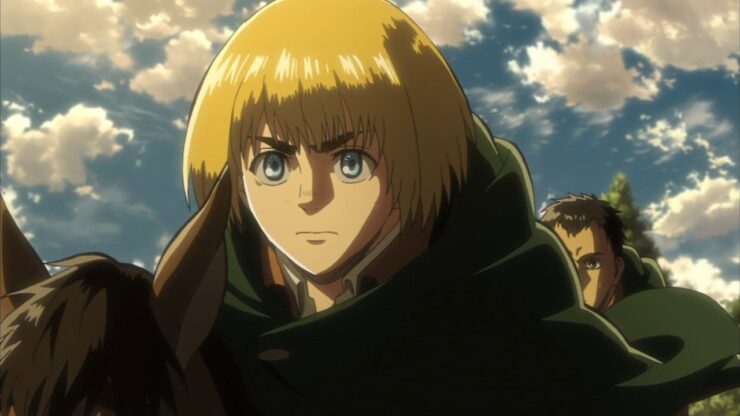 Armin has matured a bit in season 2. Stronger both physically and mentally, he develops the thinking pattern of a commander and not just a smart kid. His plan is what helps the Scout Regiment capture Annie Leonhart, the Female Titan. However, his desire to outsmart and beat the enemy changes him. Armin consciously decides to abandon his integrity in order to ensure victory. He also kills another human being for the first time to save his teammate Jean Kirstein. 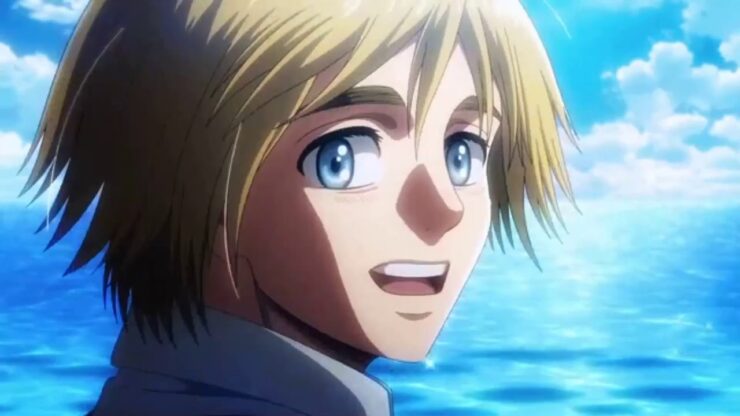 Armin Arlert dies in season 3. Well, almost. Steamed and burnt alive by the Colossal Titan, Armin proves he can beat any antagonist with his wits — his body, however, can’t keep up. In a tense moment, Captain Levi allows Armin to be saved, rather than Commander Erwin Smith, with a Titan serum. This puts a lot of pressure on Armin to live up to Erwin’s legacy. For a lot of time after his near death, Armin feels guilt and insecurity about his regifted life.

A beautiful scene at the end of season 3 reminds us of who Armin is. He sees the ocean for the first time and is overwhelmed at having fulfilled that longtime goal. Playing and splashing in the saltwater, he smiles. 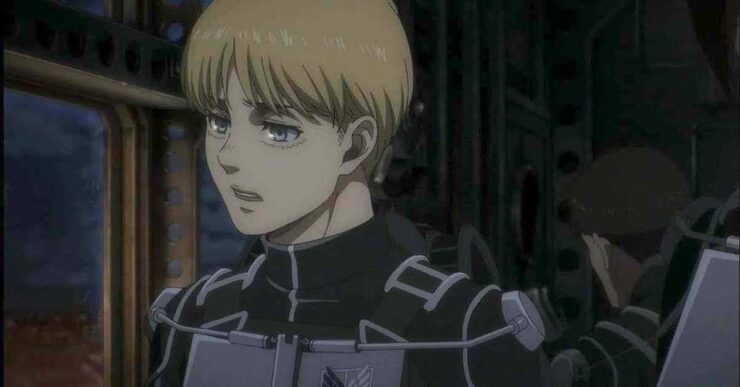 Always the strategist. Always the optimist. In Attack on Titan season 4, Armin is burdened by the Colossal Titan yet nonetheless hopeful about humanity’s future. He retains his unshakeable faith in Eren, certain his best friend won’t go along with the Eldian sterilization plan even while so many other Scouts believe Eren has forsaken them.

Whereas Armin was able to predict Eren’s actions before, he can no longer anticipate Eren’s behavior — such as the young man’s decision to crush the rest of the world beyond Paradis. Armin’s plans and analyses are weaker in season 4 because he can’t fully understand every variable anymore. 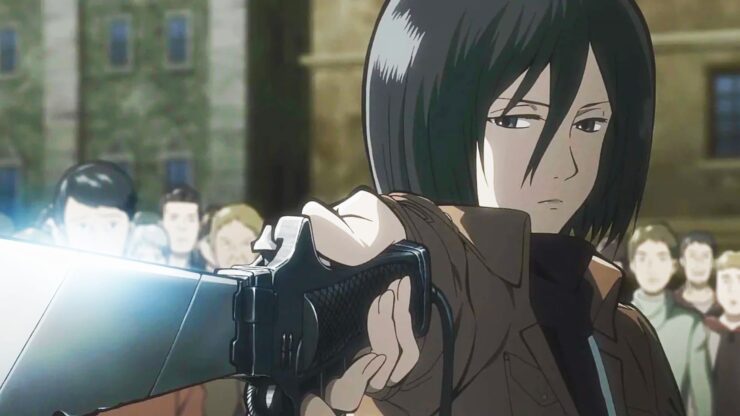 Mikasa Ackerman is quiet, aloof, and unquestionably loyal to Eren Yeager. After being kidnapped in her youth by bandits and subsequently rescued by Eren, Mikasa has pledged her life to her companion. Similarly, she protects Armin from street bullies. Because of this pledge, she is physically stronger than both the boys and is constantly beating up their enemies. This battle prowess is expressed quite a bit in season 1 as Mikasa excels in military training to become one of the most apt fighters the Scout Regiment has ever seen. 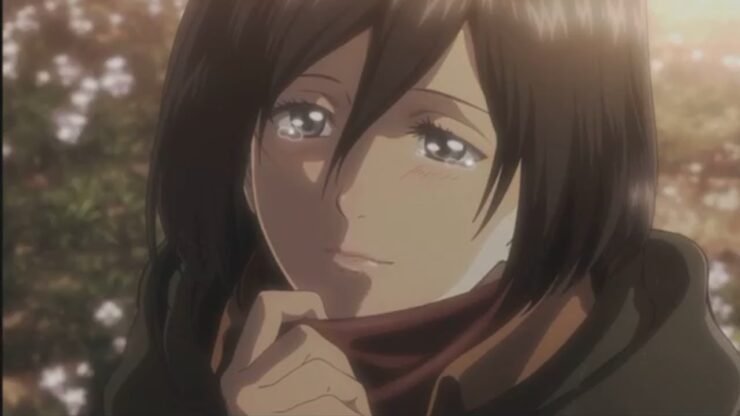 We see more of Mikasa’s softer side in season 2. While she’s still an absolute badass, her time with the Survey Corps has given her more people to open up to. Instead of just Eren and Armin, Mikasa has a whole family of soldiers who protect her and are protected in return. And even though Eren is still her priority, Mikasa cares deeply for the rest of her corps, as well. 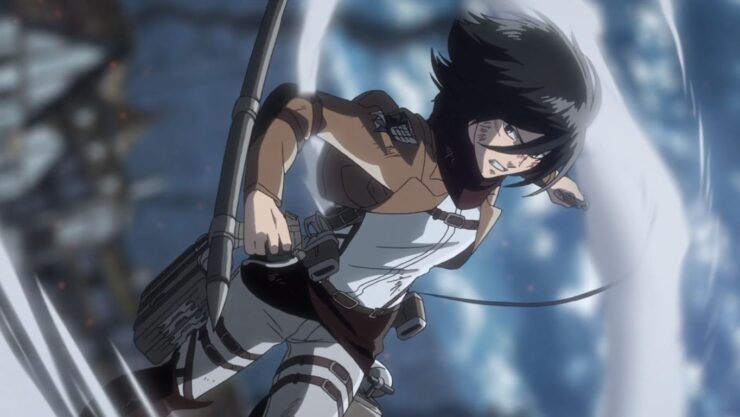 After Reiner, Bertholdt, and Annie betray the Scouts, Mikasa goes back to a more reserved, callous state. Her fighting skills only continue to improve. Life is more dangerous now, though, so she’s fully devoted herself to Eren. Her life revolves around protecting him, saving him, and ensuring his safety while he’s a Titan or while he’s unconscious.

She even forgoes some of her intelligence this season in favor of believing what might be more emotionally favorable. For example, Titan inheritors die after 13 years of possessing their Titan, but Mikasa point-blank refuses to accept that because it means giving up Eren. 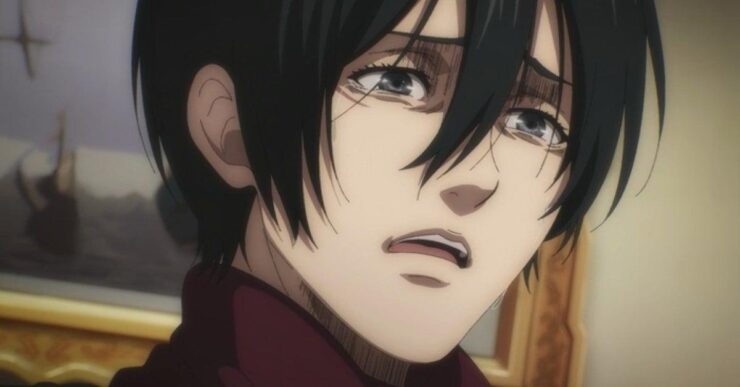 Mikasa carries such a solemn sadness within her in Attack on Titan season 4 that it’s often difficult to look at her. Everything is crumbling around her. She loses Eren to Marley and when she goes to get him, he’s not the same person. Her fighting style, while now fully refined, is also cold and calculating and she’s willing to kill anything — or anyone.

Lastly, her entire sense of self is shattered. Mikasa bears the weight of the Ackerman clan history as well as the requests of her ancestors to rejoin them in a faraway land. Plus, Eren has pushed her away. She is torn between her obligation to him versus her duty to save herself, Armin, and the Scouts. All the while she suffers silently under these pressures, keeping her head down and following orders.

What do you think of Eren, Mikasa, and Armin’s character development in the Attack on Titan anime? Do you think they’ve truly changed all that much, or can you recognize who they used to be? Let us know in the comments, and don’t forget to Let Your Geek Sideshow!