In the world of Attack on Titan, the Survey Corps — also sometimes referred to as the Scout Regiment — is the military branch most directly involved in combating the Titan threat. Their other duties include Titan study, outside exploration and mapping, and paving the way for humanity’s expansion outside the walls.

Over the years, the Scouts have gained and lost many members. Some of these people were mere background Titan fodder. They provided a splash of a green cape — then promptly a splatter of scarlet blood. But other Scouts stand out amongst the rest. Let’s rank the 10 strongest Survey Corps members based on their fighting and strategy skills.

*This article includes major spoilers for the Attack on Titan anime. 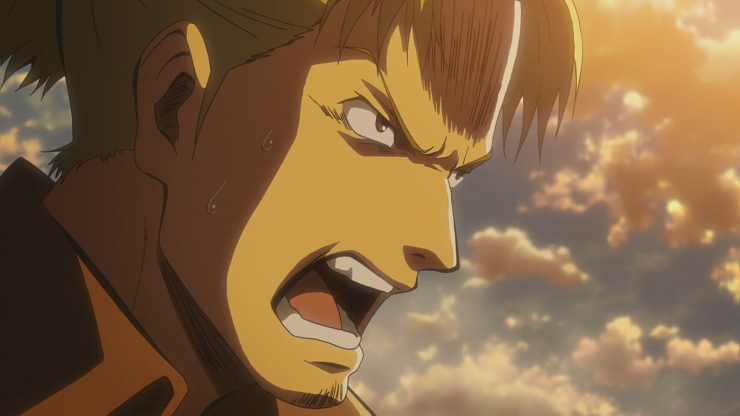 Although long deceased, Eld Gin deserves special recognition as the second in command in the Special Operations Squad. Hand-picked by Levi, Eld is the only other Scout deemed strong and responsible enough to protect Eren while Levi subdues the Female Titan. Eld is a blunt, capable, and responsible leader with a stern sense of justice and good sense of camaraderie among his teammates. Additionally, he is considered a veteran of the Levi Squad, suggesting he had survived many Titan encounters. His Titan kill record is an impressive 46, though he maintained that the strength of a soldier came from more than the corpses they carried. 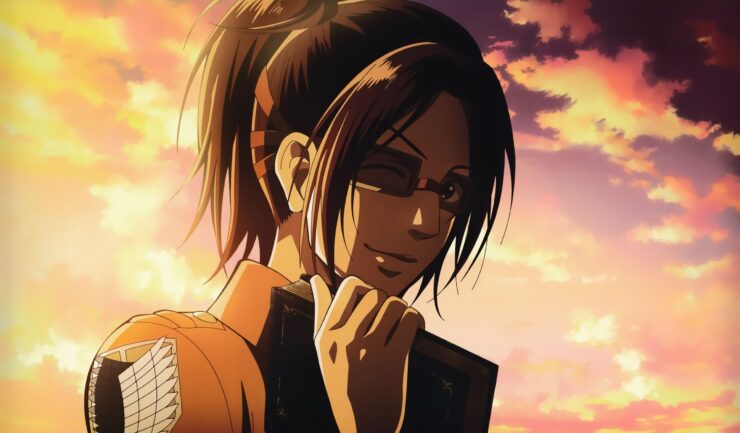 Strength does, indeed, come from other places besides brawn. Zoë Hange is courageous and has a big heart. She wants to study Titans, not senselessly kill them. Plus, she has impressive reflexes, shown whenever she has to leap out of the way of one of her test subjects. Part of what puts Hange on this list, though, is her fresh optimism. Hange never loses faith in humanity or in her friends. Loyal and friendly, Hange believes in the Scouts. Plus, she believes in herself. That kind of confidence in an apocalyptic world full of mistakes, failures, and fear is true strength. 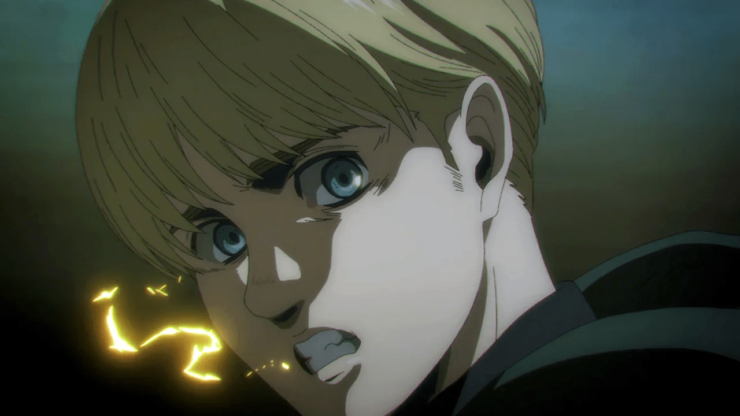 Armin Arlert is not the most capable soldier. He is physically weaker than many of his peers in the 104th Cadet Corps, struggling to complete most of the military drills. Despite his shortcomings, though, Armin makes it into the Top 10 of his class, meaning he trained and persevered enough to get top scores. This is largely due to his strategic analysis abilities.

Because Armin is absolutely one of the most intelligent characters in the entire show, he is able to outlive and outperform the majority of Scouts. When the Survey Corps must choose between reviving Erwin Smith or Armin, it’s Armin who is selected as the better choice to carry the Colossal Titan. This is because his strategies are even better than the late commander’s. 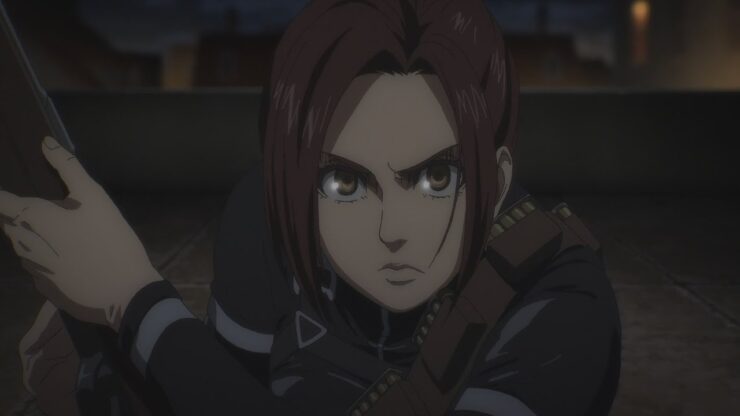 For most of Attack on Titan, Sasha Braus is a comedic relief character. She doesn’t take her military duties too seriously, and is always hungry. At one point she earns the nickname “Potato Girl.” However, Sasha grew up hunting. Those abilities translate extremely well into slaying Titans, and later, she is an invaluable sniper in the fight against Marley. Coupled with her quick reflexes, she’s a formidable opponent.

What ranks Sasha so high on this list, though, is one specific moment. During another Titan invasion inside the walls, Sasha rides to her home village to find a young girl and her crippled mother trapped inside a house with a Titan. Sasha fights it off with an ax. Then she takes the little girl and, on foot, the two escape into the forest. Yet the Titan pursues. In a stunning act of bravery, Sasha takes her last arrow and plunges it into a Titan’s eye with her bare hands. It’s a jaw-dropping display of Sasha’s power. 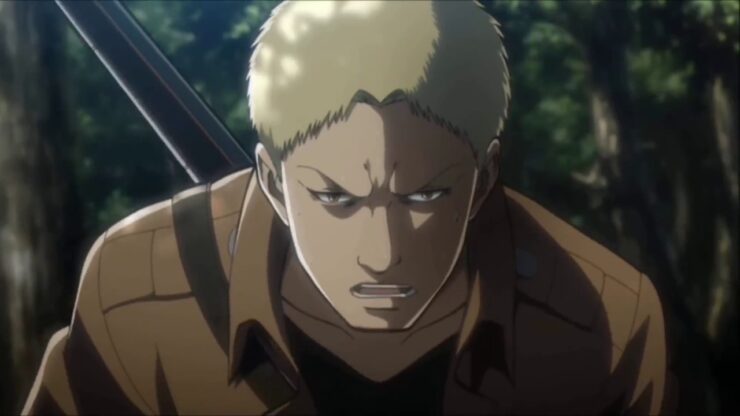 You have to be strong to be selected as a Warrior. This is especially true of the person inheriting the Armor Titan, an absolute brute of a Titan. Well, Reiner Braun has the physique to match. And while it’s true that he’s a strong Titan user, his strength as a Scout comes from the way he helps his fellow soldiers as well as the way he fights off Titans. What he doesn’t have in speed or smarts, Reiner makes up for in his arms. During one memorable fight, he holds back and then tosses a Titan out of a window with his muscles alone — while in human form, no less. We’re certainly impressed. 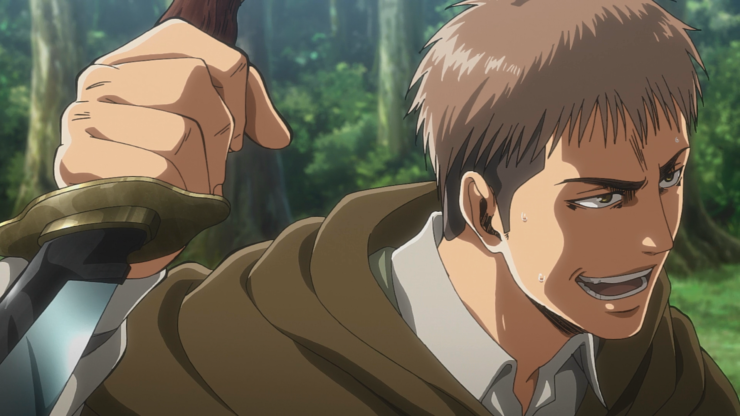 From the start of his military training, Jean Kirschtein makes it very clear he’s only working for the Top 10 Cadet list so he can claim a cushy job protecting the king. Jean’s first fight against the Titans — plus Eren’s rousing speech — changes his mind. He’s all in from then on, willing to fight and kill to win. It takes a lot of internal strength to put yourself on the line when you have every reason, chance, and ability to pick the easy route. 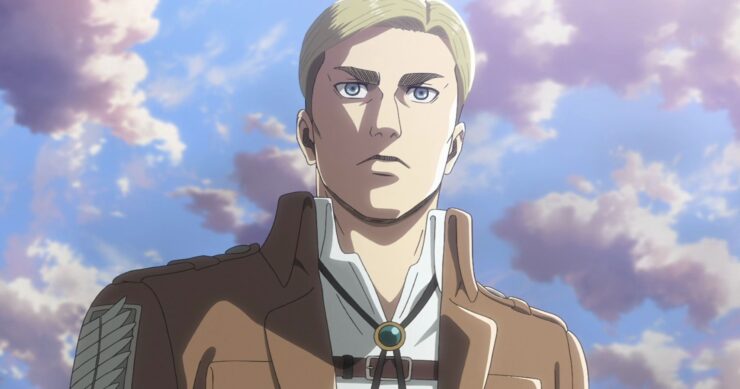 The 13th commander of the Scout Regiment, Erwin Smith, is discerning, ambitious, and widely respected. This inspirational leader is stoic and stern, following through with his plans with little to no emotional response. Such a serious attitude earns him strength of character. He’s also physically impressive, of course, as displayed when he recovers quickly from losing his arm.

Erwin’s big weakness, or why he isn’t higher on this list, is his uncertainty. While he acts like he’s always steps ahead of everyone, Erwin is plagued by doubt and often wonders if his choices are worth the cost. He doesn’t consult anyone or falter, however dangerous or morally reprehensible a plan is. Yet he still isn’t sure it will or should work. Such a lack of communication and trust in his fellow Scouts isn’t helping anyone. 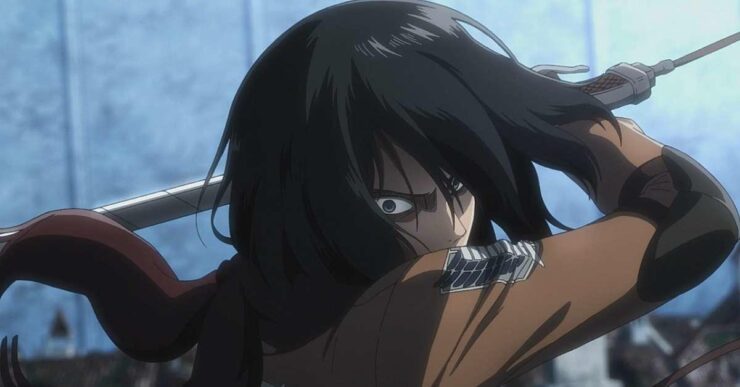 Mikasa Ackerman has been fighting all her life. She killed her kidnappers when she was a child. Similarly, she beat up Armin and Eren’s bullies. An awesome and fearsome warrior, Mikasa is talented beyond reason and has trained those innate abilities until her body has become a living weapon. Also a valuable military asset, she’s continuously fighting alongside the veteran soldiers even though she’s completely inexperienced comparatively.

Unfortunately, Mikasa does have a major weakness: Eren. Her feelings about him constantly get in the way of her rational thinking. When he’s in danger, Mikasa acts impulsively and recklessly. She holds his life above her own — or anyone else’s. While this is not entirely her fault because her bloodline is predisposed to protecting important Eldians, it’s nonetheless her biggest shortcoming and has gotten her in trouble too many times. 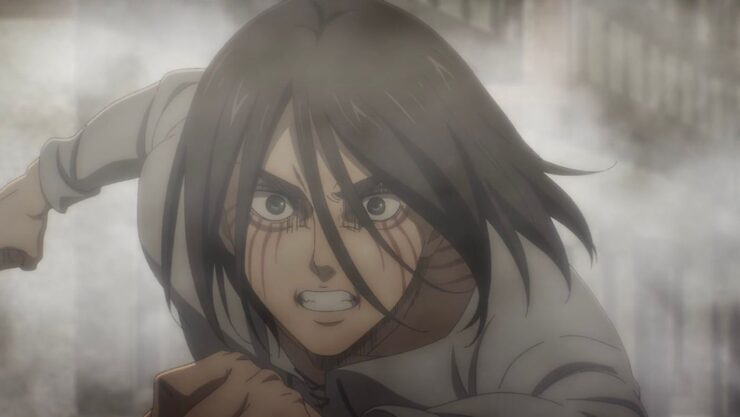 Eren Yeager is undoubtedly one of the strongest characters in the show. First, from a young age Eren displays extraordinary conviction to his cause: humanity’s freedom. Then, he joins the military to achieve his goals, showing the strength of his ambition. Passion can only get you so far, though. During training camp, Eren can’t master his ODM Gear. If he can’t work it, he fails. And he’s very aware of that scary fact.

On the day of the final test, Eren manages to stay upright in broken ODM equipment. It should be impossible, but he does it. From this moment on, we know Eren can handle anything. This includes surviving every battle and avoiding imprisonment, inheriting three intelligent Titans, and leading the biggest attack against the Marley nation that the world has ever seen. In season 4, it seems Eren Yeager may even be able to beat death itself.

Why is he only ranked #2, then? Well, this is a list of the strongest Survey Corps members. Despite his commitment to humanity, Eren has lost his conviction to the the Scouts. Eren has abandoned his brothers and sisters in arms, as well as his oldest friends, to complete his secret plans alone. He’s hurt many of them in the process — physically and emotionally. Guarding his heart, then, is the opposite of the Scouts’ motto that asks members to “dedicate your hearts.” 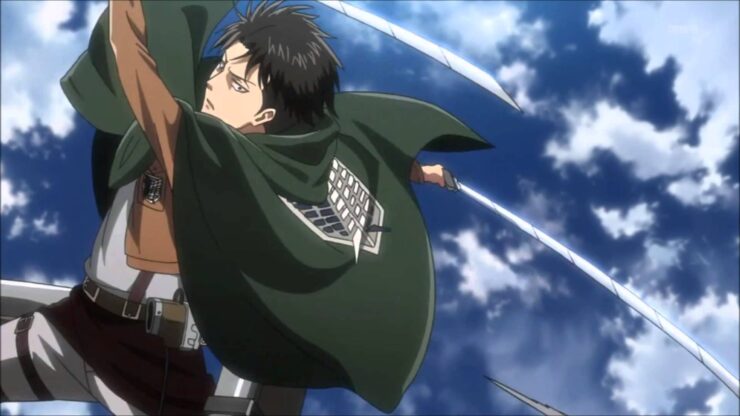 Unsurprisingly, Levi Ackerman ranks #1 on our list. He’s the best Titan killer, flying through the air on his ODM gear like he was born in it. Additionally, the man is street-smart due to his past, as well as strategically gifted because of his commitment to learning from Erwin. Levi can also fight in more than ODM gear. Don’t be fooled by his small stature; Levi packs a powerful punch and a deadly kick.

Furthermore, Levi is emotionally strong. He has no illusions about the regret, guilt, and trauma that come from being in command. Knowing he’s doing his best, though, he learns to live with his actions. Levi is an excellent example of how to metabolize disappointment and how to fight every day against unspeakable odds.

Who do you think is the strongest Survey Corps member in the Attack on Titan anime? Let us know in the comments, and don’t forget to Let Your Geek Sideshow!