You don’t need to be the World’s Greatest Detective to find the best Batman artwork! Sideshow offers countless creative depictions of the Caped Crusader and company.

Below, browse DC Comics fine art featuring characters such as Batman himself, The Penguin, The Riddler, and Catwoman. You can add them to your own Gotham gallery, or gift them to the Bat-fans in your life. 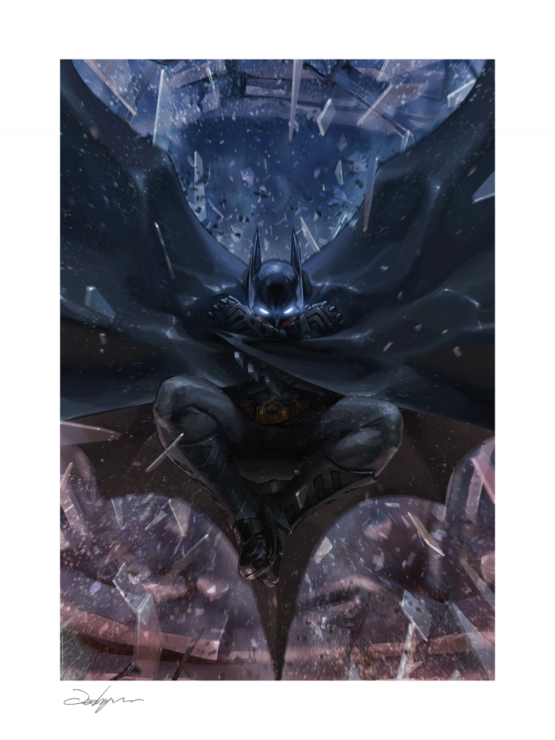 Batman bursts into a building in this action-packed comic book artwork. Now available in a fine art format for collectors, The Batman’s Grave #1 Fine Art Print by Jeehyung Lee emphasizes Batman’s otherworldly appearance as a creature of the night, his eyes alight with sonar and shards of glass falling around his sharp frame. Place it in the foyer to strike fear into the hearts of your enemies. 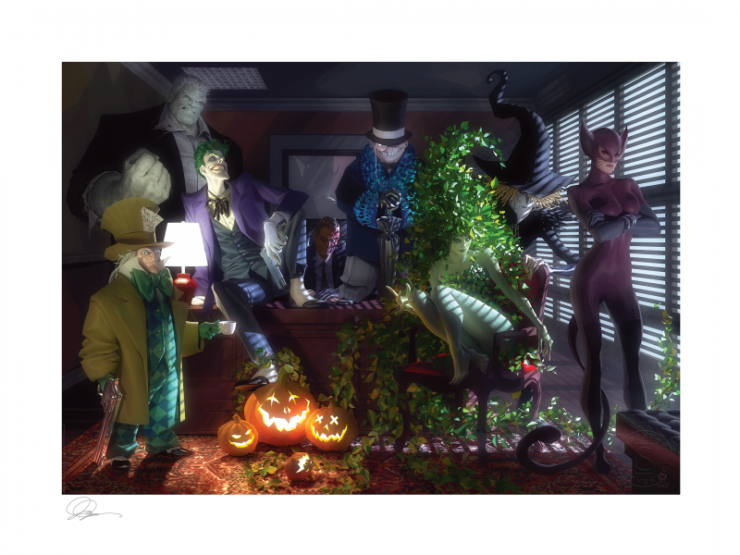 Trick or treat! Batman villains Mad Hatter, Solomon Grundy, The Joker, Two-Face, The Penguin, Poison Ivy, Scarecrow, and Catwoman have united in their early days of terrorizing Gotham in the Batman: The Long Halloween Fine Art Print by Alex Garner, after Tim Sale. We recommend placing this in the living room so that guests can find all the hidden bat symbols during all your October parties. We’ll even give you a hint: Look at the jack-o’-lanterns! 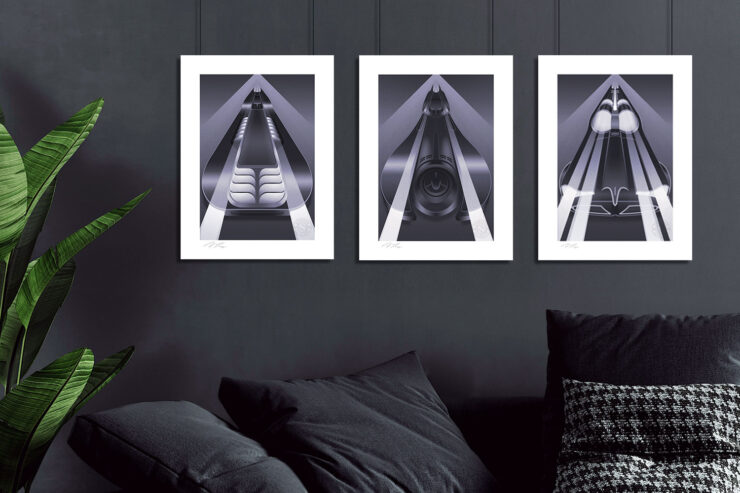 Garage in desperate need of DC wall art? Look no further than the Batmobile Fine Art Print Set by Fabled Creative. Featuring iconic vehicles from Batman: The Animated Series (1992), the Batman television series (1966), and Batman (1989), this Batmobile art set celebrates the past and present of Batman’s sleek, stylish ride.

Bring on the Rain Bruce Wayne and Selina Kyle are an iconic DC couple for a reason. Their chemistry soars in the Bring on the Rain Canvas Print by Jim Lee, a BatCat art piece honoring decades of love, trust, and two characters capable of holding each other through the darkness. In fact, this variant cover was originally created to commemorate Batman and Catwoman’s upcoming wedding. 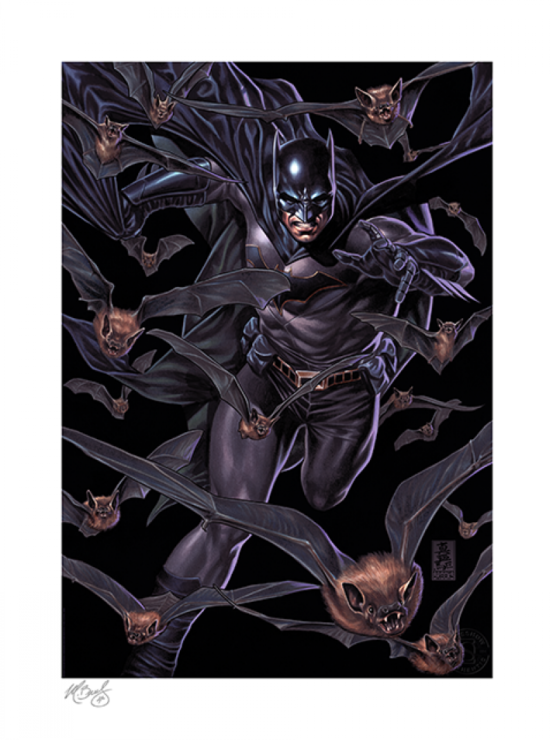 The Batman: Detective Comics #985 Fine Art Print by Mark Brooks reminds us to face our fears. Surrounded by the nocturnal creatures from which Bruce Wayne once cringed, Batman lunges through the darkness alongside a colony of shrieking bats. Spread your wings, confront your terror, and add this art to your DC collection today. 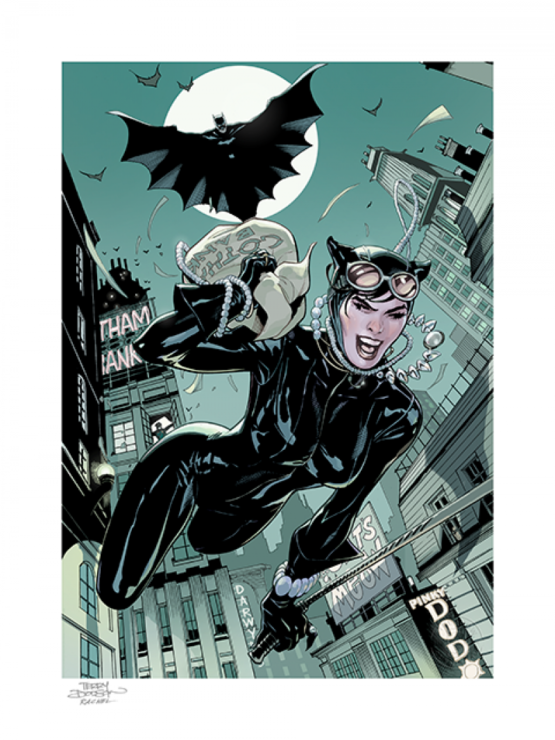 Catwoman has stolen Gotham’s precious pearls as well as Batman’s heart in The Getaway: Batman & Catwoman Fine Art Print by Terry and Rachel Dodson. This DC print tells the classic story of how this couple spends time with each other — a cat and her treasure and a bat and his prey. Add romance and excitement to your art collection with the addition of this comic composition. 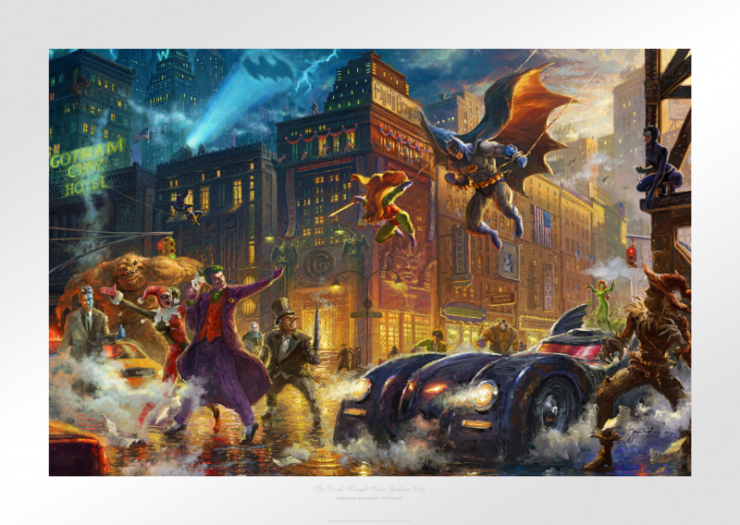 A breakout at Arkham Asylum brings the heroic trio Batman, Robin, and Batgirl onto the streets in a dashing, dynamic DC art piece. The Dark Knight Saves Gotham City Fine Art Print by Thomas Kinkade Studios is colorful and captivating, with myriad mayhem makers providing hours of DC-themed “I Spy” games. We spy … Clay Face and Bane! The Riddler and The Penguin! The Joker and Harley Quinn! And so many more. 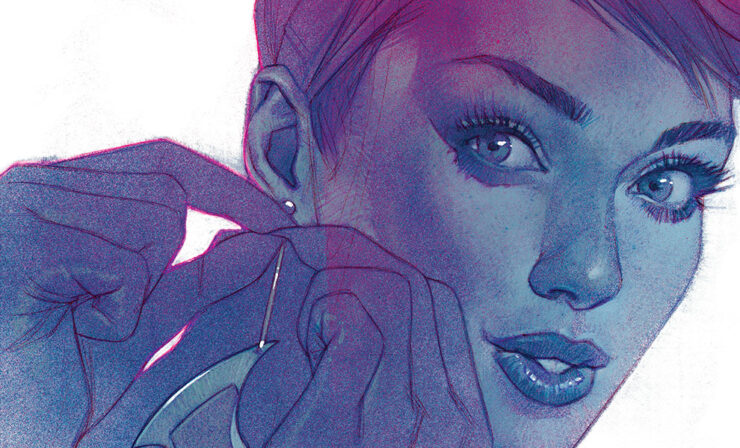 Me-wow! Selina Kyle pins a purloined Batarang on as her own personal earring in the glamorous Catwoman #7 Fine Art Print by Ben Oliver. Purrfect purple tones emphasize her elegance, while warm pink confesses her love and cold blue reminds the viewer of Selina’s mysterious nature. This Catwoman portrait will surely be the prized jewel of your DC artwork collection.

Will you be adding any of these DC Comics art prints to your walls? Let us know in the comments, and don’t forget to Let Your Geek Sideshow! 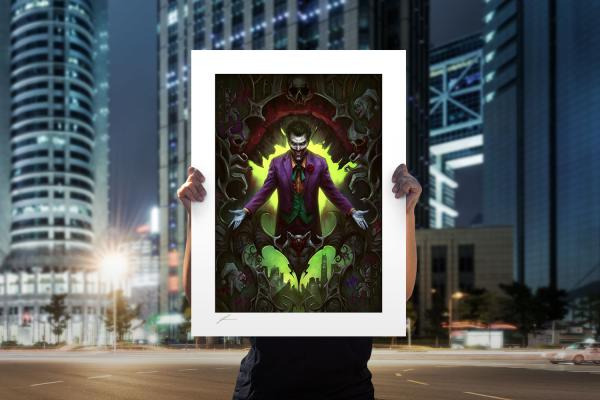 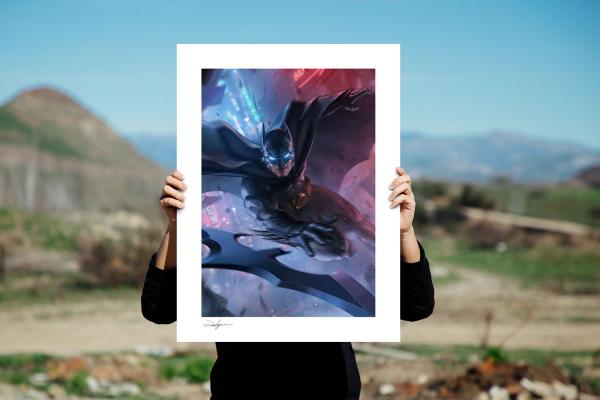 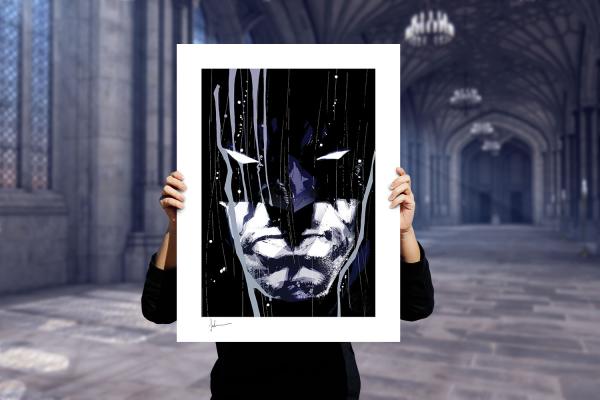 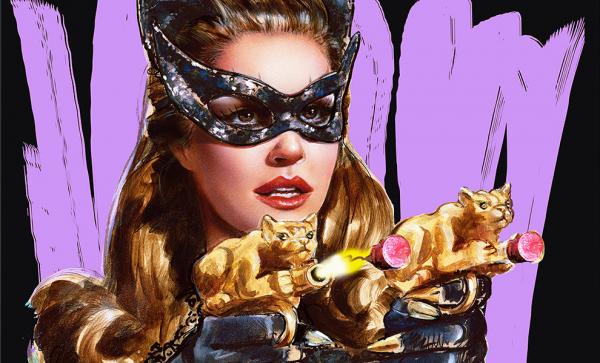