Now that Doctor Strange in the Multiverse of Madness has premiered, the implications of such a monumental Marvel movie will be felt in Phase Four and beyond. The film is packed with the signature MCU cameos, surprising twists, and more than a dash of macabre horror.

From the humorous, like when America Chavez refers to Stephen as “este guey,” to the dramatic, like Wanda’s many threats, there are plenty of noteworthy quotes from Doctor Strange in the Multiverse of Madness. Step through that star portal and take a look at our top 10 choices.

Spoilers ahead for Doctor Strange in the Multiverse of Madness

“Because, Stephen, you have to be the one holding the knife. And I always respected you for it, but I couldn’t love you for it.” – Christine Palmer

A central aspect of Stephen Strange is his love for Christine Palmer. But Christine realizes, with pain and disappointment, that Stephen is not the right man for her. At her wedding, she and Stephen share a brief exchange. She tells Stephen, using a medical analogy, that he always has to be the one in control because, admittedly, he often does know best. While this assumed leadership is admirable, it does not create a healthy partnership. Christine knows there’s more to love than just love itself.

“It will get you back on a lunchbox.” – Doctor Strange

Doctor Strange approaches Wanda Maximoff hoping that she can help him protect America Chavez. He knows that over the years, Wanda has faced scrutiny over her actions more often than not. Wanda even assumes that Strange must have come to reprimand her for her mess in Westview. Instead, Strange seeks Wanda’s help because he knows she has magical knowledge that rivals his own. He tries to convince her that doing this will get her back in the good graces of the world, back to the wholesome public image of a good super hero. But, as so many others have done, he underestimates Wanda.

Wanda, since we last saw her in WandaVision, has fully embraced her Scarlet Witch persona. She’s willing to do whatever it takes to get her children back, even if it means hurting those who get in her way or using dangerous magic. Doctor Strange is appalled at this switch in the woman he knew, but Scarlet Witch assures him she’s doing what any mother would do.

“Do you know it’s ancient custom to bow in the presence of the Sorcerer Supreme?” – Wong

Wong not only balances Doctor Strange’s brash decisions, but he also brings much needed levity to Doctor Strange in the Multiverse of Madness. He’s always ready to counter Strange’s impulsive god complex as well as throw in a subtle jab at his fellow sorcerer. Strange often has trouble admitting when others are more capable than he is — which is why this quote from Wong is so perfect. It gives Strange the slight reality check he needs. 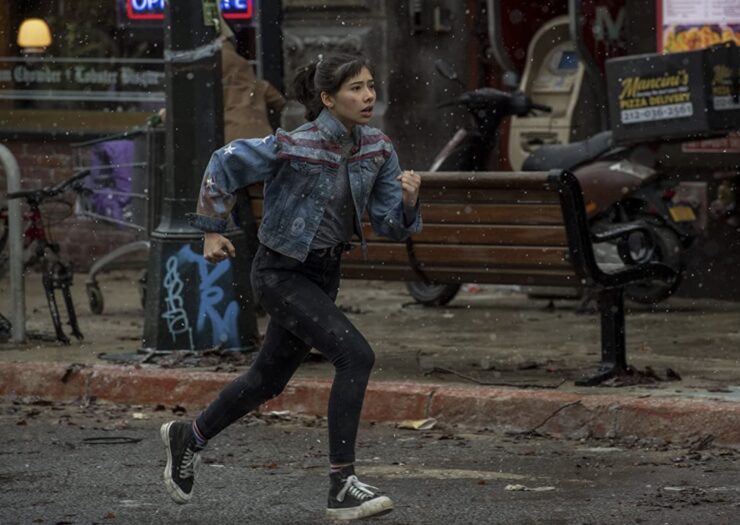 America Chavez’s first lines in the film are spoken in Spanish, and throughout she uses Spanish as a way to crack jokes and point out Strange’s occasional incompetence. But in a flashback to when her power first manifested, the use of Spanish tugs at the audience’s heartstrings. It’s a connection to her moms who were abruptly thrust through one of America’s star portals. The memory is painful for America to share, and her words are full of love, remorse, guilt, and hope — a powerful mix for a powerful hero.

The appearance everyone was waiting for: Professor X. As Doctor Strange is brought before the Illuminati, the Multiverse quickly comes crashing down. Strange must confront the past actions of his alternate self as well as the current actions of Scarlet Witch while also answering to this intimidating council of super heroes. The Illuminati do not trust any version of Doctor Strange but Professor Charles Xavier holds out hope. His words are a reference to what he says to Magneto and Mystique in X-Men: Days of Future Past. They’re a testament to putting trust in someone despite their past mistakes.

“Get the hell out of my universe.” – Captain Marvel

One of the surprise members of the Illuminati is Maria Rambeau, the Captain Marvel of her universe. Maria was last seen alongside Carol Danvers in Captain Marvel but this version of Maria wears the powerful Kree suit. As Scarlet Witch infiltrates the Illuminati’s chambers, each member of the council does their best to subdue her. Captain Carter affirms she can “do this all day” and the other members try to use each of their individual strengths. As always, Captain Marvel is a nearly unstoppable enemy, and she puts up the best fight against Scarlet Witch — though, in the end, nobody is a match for Wanda’s wrath.

“Even that led you to this moment.” – Doctor Strange

Failure can feel like a reason to stop trying, even to completely give up. America definitely feels this way when Scarlet Witch’s plan nearly comes through. After all this time, America still hasn’t even figured out how to control her star portals. Just as America’s about to give in to her hopelessness, Doctor Strange gives her a new perspective. Every mistake, every wrong portal, led America to this exact moment. Everything before now is a tool to use in the current situation.

“I can’t beat you so I’ll give you what you want.” – America Chavez

Now that she is free from the weight of her past, America can see more clearly. And that’s exactly when she figures out how to beat Scarlet Witch. Whereas the other super heroes only used brute force against Scarlet Witch, America sees another way. The only way that Scarlet Witch will realize her mistakes is if she is forced to come face to face with them. So, America gives Scarlet Witch exactly what she wants — a portal to her boys, Billy and Tommy. From there, everything works out exactly as it should because America thinks like a new generation of hero, relying on more than just her power to get the job done.

“I love you. I love you in every universe.” – Doctor Strange

We’ve learned from What If…? that certain events and characteristics hold true throughout the Multiverse. No matter which alternate universe or variant is on screen, some things stay the same — the bravery of the Captains, the compassion of Black Panther, even Doctor Strange’s arrogance. However, one of the strongest constants throughout the Multiverse is the love shared between certain characters. In the quote above, Stephen confirms that his love for Christine would persist in any universe, for any version of her.

With the possibilities of the Multiverse only beginning to be explored, who knows what’s next for the MCU’s Phase Four. As 838 Christine says, it’ll definitely be one hell of an incursion as these multiverses continue to intersect.

What was your favorite quote or moment from Doctor Strange in the Multiverse of Madness? Tell us in the comments and don’t forget to Let Your Geek Sideshow!