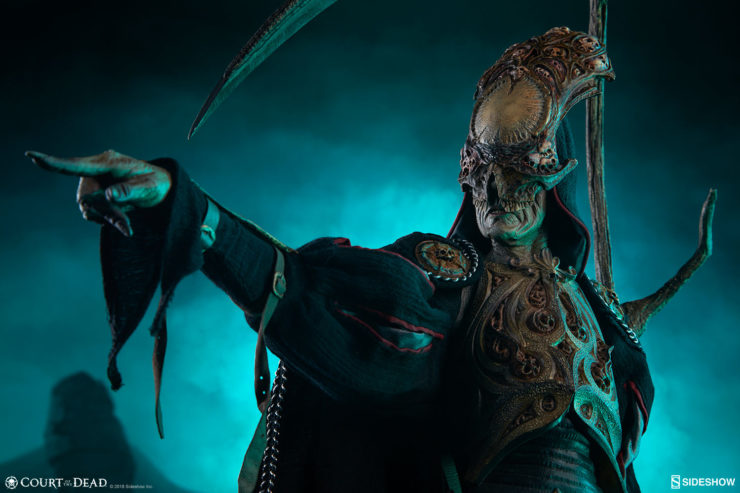 The universe is cruelly imbalanced. All of existence is mired in an endless battle between Heaven and Hell, waged for longer than anyone can remember.

The war machines of both celestial realms turn on power stolen from mortal souls. Death himself is enslaved by the singular task of harvesting the dead, yet he yearns for a more noble purpose.

Compelled by the plight of the mortals, Death creates the Court of the Dead. This unlikely council is intended to spark his rebellious ambition to set in motion a daring plan to end the war.

Facing the forces of Heaven and Hell will not be easy. Death and his allies must not only defeat those mightier, but also tame their own destructive nature.  To achieve their noble goal of peace and balance, they will have to…

Court of the Dead is a Sideshow original dark fantasy and horror property created from the mind of Tom Gilliland. This world has inspired statues, figures, art, comics, and more—including our brand new celebration: Court of the Dead Day! What’s that, you ask? Well, dear mourner, we’re here to teach you.

What is Court of the Dead Day?

On Friday, February 19, the Underworld will be making its way to your world, the Mortal Realm! Think of it as a reversal of Shard, who is the only living mortal to trespass in Illverness. To celebrate, we’re bringing you live content, game shows, giveaways, product discounts, and Sideshow rewards.

Registration for the even starts on Friday, February 2/12. When you register for the event HERE, you gain automatic entry into the grand prize pack as well as a $5 reward code. Registration is completely free and gives you access to exclusive opportunities as a part of the macabre festivities. 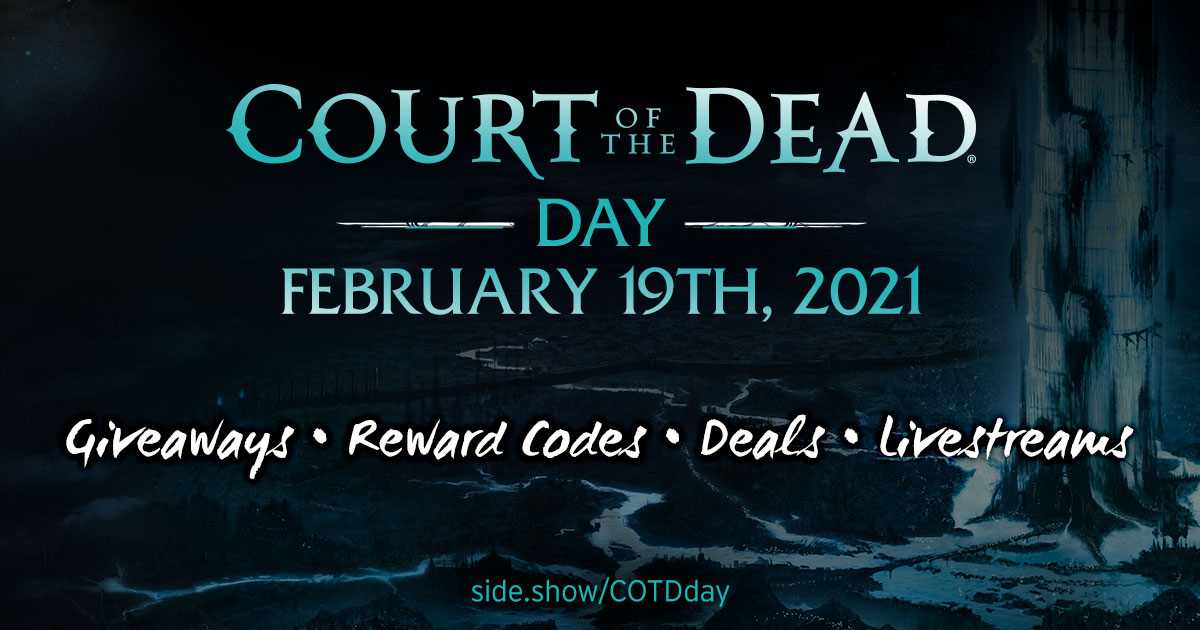 Join us for Court of the Dead Day on February 19 for Livestreams, Rewards, Giveaways, Deals, and More

There will be tons of giveaways going on across our social platforms as well as in the Facebook groups.

The grand prize of the whole event includes:

Additionally, during Court of the Dead: Alive From The Underworld!, viewers will have the chance to win an ultra-rare, exclusive illustration from the upcoming book Rise of the Reaper General. Signed by Tom Gilliland and artist Rachel Roubicek, this is an 11″ x 14″ print numbered 1/1. 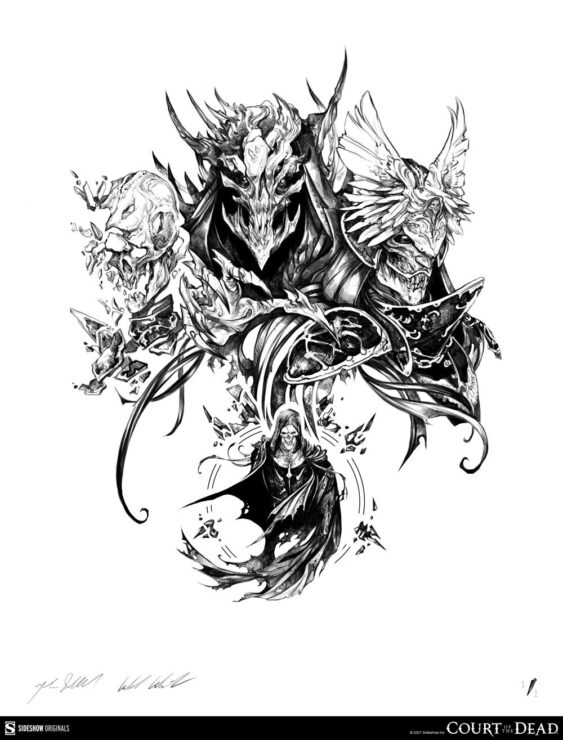 While we won’t tell you exactly what’s being given away elsewhere, you can expect to see some regal Premium Format™ Figures, rare collectibles, and crypt-bound creatures.

To help bolster your chances, you should follow Sideshow and Court of the Dead, click those notification bells, and get those alerts!

Join Court of the Dead…

You can view the terms and conditions for Sideshow contests at side.show/contest.

As a part of the frightful festivities, fans have the opportunity to claim a free PDF download of the Court of the Dead original short story Conscientia Infinitum, introducing mourners and mortals alike to the Great Oracle Ellianastis. 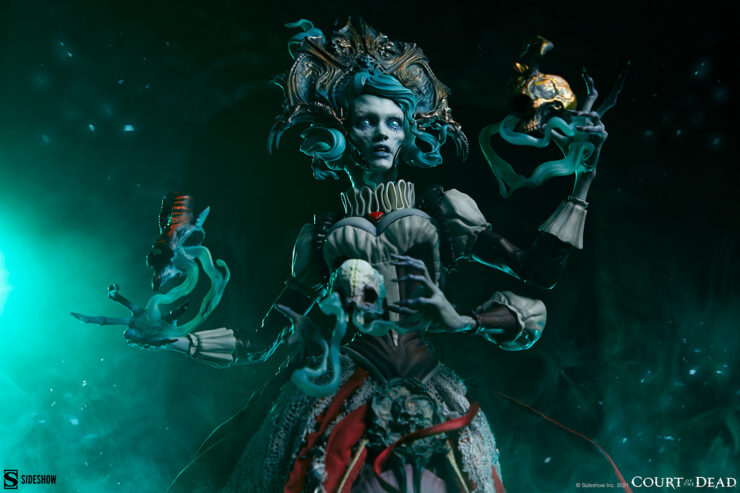 Embark on the path of Spirit with this new glimpse into the Underworld, written by Sideshow’s own Amy Chase (The Comics Haul with Amy and Paul) and illustrated by Abigail Larson (Court of the Dead: Dark Harvest).

The first event of the day is a LIVE discussion of the gaming side of Court of the Dead, including a closer look at Court of the Dead Mourner’s Call (Kickstarter Edition), an epic board game by Project Raygun. This stream will be hosted by Amy Chase, and viewers will also be able to enter for a chance to win their own Kickstarter Exclusive edition of this game!

Then, we’ll have Court of the Dead: Alive from the Underworld. This livestream event features exciting gameshow content like Win, Lose, or Die as well as videos about Court lore, behind-the-scenes information and interviews, and other looks into this rich world that you won’t want to miss! Plus, there will be some teases for what releases lie ahead in the world of Court of the Dead.

Join Andrew Ceco in the Rise, Conquer, Rule Facebook Group in the afternoon for a Faction Quiz walkthrough and discussion about the Underworld.

Finally, anticipate some familiar faces in our Instant Giveaway, Cobbled Cosplay, 100% Promo Hunt, and Friends With No Benefits shows throughout the day.

During this special livestream, we will announce when a mystery treasure has been hidden on our website; these will take the form of an extremely limited 100% off promotional code on a random collectible that only the fastest handful of people will be able to claim.

If you find the code and are able to redeem it, you are still responsible for paying shipping, but this special opportunity is open to domestic and international collectors.

The game shows include Cobbled Cosplay and a scary-good episode of Win, Lose, or Die. You can enter for your chance to be a contestant on one of these shows HERE. Need more information? Here’s a breakdown of each game.*

*Please note: If you are chosen, you do not get to choose specifically which gameshow you will be in. 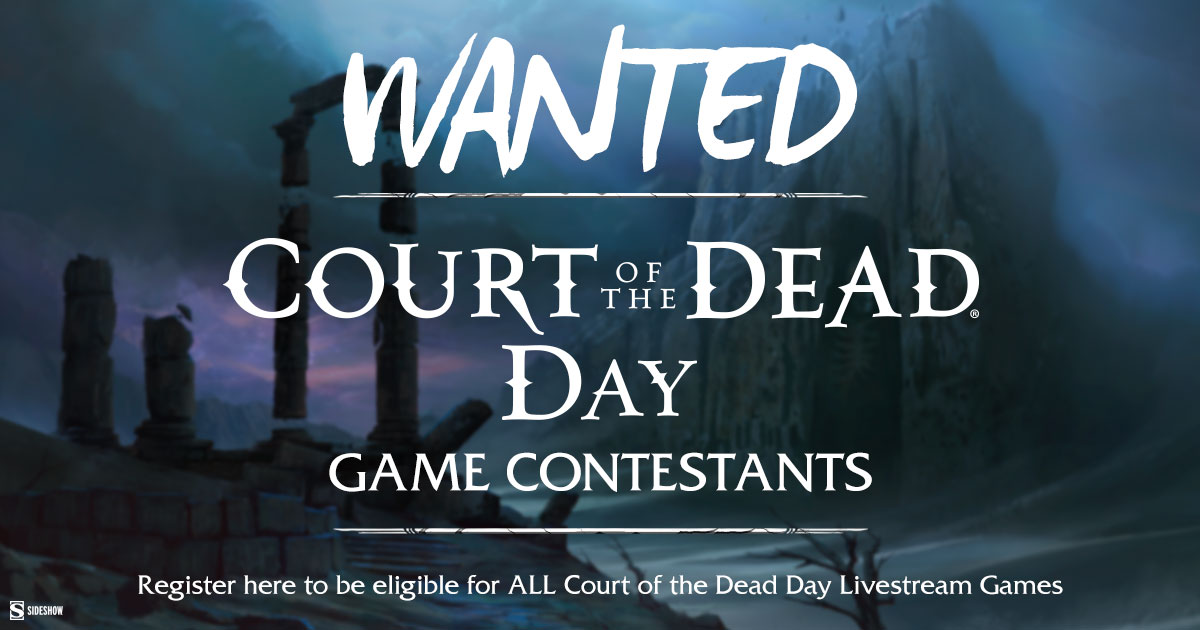 If you love costumes, makeup, and watching people stress out over time constraints and fashion faux-pas, Cobbled Cosplay is the one for you. Contestants will play by proxy, aligning themselves with one of our two cosplayers, Amy Chase and Andrew Ceco, one of whom will be crowned Court of the Dead Cobbled Cosplay champion!

The winner will take home a Court of the Dead prize, but to find out which one, you’ll simply have to discover what’s at stake when you watch.

If you like Dungeons and Dragons and horror stories, Win, Lose, or Die is the one for you! This is a cutthroat Choose Your Own Adventure style game that results in somebody either going home with all the glory (an amazing prize!) or DYING (losing their shot at the prize). You have to make it through all ten steps of the game to reach the final step, so, if you die, someone will take your place and you’ll be gone for good.

We did say cutthroat, remember?

The game will be hosted by Andrew Ceco, sharing an original story called A Thornless Rose.

If any or all of these game shows sound fun to you, you can register for a chance to play—and a chance to win—during Court of the Dead Day here.

Players will have to carefully adhere to the instructions to claim their spot. You may also get chosen as a runner up or alternate, not a main player. If you are selected as an alternate, the best way to improve your chances to actually play is by following instructions carefully.

We look forward to playing with you!

*All times listed in PST 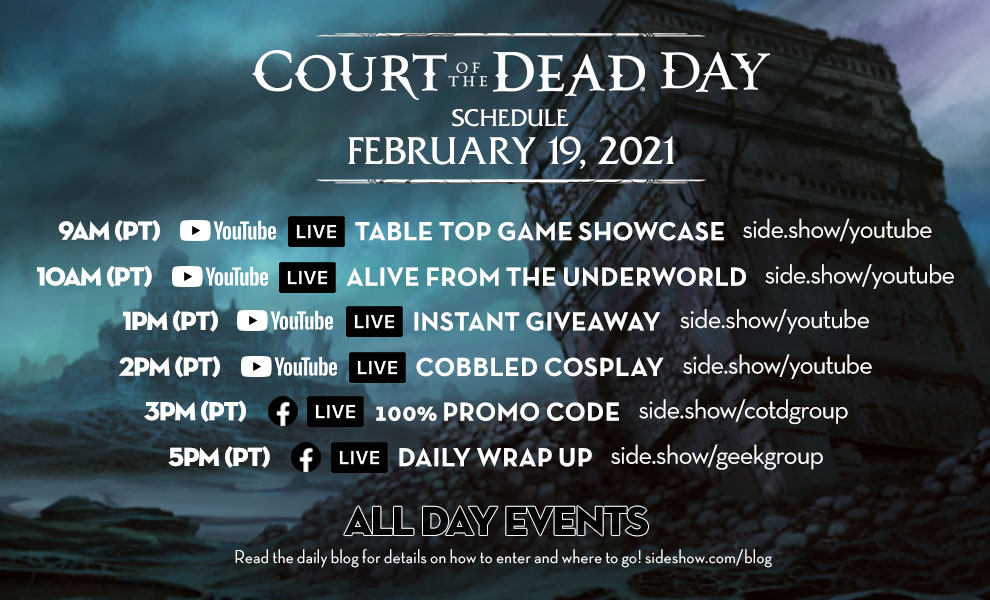 Interested in exploring the Underworld? Remember to register HERE for Court of the Dead Day and follow us on social media.

And if you want to brush up on your Court of the Dead knowledge before the big day, be sure to watch School of the Dead, an episodic video essay series chronicling the characters and content from this expansive world. A new episode drops every Friday.

Let us know your Faction in the comments and what you’re most looking forward to about Court of the Dead Day. And remember, mourners—only with the Underworld United can we RISE, CONQUER, and RULE!