DC Comics is home to the stories of Wonder Woman, Superman, The Flash, and more! Nearly every character that we follow has unique powers or abilities that enable them to become superheroes. But what about the characters that aren’t super? Do you only qualify as a hero if you’re born on a distant planet where everyone has earth-shattering strength? Absolutely not. In fact, some of the greatest heroes don’t have powers at all.

These are just a few of the best DC Comics characters without powers. 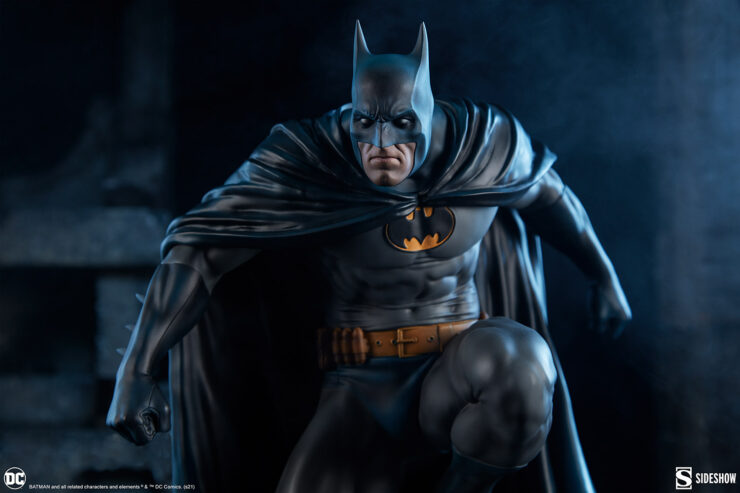 Bruce Wayne was born into a life of privilege — his father, Dr. Thomas Wayne, was a surgeon, and his mother, Martha Wayne, was a socialite. Both his parents were well-known philanthropists in Gotham City. Their wealth was abundant, their influence was inescapable, their connections were numerous. However, the Waynes still tried to give Bruce a normal childhood, clear from all the complications of their lives. But when a random street thug named Joe Chill killed Thomas and Martha, Bruce spiraled down a long and dangerous path.

He trained and studied extensively so that he could become Gotham’s Dark Knight. The city needed a protector who could fend off the increasingly terrifying criminals, from The Joker to Mr. Freeze and beyond. So he donned his signature cowl and became the Batman. He pushed himself to his limits, and with the help of his butler, Alfred Pennyworth, he fights to protect all Gothamites.

Batman is an extremely adept martial artist. Despite having human strength, he is able to go toe to toe with formidable supervillains due to his ability to adapt. His arsenal of gadgets is unmatched, and with the wealth of Wayne Enterprises behind him, he’s able to constantly research and develop new technologies. Nothing is out of his grasp. And if he can’t understand or create new technology, he can hire someone to do it for him.

His greatest asset is his extreme preparation for nearly every situation. Even as a founding member of the Justice League, he has diligently found each and every members’ weakness so that he can defeat them should they be mind controlled or simply turn evil. He even recorded a method of defeating himself, should he be turned against the team. 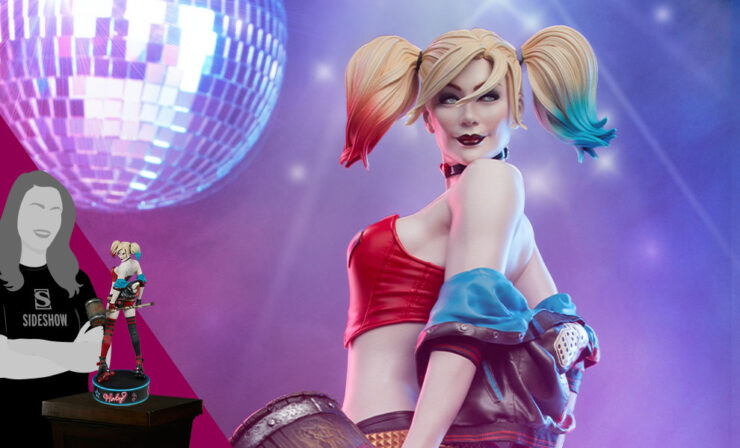 Dr. Harleen Quinzel was a talented psychologist. She focused on the most twisted and demented of minds but one especially fascinated her: Gotham’s most terrible villain, The Joker. Perhaps it was her dedication to work or perhaps it was her compassion, but when she found herself face to face with The Joker himself, she was unexpectedly captivated. The Joker subjected her to similar chemicals that had changed his own appearance and mind. She then joined him in his maniacal villainy and terror.

In multiple story arcs, Harley Quinn realizes that The Joker is manipulative and truly beyond help. She painfully rips apart her attachment to him and often aligns with Batman. Perhaps she’s more of an anti-hero, but in the end it always seems that she turns away from The Joker and uses her knowledge of his operation to help Gotham for good.

Harley Quinn is an incredible psychologist, with the ability to understand the minds of nearly every villain in Gotham. On top of that, she’s an indispensable intelligence asset because for many years she worked alongside those same villains. She is extremely acrobatic, even being able to keep up with Nightwing at some points.

Still, her greatest strength is her compassion — Harley Quinn effortlessly connects with people (as a psychologist) and even with animals, mostly notably her pet hyenas Bud and Lou. 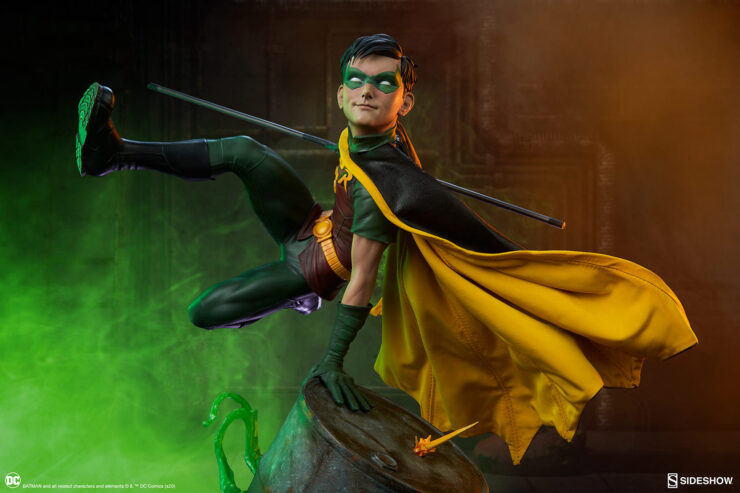 There have been multiple Robins through the years. The first, and perhaps the most well known, is Dick Grayson. Dick Grayson was part of the gravity-defying family circus act called the Flying Graysons, but when his parents were murdered, Bruce Wayne took Dick Grayson under his wing. He trained him to fight crime and solve mysteries just as well as any detective in the world could. Eventually, he became Nightwing, and there were many Robins to follow.

Another well-known Robin is Bruce Wayne’s biological son Damian Wayne. Damian was raised by his mother, Talia al Ghul, as a member of the League of Assassins. He is more brutal, more aggressive, and more arrogant than any of the other sidekicks Batman has ever had.

All Robins have benefited from Batman’s gadgets and training. Even though none of them have powers, each Robin has a different strength. Dick Grayson is a proven leader and one of the most lighthearted Robins of all. Jason Todd was brought back to life by the Lazarus Pit and now the greatest precision of all the Robins as The Red Hood. Batman believes that Tim Drake is even smarter than him. And of course, Damian Wayne is the most agile of them all.

And each Robin has one strength in common: They care about their family. This doesn’t always mean their biological family, but rather their found family that fights alongside them in the name of justice. 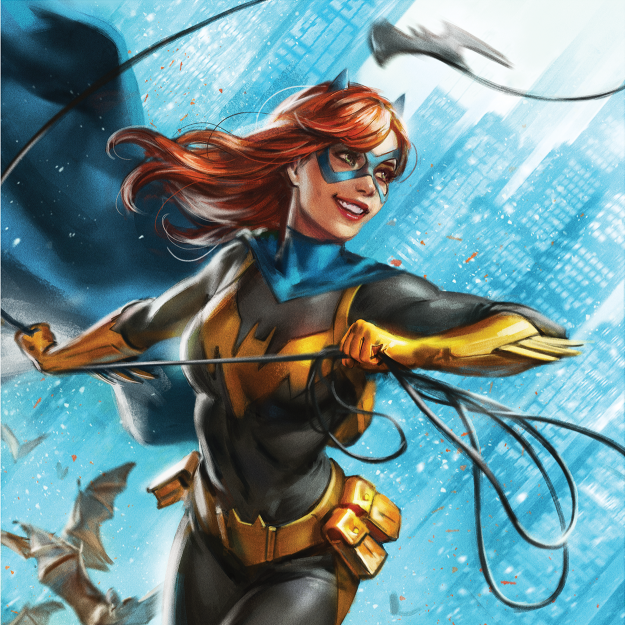 Barbara Gordon is the daughter of Gotham City Police Commissioner James Gordon. She observed all the problems in her city that weren’t being fixed by the cops and also saw the larger corruption at play. Instead of following in her father’s footsteps, she drew inspiration from the sky: Batman. She donned a cowl and cape and fought crime far before Batman trained her. After her training, she only became more of a threat to Gotham’s criminals than she had been on her own. It was then that The Joker shot her in the spine.

And though she could not move her legs, Barbara did not stop in her fight against Gotham’s criminals. She became Oracle and trained herself in computer science. With her skills, she was the most technologically advanced hacker in Gotham City, perhaps in the world.

As Batgirl, Barbara Gordon is able to adapt to nearly any situation faster than most of the Bat-Family. She works efficiently and powerfully, and at the same time she exemplifies the old phrase, “Work smarter not harder.” She has a perfect eidetic memory, allowing her to recall anything she sees or hears and process that information at lightning speed.

As Oracle, she is by far one of the greatest behind-the-scenes operatives. In fact, there are multiple government organizations that ask her for hacking help on nearly a daily basis. No one works through code as well as Barbara. She led the Bat-Family for quite a while as Oracle because she could use her technology and intelligence to effectively stop crime in Gotham. 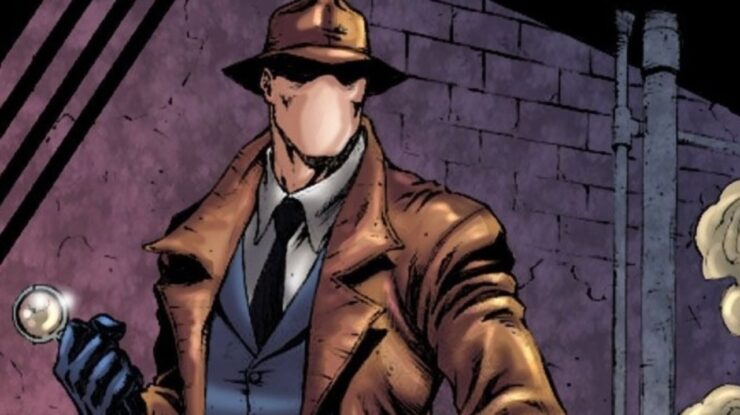 Vic Sage was once an investigative journalist with a TV show of his own. He had relative fame and fortune, but he was unsatisfied. There were mysteries that could not be solved legally and Sage, only the slightest bit insane, had more interest in the mysteries than the laws of investigations. So he donned a mask of Pseudoderm, which hid all of his famous features, and allowed him to conduct investigations anonymously.

Eventually, his detective skills were noticed by the greatest detective in the world, Batman himself. That got him into the Justice League. And despite having no powers, he could even talk down Superman.

The Question is not as agile or combat ready as the Bat-Family, but he is all the more determined to solve his cases. He is a master of disguise, using masks to blend in anywhere, not just to keep him anonymous. He is a world-class journalist, even when he’s not on TV. And his ability to manipulate a situation through conversation alone makes him an important asset to the Justice League. 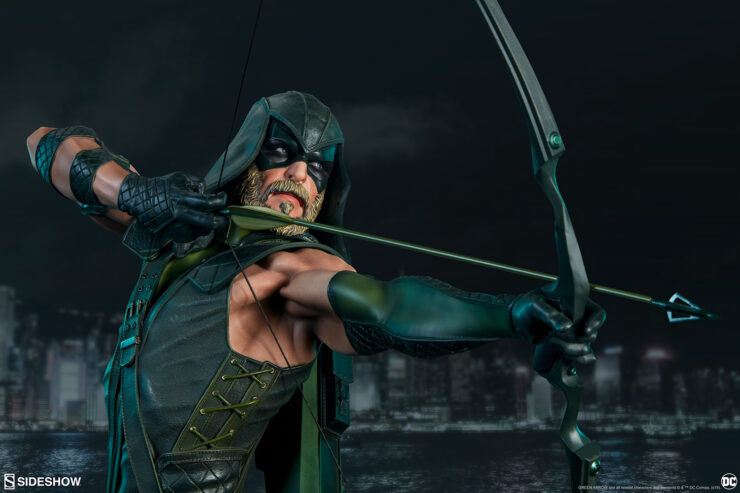 As a young man, irresponsible playboy Oliver Queen got caught in a storm and washed up on an island. He fought to survive, and had to learn how to hunt and scavenge. It turned out that he wasn’t alone on the island, and suddenly his survival skills were more important than ever. Some of the people on the island hoped to help him, some of them hoped to kill him. Sometimes the line between the two was impossibly thin.

When he finally returned to his home of Star City, he decided to put his skills to good use and become a crime fighter. Just like Batman, his wealth is a resource that provides him with ingenious technology, such as the famous boxing glove arrow.

Green Arrow is an expert marksman. He never misses a shot. His precision allows him to pinpoint specific pressure points and even specific nerves so that his arrows don’t kill only incapacitate. His intuitive understanding of physics allows him to ricochet arrows to hit targets that aren’t even in sight.

He can track down nearly any target using his ability to hunt. He is extremely stealthy and acrobatic. And if his love for Robin Hood doesn’t show through, don’t worry, he’ll probably make a joke about it soon enough. He is one of the most lighthearted characters in the Justice League.

Who is your favorite DC Comics hero without powers? Let us know in the comments, and don’t forget to Let Your Geek Sideshow!