There are so many powerful heroes and wicked villains to choose from in DC Comics that, at first, you might be overwhelmed. As gift-giving season approaches you could be thinking, “How will I ever choose?”

Well, fear not, DC fan (or someone who knows a DC fan)! This Gift Guide will walk you through some of the best options for Justice League statues, Premium Format™ figures, DC super-villain statues, and more! When we’re talking about the larger-than-life characters of DC, there’s only one way to put them in your collection — and that’s in larger-than-life form! 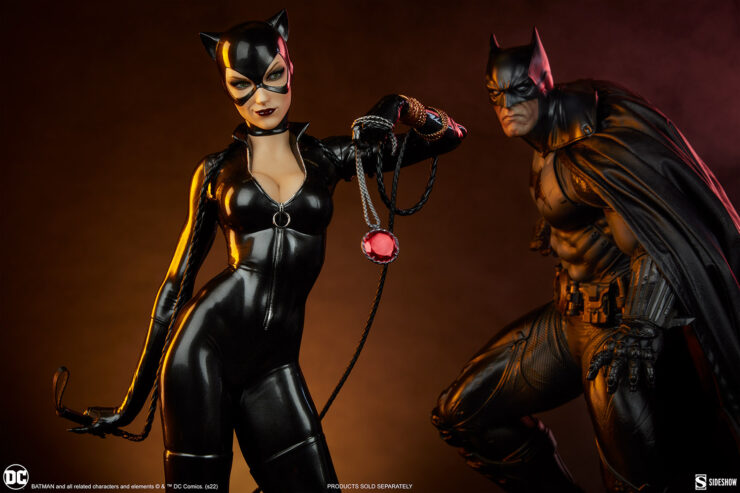 If anyone can steal her way into a coveted collection, it’s Selina Kyle. Also known as Catwoman, Selina has stolen not only priceless treasures and encrypted info, but also the heart of Batman. The Catwoman Premium Format Figure shows the best thief in the world with her newest prize: a valuable gem from the vault of Bruce Wayne. With this graceful kitty in your display, there’s no telling what hijinks might occur. Everyone knows of the fateful Gotham City night that forged the Dark Knight. Bruce Wayne was consumed by fear but he turned that fear into vengeance. But, what if, instead of fear, young Bruce had turned to anger instead? The Grim Knight from the Dark Nights: Metal comic series shows a Batman who has given in to his rage.

This terrifying Grim Knight Statue by Prime 1 Studio shows Batman with a masked cowl and interchangeable weapons. Plus, the base includes The Batman Who Laughs, who recruits the Grim Knight to be his grisly right hand. 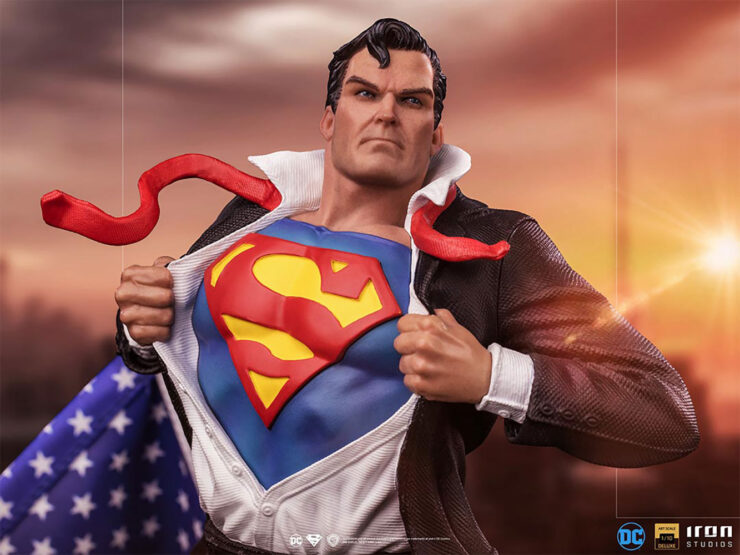 Clark Kent embodies the enduring hope and unbreakable strength that many only dream of possessing. He is a defender of the defenseless and a protector of the oppressed. He’s Superman.

The Clark Kent Deluxe 1:10 Scale Statue by Iron Studios captures the super hero mid-transformation, shedding his unassuming Clark Kent persona to save the day as Superman. Add this inspiring statue to your collection for a bright spot of hope. 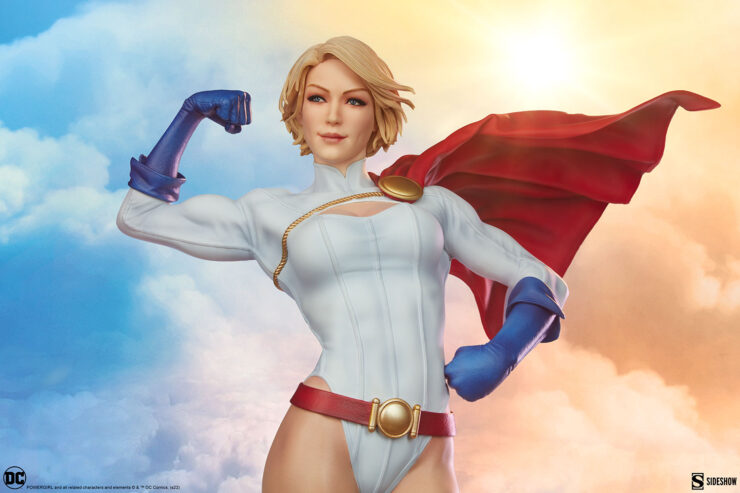 Kara Zor-L, AKA Power Girl, hails from Earth-Two but she’s ready to defend any Earth in the Multiverse! This impressive Power Girl Premium Format Figure shows her immense strength as a plume of swirling clouds are left in her wake. She’s poised to soar through the air and strikes a confident power pose that only Power Girl could pull off! 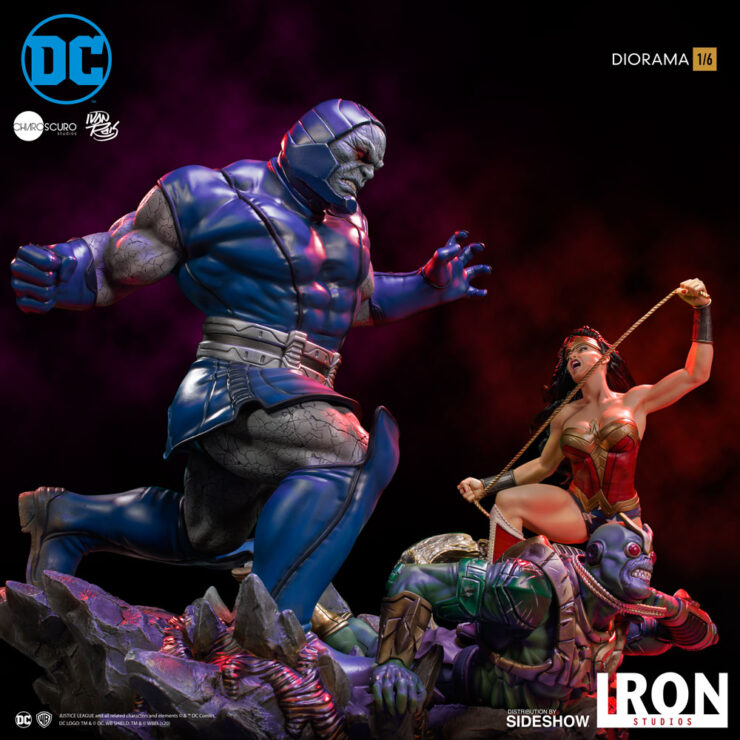 Darkseid is one of the Justice League’s most treacherous opponents. His intellect and power are matched by few and it often requires the efforts of the entire team to take him down. But if anyone has the strength and bravery to face him on their own, it’s Wonder Woman!

In the Wonder Woman vs. Darkseid Sixth Scale Diorama by Iron Studios, Wonder Woman readies an attack with her Lasso of Truth while Darkseid attempts to survive the Amazon’s righteous wrath. 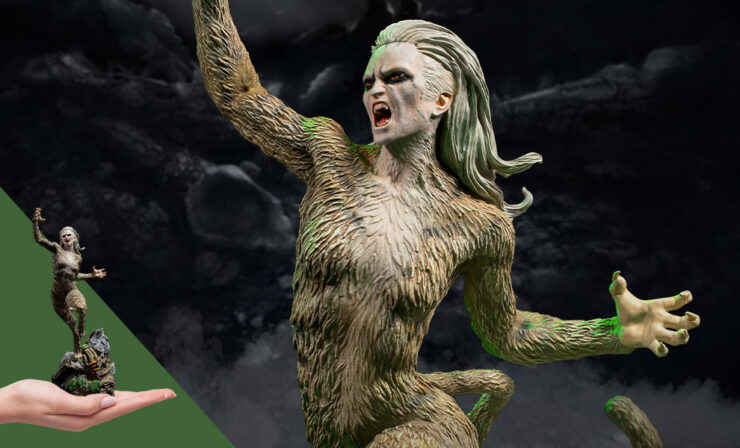 Every super hero needs a bitter rival to challenge them. For Wonder Woman, she has Cheetah. Once a promising scientist in the fields of geology and cryptozoology, Barbara Minerva finds herself transformed by the Goddess of the Hunt. And with this new look comes a whole set of powers, including super speed and sharp claws. The Cheetah Statue by Iron Studios is the perfect companion to a Wonder Woman Deluxe Statue. Of all the members of Batman’s Rogues Gallery, perhaps Mr. Freeze’s story is the most tragic. Long ago, Dr. Victor Fries merely wanted to cure his wife Nora from a devastating disease. Sadly, a horrific lab accident caused him to need his sub-zero suit to survive. Since then, Mr. Freeze’s resolve has been cold as ice.

The Mr. Freeze Statue by Iron Studios showcases the super-villain’s astounding suit, which keeps him alive and also inspires his dangerous weapons. Mr. Freeze stands ready with his ice ray gun, poised to blast any who stand in his way. 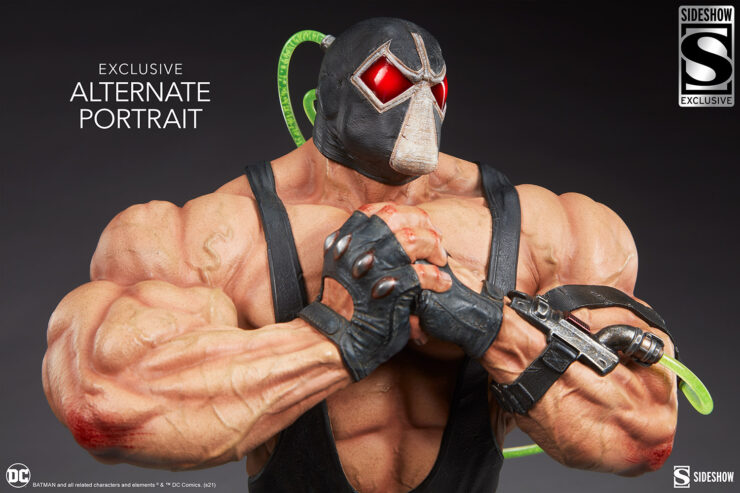 Few of Batman’s enemies have ever broken him quite like Bane once did. Though he’s first thought of as a man of muscle, Bane’s strength is also his mind. Before he infamously broke Batman’s back, Bane first broke his spirit. No Batman collection could ever be complete without The Joker. These two figures have always danced under the moonlight, chasing each other and inspiring the other to give in to their darkest qualities. It’s a rivalry that defies all expectations.

The Joker Premium Format Figure shows the Clown Prince of Crime at his most insane. As he precariously bounces toward mayhem atop his carnival-themed pogo stick, The Joker’s portrait features his signature grin. He’ll have you dying from laughter in more ways than one. 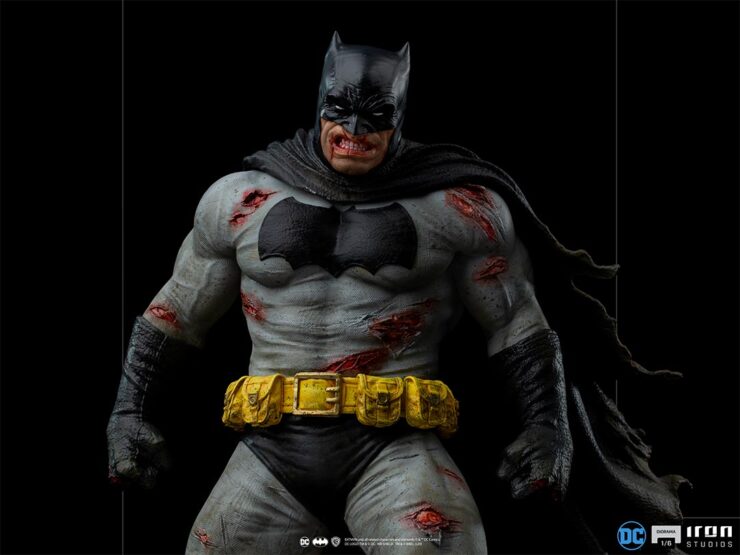 Batman has fought against his fair share of grotesque villains, like Clayface and Killer Croc. But the Gang Mutants really take first place when it comes to stomach-churning enemies for the Dark Knight.

Inspired by the iconic style of Frank Miller’s acclaimed book, the Batman: The Dark Knight Returns Diorama by Iron Studios is a must-have for collectors. Batman snarls in his black, gray, and yellow suit as he stands atop a member of the Gang Mutants, both covered in blood and looking ahead to the next fight.

Which of these mighty DC statues will you be adding to your display? If you’re still unsure which collectibles to select, take out the guesswork of gifting with the Sideshow Gift Card. Available as a physical or digital gift card, it’s the gift everyone will love. Plus, there are plenty more Sideshow Gift Guide categories to browse!

Connect with other DC fans in our Let Your Statue Sideshow Facebook Group, and don’t forget to Let Your Geek Sideshow!

POLL: Which DC Super Family Would You Join?