Inspired by Christopher Nolan’s The Dark Knight trilogy, Sideshow and Hot Toys present a stunning sixth scale collectible vehicle that can be paired with the Batman: The Dark Knight Rises figure (sold separately) to recreate the dynamic action from these classic DC Comics movies.

Check out a closer look at the new Batmobile below as well as all the specs on Batman’s most trusted mode of transportation.


“The Tumbler? Oh, you wouldn’t be interested in that.” – Lucius Fox

This new collectible vehicle is the ultimate addition to any Batman collection. Staying true to the iconic, military-grade design first seen in Batman Begins, the highly detailed collectible is crafted with extreme precision and outstanding painting applications. A perfectly scaled design is complemented to fit with the sixth scale Batman figure so that the Dark Knight can maneuver his vehicle through the dangerous streets of Gotham (and your collection).

Mechanical details are found throughout its interior and body, with features like LED light-up functions rotatable rubber tires, articulated break flaps, and a slide-open roof panel so that the Batmobile can mirror every sharp turn and high-speed chase from the film.

Lucius Fox’s genius craftsmanship is evident from front to back in the most heavily armored version of Batman’s vehicle to date. Batman doesn’t take any chances when speeding through the gritty side streets and back alleys of his city, so neither should you. And it definitely comes in black. 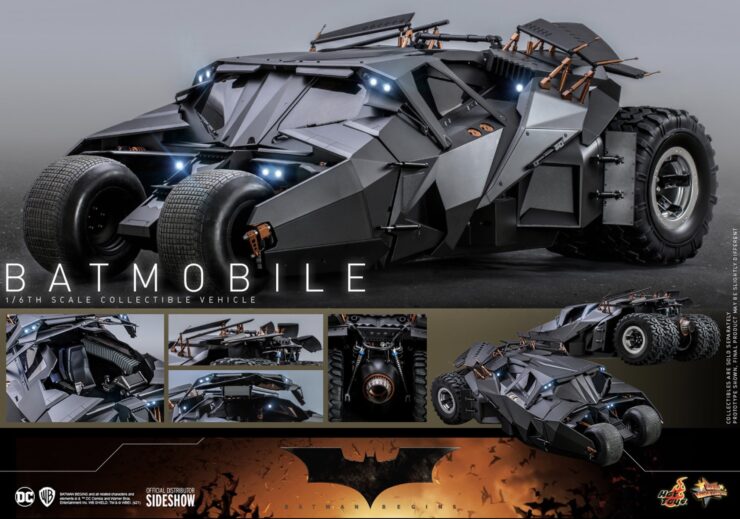 As you build your Batcave of Wayne Enterprises tech, there really are so many Bat gadgets to consider. One of the most versatile options in Batman’s arsenal is The Bat-Pod, available for shipping now. In addition to Batman’s hardy tank of a Batmobile, he also frequently uses his Bat-Pod when the situation calls for a speedy solution. The Bat-Pod was heavily featured in The Dark Knight during Batman’s showdown with The Joker. Catwoman has also been known to steal a ride or too, on the Bat-Pod — just don’t tell Bruce.

And of course, there’s always the man behind the mask, The Batman: The Dark Knight Rises Sixth Scale Figure, coming soon to Sideshow! With Batman at the helm, his Tumbler becomes a formidable weapon against Gotham’s fearsome villains. Nobody gets away from the Batmobile’s swift brand of vengeance. For more information about Hot Toys’ sixth scale Batman, check out our first look blog here.

Are you ready to take control of the Batmobile? Let us know in the comments and don’t forget to Let Your Geek Sideshow!

The Most Iconic Quotes from The Godfather Trilogy