When one thinks of the most important peers in Harry Potter’s life, Ron Weasley and Hermione Granger are naturally the first characters that come to mind. Just as important as his loyal friends, however, is Harry’s constant antagonist and adversary, Draco Malfoy.

Harry and Draco’s distaste for one another leads to some of the most iconic and memorable moments over the course of the eight Harry Potter movies. Here are our top 10 moments between the two students.

10. Haunted Taunting – Harry Potter and the Prisoner of Azkaban

Draco and his companions find Hermione and Ron outside the Shrieking Shack. Never ones to miss an opportunity to bully others, the three Slytherins seize the opportunity to engage in some mean-spirited taunting. Unbeknownst to them, Harry was nearby under the Cloak of Invisibility. Harry leverages his invisibility and the Shrieking Shack’s haunted reputation, dragging Draco toward the shack. The Slytherins flee in fright as Hermione and Ron laugh. Harry relishes in every chance he gets to put bullies, especially Draco, in their place.

9. Quidditch Match – Harry Potter and the Chamber of Secrets 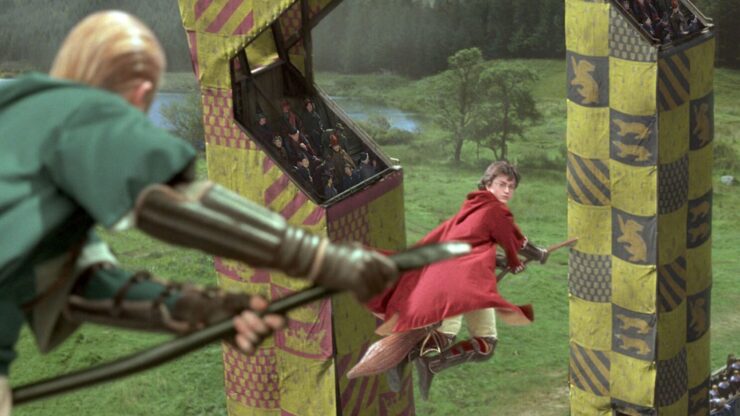 Gryffindor and Slytherin face off on the Quidditch pitch, with Harry and Draco as their respective Seekers. With his Nimbus 2001 and a rogue Bludger out for Harry, Draco is not as easy to beat as one might expect. The two Seekers race for the Snitch, checking one another as they soar on their brooms. Despite the odds and heightened stakes, Harry catches the Snitch and wins the game for Gryffindor. The two young wizards take the match even more seriously given their disdain for one another.

8. Broken Nose on the Hogwarts Express – Harry Potter and the Half-Blood Prince

As usual, Harry is convinced that Draco is up to something. Using his Cloak of Invisibility, Harry sneaks into Draco’s cabin aboard the Hogwarts Express to eavesdrop. Draco lingers for a moment while the other students disembark from the train, recognizing that something is amiss. He casts a full body-bind curse and finds Harry on the floor. Draco breaks Harry’s nose and covers him back up with the Cloak of Invisibility before departing. Harry is only spared a trip back to King’s Cross Station thanks to Luna Lovegood and her Spectrespecs. Although Harry’s intentions were in part good, the two boys often find themselves at odds as they both make questionable choices when the other is involved.

7. Detention in the Forbidden Forest – Harry Potter and the Sorcerer’s Stone

Harry, Hermione, Ron, and Draco all receive detention for being out of the castle after dark. They are told that they will serve their time with Hagrid, who has business in the Forbidden Forest. The children are understandably frightened to go into the forest after all the warnings they were given at the beginning of the year. Hermione and Ron go with Hagrid, while Harry and Draco are paired together with Hagrid’s loving-but-cowardly dog, Fang. Harry and Draco bicker as they make their way through the woods, only stopping when they come across a shadowy figure drinking blood from a fallen unicorn. Draco runs away screaming while Harry is eventually rescued by the centaur Firenze. When faced with an actual enemy, their childish bickering comes to a sudden halt.

The first-year students gather in the courtyard for their flying lessons with Madam Hooch. Neville Longbottom quickly loses control of his broom and breaks his arm. Giving clear instructions to stay on the ground, Madam Hooch escorts Neville to the school nurse. Draco finds Neville’s Remembrall and takes to the skies on his broom. Harry tells him to give it back and Draco challenges him to come get it. Hermione insists Harry stay on the ground as they were told, but Harry disregards her warnings. Draco throws the Remembrall and Harry races to catch it. In their first year, Draco is already adept at getting under Harry’s skin; Harry also clearly enjoys putting Draco in his place. 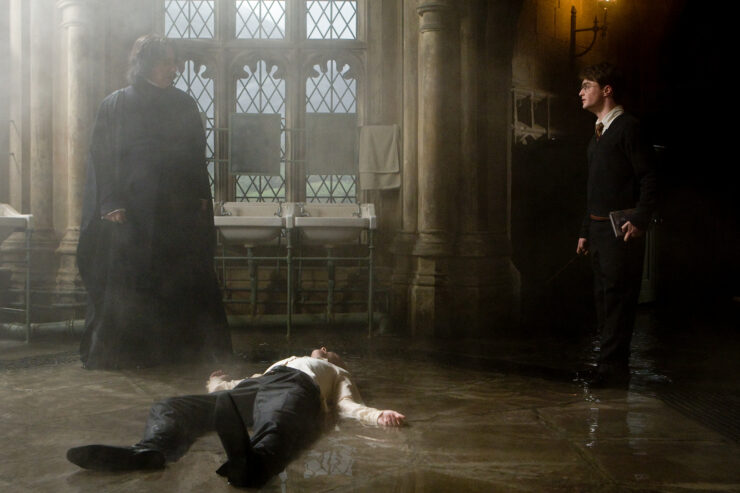 Harry has spent the better part of his sixth year at Hogwarts suspecting Draco of being up to something. Harry confronts a weeping Draco in the lavatory about Katie Bell’s recent hexing. The two boys exchange spell fire. Harry casts a spell he read about in his old Potions book, shouting, “Sectumsempra!” Draco’s spellcasting ceases immediately. Harry finds him on the floor, bleeding out. Harry freezes in shock as Professor Snape comes in and reverses the curse. Although Harry was right about Draco being responsible for the hex, confronting Draco and casting a curse with unknown consequences was reckless. Despite their obvious differences, they share a knack for getting in over their heads on a regular basis.

The first-year students gather outside the Great Hall waiting to be sorted. Draco pompously introduces himself to Harry, which Ron finds funny. Draco notes Ron’s “red hair and hand-me-down robe,” surmising that he is a Weasley. Draco tells Harry that he should not be making friends with the wrong sort of wizard. He extends his hand to Harry, saying, “I can help you there.” Glancing at Draco’s outstretched hand, Harry retorts, “I think I can tell the wrong sort for myself, thanks.” And thus, with Draco’s arrogance and Harry’s snide remark and rejection, their multi-year rivalry began.

3. The Duel – Harry Potter and the Chamber of Secrets 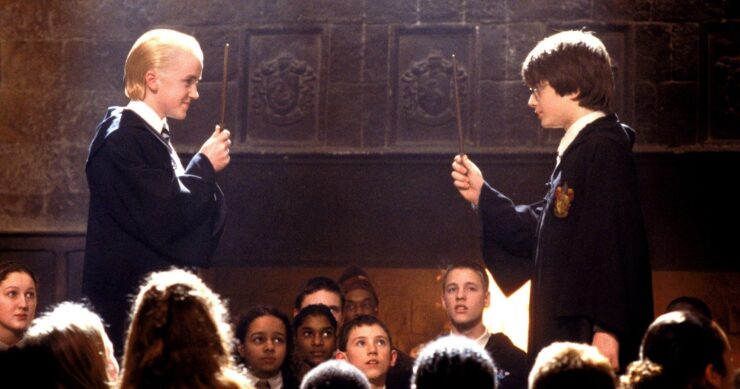 Professor Lockhart gathers the second-year students in the Great Hall to teach them how to duel. Harry unintentionally volunteers, and Professor Snape selects Draco to be his opponent. Draco and Harry’s contempt for one another gets the best of them as the two boys blatantly ignore the clear directions to only disarm one another. Launching multiple offensive attacks at one another, the duel only comes to a close when Harry unwittingly speaks in Parseltongue to the snake Draco conjured. Draco and Harry once again use the scholastically sanctioned challenge to express their scorn for one another.

Harry, Hermione, and Ron are surrounded by Snatchers. Thinking quickly, Hermione casts a stinging jinx on Harry to temporarily disfigure his recognizable face. The lead Snatcher can still make out part of Harry’s distinct scar and brings the trio to Malfoy Manor. Harry is brought before Draco and his parents, and Aunt Bellatrix encourages him to say whether or not they have Harry Potter in their custody. Draco stares into Harry’s eyes, and undoubtedly recognizes both Hermione and Ron. Despite almost certainly knowing that it is Harry, Draco does not positively identify him, ultimately saving his life. Even with their troubled history, Draco will not be the deciding factor in his classmates dying at the hands of Voldemort.

Harry, Hermione, and Ron enter the Room of Requirement where they are confronted by Draco, Goyle, and Blaise. Hermione disarms Draco, and Goyle tries to kill her in response. Ron chases after the Slytherins as Harry and Hermione locate the next horcrux. Ron comes running back to his friends screaming with Fiendfyre, conjured by Goyle, chasing after him. The trio locate brooms and take flight to escape the magical blaze. Harry hazards a glance back, catching sight of Draco and Blaise stranded and surrounded by fire. Harry turns around to pull Draco onto his broom and with fire licking at their heels, they all escape. Just as Draco ultimately saved Harry’s life by not identifying him at Malfoy Manor, Harry could not allow Draco to die in the Fiendfyre when he was capable of saving him.

Over the course of eight Harry Potter films, the tension between Harry and Draco grows from petty schoolboy rivals to enemies and eventual unlikely allies in the Second Wizarding War. The boys’ shared disregard for the rules and tendency toward impulsivity makes them more alike than either would ever acknowledge. Their rivalry leads them to be petty and even cruel at times toward one another, but when both have the chance to allow the other to die, they each opt to save one another at great personal risk to themselves.

Which Harry and Draco moment is your favorite? Keep the conversation going over at side.show/geekgroup, and don’t forget to Let Your Geek Sideshow!