This new sixth scale figure features a screen-accurate weathered and damaged Mandalorian helmet and armor, his iconic jetpack with a detachable rocket and firing effect, a skillfully tailored outfit, multiple weapon firing effects, a blaster, a chain code effect accessory, and more! The Deluxe Collectible Set features two different looks inspired by the appearance of the formidable bounty hunter in season 2 of The Mandalorian — giving fans and collectors both the armored version of Boba Fett and a version showing his mysterious first appearance in his black robe.

First, check out the unboxing video for this detailed collectible and find out even more about the Boba Fett Sixth Scale Figure as host Guy Klender walks you through every aspect of the unboxing experience from packaging to posing. See the figure’s articulation, the expertly recreated and weathered armor, the bounty hunter’s armory, and more. Plus, don’t miss the Deluxe Collectible Set’s second figure, featuring an unarmored Boba Fett with even more accessories and features.

Fans were overjoyed to witness the return of Boba Fett in season 2 of The Mandalorian. Thought to have met his demise in the terrifying Sarlacc pit™ on Tatooine™, the most feared bounty hunter in the galaxy is back! In exchange for his legacy armor, Boba Fett ensured Grogu’s™ safety and proved to be a formidable ally in Din Djarin’s™ rescue of the mysterious alien foundling.

The armored version of this collectible figure features a screen-accurate weathered and damaged Mandalorian helmet and armor, his iconic jetpack with a detachable rocket and firing effect, a skillfully tailored outfit, and multiple accessories.

The robed version of the character depicts Boba Fett’s appearance before the retrieval of his armor and features a newly developed head sculpt with a stunning likeness of Temuera Morrison, a masterfully tailored black robe outfit, a gaffi stick™, a cycler rifle, a damaged stormtrooper™ helmet, and more!

The Boba Fett Deluxe Figure Set features all of the items listed above in the armored edition, plus a second collectible figure with:

Once you’ve checked out everything this FIRST LOOK video has to offer, then be sure to bring home this essential bounty hunter to your galaxy of Star Wars collectibles.

Will you be adding The Mandalorian series Boba Fett Sixth Scale Figure by Hot Toys to your figure collection? Don’t forget to Let Your Geek Sideshow and tell us in the comments! 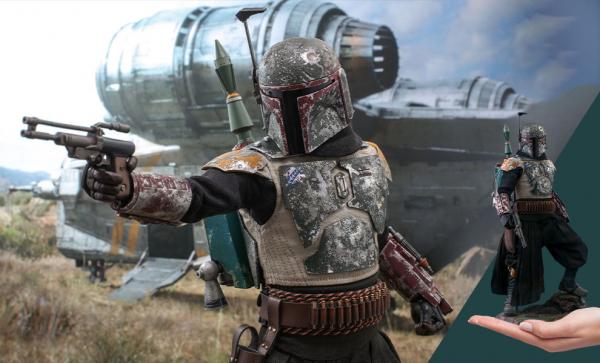 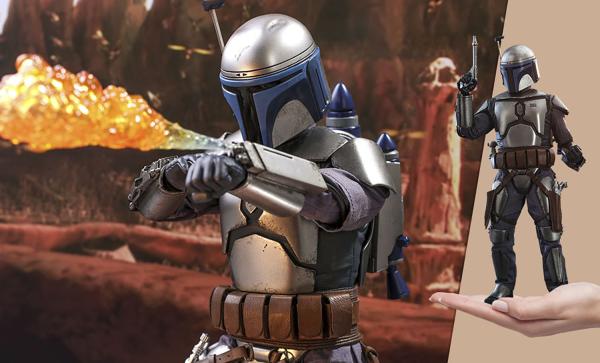 The 10 Funniest Quotes from DC's The Suicide Squad