Since Deadpool’s debut in New Mutants #98 (1991), the Merc With A Mouth has gone through enough evolutions to make Charles Darwin blush. Originally created to be a villain and credible foil for both Cable and Wolverine, the character has changed drastically throughout the years to become something more of a lovably ultra-violent anti-hero.

One thing that hasn’t changed, though, is his sense of humor. Deadpool has always brought the funny, whether through graphic (and gory) slapstick, witty (and absurd) banter, or even breaking through the comic panel’s invisible fourth wall. 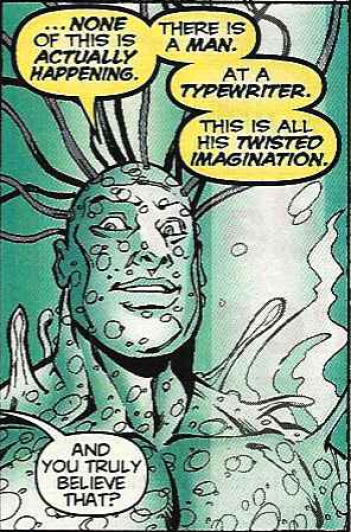 Yes, Deadpool knows he is being controlled by a comic book writer, and he knows the readers are there, watching his every action with glee. Why not give them a laugh or two for funsies?

So in honor of Deadpool Day, here is a short and sweet list with some of Good Ole Wade’s funniest moments.

Wrestling with his identity has become commonplace for Deadpool. Similar to Wolverine, he has been implanted with multiple false memories, to the point where he isn’t quite sure what is real and what is imagined. He doesn’t even know if Wade Wilson is his real name.

So when writer Christopher Priest took over writing the Deadpool comic in 1999, it came as a bit of a shock when Wade discovered that his actual father might be… Loki? Yes, that Loki. The god of lies himself. 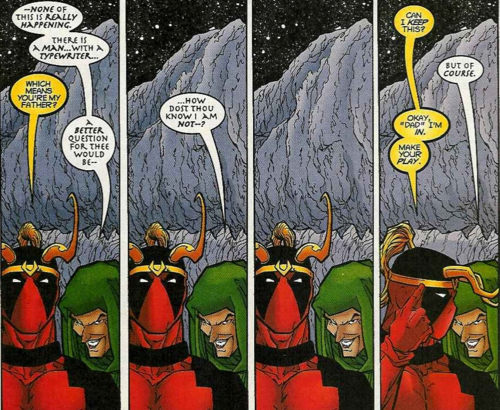 Loki sets it up so that his “son” can steal Mjolnir and bring it to him. Deadpool does so and temporarily becomes the God of Thunder.

Though instead of bringing it back to dear old dad, Wade decides he likes the hammer’s power and decides to try and be a true hero. Shenanigans ensue. 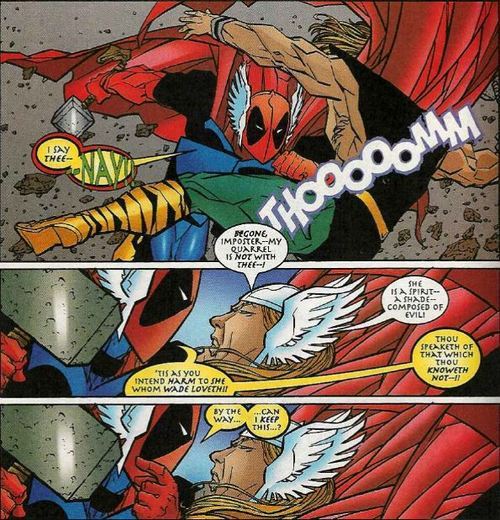 Eventually, the stolen hammer is found to be a fake, but not before Deadpool battles it out with his uncle Thor. Loki’s deceptions are revealed, and all goes back to normal, but not before he curses Wade to look like Tom Cruise for a period of time. Yes, really. 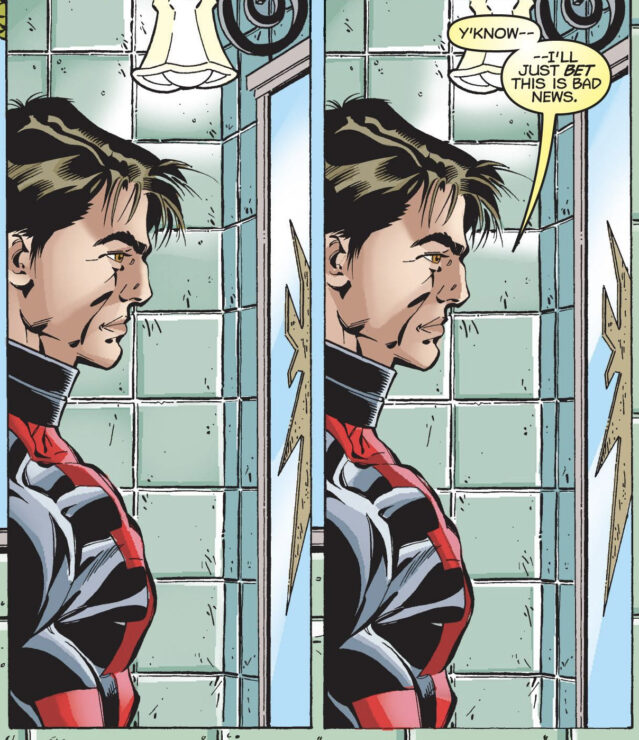 Deadpool has his own roster of friends and foes. Memorable allies like Wolverine, Outlaw, Cable, and Domino will likely come to bat for Wade if they have nothing better to do. On the villain side, rogues like T-Ray and Ajax may not have high name recognition, but that doesn’t make them any less of a thorn in Deadpool’s spleen.

Despite these reoccurring faces, one could argue that Deadpool really shines when he has to interact with someone new. As such, some of his most memorable encounters are with familiar faces that just don’t have a clue on how to deal with him. Writer Gail Simone did just that when she sent Wade on a mission to take out the hulking Spider-Man villain, Rhino.

In their first encounter, Deadpool used a shrinking spray and transformed the giant, gray human wrecking-ball into a Snickers fun-sized version of the behemoth. 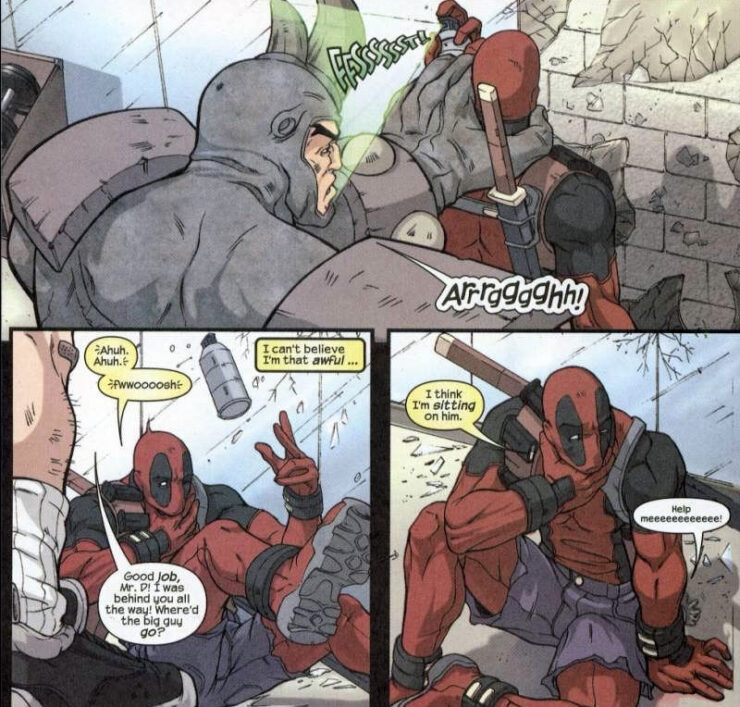 But he didn’t stop there. He decided to keep Chibi-Rhino as his own little homicidal pet and personal keychain (with a hole punched through his horn). He even gave the miniature villain a hamster enclosure to ensure activity and wellness. 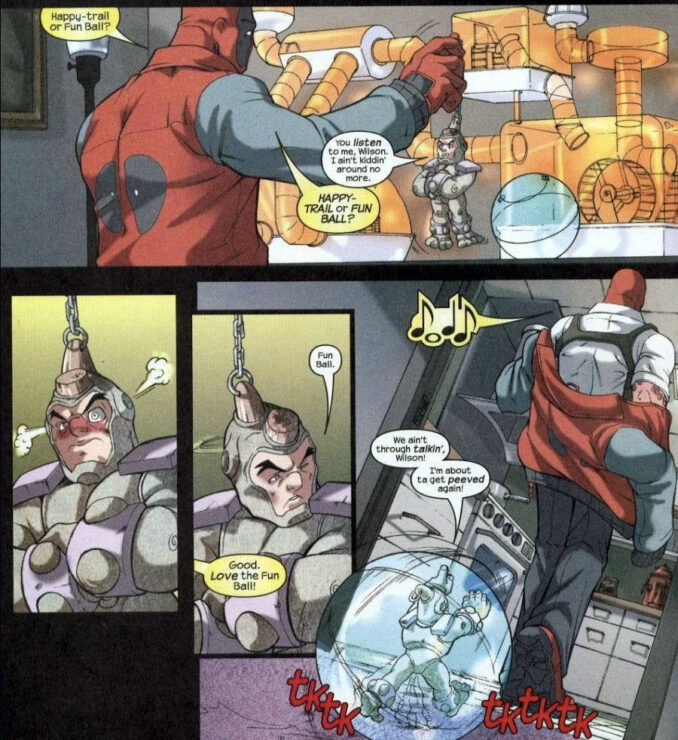 Eventually, Wade got tired of Rhino’s complaining and gave him the proper sendoff… a Viking’s funeral for deceased goldfish.

Joe Kelly’s legendary run on the Deadpool comic has no shortage of memorable moments. Like the time Deadpool challenged Kitty Pryde to a real-life game of Street Fighter. Or the time Wade had to defeat a possessed Captain America to save the world from brainwashing aliens and did it in the most Deadpool way possible. 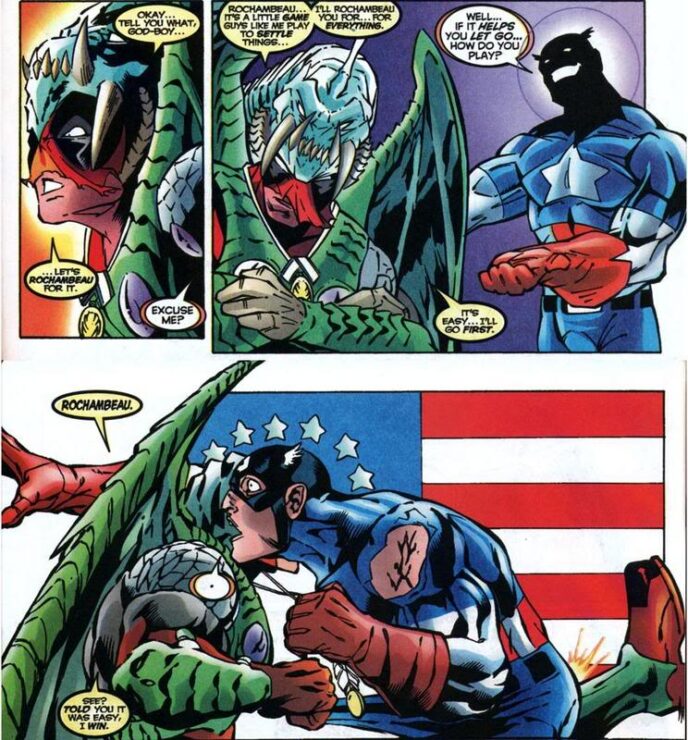 However, it would be hard to top the time Deadpool came face-to-wattle with the villain, Black Talon.

Who is Black Talon, you ask? Well, he’s a little-known magical foe who specializes in resurrecting the dead and can control an army of zombies. That’s not important right now, though. What is important is that he looks like this: 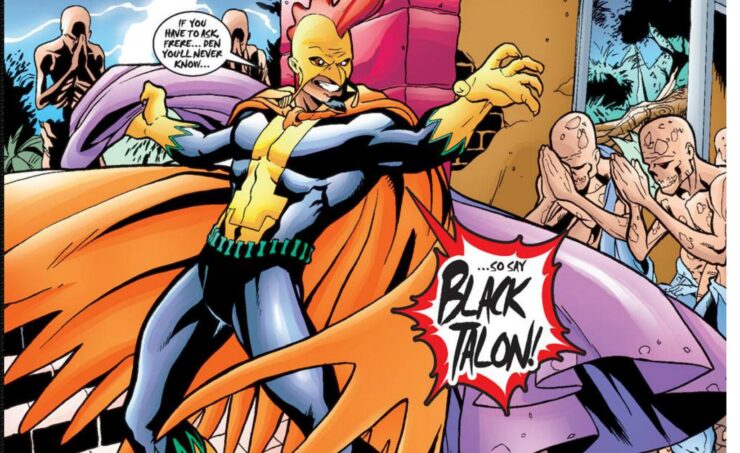 To which Deadpool reacted 100% appropriately… 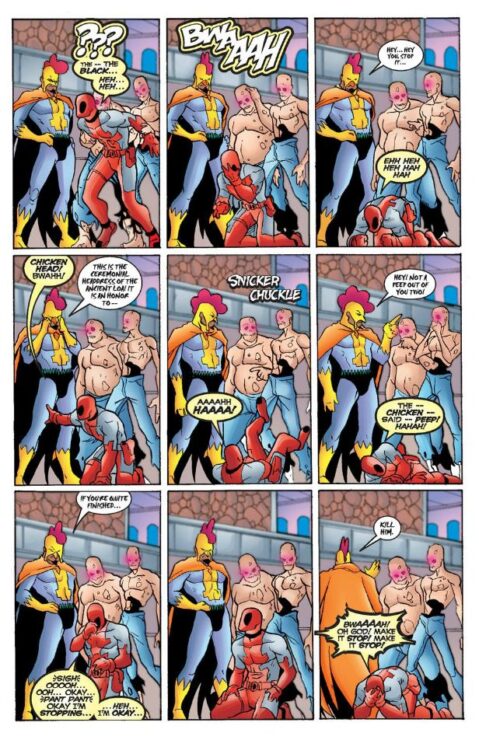 It’s okay, Wade. We’ll give you a minute.

So, those were just a few of many funny moments from classic Deadpool comics. Do you have a favorite? Leave us a comment below and let us know!

Up Next on Unsealed and Revealed: Wonder Woman Sixth Scale by Sideshow