March Sadness – You decide the most epic deaths in film!

After a heated debate among the Sideshow crew, this year’s bracket has been seeded with sixteen memorable movie deaths, which will go head to head in an ultimate fanboy showdown we are affectionately referring to as March Sadness. Starting Monday, March 23rd, your votes will determine once and for all which one stands as the most epic fictional death in film of all time! Let’s take a look at the match ups (click to view larger): 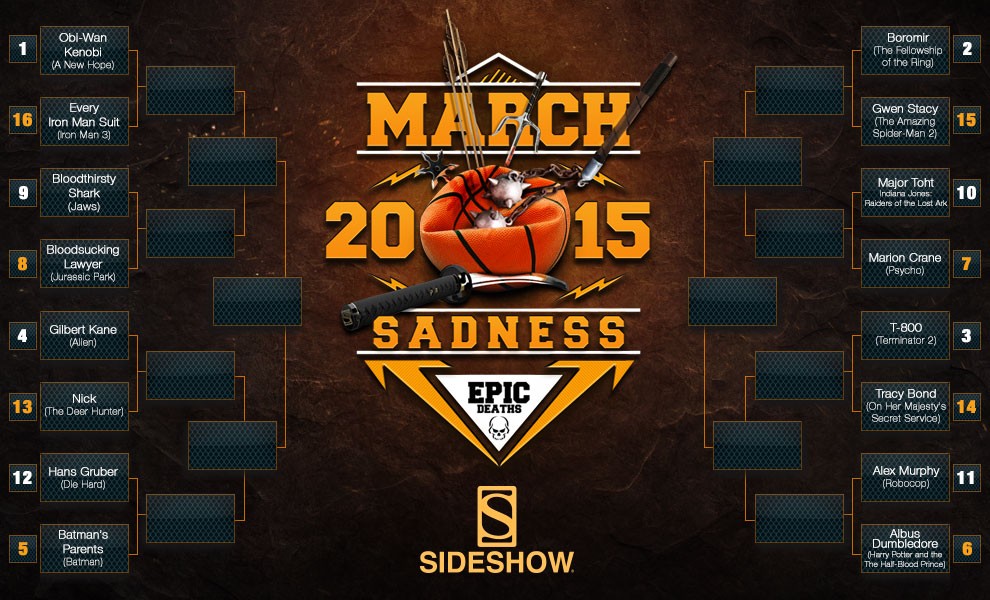 How you determine which death scene is the most memorable is up to you — tear-jerking moments, overall crushing feeling, personal story about the first time you saw it – everything’s open to interpretation.

Round One – Voting has begun!

Starting in the first quarter tree, it’s a battle of sacrifice when we compare Obi-Wan Kenobi becoming one with the Force to Tony Stark’s immeasurable gesture to Pepper Potts initiating the Clean Slate Protocol. In a more gory turn of events, we take a look at the demise of the bloodthirsty shark from Jaws who bit off more than he could swallow versus the bloodsucking lawyer from Jurassic Park and the crappy way he had to go.

In the second quarter, we have an interesting match up we like to refer to as ‘One Last Meal VS. One Last Shot’ comparing the times Gilbert Kane of Alien had to get something off his chest, and Nick from The Deer Hunter had to clear his mind. Below that, we pair up Hans Gruber who died hard, and Batman’s parents, who danced with the devil in the pale moonlight.

The third quarter tree holds a heroic battle of the fallen as we compare Gwen Stacy who fell for the wrong hero, and Boromir…well, you remember how he fell. Marion Crane and the classic shower scene in Psycho faces off with Major Arnold Toht’s demise in Indiana Jones and the Raiders of the Lost Ark, when he literally had his face melted off.

In the final corner, will we see T-800 get a thumbs up for being too hot to handle, or will Tracy Bond steal the win for her wedding day blues? And lastly, we look at two heroes whose legacies long outlived their deaths, as we compare Alex Murphy from RoboCop and Albus Dumbledore from Harry Potter.

Introducing Darth Rimmer and 'Chaos of Cthulhu' – a Game of Unspeakable Magnitude!